This post is mainly for the benefit of those who do not currently follow my Facebook page, where a few of us have already begun a discussion on this. Of course, I’d encourage you to head over there now and to click the Like button if you haven’t done so already!

I received an e-mail from one of my recent cutting board recipients last night that. When I saw the heading, I knew it wasn’t good news and could only assume that something had gone wrong with at least one of the boards I’d made for them. In my mind; at least one board had begun delaminating along at least one glue line. But, as you can see in the photo above; what actually happened was far more devastating!

My heart sank and I felt awful, before the ‘hows’ and ‘whys’ came rushing through my mind.

It looks as though there may well have been some internal stresses within the maple I used, which was of course kiln-dried and, after rough sawing to size on the same day I bought it, I then left it for a period of time which usually allows moisture to escape so that a balance can be formed all around. If you look at the growth rings then you can see that the two blocks are opposing each other. As one would attempt to ‘straighten out’ those lines with the inevitable shrinkage that occurs, they would only end up pulling against one another, which may well have caused the rifts. 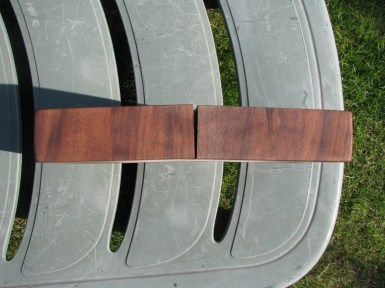 Only this evening, have I noticed that this is one of the two smaller boards that I made for this batch. I’m not sure how or if that affects things but at least a replacement board can confidently be made from offcuts. I’m not sure how feasible a ‘repair’ would be, which is why I’ve offered to make a new one when I have time. Again this evening, I’ve reminded myself of a video that Marc Spagnuolo (The Wood Whisperer) once shot on his own terrifying experience with a very similar ordeal…

So, I feel quietly confident that this board could well settle down after a couple of weeks. Although I’ve not yet suggested this to my customer; in such an event, I’d be happy to ‘refurbish’ the same board in its more-rested state and, of course, I would pay for the costs of postage each way.

This month, I’d also like to make two brand-new cutting boards using a similar contrasting style but of a slightly different design… I’ll doubt I’ll shoot any more video footage of those (I already have two series’ of them) but I’ll keep you updated.

6 thoughts on “Cutting Board Chasm”