My destination for last Sunday’s walk wasn’t going to be anywhere other than Wiltshire. Initially, my sights were set on a Brunel-led walk around an unknown area close to Longleat. Before heeding the weather forecast on Saturday, I was lining up a trip to Lacock, which is surely soon to follow in April. But I wanted to save that one for a clear and consistently sunny day and so, instead, I elected to follow a walk titled the Wessex Ridgeway. 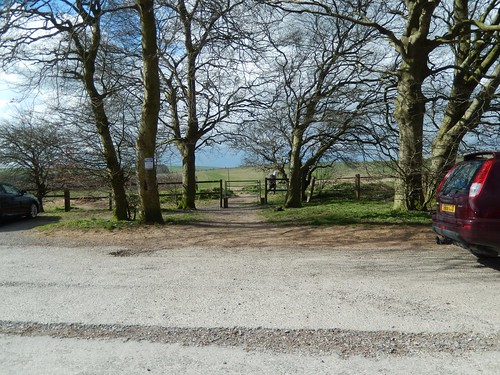 Now, not only was this my deepest expedition in to this part of the county but it was also a debut for my brand-new camera… Before you’ve even put your boots on and laced them up, I can tell you that I was astounded by the camera’s quality of capture through the day.

This walk (available from the Walk West series) begins in a large parking lay-by, just to the east of Avebury (I’m lining up another walk there soon) and along the A4 towards Calne (I town I’m familiar with purely for the boot-full of brown oak I purchased from a local sawmill in 2008). 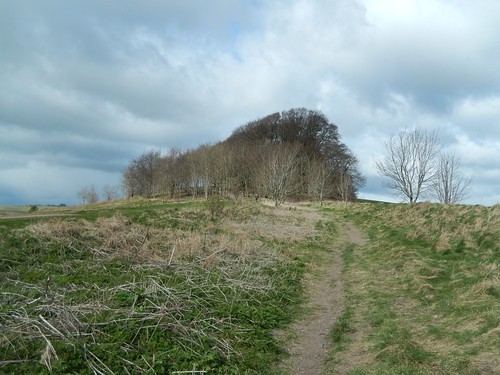 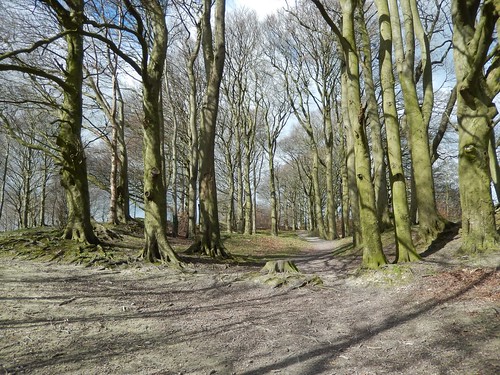 Stepping through that gate in the first photo and, in fact, on the drive south from the M4 near Swindon, I was struck by how level and low-lying the landscape in this part of the country was. It felt like I’d driven off the motorway and submerged down in to a subterranean world invisible to the many who exist above it. 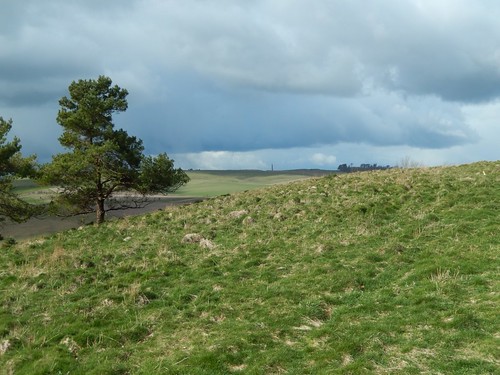 Passing through the trees (my only offering of shelter throughout this walk), I almost caught up with another rambler who appeared to be heading for the same distant tower. 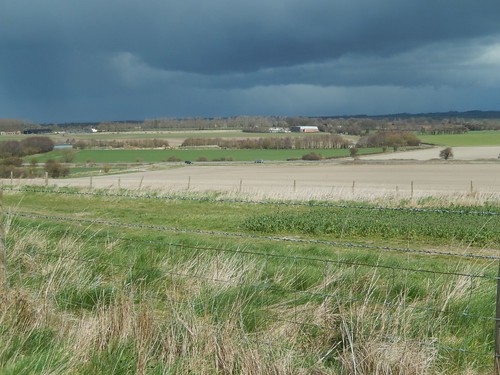 To the north of me, I could only see dark clouds filling the sky. After being forced on to a diverted route from the M32 in Bristol, I’d arrived at the start point a good 20 minutes later than intended. It was late morning by now and I knew that rain was forecast sometime before midday. 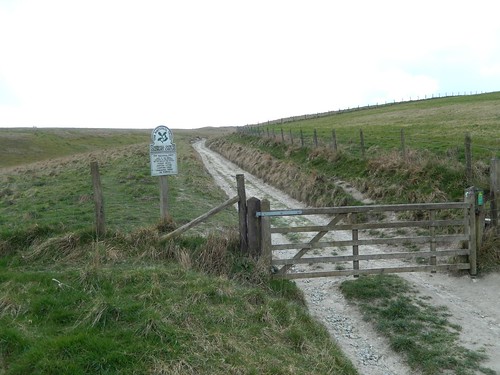 This path towards the tower was untreacherous. It was only the constant biting of the wind (a brief return to winter) that made it feel less than entirely comfortable. Turning left to go up the hill, I arrived at a National Trust sign for land marked as Cherhill Down and Oldbury Castle. 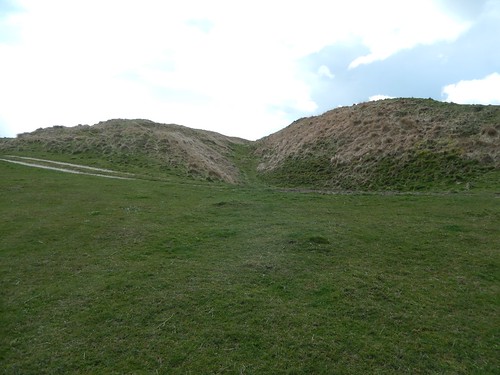 Rather disappointingly, Oldbury Castle refers to a large ditch with barrows either side; more befitting the site of an old hillfort than anything else. A great place for walking and gazing over the surrounding landscape, nonetheless. 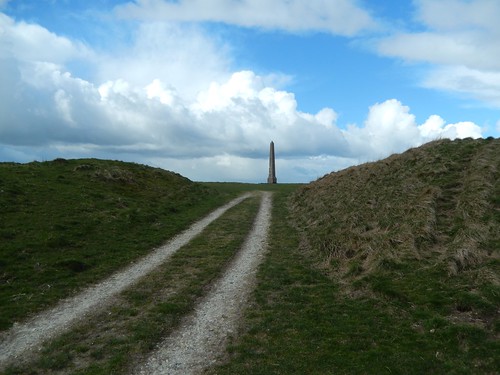 Leaving the broad track to climb steps cut in to the side of a brief muddy ascent, Lansdowne Tower rose high ahead of me. 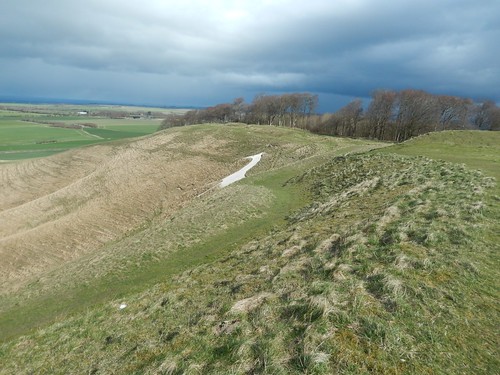 But instead of heading straight there, I contoured around the hill to the right, in order to snatch a passing glimpse of the Cherhill White Horse. 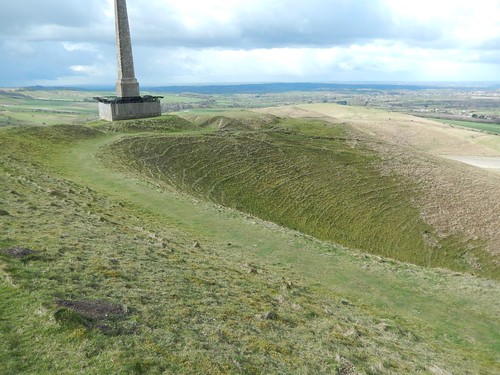 It was hard to get a clear view of the chalk-carving without taking a great detour from the route I was following. Without further hesitation, I continued to the tower, which is surrounded by scaffolding in order to preserve the wind-beaten structure and to keep passers-by at a safe distance. 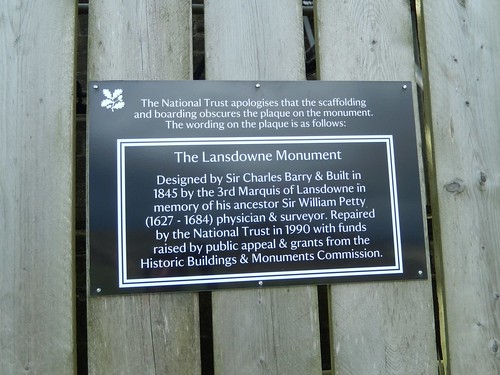 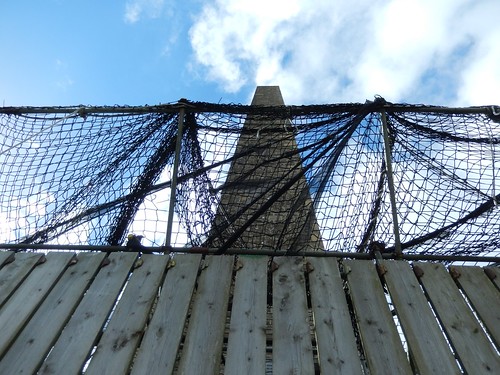 From the base of the tower, I could spot my next destination far and away to the south, in a pair of radio masts. 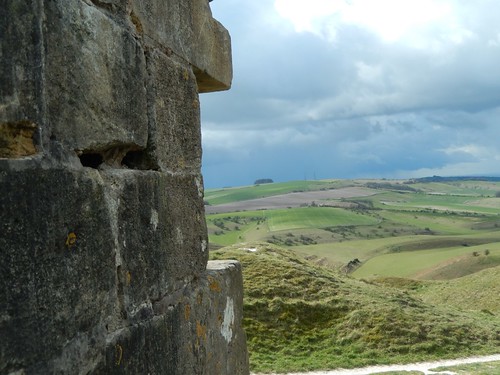 I felt fortunate to be heading downhill from here, as the southern entrance to Cherhill Down comes at a much steeper gradient. Looking back up to the tower as I followed a level farm track, I noticed those dark clouds chasing after me… 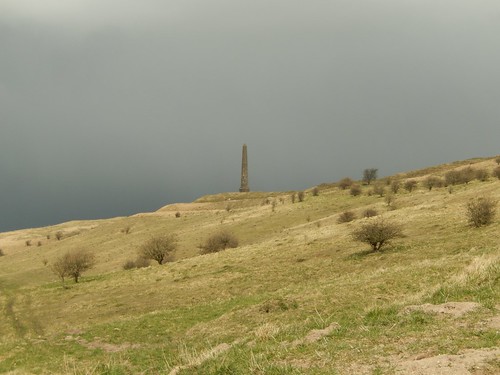 As I found out very soon after, they were full of thunder. While I didn’t spot any flashes of lightning, I couldn’t ignore the strikes of snow-like hail raining over me. I was quick to wrap on my waterproof coat but I foolishly walked on before adding the trousers. 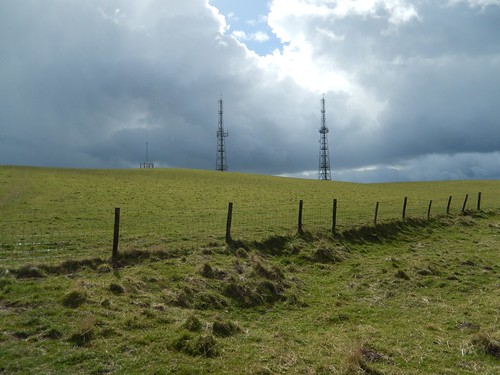 As these clouds continued to shadow me, with intermittent rain, I kept my camera under wraps until the short but steep climb up Morgan’s Hill to the pair of masts. It didn’t seem to take long at all to get there. 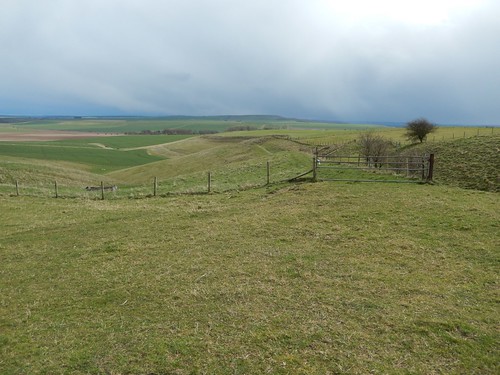 From here, my objective to take me beyond the halfway point in the walk was to follow the Wansdyke; very simply, a ridge-and-ditch that I think runs all the way to Sidbury Hill – but don’t quote me on that!

Looking ahead, I was constantly reminded of scenes I’ve seen of landscapes much further north… I may be mistaken but I believe I’m talking about the Dales, both in Yorkshire and also Derbyshire. There is so much land to explore in the UK, I can begin to wonder whether I’ll ever get around to seeing even half of it. 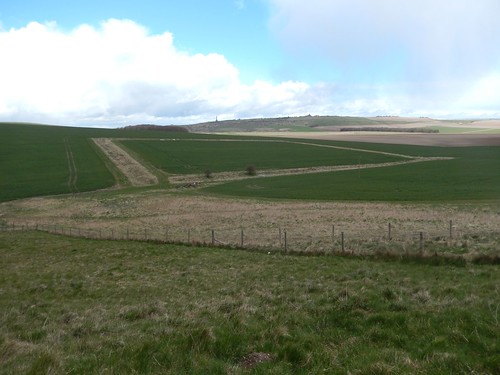 Closing in on the midway point, I could look back to the now-distant tower and marvel how much energy I was able to retain, away from the hills and high-rises that litter the land of other counties. 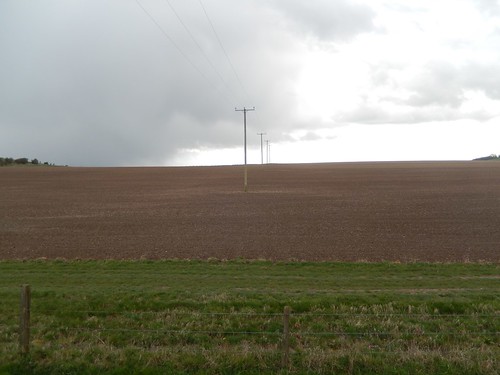 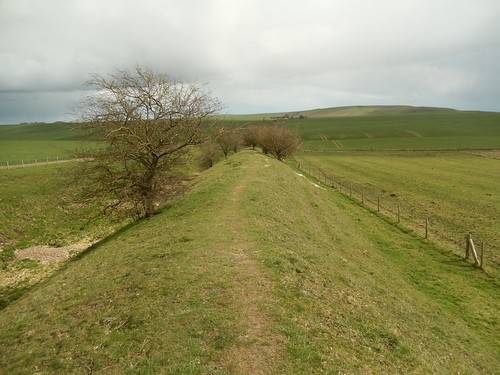 Crossing a major road, the Wansdyke continued, with blue sky emerging all around. 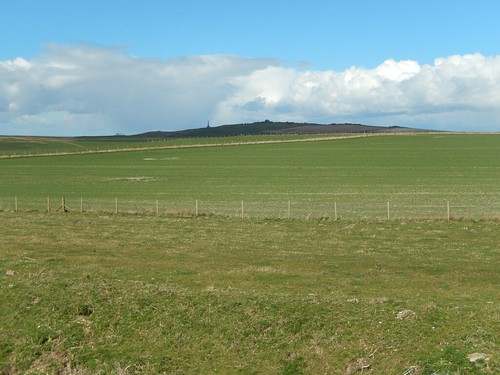 A little further ahead, I noticed a flock of sheep occupying the ditch down to my left – I’d chosen to stay on the ridge-top not purely for the views but also for the improved feeling of comfort within my boots. 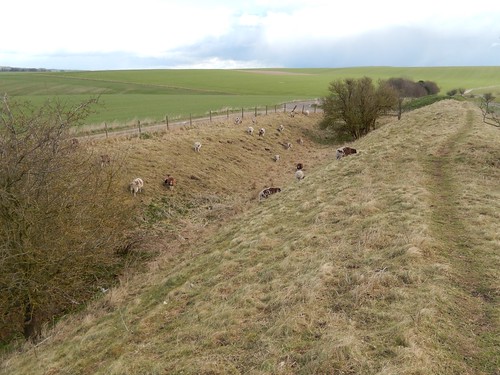 I’m usually quite wary around these particular breed (and often mistaking them for rams…), with the horns and often alien-like eyes… As sheep, they often remain timid and scurry away. But, on this one occasion, as I climbed a stile to continue over a track cutting across the footpath, one of woolly ones eased its way over to say hello! 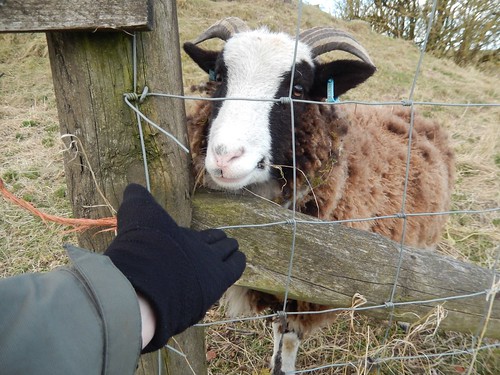 With the ‘official’ hour for lunchtime having passed long ago by this point, I decided to stop and eat for a few minutes, in an attempt to better look after myself.

All I can say about then next photo is that I was glad to be walking in the opposite direction!!

It was at this point that I left the Wansdyke path.

From here, to be honest, the track was well rutted and the walk was plain in comparison to all I’d experienced previously. I’ve just checked and the Wansdyke path continues to Savernake Forest near Marlborough. That might’ve meant doubling the walk on this one, which is why I’m relieved I didn’t attempt to follow it any further (without the aid of an OS map). 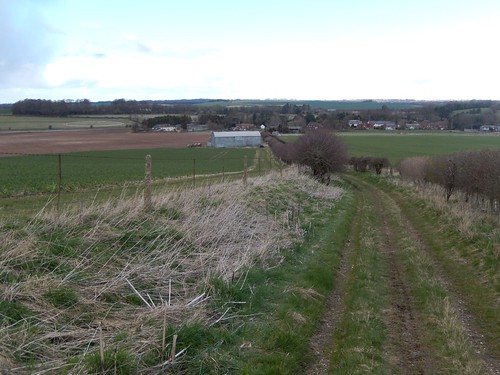 My destination was Beckhampton and from there, I could follow the A4 west to return to the car park. 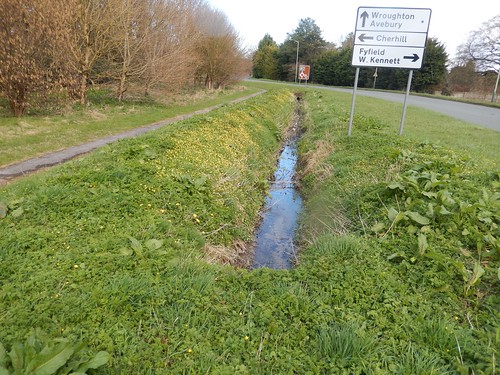 On a shockingly cold day following recent temperature hikes, this road-side display was my only sighting of spring from throughout the entire walk. 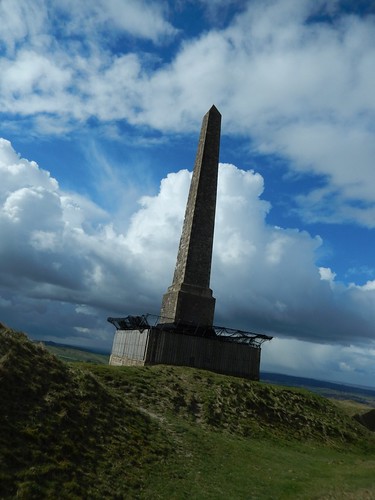 I do hope you’ve enjoyed following this walk and that your as delighted with the results from my new camera as I am! Naturally, there are a bundle of excellent photos that didn’t make it in to the final cut for this post and if you’d like to see my complete set of photos for this walk, please click here.

Thanks for reading and get outdoors! 🙂

6 thoughts on “This is Wiltshire”