After four months of frequent to my mother’s home, with black bags full of my dirty laundry; I jumped in and bought myself a washer/dryer this week. I’ve taken that extra step closer towards independence. For the very first time, I own a washing machine and this post is going to involve my initial impressions and remarks from its first use.

– it arrived within three working days from Germany and, as I was out walking, it was kindly taken in by a neighbour for me to collect later and at my own convenience.

This is the kind of item I had believed would only exist inside my dreams… It doesn’t need to be plumbed in and while the manual input and draining of water may be a burden to some, it makes the unit entirely portable, should I decide to move home again before the year is up.

If you’ve seen or read about my kitchen then you’ll know that I like to keep my appliances lightweight and portable. That is precisely why I was hoping to find a washer/dryer like this.

If not to have bought this model on quite an impulse, I’d have almost certainly gone down the rentals road. But at £5/week for the average ‘small’ machine, I wasn’t convinced that it was going to be my best option. Still, I was liking that more than the thought of buying a second hand washer with the liabilities toward breakdowns and imminent repair costs.

I first came across this TekTake model on eBay – indeed, I think I was searching for a “mini washer/dryer“. I also found a smaller model from a different brand and one of similar size from a competitor. All I needed then was a verdict – and I knew that the customer reviews on Amazon.co.uk should be my next stop.

Positive comments and near-five-star reviews far outweighed the minor negatives. With a 4.5kg washing capacity, it is only going to be suitable for small loads and, as a single person living alone, I believe this can work quite well. Some seem to regard these machines as being more economical that the conventional type. 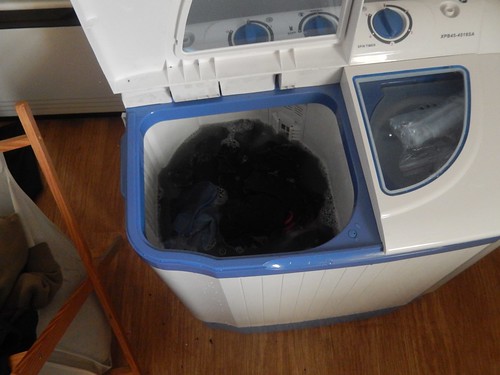 My first load consisted of a batch of underwear and T-shirts. I was reluctant to throw my bed sheets in without having first performed a more ‘average’ test. I set it for 9 minutes, as there was a comparatively full load inside and nothing looked particularly dirty. I soon found that it’s very quiet in use, won’t shake the room (unlike the one belonging to neighbour’s above) and I think the weight of the water inside helps to ground it, nice and steady without the usual tendency to walk away while in use.

I can be very critical of the instruction manual, as it’s a poor translation (another product with Chinese origins, yes) and, from what I can decipher, it isn’t as informative as it could be. For someone more experience with washing machines, it’s probably dead simple. But, even with my limited knowledge I was able to ask it to do what I required without much head-scratching at all. 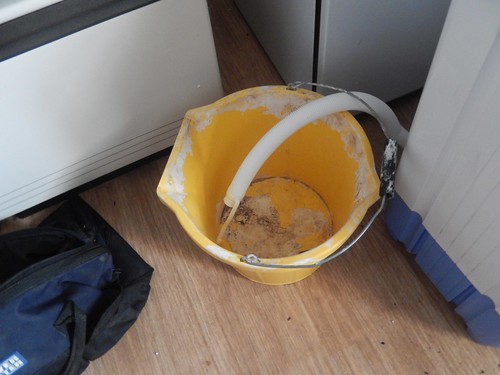 After the first washing cycle, you’re required to place the wet items in the right-hand drum of the dryer, before then repeating the process for a complete wash cycle (wash and dry; wash and dry). They seem to advise you to drain the water from the washer in between – now, I’m going to join many other reviewers in criticising the manufacturers for the inappropriate length of this flexible drainage hose. I don’t know about German or Chinese homes but, here in Britain, we don’t tend to have drains in and amongst our floorboards so, I elected to use a bucket, which was then emptied in to the shower.

But I did not drain the washer immediately after the first wash. I recycled the same (now murky) liquid (albeit it with a fresh pack of detergent) and I do believe this helps to keep the quiet-running dryer from propelling this otherwise lightweight unit from taking off towards the ceiling. 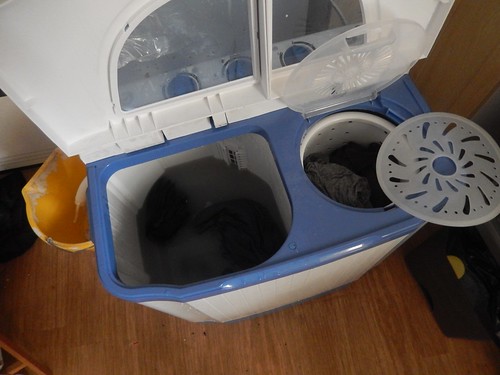 This dryer has a load capacity of only 3.5kg, which basically meant that I wasn’t able to try the entire 4.5kg of contents within a single spin session. So, I tried to divide them up in to halves. But I was pleasantly surprised by the effectiveness of this spin dryer. My clothes weren’t immediately ready to wear or anything (it was only £90 brand-new). They felt slightly damp to the touch and I was confident that they could then be hung on a rack in preparation. 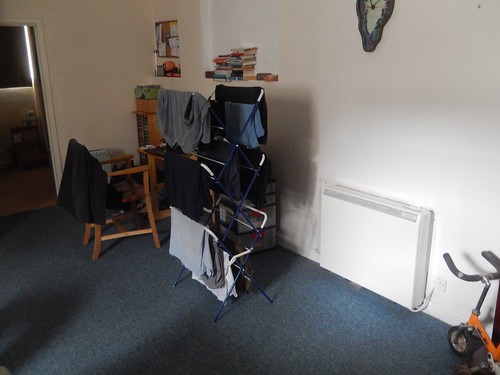 Even after more than 36 hours, my clothes hang here, still waiting to shed those final ounces of moisture. I think my heating may be responsible, as I currently have it on the minimal settings, with summer now only weeks away. Still, it’s a great improvement over hanging very wet clothes, which can apparently lead to condensation issues. I do wonder now, whether a third and final spin might be enough.

You can see the ‘H’ defining the highest level of water to be filled in the drum. Medium is about halfway up the grill with ‘Low’ residing beneath the lowest of the vents. 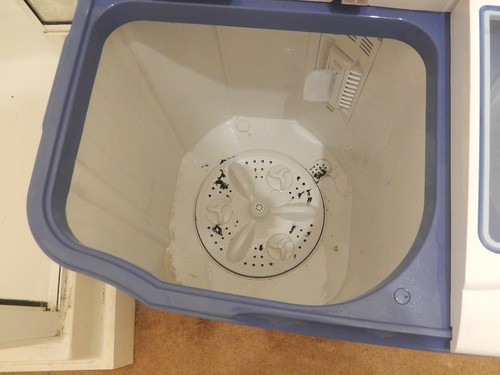 Had I remember to fit that filter before the maiden voyage, there might well have been less hair and fluff to clean from the base of the drum, after draining.

Draining the final 2lt was more of a pain than I’d considered. There is no pump to disperse the excess water from inside. You simply turn a switch and I presume this opens some kind of valve that leads to the flexible hose (you can do it with the power off). This hose feeds directly from underneath the washer/dryer and to correctly obey the laws of gravity and physics; ideally, it needs to be positioned above the drain (in this case, my small shower).

Now, on this one occasion, I was quite satisfied with tilting it over the plinth until the final drops of water had left the tube. As more of a long-term solution, I would like to mount this unit on wheels, so that it can be moved a lot more easily (especially when loaded with water). This would also keep it at a higher level for more efficient drainage at the end of a wash-and-dry. 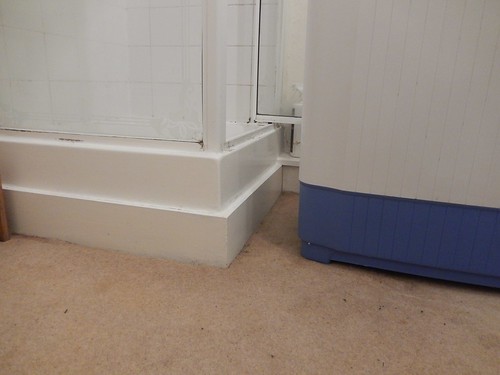 But, as you’ll from the photo above; this currently means raising the unit by a good 8in-9in – half of which I’m sure I could  account for with a pair of reasonable castors and, say, a plywood base. If you have any other thoughts [a tilting base?!] then please do feel free to share.

I thank you for reading and I do hope this initial overview will be useful to others because I was unable to find much information myself. But for a single person who’s prepared to do a bit of manual work and to respect the limited capacities of such a machine… I believe it could be a fine acquisition and addition to my range of kitchen appliances.

3 thoughts on “My First Washer/Dryer”