While it may’ve been my birthday eight-days ago, that Monday was also the day in which I decided to clear out and close the door on my first workshop for the final time. A previous weekend had seen the majority of my tools and kit tucked away in to self storage. But I’d left myself with a floor-covering off odds-and-sodds to gather or give-away. Somehow, prolonging the inevitable and procrastinating would make it feel like I wasn’t having to let go just yet…

Because of such of undesirable habits, I found myself with nowhere else to dump these items in such short notice and so, here they are, on the carpet of the one-bedroom flat within which I reside.

My belief is that it should now be a lot easier to sort through what is necessary and what, quite plainly, is not. 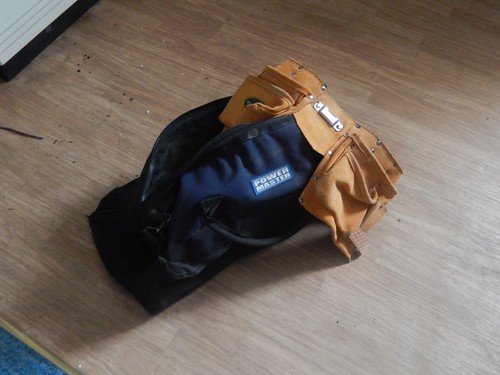 Over this first weekend and, once again, with thanks to Freecycle, I’ve been able to pass on a couple of items (pictured above) that I haven’t really used since 2006. I’ve been able to live with them for the same reason that so many of these items have survived within my possession; because they’ve always been hidden away within my workshop.

It’s another one of those situations where I find it essential to break the pile down in to segments. So, this week, I’m proposing to shift two more items and I’ll repeat that the following week. Two items every seven-days is manageable.

I’m not currently sure of what I’ll do if I cannot find a taker but if it’s something that offers me no use or value then I’ll have less qualms about binning it, after having first tried a better way.

It would be easy and pitful to work through this amount, placing prices and valuations on the head of each. But that would only slow and ultimately halt my progress. If I’m prepared to put a price on something I’m looking to offload then, to me, that suggests it is something I would rather keep hold of. If I haven’t used it for eight-years then I’m highly unlikely to need it tomorrow morning.

Elsewhere in the flat, there are a few other items that I’ve not photographed here. Some of which have a sole purpose to serve first of all but, once that has passed, they’ll either be moving on or finding a better space for hibernation.

But perhaps for the rest of April, there’s going to be one area of carpet in my home that remains un-vacuumed!!

Thanks for reading and keep clearing that clutter!