It’s almost time for me to share a recent walk across the Quantocks but before I get to that, I need to share my latest battle in the fight against clutter. 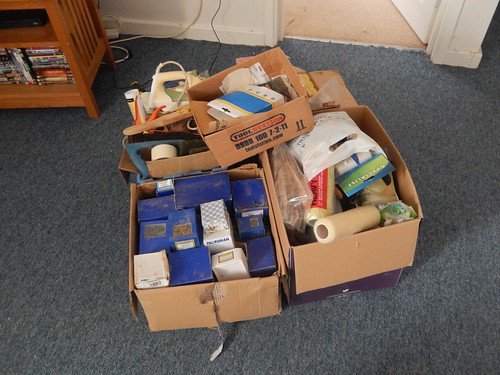 These boxes have been with me for almost an entire month, now. They are the remnants from my workshop clearout; the leftovers that I’d intended to sort through before the move, so that I could decided what (if any of it) was worthy of a place in my storage unit. Instead, they’ve been consuming floor space, adding dust to the environment of my home and when you’re having to walk with consideration past this items in a rather spacious one-bedroom flat, well, it does begin to wear you down.

Almost simultaneously, I’ve found myself lacking in the desire to keep on experimenting with meals in the kitchen. My diet’s suffered a bit and, while I could probably site several others causes, there’s no denying that cluttered spaces and constant feelings of congestion can have an effect on your mental health.

With a weekend of thunder and rain forecast, I set myself the task on Saturday of beginning to put my latest plan in to action. 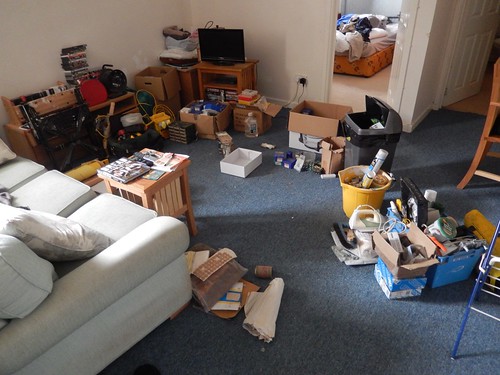 This is a very pro-active photograph, in my opinion. You might be able to see how I’d begun by sorting the items in to various piles or collections – DIY stuff, screws, bolts, non-essentials and keeping a bin handy just in case.

I found lots of bolts and things that could easily be dumped in a metal bin on my next visit to the recycling centre. It didn’t take long to fill my last bucket by two-thirds. That, in its small way, felt like an achievement, even though I still need to complete the action of disposal.

Beyond that, I very quickly began to procrastinate after staring at the great quantity of screws sat infront of me.

I repositioned the slatted blinds by the kitchen so that they’re now closer to the window panes; I also set my bedroom roller blind black so that it’ll hopefully reduce the amount of light entering in the early mornings; I tinkered with the locks on both my bedroom and bathroom doors; I looked at filling holes in the walls in preparation for painting (ironically, I’ve also spent the past month avoiding that)… 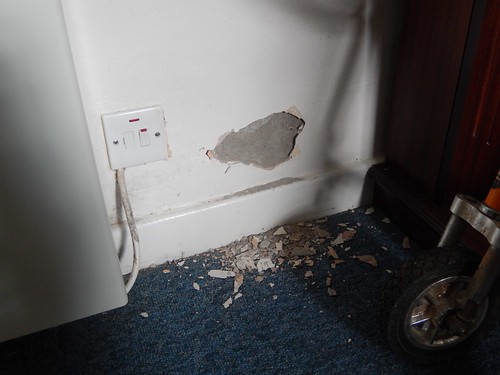 That’s when I realised that the plaster is very fragile in spots just above the skirting on the rear wall. It also feels ‘hollow’ and flexible in places, which suggests that there might be damp problems. I contemplated patching it all up with wood filler but then, the idea of sorting screws seemed more appealing… This, however, looks like another job for the landlord! 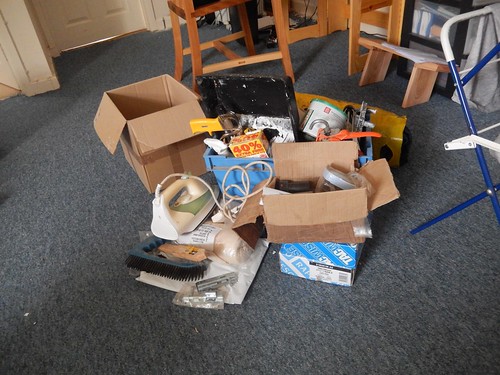 By the time Saturday had come and gone, I did at least have my collection of DIY tools ‘organised’… These shall remain separate from my woodworking kit – the blue box is largely filled with paint brushes, sealant guns, fillers… You get the idea. I managed to empty that large brown box while the smaller stack in the bottom-right corner are supposed to be with my router table in storage. 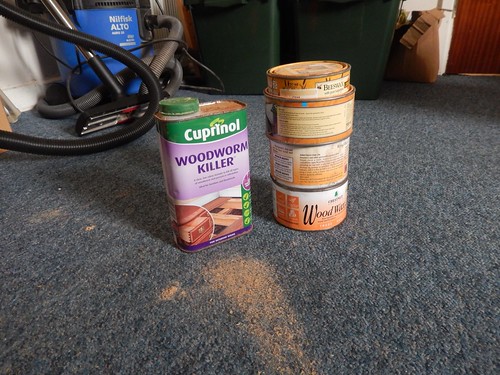 These old tins of waxes can be disposed of on my next visit to the tip. I haven’t used them for several years. Therefore, I’m not going to need them tomorrow! 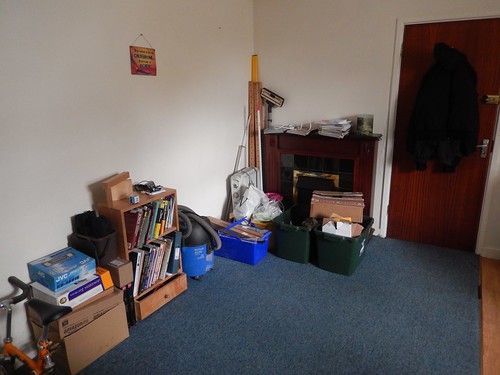 I then decided to rearrange the gathering of items in the corner beside the door. My intention was to drag that electric fireplace out and in to the hallway but, when I realised it was too heavy for me to shift alone, I tucked it in against the narrow surface of the wall, where I can still use it as a mantlepiece of sorts. Those items to the left of the bookcase are currently being filtered through eBay, if they’re not already on Freecycle.

It wasn’t until Sunday when I got the hardest part of this task done. That was a very wet day, where the preceeding 24 hours seemed to be excessively windy more than anything else. 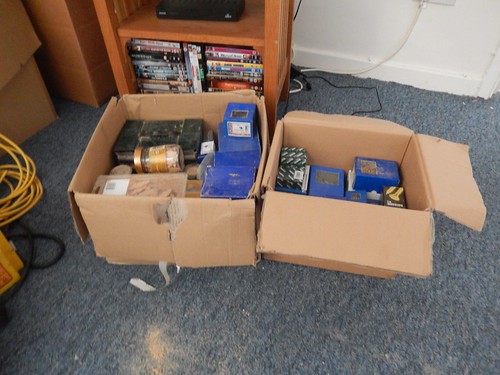 I managed to reduce my ‘needs’ to fit within these two boxes. As you can see, neither one is entirely full. They mostly contain the sizes and bolts and screws that I commonly use (along with my brass screws, which require quite an investment for a humble fixing). My biscuits are also in there (the non-edible ones, of course). 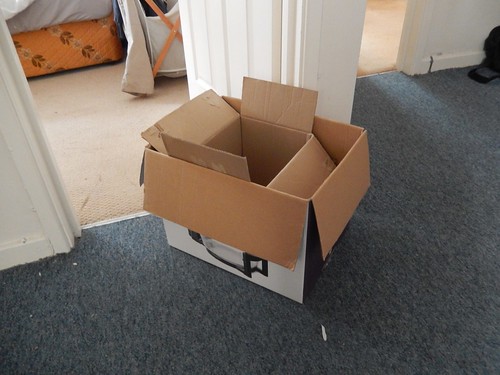 I’d emptied two boxes by the end of the day! 😀 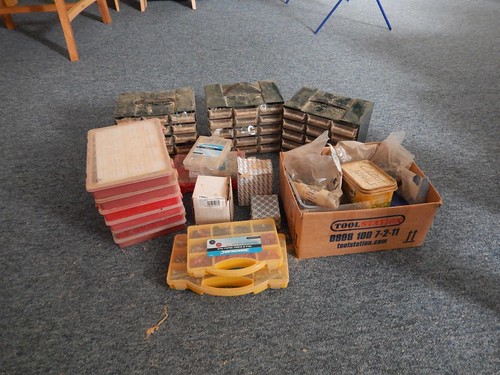 These selection packs always used to seem like such a good idea to me. But in reality, I’ve never needed to pinch more than a handful of one particular bolt-size for a single project. I believe we are tempted by these things because we do not know or cannot decide upon what we want. If we can determine the items that we need then we’ll realise a lack of purpose in the rest.

Those green drawer-storage boxes seemed like a good idea when I saw them as a job lot on eBay. But the drawers are so small, you feel compelled to fill them with something and, quite often, it’ll be those items that you bought to be used only once or, that incorrect purchase that you couldn’t be bothered to return and had instead decided to save for a long-awaited rainy day.

It’s clutter to me. But that’s not to say that someone else couldn’t make use of it. 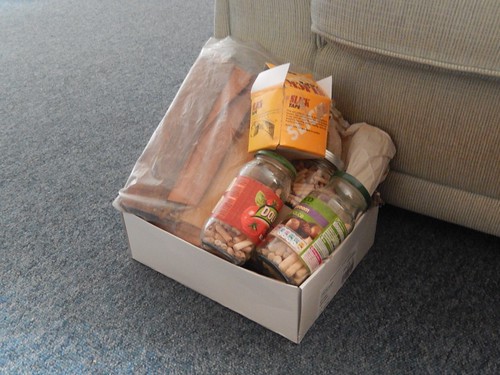 I also created a pile of wood-specific bits that I’ll be giving away.

It would be easy for me to look back on this weekend as ‘a waste’ for the lack of walking (with only one month left for training) but I’m pleased to be able to turn around from this seat and to be able to admire the space I have created, if not restored within my home. My clutter feels under control and somewhat organised. At the very least, it’s ready for the next stage of disposal, not to imply that it’s an easy step.

Thanks for reading and only keep what you truly need! 🙂

One thought on “Screw You Clutter”