This is a walk I completed on Good Friday and my first solo venture down on to the Quantock Hills; almost a year to the day when I joined the walking group on a trek across Exmoor, a few miles further west along the coast. I have been meaning to write about this ever since but a couple of items have held me back… One being the time it takes to sort through and organise my photos (having snapped over 200, I then uploaded 140 to Flickr!) but more recently, I am having keyboard problems where, for example, I have to avoid using all apostrophes and I can only create an open bracket by holding the right shift key.

But I will get there! 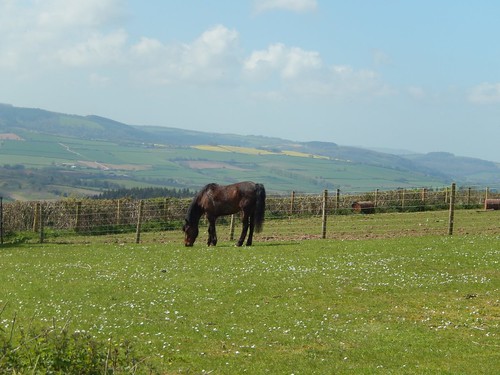 You can find the guide for this walk available online (The Quantock Greenway) and it is the same path that I set-out to follow. This first stretch, across the northern section of the hills, equates to 21 miles in total. Later this month (and again, in preparation for the 30-mile Mercury Mendip Challenge on the 1st of June), I’ll be driving south to complete the southern stretch, which tallies in at around 18 miles.

Due to time constraints and issues mentioned at the top, I have now decided to split this first 21-mile section in to 2 parts. This post will guide you from Holford to Crowcombe via. Great Wood.

It begins in the village of Holford, towards the north-eastern corner of the Quantocks. You’re given the option to start from one of two points and, setting off bright and early at 8.00, I arrived at Holford Green by 8.50 and raring to go!

I’d previously considered this stretch of Somerset to be too far from home. In actual fact, at under one-hour of driving, it is closer to home than the Cotswolds, of which I have already visited a handful of times. 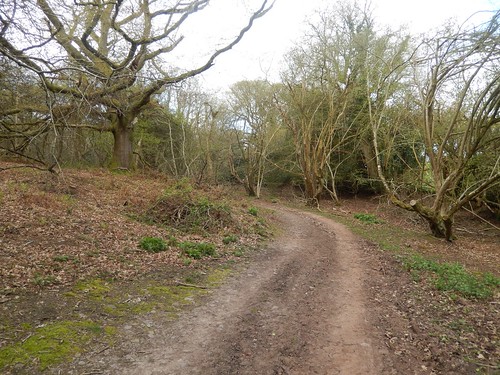 Leaving the car park with only mountain bikers for company, I followed the guide back up the road and then via. a series of waymarks before arriving at Woodlands Hill, which is an alternative starting point for this walk… This was all after I began by heading in the wrong direction along the road – I don’t think I had quite managed to get myself so confused at the very start of a walk before! To be a little critical of the author, I did find that some of the directions were not as clear cut and those I’ve grown accustomed to. 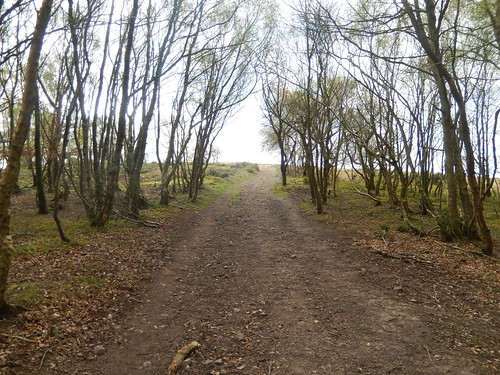 There was a slight incline on reaching this point but from here on, it continues up through the woods until you emerge somewhere up on top of the northern hills. 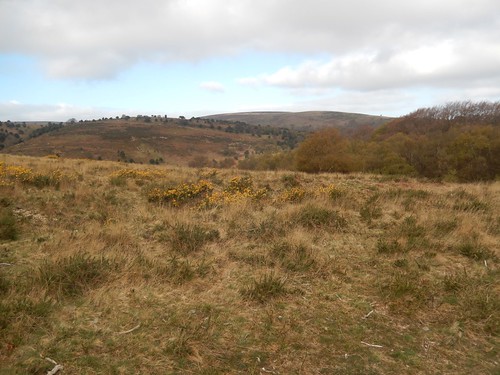 It was almost as if I had somehow emerged further north up on the Mendip Hills… To my eyes, the landscape was suddenly very similar. I was half-expecting to see the trig point up on Beacon Batch, not to mention Crook Peak! 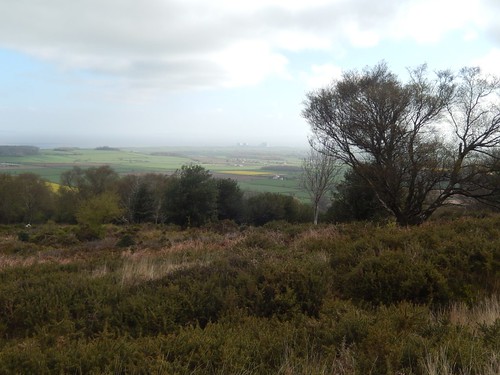 To the north, you can sot Hinkley Point. 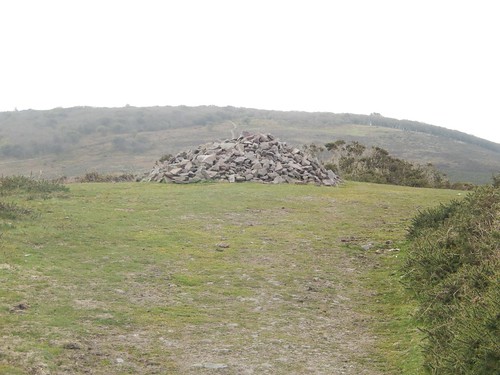 Nearing the summit of this first hill, I noticed an unexplained pile of rocks. Anticipating the site of volunteers building a dry-stone wall(?!?), I have since learned, through Instagram, that this is in fact known as a cairn. 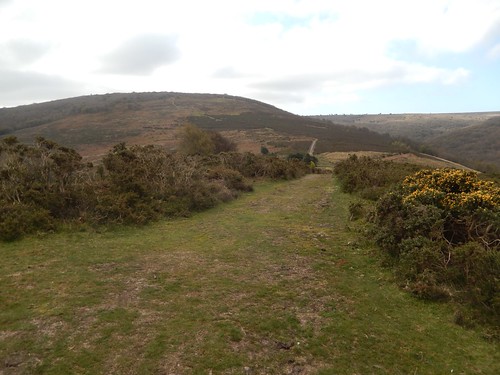 Beyond, I could see what I assume would be my next challenge in the hill fort known as Dowsborough. This walk appeared to be starting in just the hilltop manner that I had hoped for! 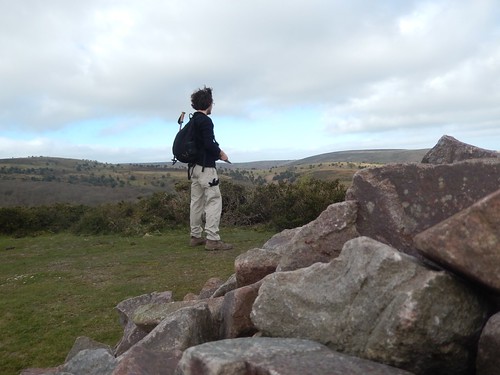 But instead, you are directed to change direction upon reaching a waymark posting at the foot of the hillfort. The guide says to head west (turning right) but the waymark points left… This was an error I was proud to have spotted. With only a printed screenshot of the area to accompany me and the written guide (I bought the wrong OS map), I could still spot that Five Lords, as mentioned ahead in the text, was definitely to my left and so, I continue to the east along a permissive path. 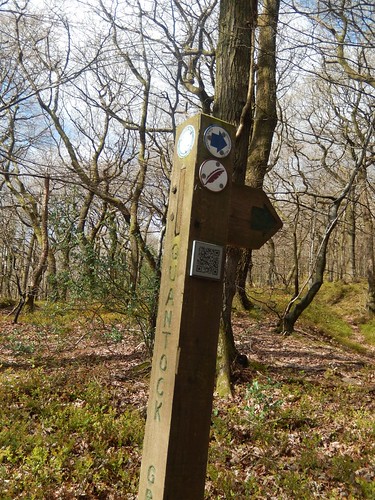 This led me along a combe track that emerged on to a smooth but quiet road. There were sheep grazing directly opposite and a pair of horses further along. What most surprised me though was the inclusion of a scannable QR code on this waymark post along with several others. I do suddenly regret not capturing it on my phone. I wonder whether these are becoming more common around our countryside? 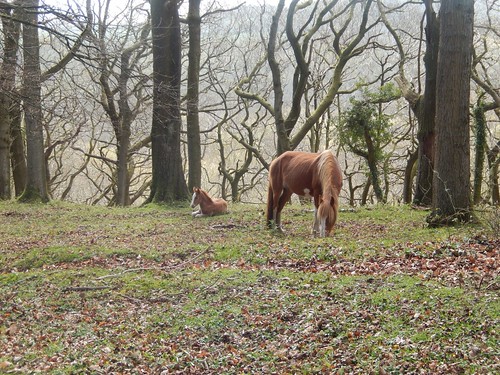 Continuing downhill to where the road bends left, you leave the tarmac via a gate a descend along open fields. 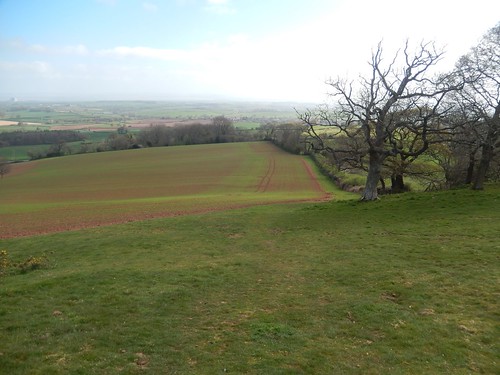 This path now leads you in to Bin Combe and over a ford that, oddly enough, runs straight across a residential road. 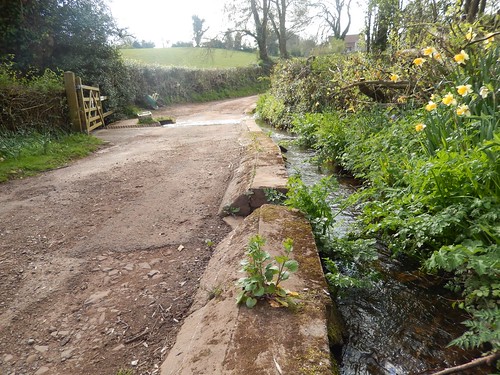 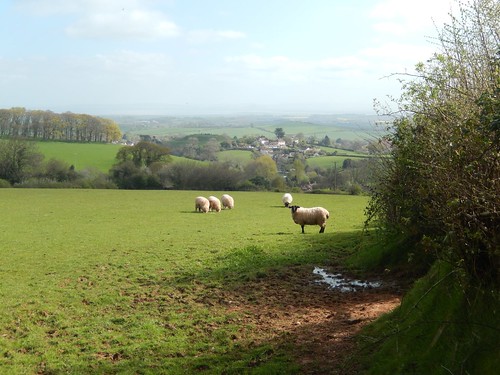 At the top of this road, you reach Bincombe Green, with a rather generous and inviting thorne made of stone. But only a few miles in to this walk, I was not going to concede and sit down.

Down a couple more lanes and it was time to head across further fields and on to Great Wood. 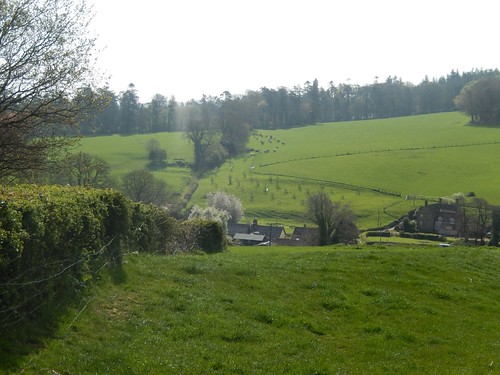 Before I could even spot them, cows from a field further up the next hill were making some commotion. I guess it was feeding time, but I was mostly relieved not to be heading in that direction! 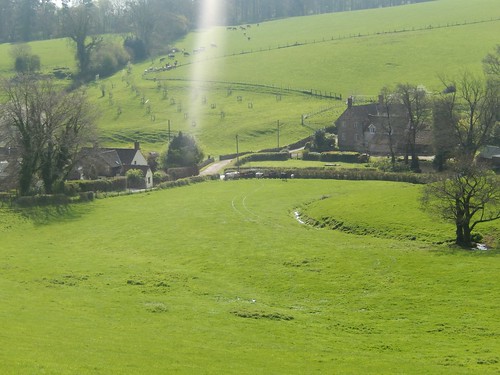 Just when I had expected to have avoided them all, I spotted a gathering in the opposite corner of the same field I was walking though, moments before I reached the exit. I think only one of them spotted me though. 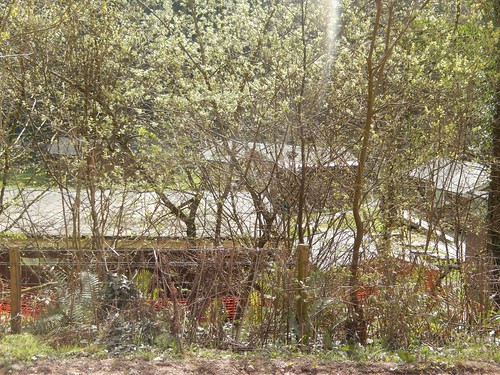 From there, you basically follow a wide track (suitable for road traffic) in to Great Wood and on to the cark park, which is a short walk after the private camping site to your left (ie. they have lodges available to rent, as opposed to space for you to park your tent).

That marks the completion of the first 5½ miles. From here, it was time to head west and on towards Crowcombe. 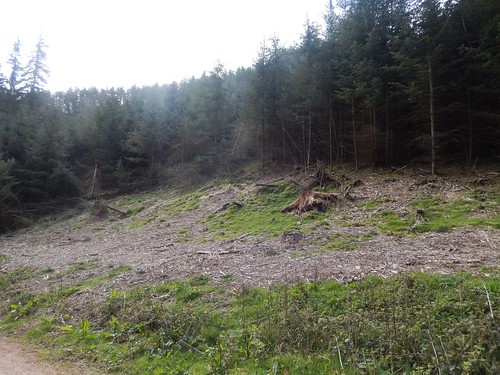 From the car park, the Quantock Greenway bends back on itself before beginning to climb uphill. There was a second point following this guide that confused me… 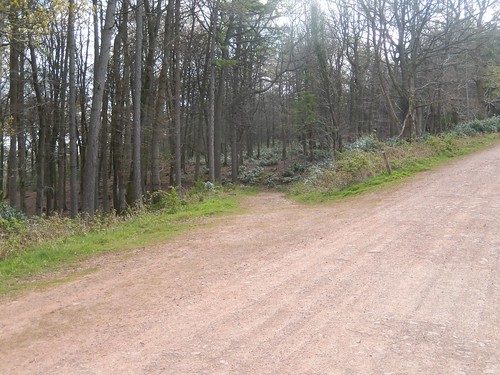 It talks about how the Greenway leaves the track to skirt around the edge of woodland but, if you could look closely at the photo above, you would see clearly that the route continues ahead. What the author would like you to do though is to depart through the trees on a minor detour before you reconnect with the same trail further up. 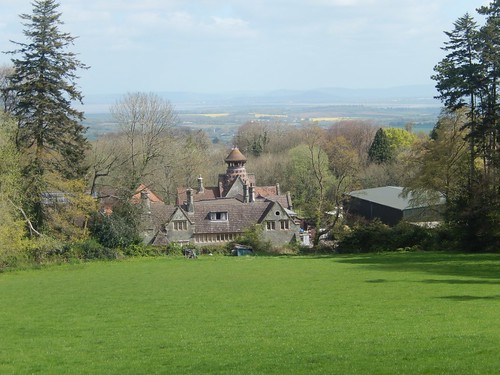 Believe me, I continued further ahead to the next waymark before turning back and taking my chances in the wood. It was not long after that, following the intended route, that I arrived back at the signpost anyway. 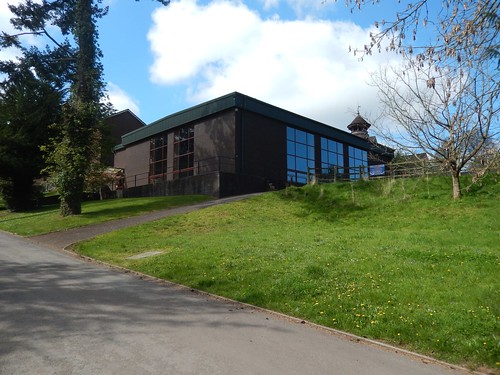 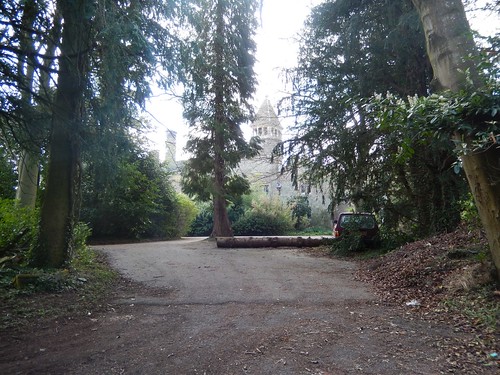 This diversion takes you away from the gravel track and past Quantock Lodge, which apparently hosts its own public swimming pool among other facilities for its residential students. 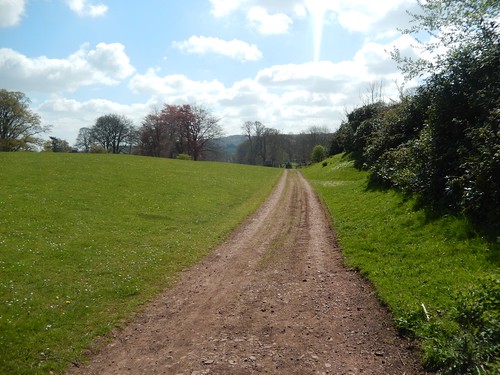 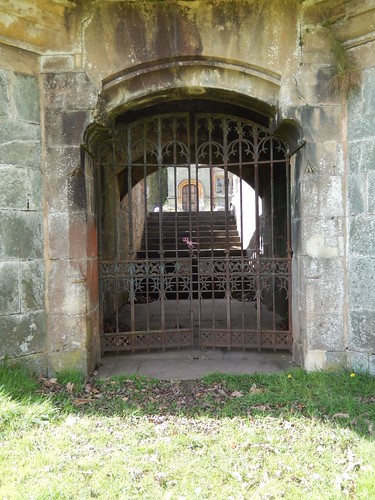 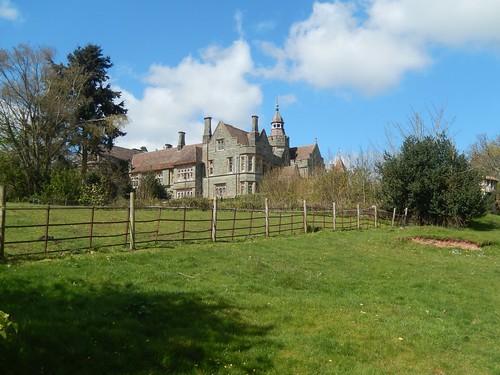 Below, the road to your left is the former route to the old gatehouse. 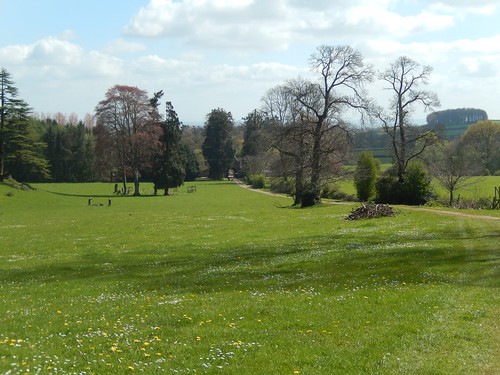 Just beyond that and around to the right was a cedar tree of enormous proportions. There was nothing else quite like it within the local area. 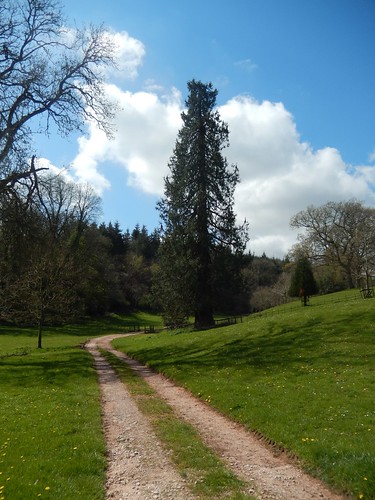 From here, you begin to climb gently again, with the route continuing up what looks like a private drive before you reconnect with the Greenway, further up the track from where you left via the woods. 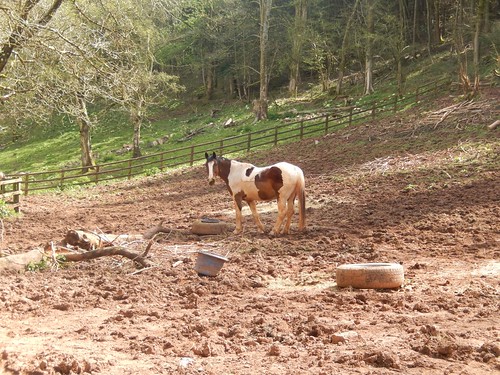 There was a rather interesting house to the left, almost completely isolated from society; fuelled off of Calor gas bottles as well, by the looks of it. 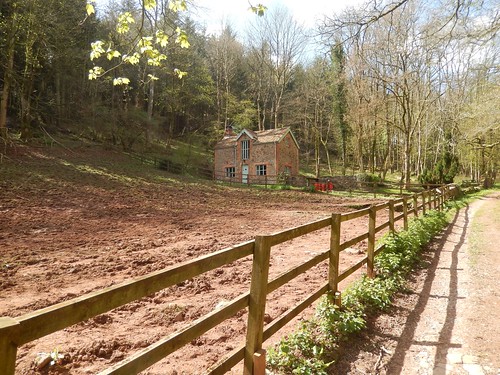 I must have then spent a good 20 minutes walking up a gentle incline. Maybe slightly longer, but it did not get any easier, that is for sure! I panted past a family of Good Friday walkers. All that kept me going was the thought of my lunch stop at Triscombe Stone…

I knew that the next step was to downhill from here so, this seemed like as good a place as any to rest and refuel. Views towards Exmoor (I presume) were quite spectacular. To my right, I noticed a more significant hill that I will attempt to climb on another occasion (this walk was largely to introduce myself to the area). I am also now aware that Wills Neck was only a stone’s throw to the south so, there is a lot more for me to explore on another day.

Please feel free to peak ahead to the second part by browsing through my entire photo set from the day.