I apologise for wait. My laptop’s keyboard suddenly turned erratic just over a week ago and as certain keys had lost their function, one by one, I’ve only just this evening gotten around to fitting the replacement keyboard. This will be the conclusion to my first Quantocks walk. In the mean time, I’m also behind on other walks that have happened in the time since, not to mention all the other issues and topics I’ve been wanting to write about while I’ve struggled to even load a successful laptop boot. 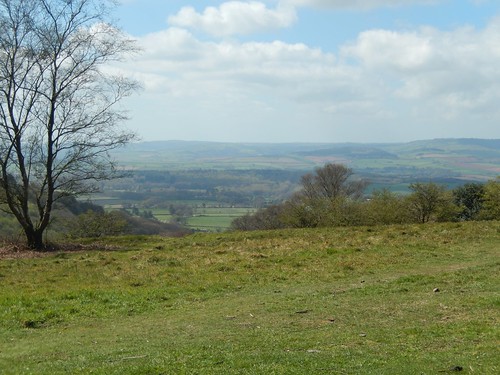 We concluded Part 1 with a lunch stop at Triscombe Stone. Just a nudge beyond the halfway point, the walk continues clockwise around the western edge of the northern hills and it’s on we march towards Bicknoller.

Some of the views from this point are extraordinary, as I suggested towards the end of my previous post. The Greenway continues down a roughened road that descends downhill from the car park. It was rather disappointing, with the countryside all around me. Looking to my right, I could see a large hill and I’ve since learned that there’s a trig point up there. Had I been equipped with an OS map, I’d have forged my own path over the hillside and in to Triscombe itself. 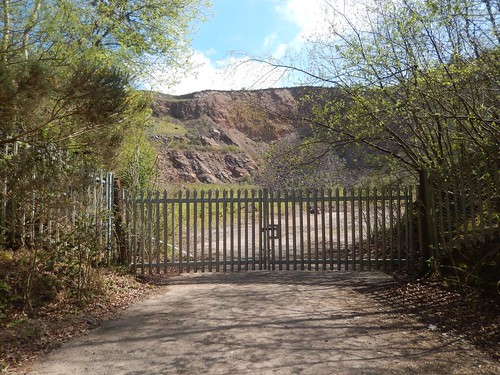 You pass the entrance to a quarry before taking a right-turn opposite The Blue Ball Inn. Here, you’re heading towards another village in Crowcombe. This path consists of a tarmac road and a gentle incline but keep your head high and your eyes will be in for a feast. 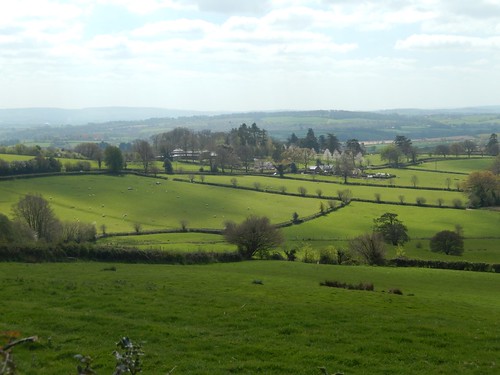 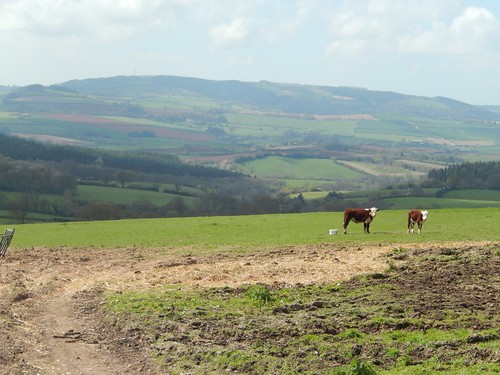 I enjoyed a rather quiet, undisturbed walk through this village – like many of the others, in fact. It seemed to be quite tucked away and ‘protected’ from the ravages of the modern world. I noticed a large parking area that could be ideal for people looking to set off on their own walks across the hills.

I passed the entrance to Crowcombe Court which appeared to be, well, quite unlike the open-to-all outdoor spaces of Ashton and Oldbury, up here in Bristol.

Further up the lane, I paused the take a photo of a tiny terrier sitting in the middle of the lane ahead of me. Moments after, I heard a big rustling in the hedge to my right and this guy appeared: 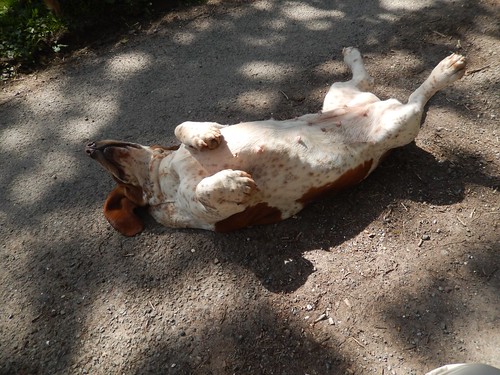 Of course, ‘he’ is almost certainly a she! 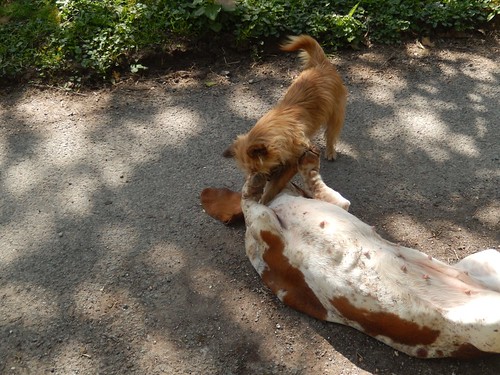 This was one of those dogs where you got to stroke their head but they immediately succumb to revealing what they really crave… A belly rub!!

After 10 minutes of playing with the dogs, I realised that those hills were only going to wait for me. I must’ve had a good 8 miles left to cover in this early-mid afternoon.

Up ahead, I passed the impressive Halsway Manor. 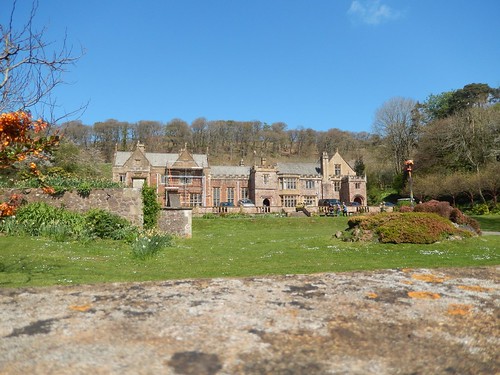 While some construction work was clearly on-the-go, I learned through the text I’d been following that this building is now owned by a registered charity; the Halsway Manor Society. On passing, I could’ve guessed that they were a folk-based society. Not purely for the large sign outside but there was a band performing in the main garden (perhaps you can just see them above?). 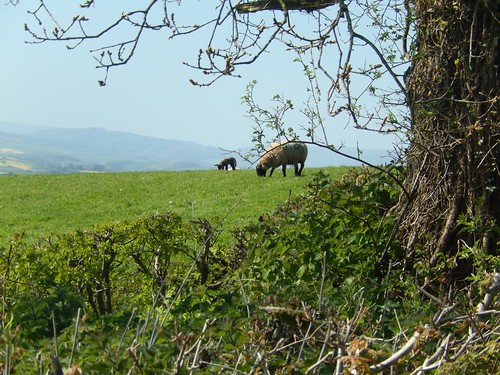 It really is quite an easy route to follow.

As you can see above, the waymarks are bright and clear (well, about as bright as green can get without turning neon). Other colours indicate a different route. 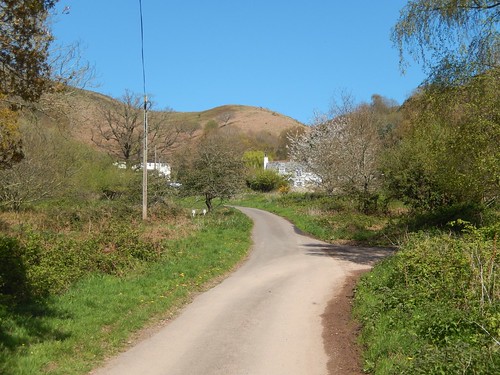 But for all the roads and paths I’d been trekking, I was going to have to return to those hills at some point. They weren’t going to lay down for me either.

My next stop then was Bicknoller Hill, bordering the village of the same name, on the north-western edge of the hills. 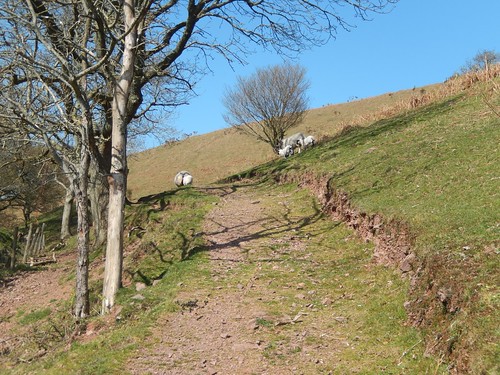 Bicknoller just sounds like the kind of site that’s going to entertain an avid hill-hiker. Part of its name shares the ancient term for a hill fort (“knoll“). But I didn’t go up and over the top as much as I contoured around the outer edge, before descending in to West Quantoxhead. 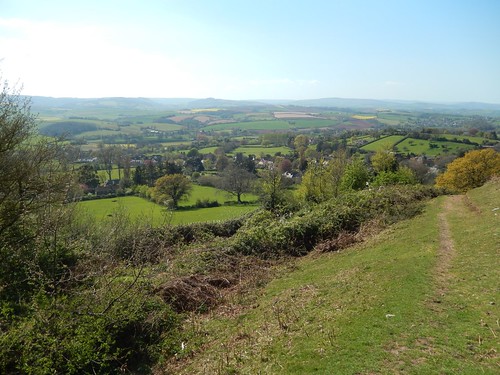 Then I reached a point at which I almost came unstuck, as one arm of the three-way signpost appeared to have been snapped off under force of a fallen tree. 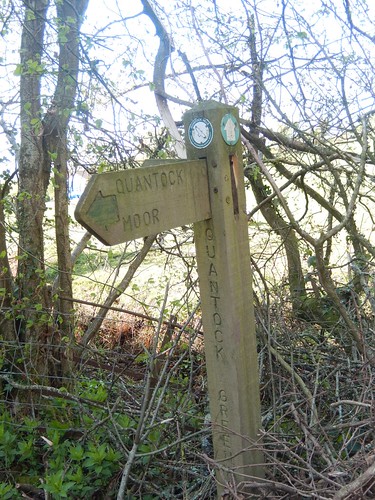 I searched in and around those branches but I could not find the splintered ends that would complete the trio of arrows. I wasn’t prepared to go backwards and there was no green arrow pointing left and so, I took a chance, heading right and up the hill and, well, it payed off; I was on the right track.

As I reached the next village, the sound of passing traffic from the A39 was loud and clear. I could gaze north to the horizon, where the blue of the sea was only superseded by the lighter shades and the sky. 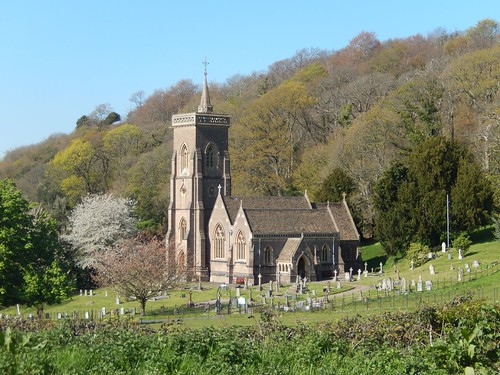 Walking parallel to the A39, I realised I was now following the West Somerset Coast Path – walking the British coastline is a theme of several other WordPress bloggers that I enjoy following. 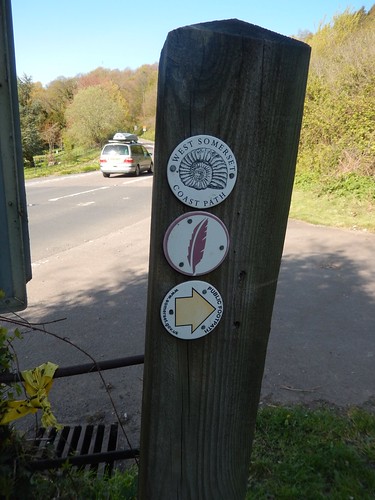 Leaving the road and my last village for the day, there was only one direction to continue in and that was up, with plenty of hills awaiting! 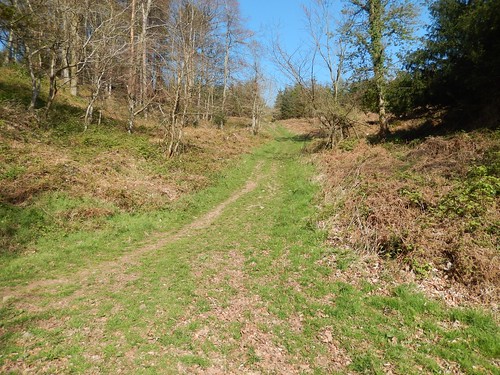 Although the path appeared obvious at first, I came across several junctions without any arrows to guide me on my way. 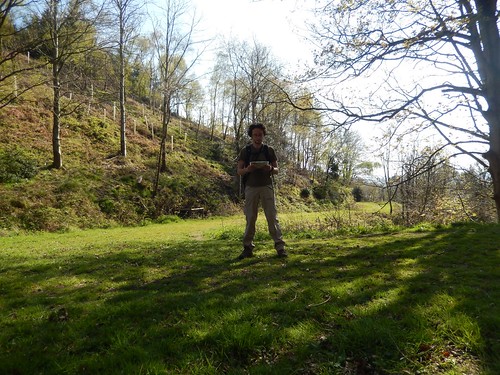 My forged OS print-out was incapable of providing the level of detail I required to navigate my way forward. All I had to rely on was my compass; knowing that the A39 was to the north, Holford was somewhere to the east and that I should soon be bordering the confines of a deer park. 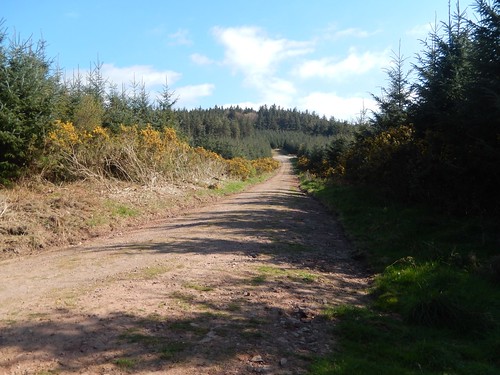 As the surrounding landscape began to remind me of the Mendips’ Rowberrow Warren, I came across a marker that reassured me of my path. 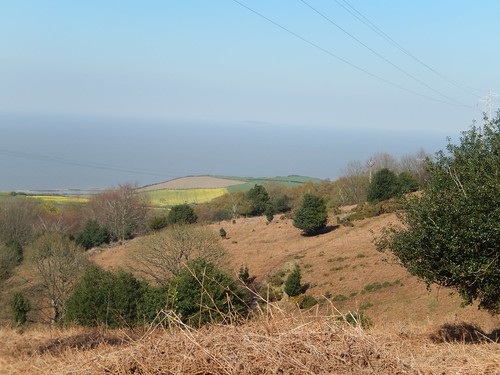 I didn’t managed to spot any deer but that was insignificant, with the clear-cut climbing ahead of me. 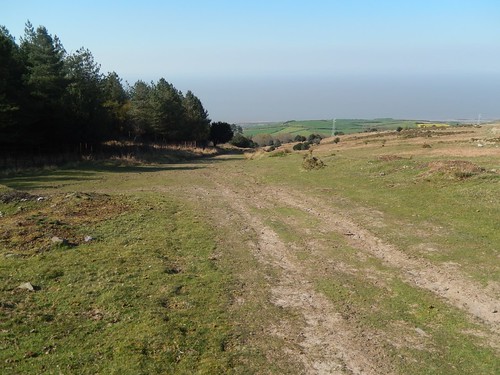 At this point, my legs would’ve told you that they’d saved the worst of the hills until the very end… 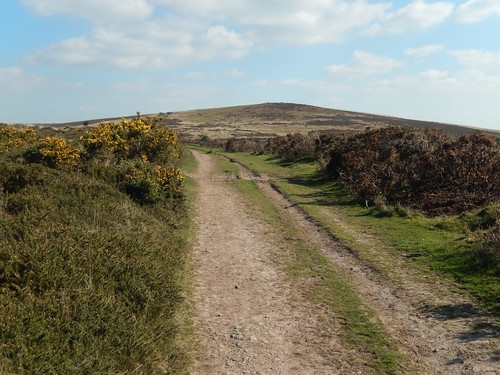 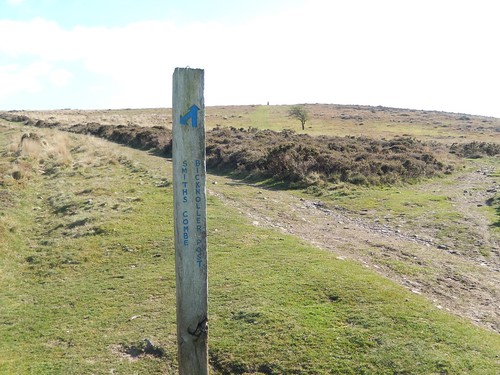 From here, I found myself playing another game of guesstimation but it looked like one I could enjoy, nevertheless. 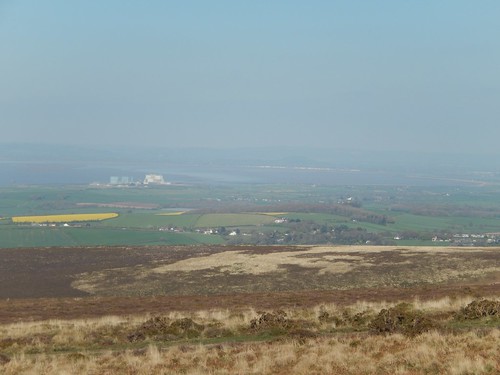 A sign pointed to one combe but the text was directing me to another. Again, I could rely on the vision of the coastline to guide me. But before that, I’d set my sights on the trig point, slightly off from the intended track. 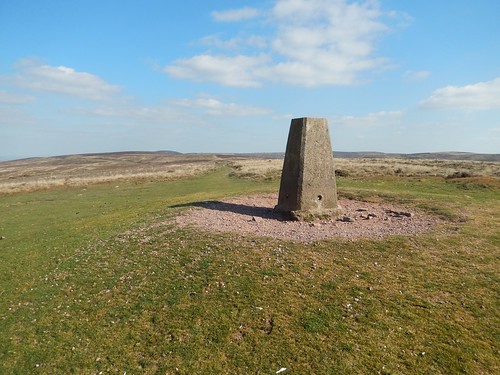 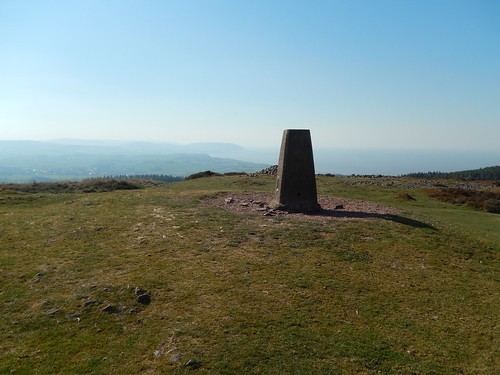 From here, I remained none the wiser on my quest for the car park I departed over 8 hours earlier. 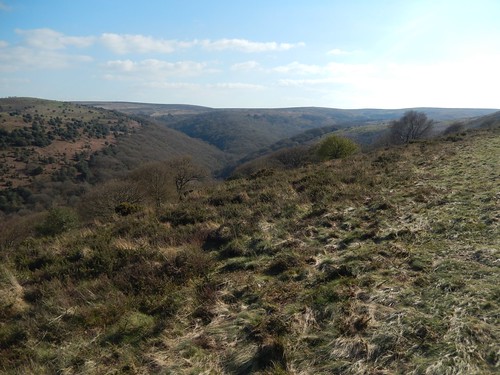 I looked east, in the hope of recognising a hill from my outward route… But as different as they were, they all looked too similar. Unfamiliar. I was going to have to rely on my senses of survival (disbelieving that I have any for direction) while using the visual guidance as I’ve already referred to.

If not Holford, I hoped that I could bear down on to the A39 and followed it in to the village, turning right beside that pub and down to the car park… 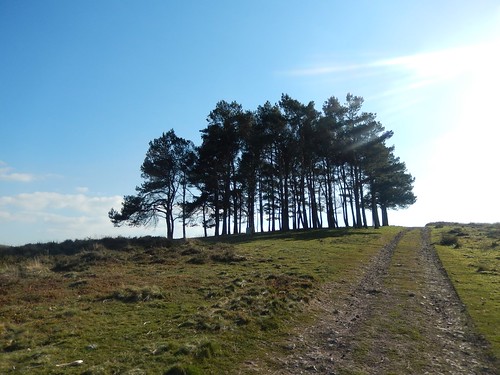 On my way down, I passed this small group of trees, so far dispersed from the rest of their kind. Almost out of place. I had to stop and admire the plaque: 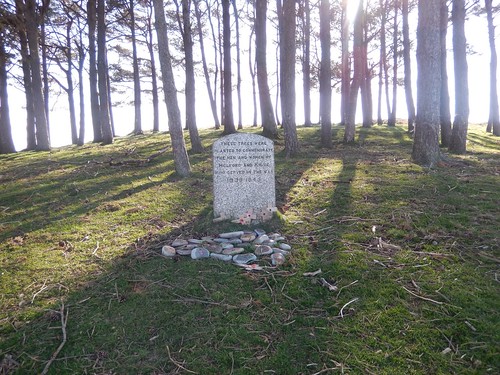 I then continued down the most uncomfortable of tracks of the entire day. Large rocks, a steep descent; a part of me just wanted to fall and hear a snap; at least then, the pain could begin and the suffering might be over. As I reached the bottom, I discovered a tarmac road. A few yards further and I spied a gathering of cars… 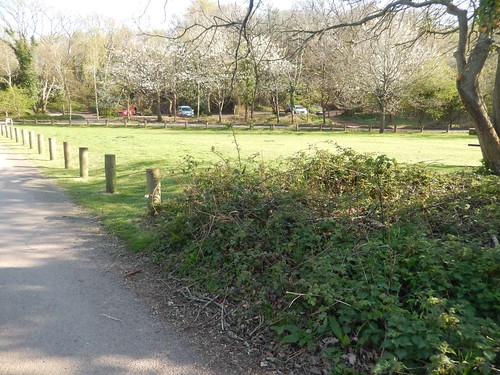 Would you believe it, I’d arrived back at exactly where I wanted to be! I could see my car!!

Ironically, this was the path I almost followed the wrong way when departing at the start of the day. I may not have followed the Quantock Greenway to the tee but I had one heck of an adventure down on those hills. I cannot wait for my next visit, where I travel the southern end.

As before, my entire photo album from this 21-mile long walk is available to view, right here.