Having met landlord for the first time and almost by chance just over a week ago now, I was given the green light to go ahead and fit a wall mirror above the bathroom sink. This is actually something I bought several weeks ago from a well-known Swedish furniture emporium… But hey, if it balances out my morals then I ended up spending a greater value of money on Pic’N’Mix sweets that day!! 😉

After fitting the mirror, I decided that I wanted to make one other alteration and that was to increase my sense of privacy within this ground-floor flat. I naturally have to lower the blind when I’m taking a shower and with the toilet sat in front of the window, well, you can imagine how uncomfortable I sometimes feel with the window at head height!

So, I’m now going to show you how I went about fitting some self-adhesive privacy film.

I was thinking about buying a net curtain and not only did I have to contend with the size of this window but also a style and design for the curtain… When I found an eBay seller offering a 1m long x 720mm wide sheet of ‘cloudy’ film for only £6 including postage, I didn’t  have to think again! 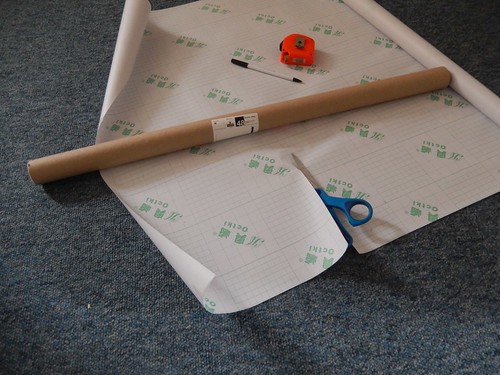 After measuring my panes, I added a good 5mm or 10mm to each dimension so that I could ensure a near-perfect fit after trimming. These sheets had a grid-like pattern on the back which made it easy to trim with scissors.

Before fitting the film, I cleaned the glass and buffed it dry. There’s no easy way to apply the film that I know of. Although, you could probably find various options through some of the many YouTube videos that cover this subject. I then used an old plastic squeegee to try and iron out the bubbles as I went (always starting in the centre; working up and down before reaching the sides). 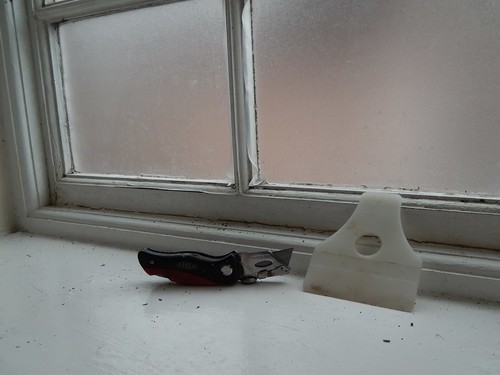 That then left me with the excess and overhang to trim away with a Stanley knife – I used the squeegee as a ‘rest’ between the blade and glass; to prevent scratching and also to ensure a clean edge around the film (a tip I inherited from YouTube).

It’s fair to say that I made quite a mess on one of the upper panes, with this large crease visible for all to see… I tried to forcefully iron it out in a moment of perfectionist’s frustration but that only forced a tiny diamond-like hole to appear within… As much as I could let it bother me, my neighbour’s would have to squint very hard (not to mention standing high atop their toes) in order to catch a glimpse of me entering or leaving the shower.

As I’ve only chosen to cover the lower half of this window, I do have plenty of spare film left, should the self-adhesive bond here begin to fail at some point. I see no point in disguising the top half of the window as my neighbours aren’t exactly 8ft tall. 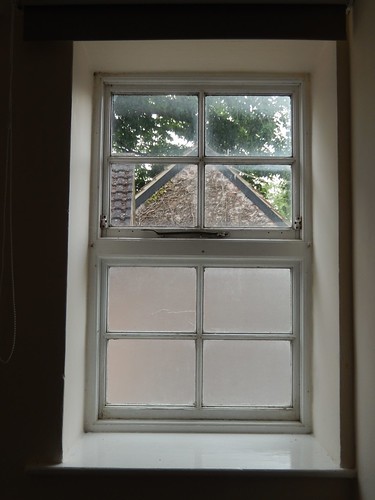 It looks fine to me.

That’s going to be a theme to end this post – because perfection is too often the sought after in our lives and, when we fall slightly short and fail to reach our intensive goals, we can feel deflated and defeated. My window film may have at least one flaw but it’s functional and serves its intended purpose.

Take a look at the bathroom mirror, below. Again, this is perfectly functional: 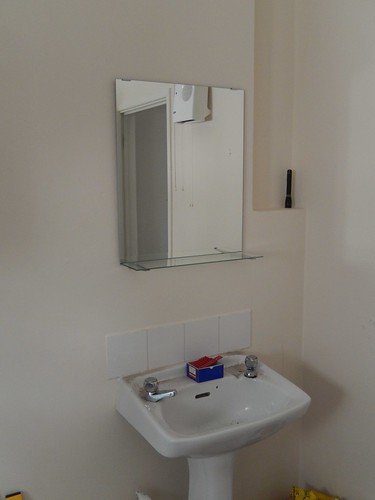 …Well, ignoring the box of screws still resting on the sink top!

Yet, after marking out and drilling each of the four holes carefully, it isn’t quite perfectly level: 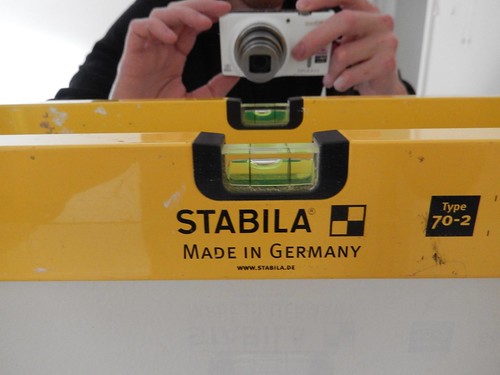 I may occasionally catch the crown of my head on the light glass shelf when I bow down to wash every morning but this mirror is fully functional. It’s good enough for anyone (of a similar height) to use, in my opinion. The fact that its shelf lies on a minor slant is irrelevant. Nothing falls off. It’s even fixed against a convex wall (Irish plasterers???) but it’s a mirror. It’s fine.

My bathroom’s not perfect but it has certainly been improved within the past week. Now, it’s on to the rest of the property.

Thanks for reading and try to assess whether something is actually good, even if it’s not perfect.