My mum’s birthday came and went very recently and following the success of the chocolate cake-bake for my own birthday bake in March, I decided some time ago that I would be baking a white chocolate [mum’s favourite] cake for this occasion.

Above, you can see all of the ingredients I used (excluding the kitchen cleaner and bottle of olive oil!). Almost every item could be purchased from my local Lidl store, with the exception of only buttermilk and vanilla essence. There’s a chance you could find these in a larger Lidl but, while I was shopping elsewhere with no more than a basket in hand, I decided to buy myself a new liquid measuring jug – one with a scale you can easily read without the need for backlighting!

Having finally caved in to buy a hand mixer earlier in the week, this would present me with the perfect opportunity to try out my new tool. I didn’t know exactly what I’m going to what from a mixer and, even, whether I really need a hand mixer or something larger. So, I was pleased to find this one for less than £15. I should be able to learn from this purchase. It comes with 2 beaters but I’ve found you can buy additional bread-hook attachments – but then, I begin to wonder whether I should’ve just spent an extra £10 in the first place! 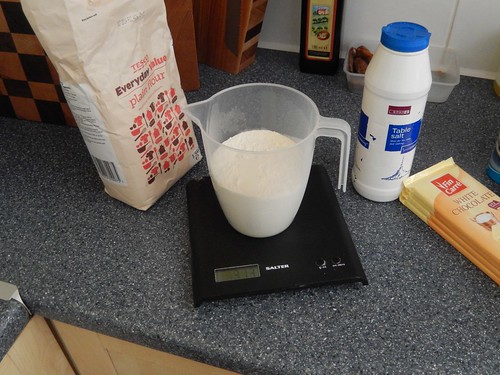 With a brand-new (albeit smaller) jug in the cupboard, I was still able to use my old one when it came to weighing up the flour and sugar (each in turn, of course). 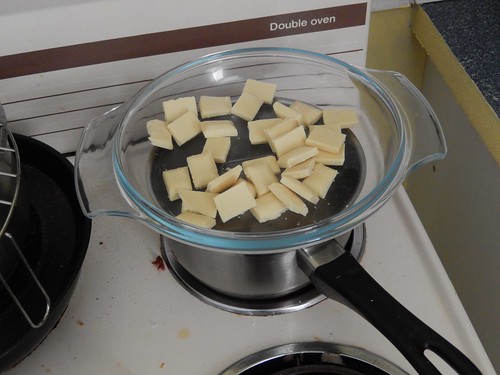 Just as with my last cake, this recipe calls for the melting of solid chocolate bars – although, there’s some confusion in the text, where the author seems to imply that you add the chocolate to the boiling water… I knew better from previous experience and also from several reviews written for this cake. This time, I used the lid of my casserole dish in order to melt the chocolate over the steam. 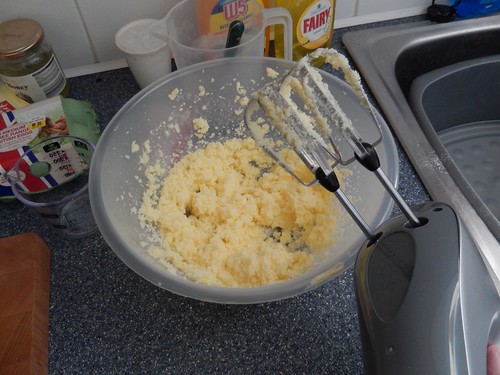 Using the mixer for the first time was a real joy. I was expecting it to be somewhat loud and rough-sounding given its price. But my neighbours had nothing to complain about and, although I hadn’t previously deemed it necessary to use anything more than a wooden spoon for cake mix, I won’t be reverting to that old method in a hurry! 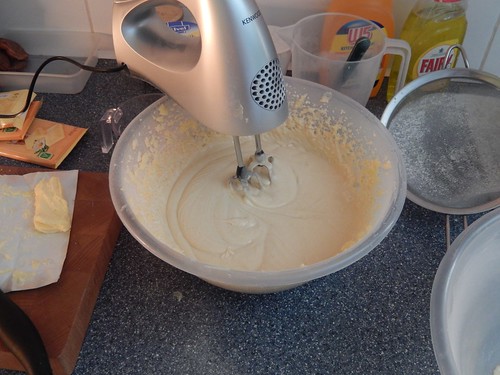 When the time came to put the mix in the oven, I couldn’t remember off-hand what had happened with my first cake but I remembered it being a little dry to the taste. So, I subtracted the usual 20% from the suggested cooking time (a typical compensation for halogen ovens) and went with that. 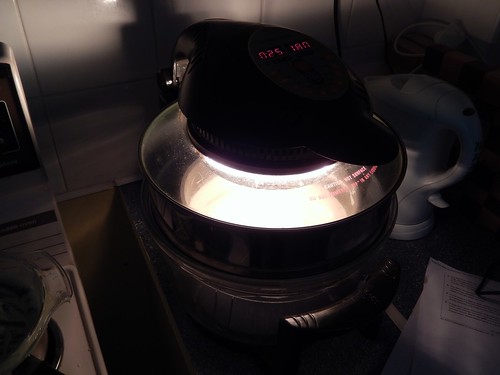 I fitted the extender ring to keep the heat source a little higher about the cake tin (for fear of over-cooking or even burning the cake) and, learning from past experience; I cooked one half of the cake at a time, using the same 230mm tin. Previously, I found that there wasn’t enough room/air circulation for two. 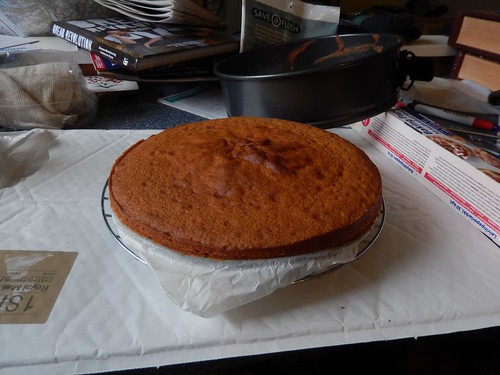 Before pouring in the first batch of mix, I had the ingenious idea to line the inner tin with baking paper, which would allow me to easily remove the first half once it was cooked, so that I could then immediately re-line the tin with fresh paper and pour in the second mix.

But it was an over long and drawn-out process and, while awaiting for the first batch to bake, I set to work on creating the white chocolate icing. 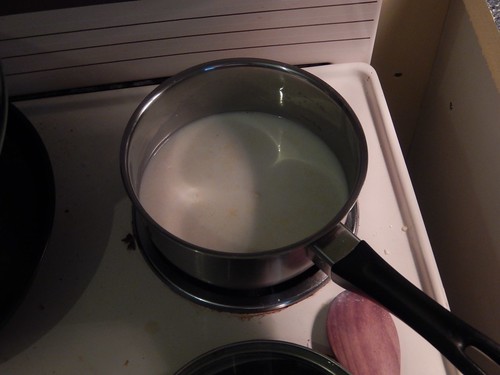 But here, I found further confusion/misdirection where you’re instructed to heat the icing ingredients simply in a bowl over heat… I soon found out that this didn’t mean directly in a saucepan!

As the mixture burned and much of the chocolate (or at least, its sugars) appeared to weld on to the inner base of my smallest saucepan, I assume that you’re supposed to heat it in much the same way as you should melt chocolate over boiling water. 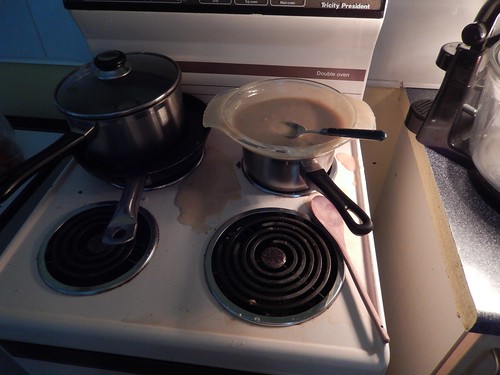 My next concern came in creating the desired consistency. From my own experience, I determined that you’re supposed to melt the chocolate and then to remove it from the heat, so that the icing can cool and thicken as you continue to stir… Stirring a mixture that remains over a temperature only creates the kind of mess you can see above! This, however, wasn’t very clear in the instructions.

I made a mistake in over-compensating for the absence of chocolate now but adding a significant portion of sugar in its place… I was looking at the wrong half of the recipe! 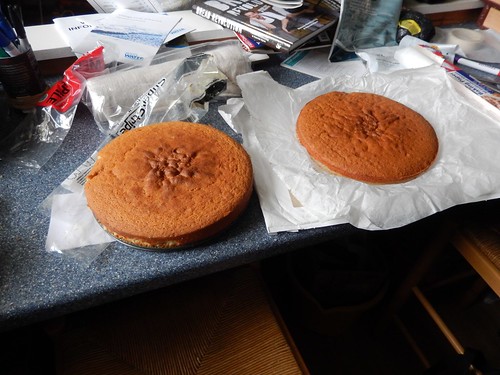 As the second half of my cake came out of the oven, I noticed that although it appeared to be a rich, golden brown and it was in good shape around the edges; it was however still rather soft and ‘eggy’ in the centre. So, it was returned to the oven, at the risk of now over-baking at least half of the cake… 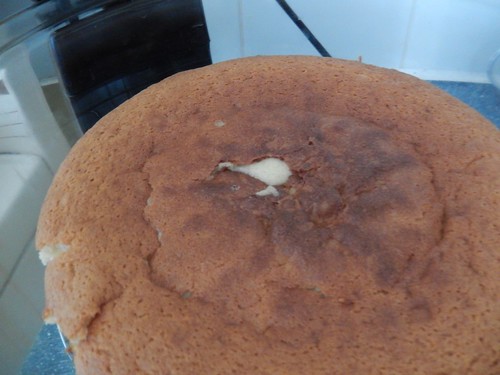 On both halves, the bases were worryingly fragile and I had some difficulty in removing them wholly from each baking sheet and then bringing them neatly together with a layer of icing for glue. 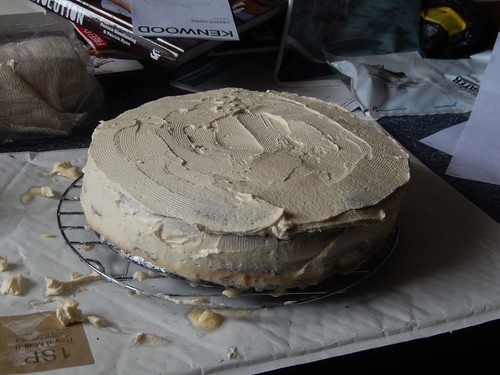 In the end though, it tasted very nicely after a night in the fridge – if a little sweet with all that extra sugar. It’s not the healthiest cake I shall ever bake but I’ve already received orders for a replica and I’d like to bake one for myself, so that I can sample more than a single slice!