Is it possible to experience jet lag after spending two nights in a tent? Not to mention the 2-hour drive there and back. Because that’s how I’m feeling today, having only risen from my bed an hour ago after three enjoyable days down in Dorset. 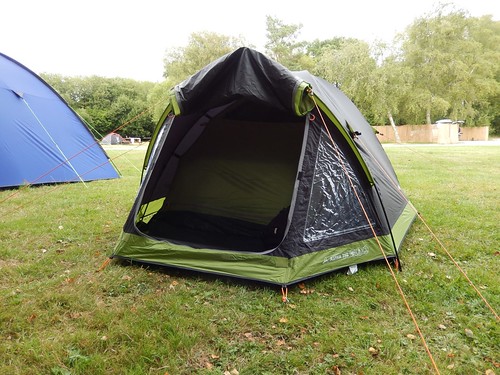 It was my first proper experience of camping. My original plan was to head down there with a friend but, she was anything but well enough to travel come Friday morning – when you’re unable to experience a bit of the sea, sunshine and British heritage, you know you’re not feeling good! I fought my fears and headed down alone, without too much of a clue. Worst case scenario; I could always depart after the first night. But I stayed within the county well in to my third day (yesterday) before heading home.

I could go on and on. My initial count from this long weekend came in with 410 photographs, straight off my SD card! I’ll add links to the relevant Flickr albums at the end of this post but for now, I’m going to try and very briefly summarise what I experienced.

I chose to stay at the Woodlands Holidays campsite just outside of Wareham and booked my pitch several weeks in advance. This site was chosen for its low-price and facilities. Compared to some of its competitors, I took my friend’s advice to go for a more ‘sheltered’ woodlands scene, as coastal campsites can be a bit on the breezy side. I found the place without any trouble. Having previously driven down the A37 to Dorchester twice in previous years to buy tools, I knew most of the route and the tail-end was simple and clearly signed for. 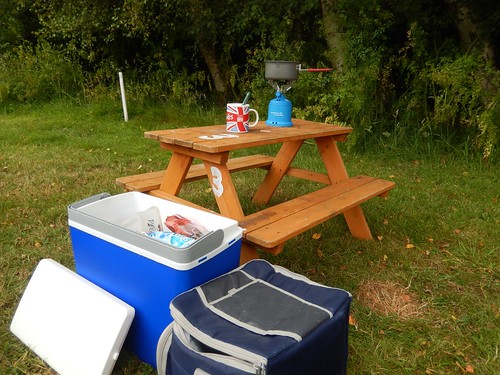 It took about 45 minutes to get my tent up, after a bit of faffing around getting the fly sheet aligned correctly and then repeatedly hitting something hard below ground and bending a few pegs. This was mid-afternoon and, even after boiling my first cup of tea, I wasn’t quite sure of what to do… It felt like I was waiting for night time so that I could try to sleep and hope to wake up ready to explore the coast on Saturday morning. 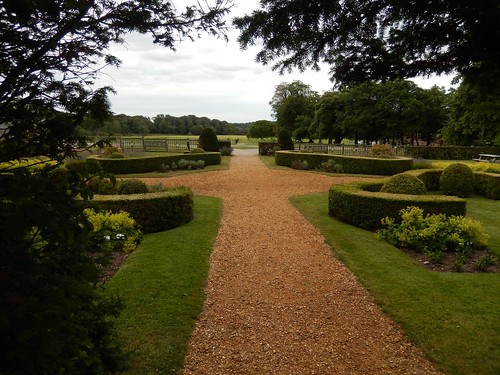 So, after analysing my OS map for long enough, I jumped in the car and headed down to East Lulworth where I would find Lulworth Castle; an English Heritage property I’d been saving until my find day in Dorset. 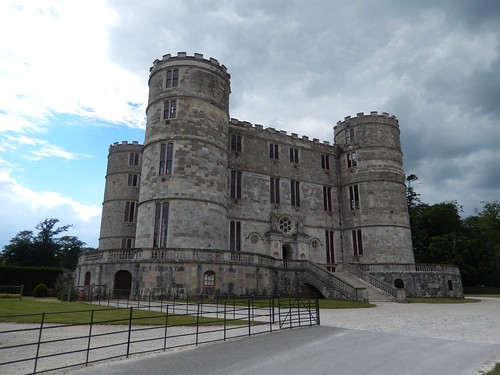 It looked a lot like Ashton Court – that was my first impression. A grand entrance from the road up the long drive… I then you’re required to spend £3 in the pay-and-display car park! Three-times as much as in Bristol. But I drove straight out the exit, mulled around the village in my car but couldn’t settle on an alternative free spot, with so much of the surrounding land having been acquired by the MOD. So, I went back in, parked up, paid and duly displayed. 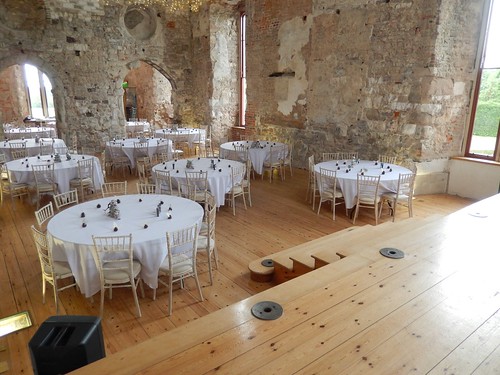 I was hesitant to climb the steps up in to the castle/museum as you’re expected to pay an additional £5 (on top of the parking fee) to enter (unless you have English Heritage membership). But due to the ‘disruption’ of the wedding preparation in action and, just one-hour before they closed, I was told that admission would be FREE! So, I got to explore the ground floor, the first, to climb one of the towers an then it was out and around the rest of the grounds.

My dinner that evening consisted of leftovers from the lunch I’d prepared before leaving home and I think I warmed some rice pudding to go with that. Sleeping that first night wasn’t easy and I soon realised an error in not taking a pillow with me. Even with a stack of clothes, I struggled to find complete comfort. 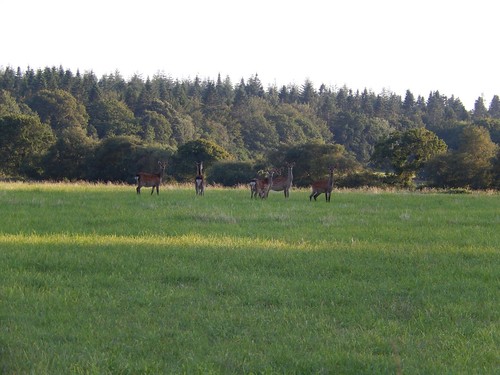 But before going to bed, I went on a 30-minute wander around the lanes and footpaths (when I could find them) of East Stoke and in a penultimate field, I spotted the deer you see above.

Day 2 – my first full day in Dorset – began with a drive down to Lulworth Cove, from which I would begin a westward coastal walk to take in some of the Jurassic coastline’s most infamous landmarks. I spent £7.50 on car parking for more than 6 hours.

After finishing my lunch at Ringstead, I decided I would head north to make a return route across the hills and mainland; as opposed to simply retracing my steps. 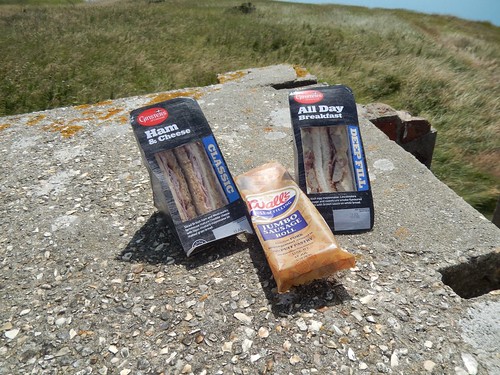 …My meals for this day came from the Spar shop located close to the camp site. 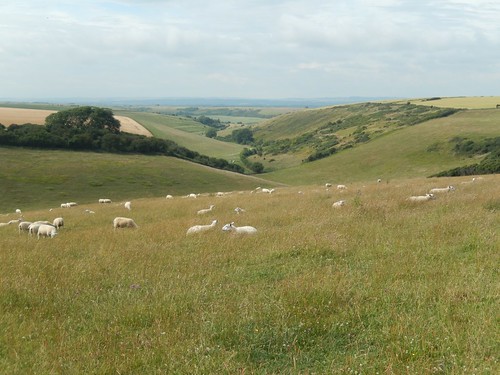 I could write on and on about this walk. Perhaps I should save that for a separate post though? By the time I returned to Lulworth Cove, I’d been walking a good 8½ hours… Having checked this morning, that was just over 17 miles! It was deceptively cloudy by this time too, as I looped back around via the MOD’s firing range, which is closed to public access on certain dates. 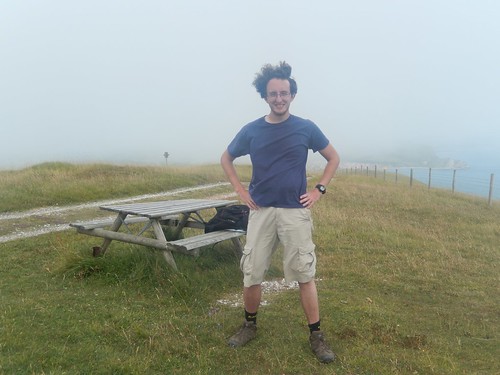 I popped in to Spar on the way back up as I needed some more milk. Back down in Lulworth, I’d passed a tea kiosk that was shutting its doors and, worst of all, a coastal fish and chip shop that was CLOSED well before 7pm!! I didn’t fancy sitting alone in a pub or anything and bought a bag of freshly baked potato wedges to go with my remaining sandwiches from the morning.

With a strain behind my left leg and a pain in my right foot, I felt more prepared for sleep than on the previous night. I also knew that I’d have to vacate by 10am the next morning, which I kind of looked forward to.

But I wasn’t about to drive home in time for lunch. Day 3 was always going to be about Corfe Castle; only 15 minutes from where I’d been camping. I felt awkwardly sad to be leaving and I didn’t want to come back to the monotony of what I do. At the same time, I was anticipating taking a shower without having to queue first!

This was the first time in a year that I’d been able to use my National Trust sticker to save on car parking. I’d still have to pay the full £8.80 (including Gift Aid) to enter the castle but it was worth every penny. I’d pay it again, even though the European girl behind the desk made a monumental mess of my surname! 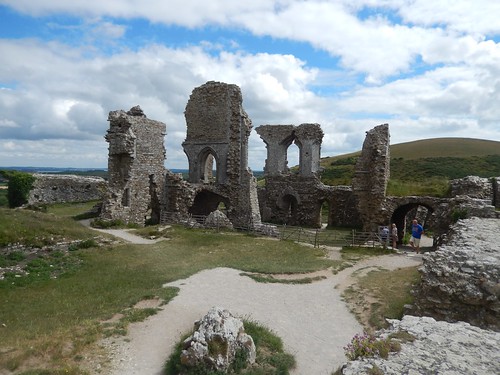 After spending a good hour assessing the ruins (not to mention limping, after my 17 mile walk on Saturday), I passed on a couple of tea shops wanting almost £8 for a bacon baguette, mulled around the National Trust shop without spending anything and then walked in to Corfe Castle’s Model Village, where they only charge £3.50 for entry – this was one of those holidays where you spend more on entry fees and car parking than on food! 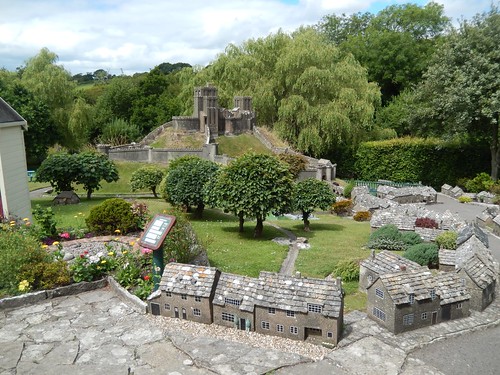 It’s not bad value for money at all. Apparently, it took 2 years to complete and it’s good to be able to see a 3D representation of the original castle (prior to its partial demolition), where the National Trust site only provides you with 2D sketches. There’s plenty more here for kids to explore.

This final morning was pressing on. I was torn between getting back early and dragging the day out to avoid much of the northbound traffic… But my legs weren’t up to walking as much as I’d hoped, in spite of the hills and common land that lend Purbeck its beautiful landscape… Another day, perhaps! At only £1.60, I found the National Trust’s Visitor Centre (beside the car park) to have the most reasonably priced cup of tea in the village. Plus they had a few slices of cake! Once that was gone, I had to head home (after an altercation with a bus-load of German holidaymakers blocking my escape).

Although I accidentally found myself driving too far west and in to Weymouth, my intention had been to ignore the A37 that led me here and to devise a different route home. I wanted to head towards Sherbourne, where I could pass a glimpse of the Cerne Giant chalk-carving along the A351. There’s a car park beside the viewpoint with another down the hill, right next to a picnic area. It wasn’t as clear to see as I’d hoped but you can make out at least some of its features…

From Sherbourne, I could continue east for a bit before turning north towards Wincanton and then along the A371 to Shepton Mallet and soon to be home. I had to avoid a police road closure on the outskirts of Dorset, not to mention an incident very close to home at the bottom of Burrington Combe, where an off-duty police officer left out of his car to confront the idiot behind the wheel of the Landrover ahead of me. I’m sorry that guy didn’t get arrested on the spot. I followed him most of the way through Wrington and he continued to drive like a p***k in the law’s absence.

So, that was my first camping adventure and I did it mostly on my own (with a few borrowings from my flu-ridden friend). My next is still to be decided but I feel confident it will happen.

7 thoughts on “Camping in Dorset”