As 2 months have now passed since I did this walk and completed my initial exploration of the Quantock Hills, it’s about time I shared it with you! As with the Northern stretch of the Quantock Greenway, this post will arrive in two parts.

It was a sunny Saturday morning, I was up and out of the flat nice and early and my destination was Fyne Court; a National Trust property located in Broomfield. It was surprisingly easy to find; heading down the A38 through North Petherton and I noticed the National Trust sign posts immediately (although, you may prefer to take an alternative route if you detest or fear long and narrow country lanes).

This half of the walk will take you to my lunch stop at Triscombe Stone, which you may recognise as the halfway point from the Northern walk. 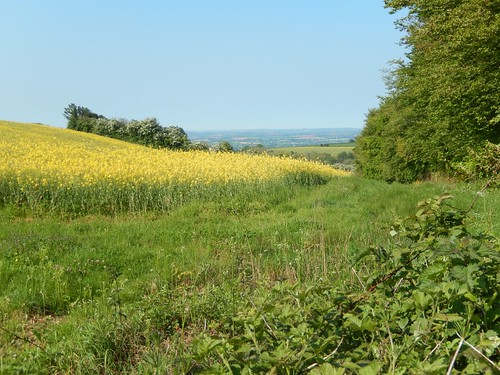 An early temptation was to wander around the court, which is one of several National Trust sites I’d been intending to visit. But with at least 18 miles to go and no guarantee that the café would be open before 9am, I had to solider on, with the intention to explore this part at the end. 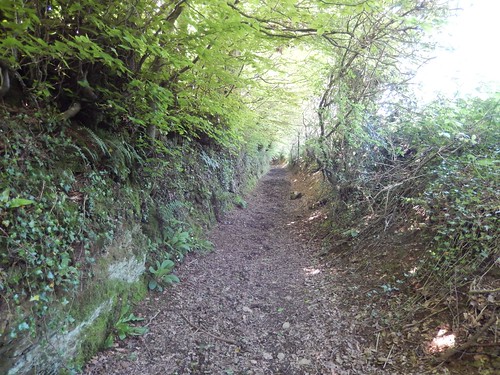 Steering west and away from Fyne Court, there was no clear sign of the telephone box mentioned in the guide I was following. I walked up and back down that lane for a bit, searching for a definitive waymark for the Quantock Greenway but to no avail. A close inspection of my OS map revealed that there had been a phone booth beside the first footpath I’d crossed. With glorious views out and over the meadows ahead, I continued down this shaded combe (which did seem to fit the description). 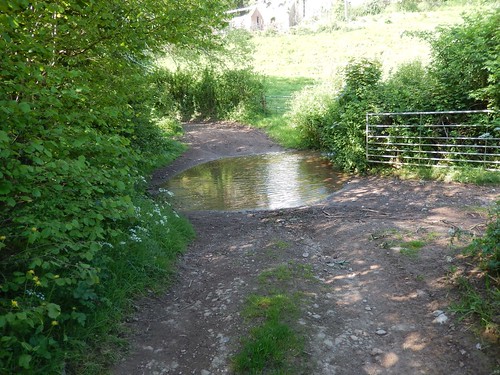 As the path began to climb uphill to Raswell Farm and a meeting with a road, there was a large pool of water (perhaps even a ford) to overcome. 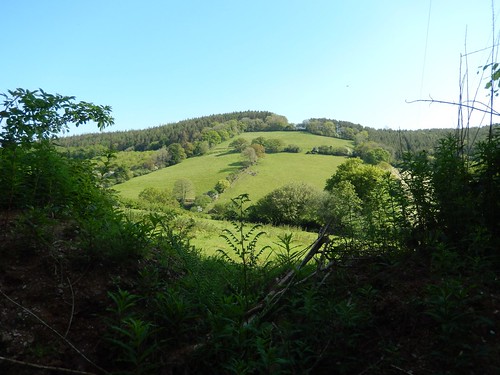 Over the road and high above the first ascent, the countryside views suddenly began to open out.

Upon reaching Ivyton Farm, you can head off in one of several directions. But the Greenway takes the most blatant route running parallel to a field boundary. It’s said that the landowner here has received complaints for a distinct lack of waymarking. I had no trouble finding the footpath…

It was after turning a corner, part-way down, that I stumbled upon this mass of fallen trees. Beyond that was a tangle of tree trunks. As I clambered through, like a contestant on the Krypton Factor, a heard a rustling and soon appeared a friendly (albeit growling) dog with bots owners in tow, coming from the opposite direction. I assume they weren’t familiar with the path but I hope they scraped through without too much scathing! 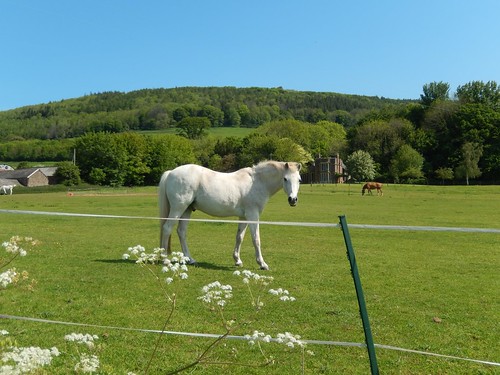 I then dropped south down Ball Lane and swung west in to Toulton, on my way towards Cothelstone.

Just outside the next village, I spotted this pair of gates that may well have led to a public right of way, if I was reading my map correctly… But I wasn’t confident enough in my estimation to try and follow it and besides, the Greenway continued on and west of this hill.

Cothelstone’s a name I recognise from Instagram. Someone I follow (who I’ve agreed to meet up with the next time I’m down on the Quantocks) is a frequent poster of pictures from these hills and it’s one of those villages you can immediately admire. 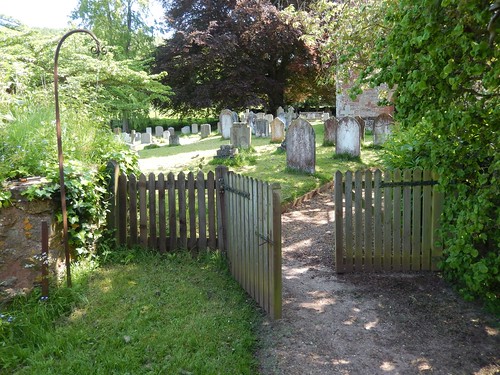 Cothelstone Hill lies to the north of the Greenway but perhaps I’ll get to explore that on my next Quantocks adventure. One major attraction I did spot in passing was the entrance to Cothelstone Manor, which I presume to be a rather private residence, although it looks as though there may also be a second footpath skirting past its north side. 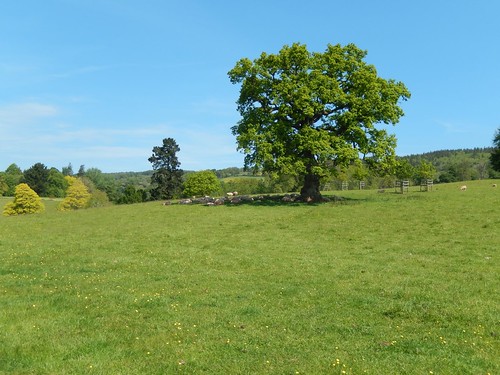 Unable to see much of the grounds beside the local church, I continued across parkland and on to Terhill via the quiet country roads. 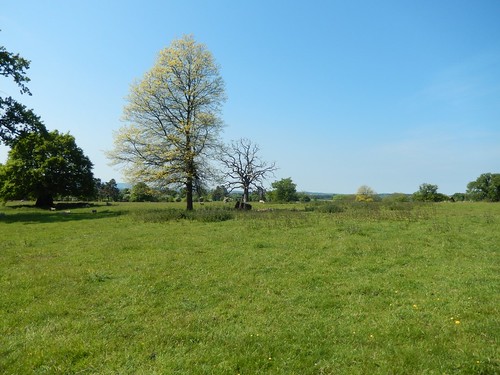 At this point, I was closing in on West Bagborough, which is barely a short walk from Triscombe which would denote my halfway point. 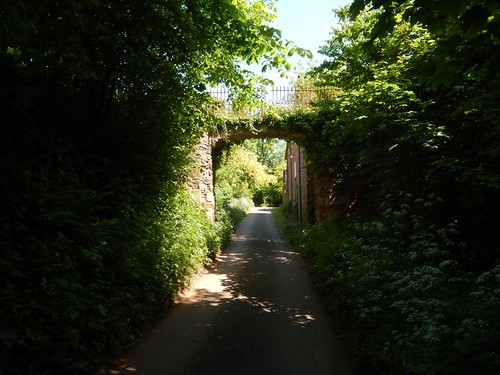 Following the Quantock Greenway, I passed another churchyard before deciding to stop for my first break when a wooden bench presented itself with south-westerly views across the region. 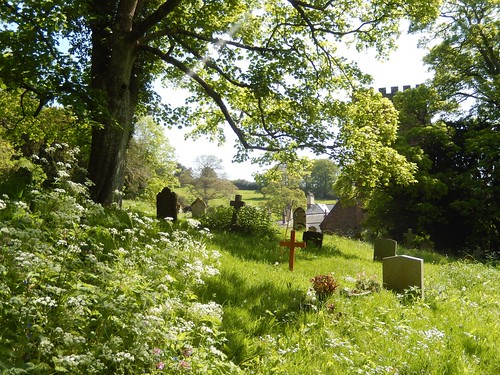 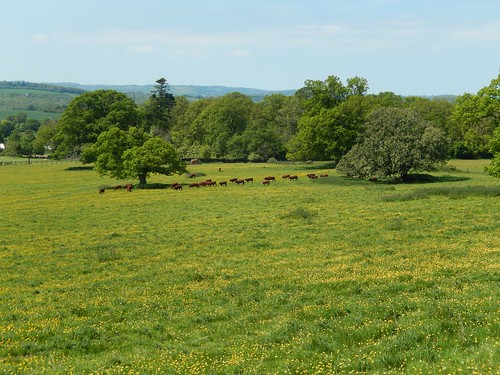 As I continued after taking in my welcome rest, I became aware of what sounded like frequent gun shots; perhaps one every 30 seconds and they didn’t sound too far away at all… I thought it was too much, too close for clay pigeons. But I soon spotted a group of people high on the hill to my right. 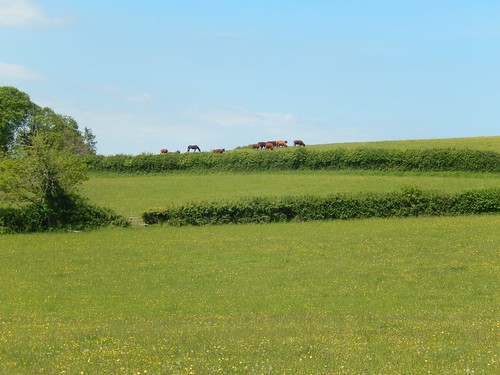 Whatever they were/were not shooting at, it didn’t seem to alarm any of the animals ahead of me. In fact, I’m quite certain I passed the same group on the second half of this walk maybe as much as 2 hours later. 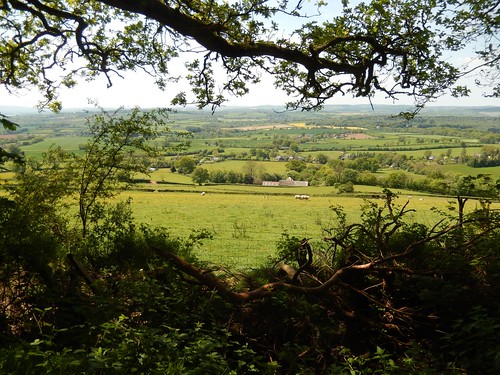 Closing in on Triscombe, which I visited on my Northern exploration of these hills; I knew that I wanted to avoid the long, steep track that I’d previously descended from. I also wanted to depart from the Greenway momentarily to explore a couple of other hills to the west…

So, it began with a steep ascent towards Marrow Hill, with an early left turn to contour the south-westerly lower-side of Great Hill.

Along the way, I passed a second pair of ramblers and then I spied a deer higher up on the hillside to my right. After uploading and analysing my selection of photos, I realised there was even a second deer behind the tree to the left!

From here, as I continued towards the west, I kind of lost my way a bit a series of paths began to splinter out in front of me… One of those situations where it’s nigh-on impossible to tell which is designated and which others have been created by animals, for example. 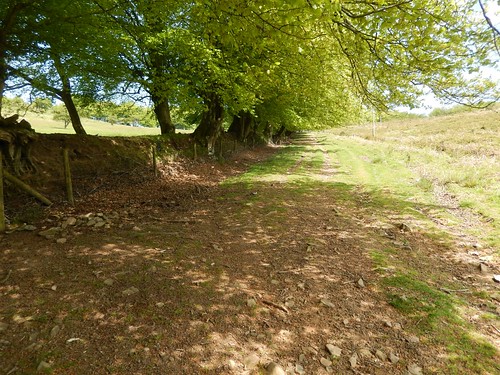 It came to the point where I would form my own tracks through the heath and bracken in order to latch on to Little Quantock Combe. I connected with this path one-third of the way up the hill, which is nothing to complain about when the sun’s beating down from overhead! It led me to the top of Great Hill with a watering hole, from which I could continue along the highest points to reach Triscombe Stone. 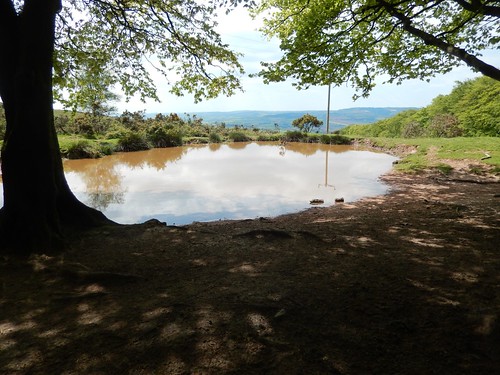 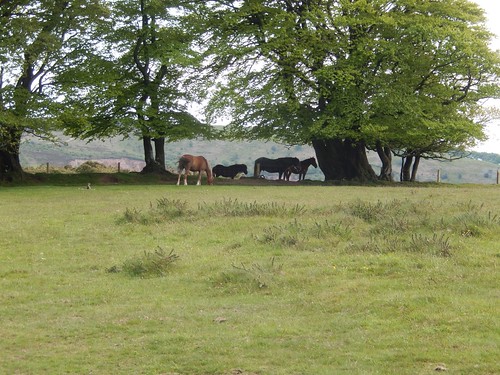 But I ignored the MacMillan Way to stick to the green-side of the hill where I could take in the best of views, avoid the passing mountain bikers and say hello to a few horses. 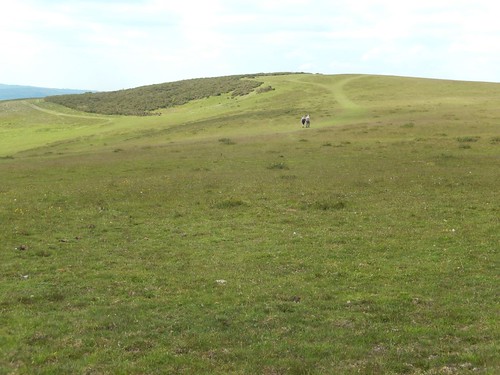 It was a grand day to be out walking on these hills. 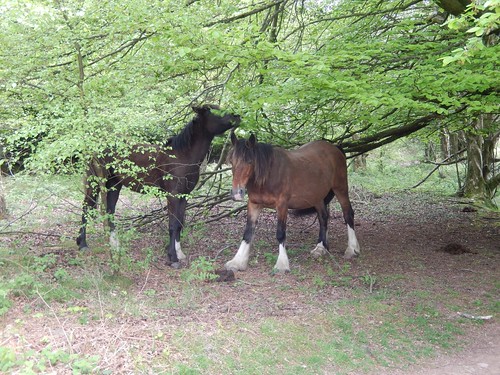 Stopping again at Triscombe for my lunch stop just didn’t feel right. I’d already been here on my last walk.  Knowing that Wills Neck with its trig point was only minutes to the east, I decided to venture on and, once again, stray from the Quantock Greenway.

I’d like this to be the midway point once I get around to planning and then leading a walk for my local Ramblers group. On a true summer’s day, we could eat our sandwiches in the sunshine. Should the rain decide to fall, we could seek shelter beneath the trees of Triscombe Stone. 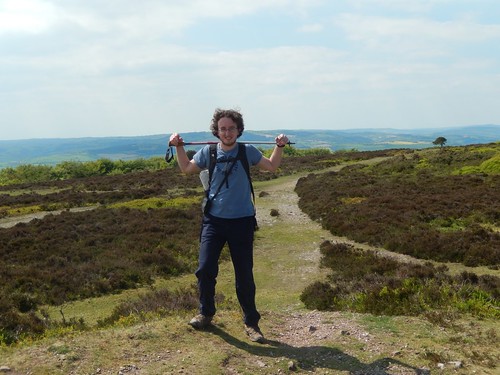 This is the point at which I stopped for lunch and so, Part 1 of this walk summary must draw to a close. Part 2 will follow soon, where you’ll discover my attempts to steer further clear of the Quantock Greenway on my return to the village of Broomfield. 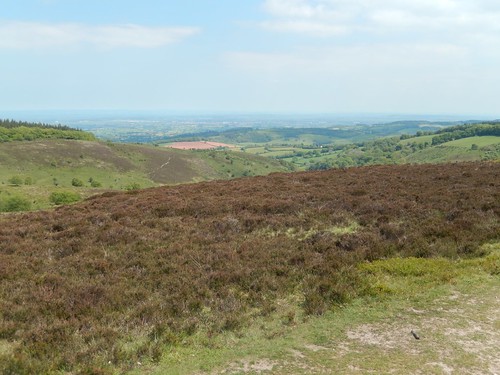