August was a month of many birthdays and it provided me with two opportunities to bake cakes for people. At the end of the month, I attempted to bake a chocolate orange cake for my sister’s birthday (it’s another BBC Good Food recipe). She likes chocolate oranges AND she likes cake… I was hardly going to bake something using green tea and KitKats! 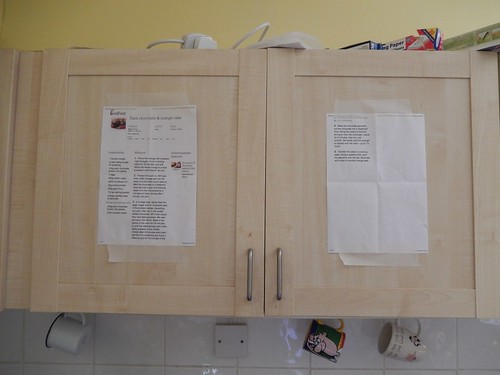 I started off with a new and slight-more-organised approach to reading the recipe for this one, by attaching each sheet to the front of a cupboard door with masking tape. A bookstand of some sort sounds ideal except that it would only consume more of my valuable and limited worktop surface. I had thought about how an iPad might be valuable in such a situation (no printing of paper) or even to use my smart phone but then, when your hands are, quite literally, caked, a touch screen is only going to become a hindrance.

A few days before I intended to bake this, I re-read the first sheet only to realise that I’d need to process an orange at the very first step – and I did not own a food processor; hence why I shopped around online and settled on the Russell Hobbs 18558 Desire Mini Chopper. It looked very compact and was only £15. 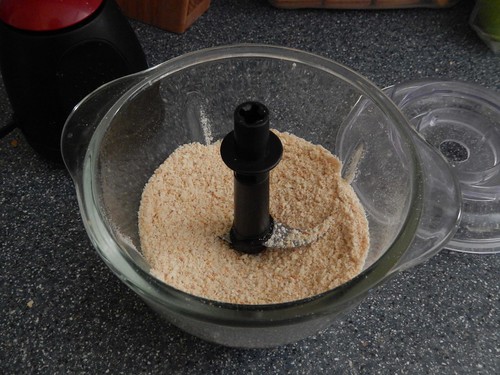 I’ve yet to do an awful lot with it but it’s proved to very successful at the very fine chopping of vegetables to accompany my pasta and, as you’ll see above; it easily reduced a dozen crackers to a consistency of something smaller than crumbs as I made my latest batch of Jamie Oliver’s burgers, earlier this week.

However, I was still somewhat at a loss as to how to deal with this whole orange… Even YouTube couldn’t tell me whether or not I was supposed to peel it first. Boiling it didn’t do much to alter the skin and so, upon my second attempt, I first stripped the fruit bare before boiling it on the hob. 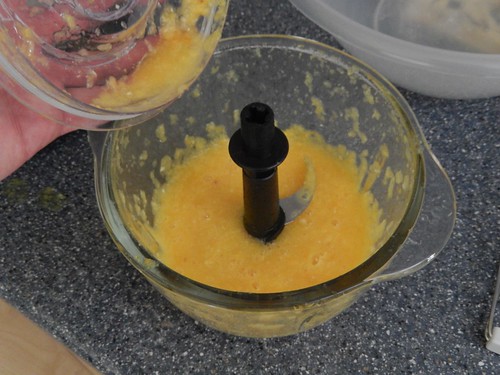 After that, it could be chopped a heck of a lot easier – had a pulsed it a few times more, I reckon I might’ve been able to refine the consistency even further.

I felt at a loss again later where the instructions simply state that you should ‘discard’ any pips… I failed at this, without further guidance. My sieve was far too fine and at the other end of the scale, I’m sure my colander would’ve only allowed it all to fall through. I’m sorry to say that they were still noticeable at the final tasting. I wasn’t to know that working with fruit could be so challenging!

How would you suggest removed seeds and pips from a puréed orange? 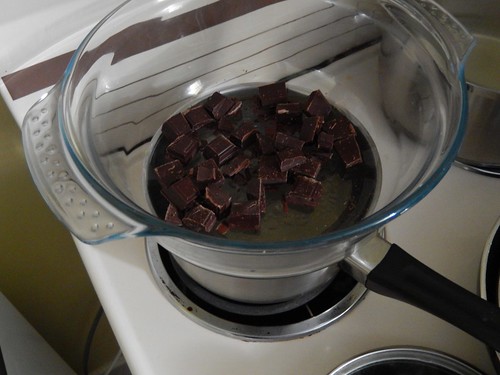 Chocolate was melted in the usual way, before being added to the rest of the mix.

I’d bought myself an excess of milk chocolate in 100g packets without realising that I still had a pack of ‘cooking chocolate’ sitting in the cupboard at home. I’m not sure how the two are different when you’re baking but the one on the left tasted very much like what I know was dark chocolate, even though it wasn’t clearly stated at any point around the wrapper. 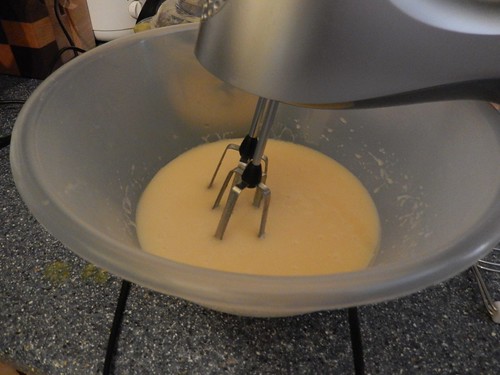 I got to use my fairly-recent hand mixer to bring the initial mix together. Although, I’ve just seen a video where the presenter suggests using a spoon to continue and fold the mixture by the time you’ve added the flour. Have it been doing it wrong by using this pair of whisks?

Then, it was on and in to the halogen oven – a little more on this later! 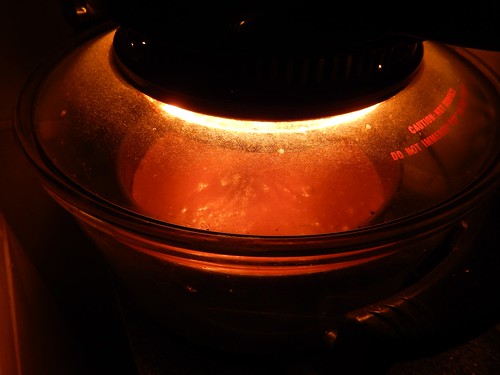 This was my first attempted cake recipe that was only made from a single layer and therefore required just the one cake tin. From here, I felt like I would soon be home and dry. 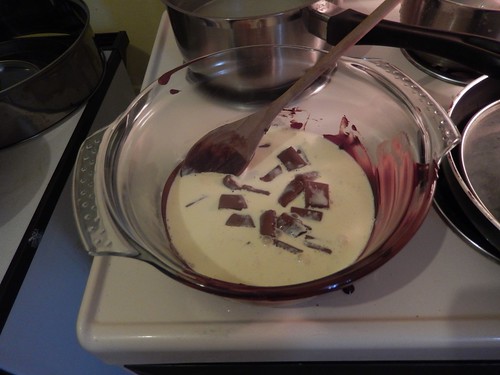 I was a little sceptical as I feared the cream may cool too quickly but it worked very well and provided the added satisfaction of being able to stir the gradually thickening mix as it cooled. 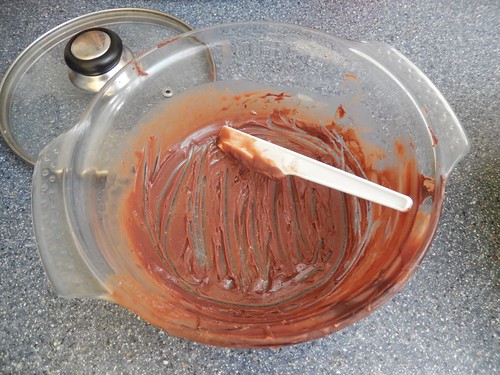 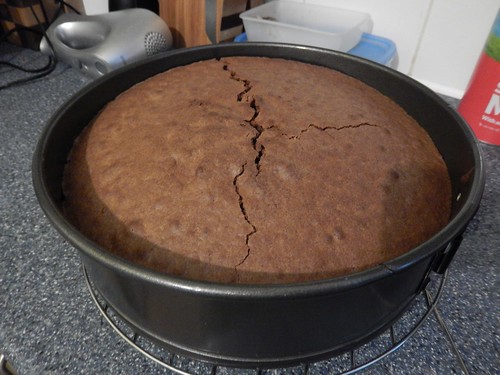 Out of the oven, my cake had apparently suffered a shift in its tectonic plates. Looking at it from another angle though: 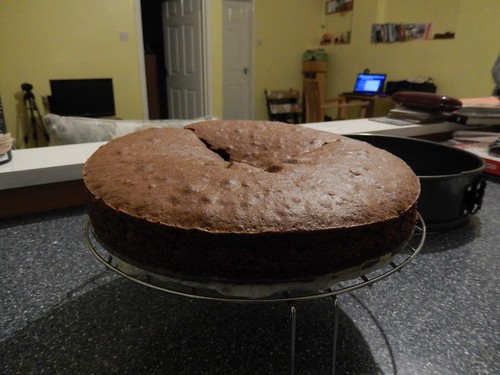 You can see a great depression or slump in the centre – almost identical to what I experienced with both attempts of the previous white chocolate cake. It was again, very soft, wet and almost ‘eggy’ inside. Almost solely in the middle.

I’ve discussed this briefly with a friend and I’m sat with the following possible faults:

This recipe calls for the use of plain flour, where self-raising may (rather blatantly) give a better rise.

It could be that I’m using a halogen oven (although, I know people do use them for baking).

I’ve been setting it on the lower shelf in my oven to prevent the risk of burning. BUT, I’ve been advised that in any oven, you should always bake on the top shelf. I also read a tip advising you to cover the top of a cake with tin foil if it’s beginning to brown too much.

As I touched on earlier; I may not be ‘folding’ the flower in correctly. 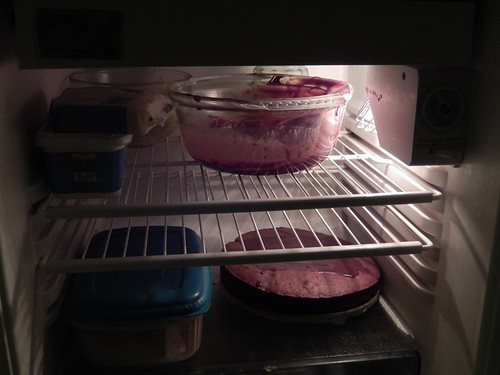 Within 30 minutes of cooling, both the cake and its icing were dashed to the back of the fridge in a desperate attempt to save it. Apparently, I could also have continued to bake it on a lower heat but had I poured the icing on at this stage, it would’ve made a far greater mess of my kitchen, over night. 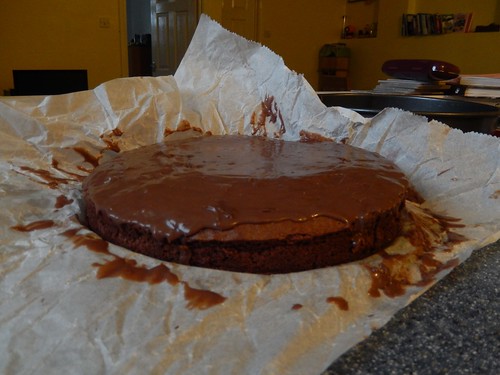 It was very messy and, I think, it barely survived the 10 minute car journey down the road on such a humid evening. To the taste, it was very rich. But for the persistent feel of pips, I could’ve easily eaten more than my solitary scooping.

If you have any thoughts on what might’ve gone wrong then I’d love to hear from you.