For too long, I’ve had to wrestle with my pots and pans when it comes to storage. I don’t like the idea of stuffing them down in a low cupboard or drawer where they’d be hard to reach (as a tall person) and would most likely end up unbalanced and ready to tumble. So, after scouting around on the internet, I came across a few wall-hanging solutions, which would suit my kitchen very well, with its limited worktop space.

In an evening last week, I took a trip to Ikea in Bristol and arrived home with a Grundtal hanging rail and a few hooks.

Although I spent a good 40 minutes wandering around Ikea, I spent less than £10 on all you see below.

With the hooks, I chose to buy one bag of each size, as I thought it might be convenient to hang certain items from different heights. There were three boxes holding all of these packs and yet the labelling underneath meant nothing, as I found one size mixed in with the other and it took me a minute or two of digging before I found the smaller 70mm S-hooks. 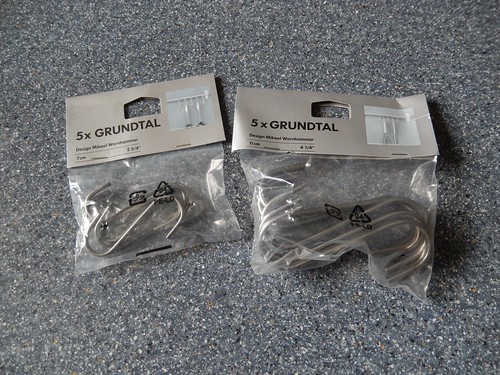 Once again, I avoided buying anything pretending to be wood, although some of their bowls looked nice. I did have a snoop through their offcuts bin (mostly chipboard) beside the car park with a repair project in mind but there was nothing to be found of the right size. For cheap furniture repairs and maybe even the construction of workshop cupboards and drawers, it may pay you to see if your local Ikea store has the same ‘help yourself’ bin as they don’t appear to charge for it (easy recycling, see).

If you might be able to supply me with a piece of white MFC (melamine-faced chipboard) measuring 1m long x 250mm wide x 18mm then by all means, please do get in touch! 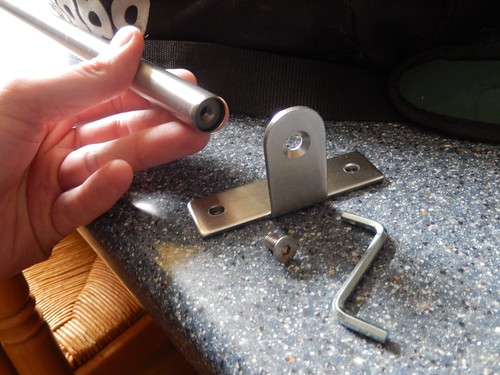 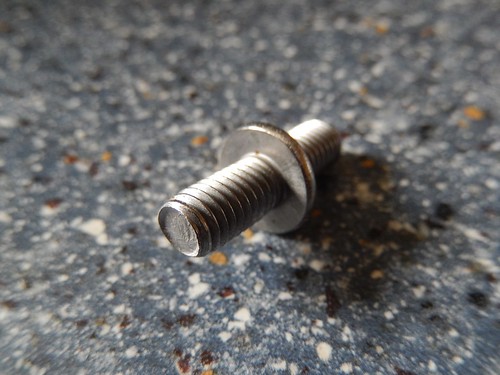 It came with this double-ended screw, which I assume would allow you to connect two of these stainless steel bars together. A nice idea, however, this doesn’t appear to be mentioned anywhere on their website and I didn’t notice it in-store either. 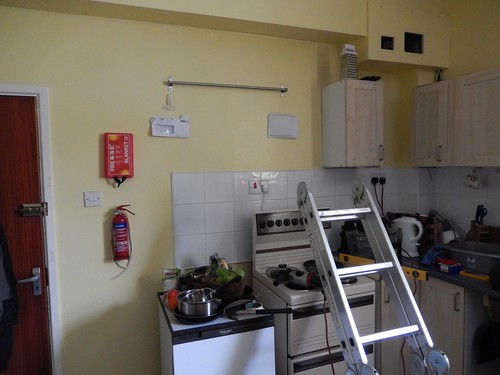 Installation was easy for anyone competent at drilling holes in a wall (yes, I’ve received my landlord’s permission to do this).

I used masking tape to mark out the location on a tangent between the end of the run of tiles and the top edge of the lone wall cabinet. 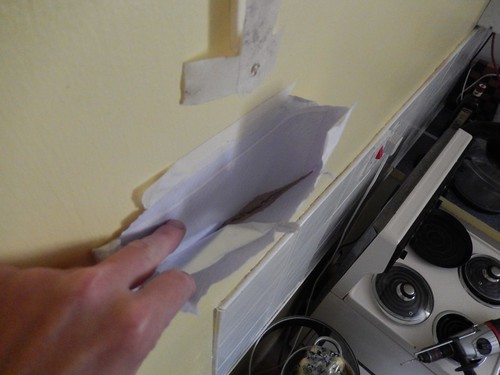 You may also notice that I used the envelope trick to catch most of the masonry dust – a tip I picked up from one of The Ultimate Handyman’s videos. 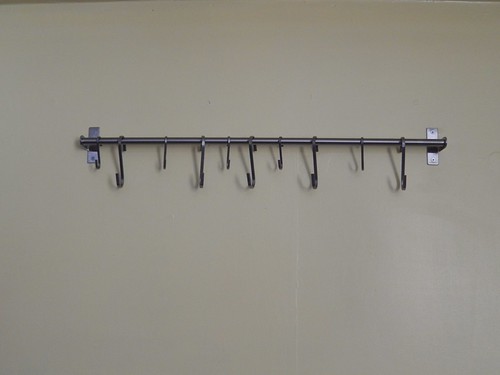 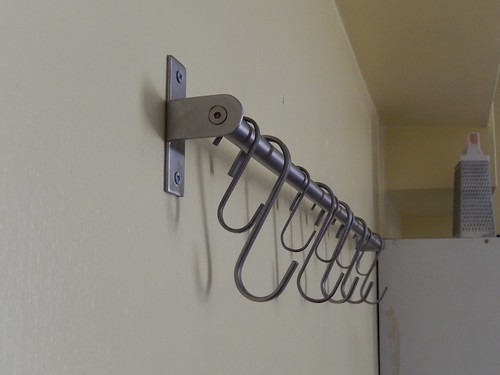 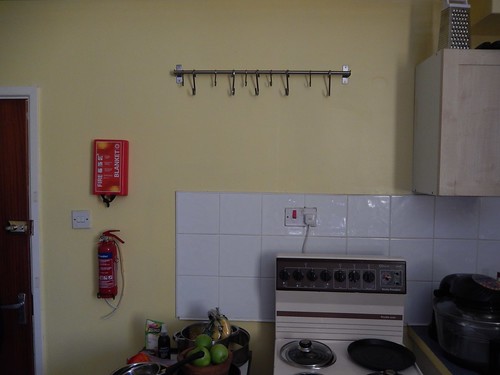 I could’ve made something from wood but it would’ve cost me more in time alone and, to be fair, this is quite minimal and perhaps even elegant. 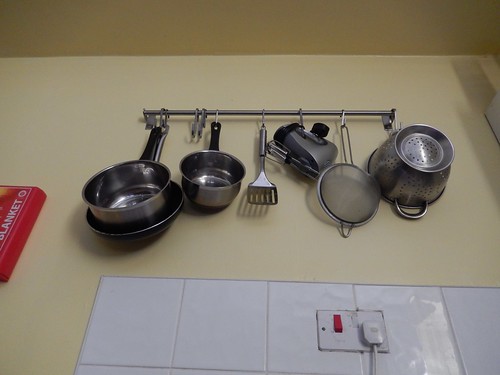 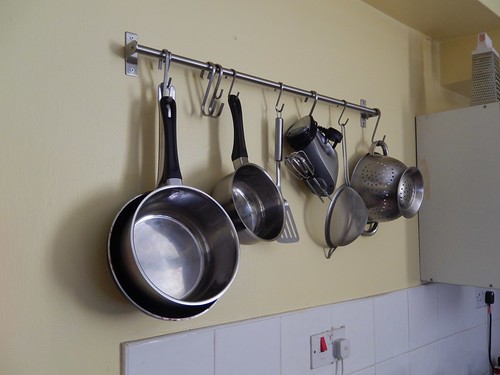 I don’t plan on going ‘pan crazy‘ at any point and you can already see that I’ve had to stack the larger saucepan inside or over my frying pan. It is nice to have somewhere to hang the mixer, which otherwise lives without a home. I may add a griddle pan to my collection at some point but then I do most of my grilling in the oven, where you can allow the grease and fat to drip underneath. 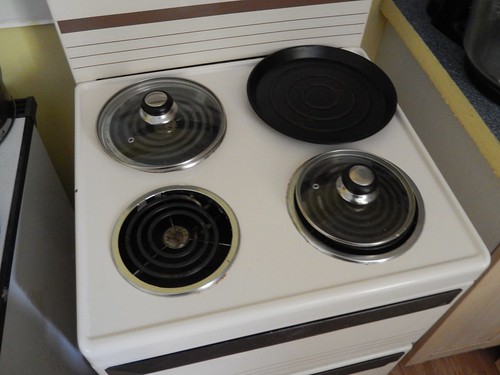 It’s also within my intention to find a proper home for my saucepan lids and perhaps even a couple of baking trays or oven racks. It would be futile now to simply dump them on the fridge-top space I have now created.

Walking around Ikea (having already reached this conclusion from their website), I was surprised not to see any solutions for the hanging and storage of this lid. My research suggested that they might’ve sold something in the past, or at least outside of the UK. But the closest match to what I’m looking for can be found here, at Amazon. It looks alright; I’m just put off by the price at the moment.

Perhaps I should instead look for a stand that sits on top of my fridge?

One issue I have with the fridge is that condensing moisture will settle on top of the cold surface on top after I’ve been boiling water (making pasta) on the hob. This happens even with the extractor fan left on for an extended period of time (it’s high up on the adjacent wall).

My first thought is to obtain a plastic sheet of some kind and lay it directly on top. Thinking about it, I could even have used some of that “wood” from the bin at Ikea! I have a great adventure recently as I set out to defrost my ‘Arctic’ fridge with a pan of boiled water… But there’s no room left here to tell you about that (maybe next time).

This weekend’s been quite a productive one on the DIY front and I’ll have more to share with you in the coming days.