This is something I’ve been working on for a couple of weeks now – that is to say, that I started it a fortnight ago and, although I’ve not been working on it solidly or with any kind of routine, the work is still very much in progress.

After creating an agreement with my landlord, I’ve begun to look at the cause of the damp patch that has slowly grown beside the shower in my bathroom and to move forward with the rectification of this problem.

For the first few months of my tenancy, I didn’t use this shower for the simple fact that the bathroom had no source of heating whatsoever (I actually moved in one year ago this month). Even before I started using the shower) once a heater was finally installed), signs were evident that a problem had occurred here previously (bubbling plaster and paint down one side of the shower; swollen wood had been painted over). When it came to begin tackling this job recently, I remained somewhat optimistic that it might be a simple case of replacing some of the lowest tiles and renewing the grouting of both walls. 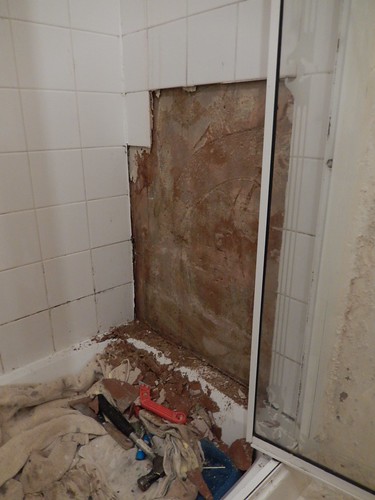 I began by removing the tiles that were so obviously loose. As you pushed on them, you could see them flex. In fact, along the bottom run, pushing one revealed a weakness in the wall behind as others moved with it. I kept a hammer by my side but it wasn’t necessary. I levered each tile off with a screwdriver and, with that, quite often came a layer of tile adhesive and plaster. 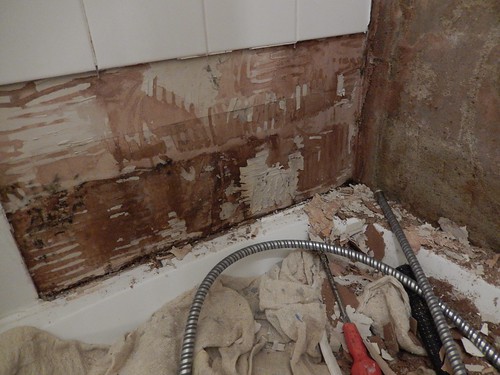 On the adjacent wall, things didn’t look a lot better but it was plasterboard (drywall) behind and clearly, this had also been suffering from over-exposure to the wet stuff.

It seemed as logical then as it does now that water may’ve seeped through gaps and cracks in the grouting and gradually soaked in to the walls behind. This would go in hand with the fact that I replaced some of the silicone sealant only a few months ago as it was loose and horribly discoloured. 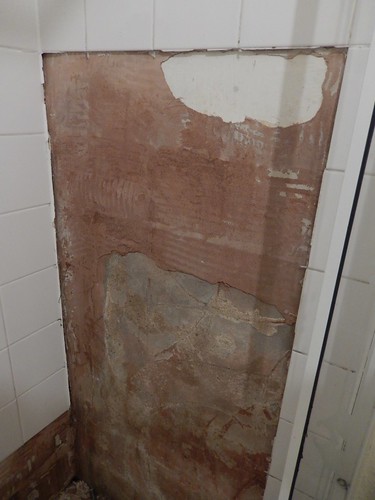 Higher up on the right-hand wall and where the skim coat of plaster remained in tact, I could tell (by knocking) that the wall behind was hollow – although this may well be another alcove, of which several others feature on the same wall of this property.

I’d already removed a number of tiles greater than I’d initially anticipated by this point. To get the others off though (that is, those also affected by the ‘leak’, lower down) I’d have too remove the entire frame of the shower, as both walls had been tiled in advance of fitting the cubicle. 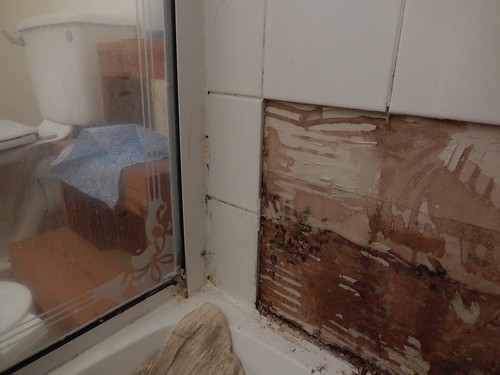 Down in the bottom left-hand corner, I noticed a crack in one tile running from one of the fixing points, which could have encouraged the problems I am currently working to overcome. 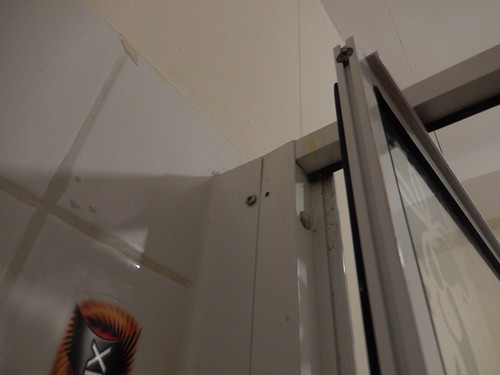 I hadn’t removed (or even fitted) a shower before but after close inspection, I could see how the construction was screwed together; each side panel slotting in to a channel-section fixed to each wall. This was mostly straight forward, but for cutting through the gum of silicone around the bottom edges both inside and out. 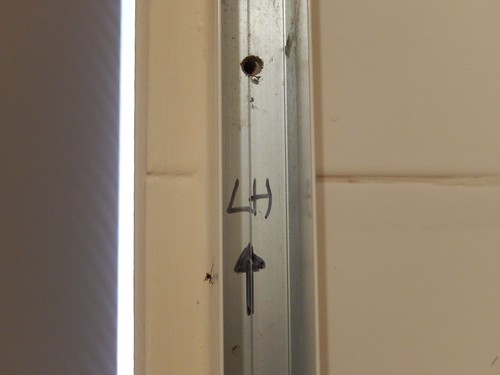 Before removing the channel sections, I marked each one on the inside so that I could later re-install them in the correct orientation. My intention was to re-use the screw holes through the existing tiles…

But DIY repairs are seldom ever so simple! 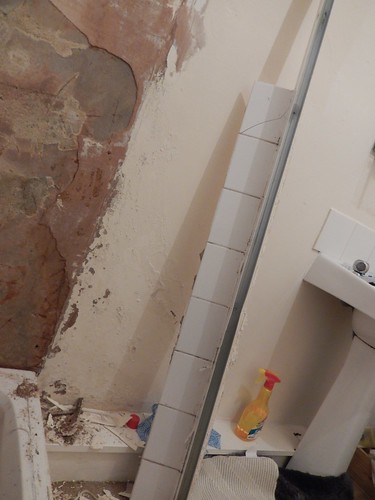 On this occasion, I found that the ‘installer’ had not only run a bead of silicone down each side to prevent the ingress of water but they’d also bonded the back of each section to the tiled wall!! I lost even more ceramic and I know now that I’ll have to drill at least 6 new holes through the replacement tiles when I come to refit it. 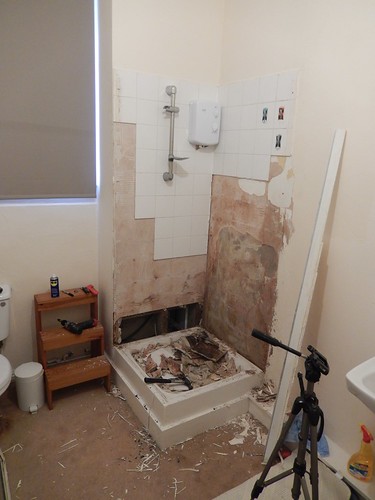 As I removed each one in turn, the screws varied in length from 32mm right up to 65mm! 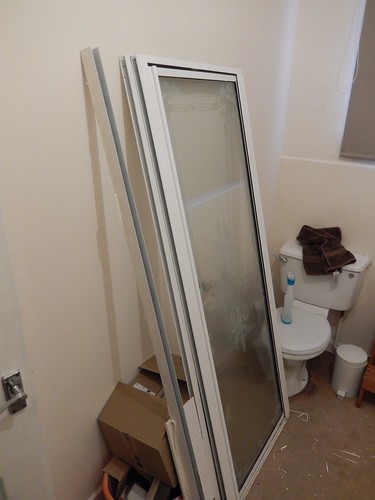 Cleaning off this old silicone on the few tiles left behind is a job I’m leaving until a later date although, I’ve heard that WD-40 is meant to be good for this. 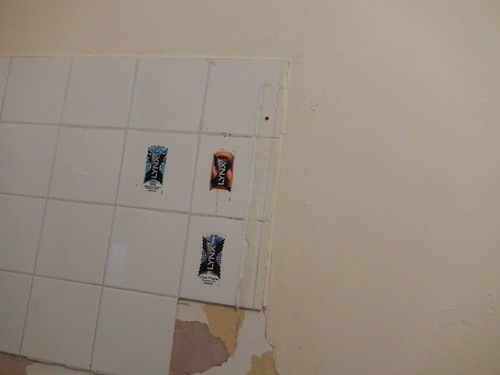 Below, you can see how much plasterboard was removed: 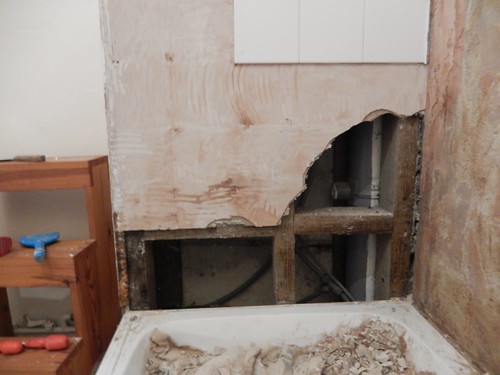 I’m not going to be replacing it with the same material as I’ve been advised to go for a cement-based panel product and to apply a waterproofing primer. Although the timber behind was sound and there were no visible symptoms or rot or even mould, I’ve since decided that the framing here is inadequate – the very last thing you want in a shower is a springy wall to tile on!

I gave the cavity behind a good vacuuming to clear all the debris (I hate when people leave their mess behind as this is the kind of think that can attract damp in a property before it spreads further). 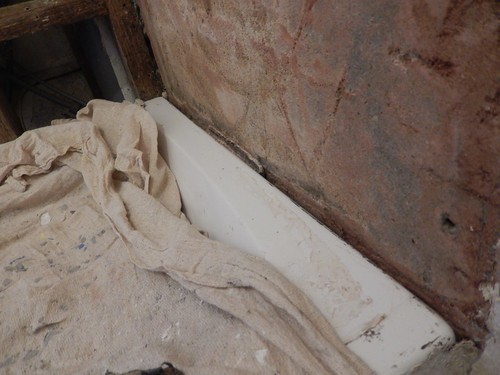 Down one edge of the shower tray (the base), I found a series of scrap strips of ceramic tile, stuffed loosely in an attempt to fill the gap!

As the damaged materials were cleared, I wheeled an oil-filled radiator in each night, so that I could attempt to increase the speed of the drying-out process before continuing with the repairs. Although, it has to be said that the walls weren’t too wet as much as they had moisture on their surfaces. 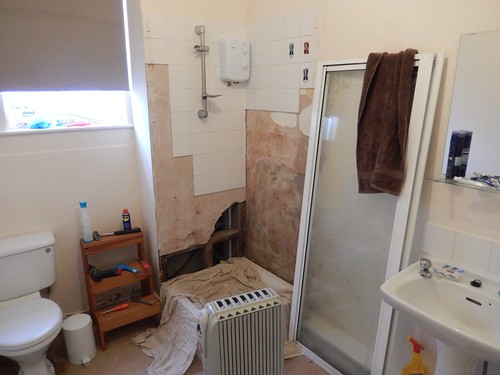 I’ve actually moved on much further since and within the past week. I’ll have a second post for you in a few days and I’m aiming to have the entire job finished and the shower back in to full function by this time next week – even though I’m aware I still have a lot to do at this stage, not to mention the necessity for various drying times and the receding temperature at this time of year.

None of this is quite as dramatic as my last bathroom repair however, where a portion of the floor disintegrated!