One thing I’ve missed since leaving home is the regularity of roast dinners. I hadn’t honestly given much thought to making my own until I start trying new things in the kitchen this year. So, without actually doing anything thorough research or looking for a recipe, I’ve come up with a meal that’s suitable for a single person and can be easily adapted to suit tastes and preferences.

Furthermore, it comes without black plastic packaging or a need to use a microwave!

A traditional roast dinner largely consists of vegetables. All that would’ve put me off in the past is the prospect of cooking an entire chicken (or pork, lamb, etc.)… Which is quite ridiculous, considering that it would take me an entire week to then consume the leftovers by myself! So, I chose to simply that piece of the process by using pre-cut skinless chicken breasts. 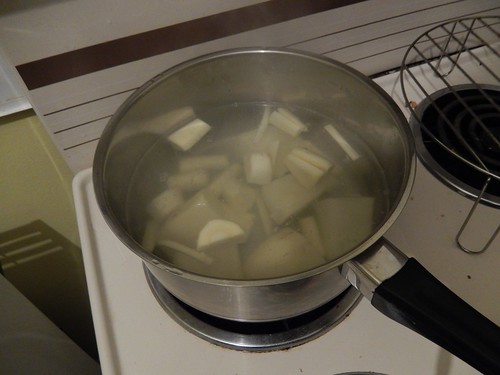 I started by peeing the potatoes and parsnips, as seen in the first photo. These were then dropped in to boiling water to soften them for about 10 minutes.

Having just repeated this meal this past weekend, I can say it’s possibly not necessary to soften the parsnips before roasting them. I buy large baking potatoes because that’s what they have available loose in my local Lidl. Those carrots were the last from an old bag and the black stuff came away with the peelings.

Where I’ve used the hob to boil vegetables, I intended to do the rest of the cooking (bar the gravy mixture) in the halogen oven. As I’d forgotten to remove my chicken from the freezer and defrost them in time, I decided to use one ‘Heat Dry’ preset on the halogen oven (90°C) and warmed it for about 10 minutes to break the ice inside (this was done in advance of the peeling and boiling above). 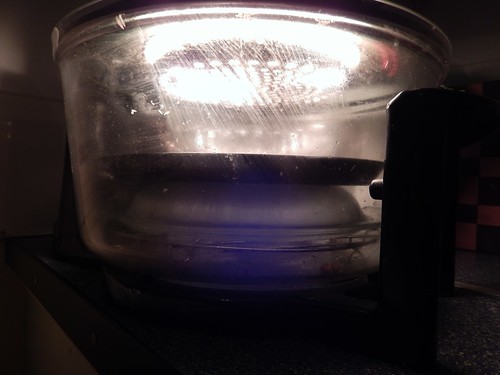 On my first attempt at this meal, I think I used the low rack and roasted everything on top of a tray. This worked quite well but I was still curious to see how it might differ a little higher up… So, I placed a casserole dish lid on top of the low rack, as I have also been doing with cakes recently. 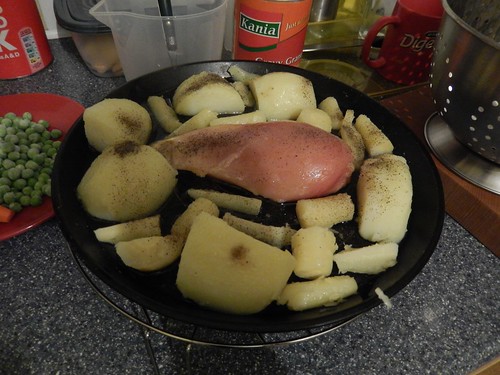 This might be one situation where the haolgen oven is only suitable for a single person… Either that or, you’d have to either cook the potatoes differently (yuck) or put one load in a separate oven. But I basically flooded the baking tray with olive oil and then drizzled some more over the lot.

What I’ve also done this weekend was to wrap the chicken with streaky bacon – but for my broken camera, I’d be able to show you that! 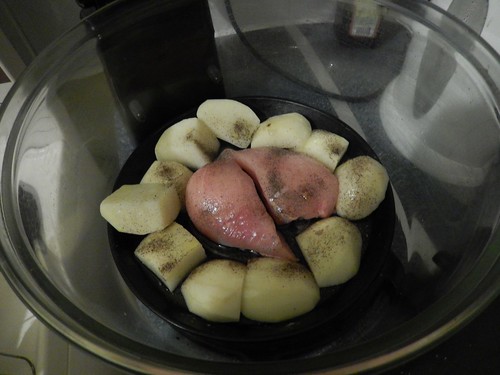 See, on my first attempt, I was feeling greedy and (without the parsnips) decided to add both breasts of chicken and a second baking potato… I was certainly filled by the end of the mega-meal but with so little room to spare on the baking tray, the potatoes didn’t quite crisp as I tend to like them. 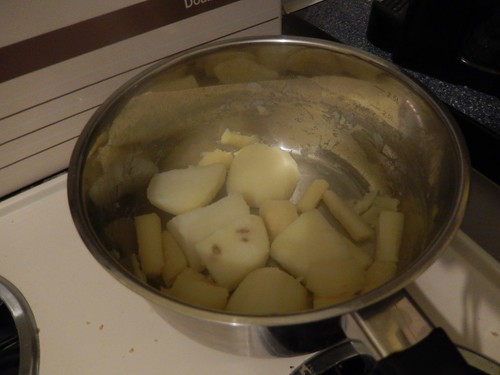 Vegetables were removed from the boiling water as soon as the potatoes had begun to ‘crumble’ softly around the edges. Along with these, I added the parsnips to a tray with the chicken in the centre and set the oven to roast for 30 minutes. 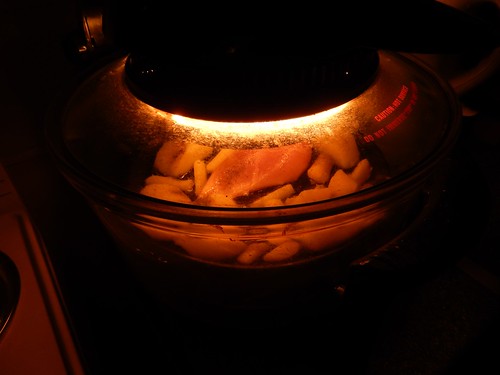 Most sources would probably suggest a temperature of 180°-200° but I went a little bit higher, after my first experiment (and as I often find you have to with meat in this oven).

After 15 minutes, I turned the chicken over to ensure the other side would also be cooked through and moved the potatoes a bit to check they weren’t sticking to the tray. But I still left them with a flat-face down and round facing upwards, so that they would crisp around the edges. By now, the parsnips had already begun to shrink and so there was a little extra space around the chicken. 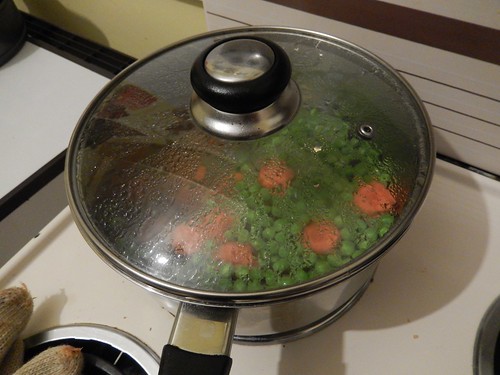 While that was continuing on, I got to work on the carrots and peas. First, I boiled the peeled and sliced carrots for 5 minutes, after which I added the frozen peas to the same pan and boiled for another 5 minutes (I like to try and be economical, since this is a meal for one). 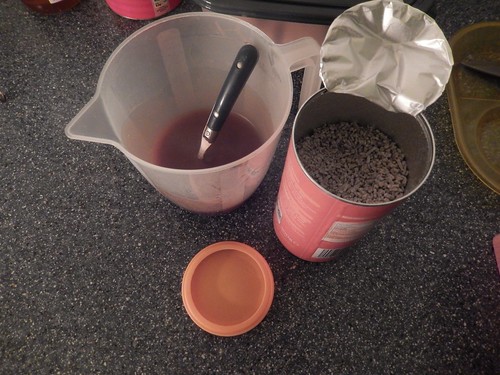 With 5 minutes left to go on the halogen oven, I boiled some water in the kettle and made a chicken gravy with these granules. They recommend 4 heaped teaspoons but I added an extra 2, since I like my gravy slightly thicker. 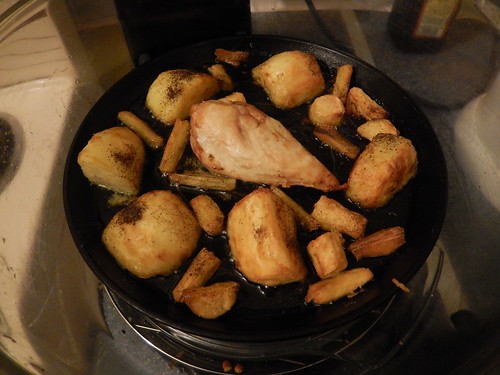 I added an extra 5 minutes to the timer on the halogen oven to ensure it was all crisp – another great feature of this oven is that you can watch food cook without disturbing it or the temperature inside. 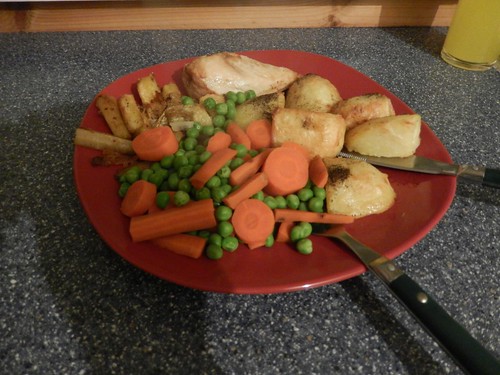 I’m sure I could add even more to this and I welcome any suggestions but here is a shot of before and after applying the gravy. 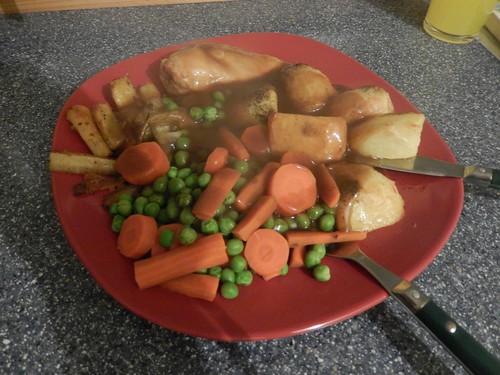 It took only one hour to complete this meal including the preparation of washing and peeling the vegetables… Then, it took only another 5 minutes before the plate was clean again!!

Thanks for reading. If you haven’t made yourself a roast dinner before, do have a go because it doesn’t have to be complicated.

One thought on “Roast Dinner for One”