Two of my favourite ingredients baked within the same oven! This was the same cake I baked during an unofficial ‘Cake Day‘ with a friend back in October – see, I want to say ‘last month‘ but already, it seems December has crept upon us. My first attempt wasn’t without a little disappointment but that fuelled me with the necessary preparation for this effort. 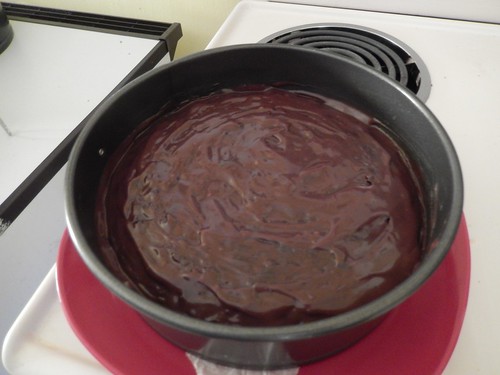 If you’re interested in baking this one for yourself then you’ll find the recipe that I used by clicking right here. 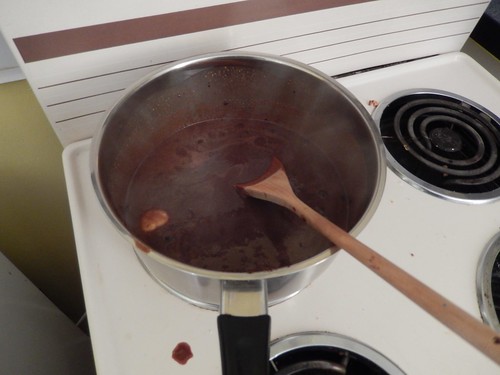 I am the kind of person who buys a bag of raisins on a weekly basis. Sometimes, that one bag is not enough! They’re a healthier alternative to stuffing myself with crap in these long, cold evenings and they can be added to one of many different deserts. 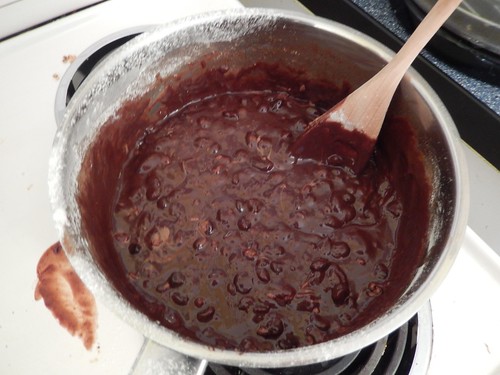 It’s a little bit of a strange start to this one as I’d become accustomed to baking cakes in a more ‘traditional’ order. But here, you begin by boiling about half the ingredients on a hob or stove. Once that’s cooled, you can then add the flour, raisins and the real chunks of chocolate to accommodate the powder. 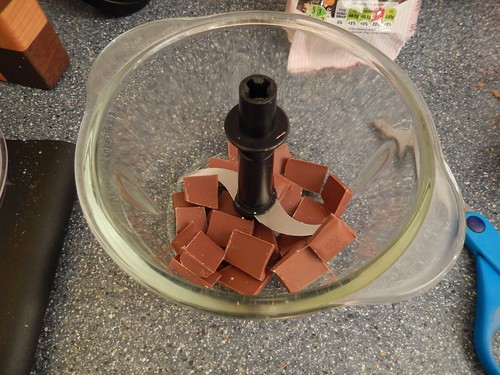 This is where, yet again, I get to share how brilliant my mini chopper is at reducing the good stuff down to pea-sized pieces: 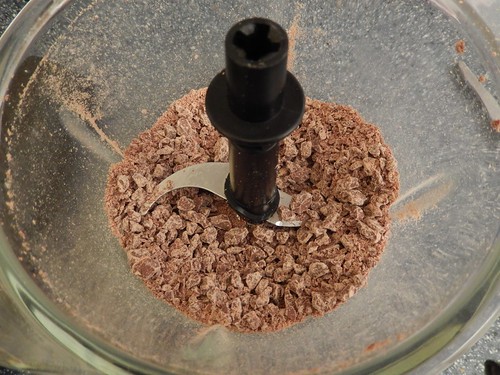 I made a rather daft mistake before I’d even unpacked my bags from the supermarket, as I’d somehow ‘missed’ the packs of the seedless raisins, only to instead add a bag of mixed fruit (which does, admittedly, include raisins) to my trolley. I certainly didn’t notice as I hurried them up on to the counter for scanning either. 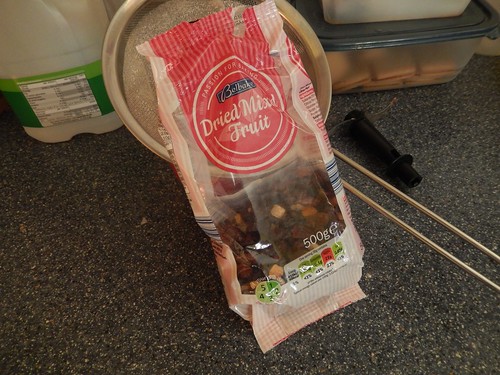 In cases such as this, I could always fall back on my ready-made supply of chocolate-coated raisins… I certainly do not buy enough of these so, I have to fight a great temptation in order to make them last! 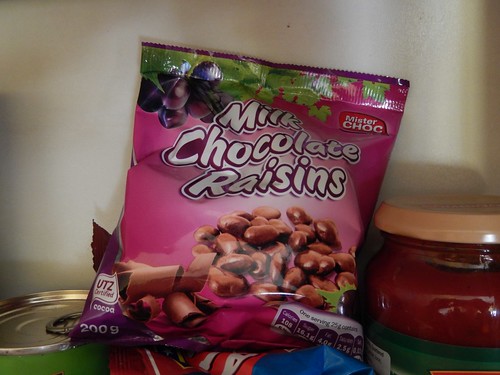 As with my previous lemon drizzle cake; I adopted a ‘medium-height‘ setup inside my halogen oven. Where the high rack is too close to the heat source for my liking, I again seated the lid of a casserole dish on top of the lower rack. 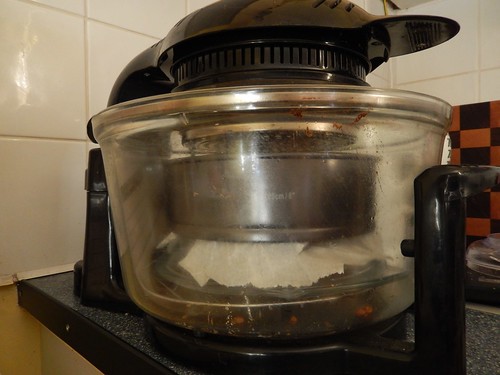 My baking tin does in fact look very close to the top of the oven in this picture but, I can assure you; it would otherwise be even higher and almost to the point of touching.

I’m also going to point out that I only lined the base of my spring-form tin with paper. I’ve tried lining the sides in the past but for me, it just creates further complications when the times comes to remove the baked cake. I probably did grease the insides with butter, though. 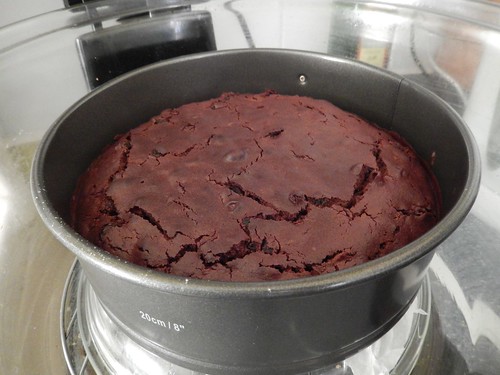 It’s quite shocking to note that they recommend a cooking time of a full one-hour for this recipe. In my halogen oven, I knocked a good 10 minutes off. In fact, I think I also increased the temperature by 20° in order to reduce the risk of the cake not cooking right through. In any case, I think I still had to complete a full hour of baking but in spite of the heavily-fractued on top, this one came out very well indeed!

This cake is also iced in a manner that was unfamiliar to me.

You heat the cream up on the hob (I went for single cream, without a specification) and then pour it over the remaining squares of chocolate, slowly mixing until it all blends together.

On attempt No.1, I was not happy with the consistency and decided to add icing sugar to thicken it up… This helped eventually but the end result, in my opinion, was that all the added sweetness overpowered everything buried underneath. 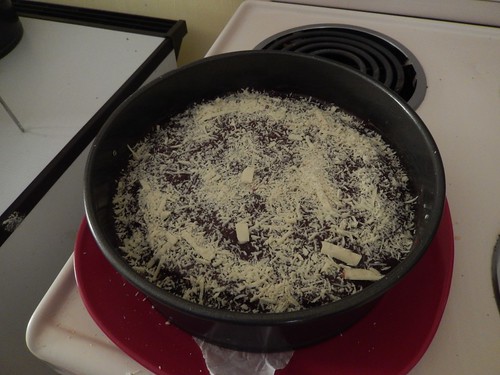 This time, I took a more considered approach and basically added more chocolate to the cream. I go there in the end but perhaps I’d have reached the same point sooner had I used double cream? Again, the recipe does not clearly state this. 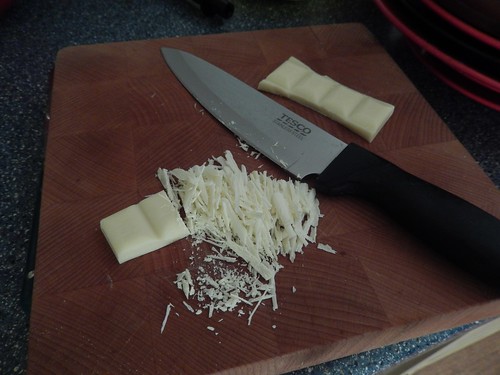 To decorate, you can then add slices of white chocolate, sprinkled over the top. I decided not to add extra raisins on y second attempt as I’d felt it was a bit over the top – even for a raisin-loving freak like me! 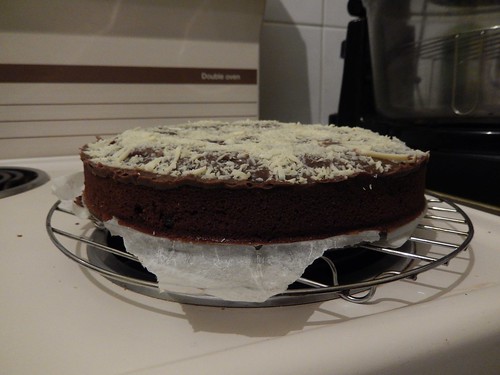 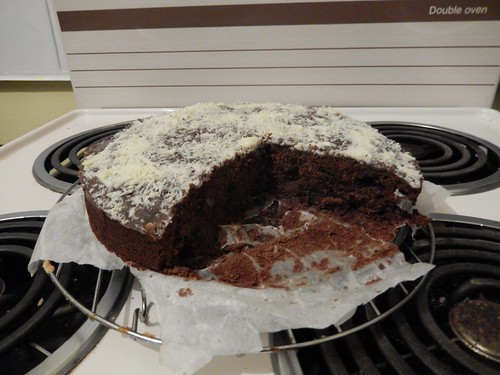 This went down so well I decided not to share it! 😉

I’ve already done my shopping for this week and I’m saddened to reveal that I’ve not added a single baking ingredient to my cupboard(s…). Still, I look forward to my next cake-baking effort (hopefully one I’ve not done before) and, even further ahead; to the day when I can create my own recipes! 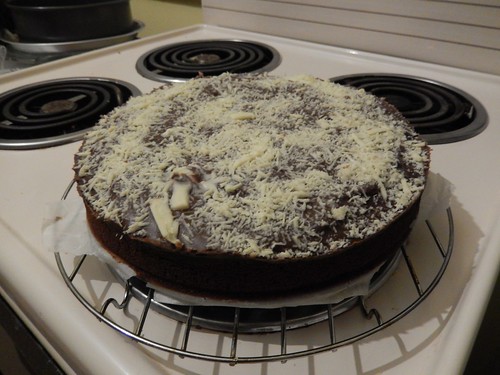