It was Christmas. I was cleaning the bathroom, focused, at this moment, on the Ikea Fullen mirror I installed only a few months ago.

Wiping the glass was easy. But the shelf, well, the design doesn’t allow it to be fixed firmly to the brackets. I’ve been very careful in the past to clean it with extra care but, on this occasion, something went wrong…

It didn’t take much force and I’m still not sure how it happened but, in a split second, I witness the glass shelf tilt and slide down to the sink – next thing I knew, there was an audible crash and tiny shapes of glass absolutely everywhere!

Pausing for a few seconds afterwards, it took a while before the reality of what had just happened kicked in. Most of the debris was in the sink and, to their credit, there were no jagged shards and I was unharmed. Other pieces somehow made their way out in to the living room – even after vacuuming that same day, I still found in my carpet yesterday, about a week later.

I followed the instructions perfectly and there is no means of fixing the shelf to the brackets. I’d been aware of this potential problem for a while and I know wish I’d just glued it on with silicone. Ikea’s website is unclear on the availability of spares but, in the mean time, I’ll probably just varnish a piece of plywood to sit there for now. 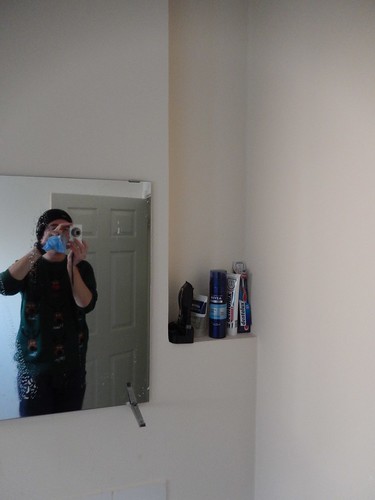 Another thought would be to make better use of this alcove to the right of the mirror but that would still leave a good 4in of metal (brackets) sticking out above the sink.

How many Ikea items have you broken?

If you have any tales of shattered glass then I’d love to hear them!

5 thoughts on “One Glass Shelf”