Over the weekend, I received a air-fryer attachment that quite simply allows me to fry foods in my Andrew James 12lt Halogen Oven

and in manner that’s considerably more healthy than allow something to sizzle in a pan of boiling grime. 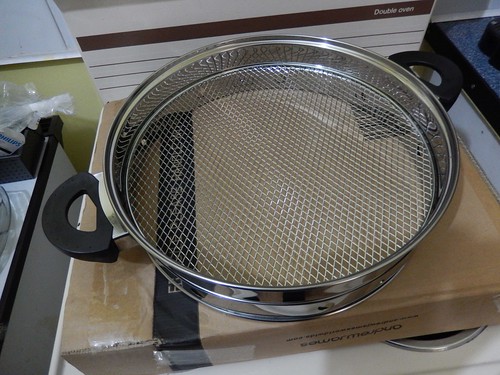 There wasn’t anything in particular that I desire for Christmas this year and then, a few days after the main event; I suddenly take an interest in an accessory for the unconventional oven that I’m learning to love. You can understand why I had to buy it! While there are cheaper versions available, you’re only saving £1 on average (in the UK) and so, I decided to stick with the Andrew James Air Fryer Attachment

, which includes a warranty as well.

As I mentioned in my previous post; I could’ve done with this a day earlier and perhaps saved a few sausages from a firey and premature demise.

Despite arriving in the original packaging, it came without a set of instructions – but, if you are also hoping to find some written guidance then you can click here to download the official .PDF manual. Unfortunately, this text still doesn’t guide you on when to open and close the vent holes – perhaps this is something more experienced cooks are already aware of?

It couldn’t be much simpler as an item and the grill/mesh lifts out easily for cleaning.

As you can see above, it sits at almost exactly the same height as the extender ring

(riser) supplied as standard with the oven, which raises height of the heating element and simultaneously increases the cooking capacity inside the bowl. I almost wish that the extender ring was also an optional accessory, as I doubt I’ll be using it again, now that I have the near-identical fryer, which includes a pair of handles to prevent accidental burns.

While searching online for the instructions, I did a little research around the forums and there’s some debate as to how effective this add-on truly in. Some believe it’s too close to the heat source and will indefinitely burn your food. In which case, some also recommend placing the riser ring on top of the air fryer, to further increase the capacities – this would only apply to halogen ovens that comes with the removable lid. Others suggest buying a simple basket from another manufacturer and sitting that on one of the racks inside the glass bowl.

There were fewer people singing the praises of this accessory; many stating that it would be ‘unsuitable‘ for an oven like mine, which has a hinged lid that is only height-adjustable to its limit. I wasn’t about to put it back in the box and request a refund though, as people will too often take to disclosing their opinions when they have something negative to say… If I was going to decide for myself, I would have to fry something! 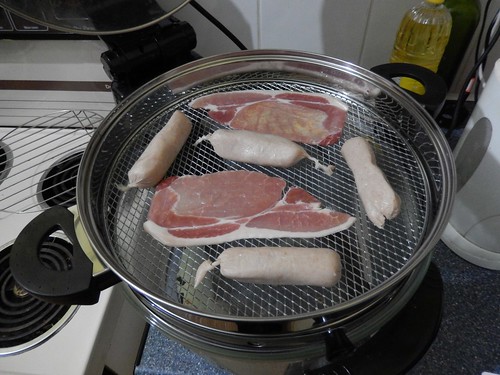 Along with my last pair of bacon rashers, I also had four sausages that had reached their expiry date. With Saturday lunchtime approaching, I could look forward to a real sandwich for the weekend! 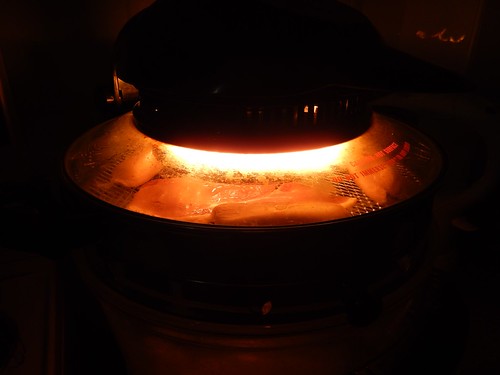 I drizzled a little oil over the top and set the oven at 200°C for 10 minutes. 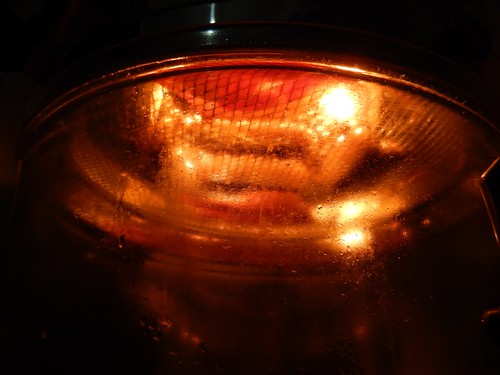 It took another 4 minutes before the light first cut out (my usual indication that the oven is pre-heated) so, I’m sure now that it would’ve paid to have pre-heated the oven in advance of adding the meat (as you would do with a frying pan, of course).

Air-frying, in general, is regarded as being a much healthier way to fry your food. In the instance of the halogen oven I use, the fat (along with the excess of oil) drips down through the mesh and collects in the bottom of the 12lt glass bowl, as you can see in the photo above… Not a pretty sight, I thoroughly agree!

If you’re frying food by a more ‘traditional‘ means then I would like to encourage you (for the sake of personal health) to try something different. By no means is the halogen oven the only option available. You can buy stand-alone air-fryers and I once wrote a post about microwaving a bacon sandwich in a plastic drip tray. 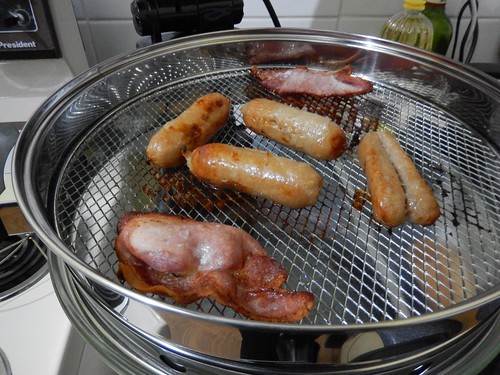 Ten-minutes was plenty of time for the bacon (too much, even) but it was just about apt for the sausages. With less fat, you do sacrifice some of the flavour but we eat these meats for the core and not for the slimey residue.

I do not dare attempt a Google search to determine people’s victor of ‘Sausage Sizzle Vs. Bacon Drizzle‘… 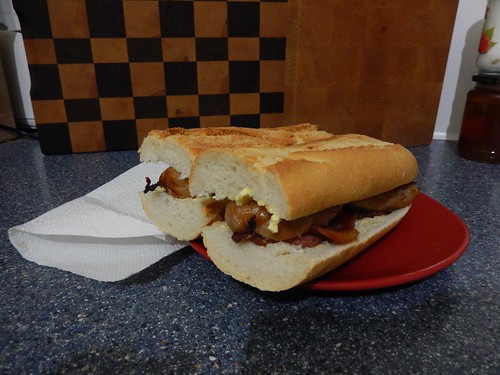 I’d not fried sausages in such a clean manner before. They did taste a little different yet they were still almost entirely familiar. I now look forward to trying other exciting items (once I’ve given the grill a good clean). 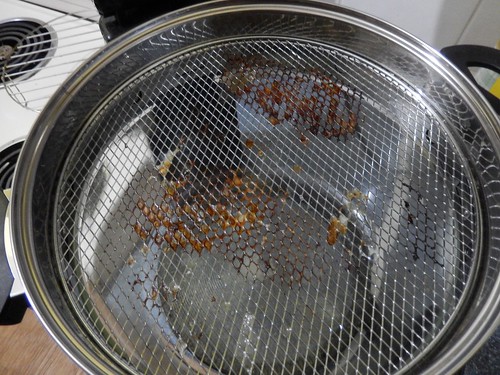 Thanks for reading and never let someone tell you not to eat something; just find a healthier way to prepare it!

Tomorrow, I think I’ll take a break from discussing what to do with a processed pig and to instead write about the lengthy walk I did last Wednesday.

19 thoughts on “Air Frying (with a Halogen Oven)”