Here in the UK, we’re supposedly in the midst of an extra-cold spell that’s likely to last the next two-weeks. Waking up to scrape a light frosting from my car windscreen each day… This only feels like what winters were like only a few years ago, before they started to emerge almost mild, by comparison. 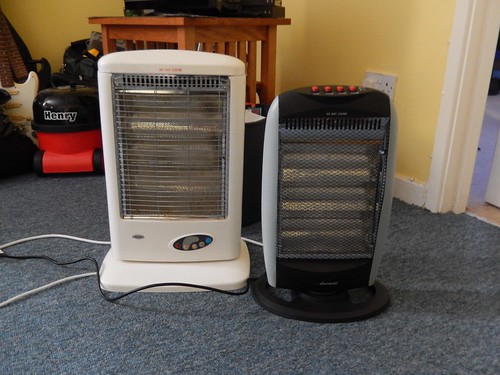 I recently wrote about my preference for the addition of halogen heaters in my home and, on Saturday, I added a second to my growing collection. A day earlier in Lidl, I spotted something else that could help to brighten up my kitchen…

That new heater (in black) is undoubtedly smaller than my old one but it doesn’t feel any less significant in the heat it is able to output. I bought this at a local hardware store and payed perhaps £6 more than I would’ve done online but I was able to pick it up the same day and I do prefer to help out these small and local stores when I can. 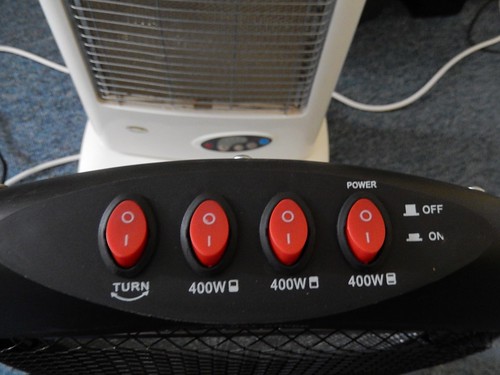 This smaller model has already become my favourite, as the white is shipped in to the bedroom. Each switch is very easy to use and, perhaps best of all, as far as I’m concerned; it does not beep at you. That white beeps each time you touch it, move it, press something or just turn it on. Black is silent and, for your secondary bulb, you have the option to select either the top of bottom bulb (the middle one is mandatory for the heater to switch on).

So, to what I found in Lidl… 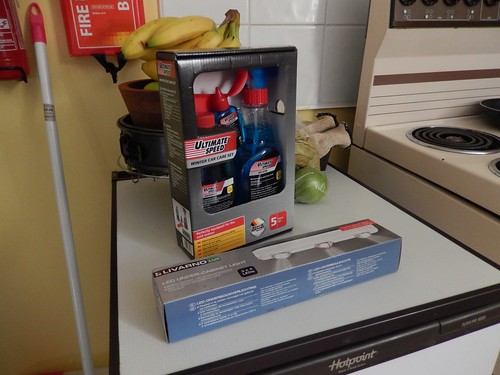 First, was this winter care kit for your car. I was in need of some more de-icer. It may turn out to be a load of rubbish but I was grabbed by the inclusion of a bottle of anti-freeze. I actually spotted this a week earlier, when it was £5.99 but decided to wait and see if it would be available seven-days later, as I’ve noticed certain products can receive a steep price reduction in such a time period… Lo and behold, I bought it for only £2.99! 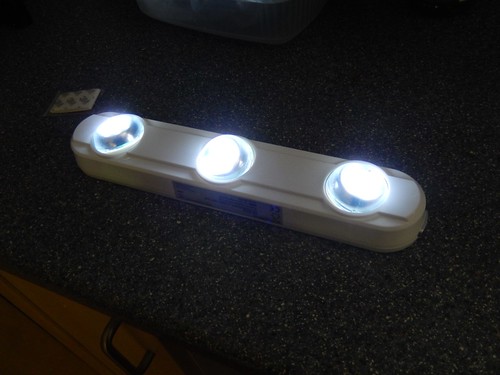 I think they were £5.99 each but they had these battery-powered LED under-cabinet lights. Exactly the kind of thing I’d been looking for elsewhere! I must’ve been looking in the wrong places as all the others I’d seen were only motion-sensitive or needed to be wired in to the mains… These cheap ones have a firm (but plastic) on/off switch and can be fixed using either a pair of self-adhesive pads or small screws. 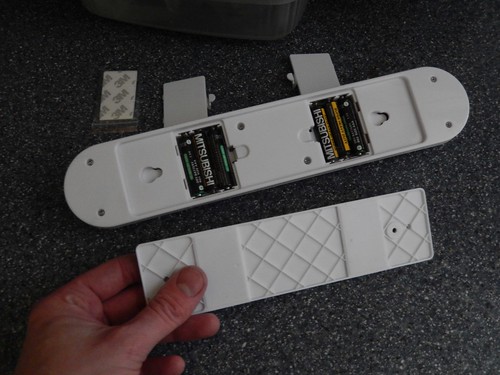 Installation is simple, as this back cover slides out easily can be attached to your cabinet independently. It also allows you access to the compartment which stores no fewer than six AAA batteries to power this small unit! I was quite surprised and very pleased to see these were included though. It even comes with a couple of short screws, as well as the adhesive pads.

For the placement, I was thinking of locating in closer to the rear wall, in the hope that the ceramic tiles would reflect some of the light. But what was most important to me was that I allowed enough room for my mugs to hang! Plus, the cabinets only hang over a fraction of the worktop, meaning that light would be more beneficial towards the front of the units and I positioned it centrally beneath the double doors.

Lidl had another slight variation on this design going for the same price, where my globe-shaped bulbs were more like conical spotlights.

Push the power button once to activate the lights and they’ll arrive at full power (above). Push that button once more and they’ll switch to a low light setting, which you can see below (I think the LEDs are very slightly clearer but the lighting is still good). They’ve also got the cool white/daylight glow that I love so much. 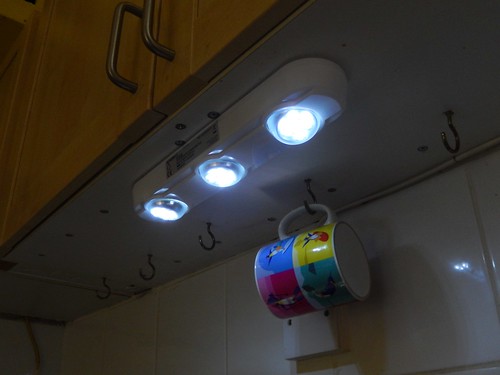 It’s going to take me a little while to adjust and to remind myself that I now have the option of added lighting when I’m preparing meals. I’ve been working in near-darkness for so long that, well, we learn to adapt, don’t we. Having a functional halogen oven again (whether or not this one may carry its own fault) has reminded me of just how much pleasant heat they output in to the kitchen area. I used to dream of having an open fire… 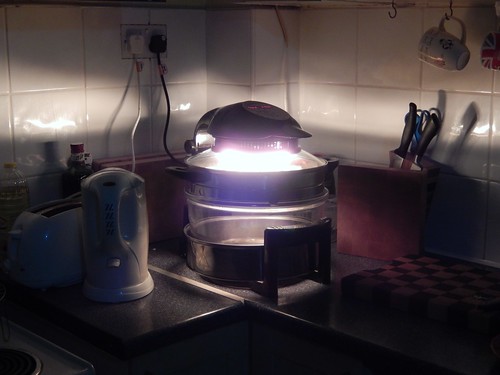 Come to think of it; I see oil-filled radiators in Lidl and perhaps the odd fan heater but one day, maybe, they’ll start stocking halogen heaters as well?