This was my first baking effort of 2015 and, in case that’s not enough of a feat on its own; it also happens to have become the best cake that I have so far produced in almost one year of Halogen Oven trial-and-error!

You’ll have to go to BBC Good Food if you’d like to see the recipe.

My inspiration for this came from meeting someone a few weeks ago who had a great admiration for carrot cake. Compared to some of the chocolate and banana-filled items I concocted in 2014, this one, by name alone, carries less of an appeal for me personally. But, when a website refers to it as both “scrummy“, “yummy” and they go and add a load of raisins in to the mix… Well, I had to give it a go.

While I began grating both the carrots and the rind from the skin of an orange, I’d already set my oven to pre-heating temperature. I’ve even adpoted a simple oven thermometer to ensure I’m getting this bit right. 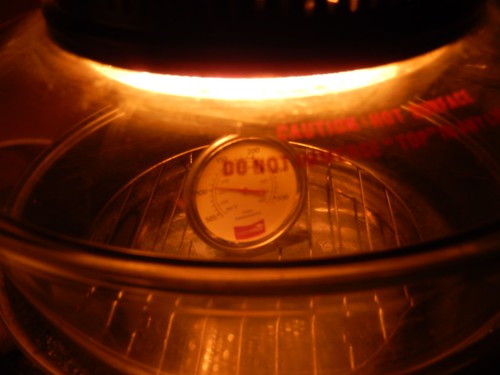 If you read the recipe carefully at the top, you’ll see they quote different oven temperatures depending the oven you’re using (as most sources will). There’s no advice given for a ‘halogen oven’ owner but they do include a fan oven temperature (at 160°C), which is about as close as you’re going to get.

Taking the advice from Sarah Flower’s books to keep the temperature low (otherwise, the direct on top of the cake will brown the top ahead of everything else), I decided to play it safe and started off at 140°C, until ten-minutes from the end when I decided it would be best to disturb the cake and check. 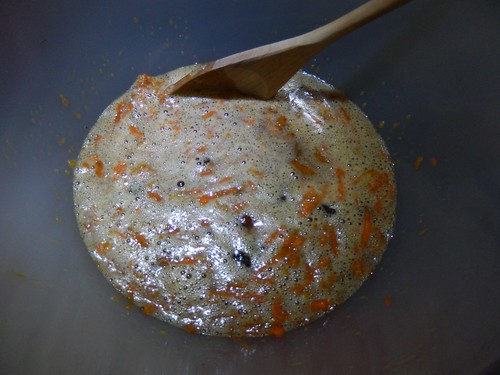 It was underwhelming soft. Wet, might even have been the more appropriate word, even though the top had browned a little. 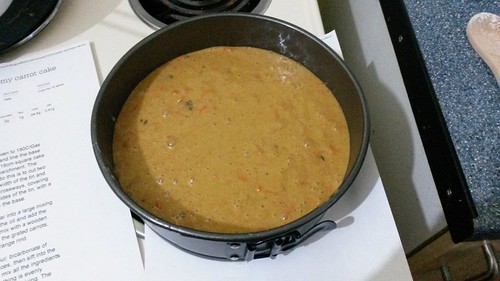 It had evolved some way from the ‘soup’ that went in to the oven but still, it wasn’t ready for dividing with a sharp knife.

So, I gave it an extra ten-minutes (after the initial forty-five)… But still, I wasn’t satisfied. At that point, I decided to increase the temperature to 160°C and, another ten-minutes later, there was improvement to be seen. 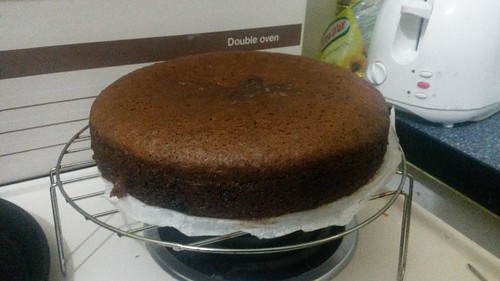 A skewer test revealed it to be very slightly bottom on the underside and so I gave this cake a five-minute ultimatum without altering the temperature. Once it had later cooled in the tin, it eventually turned out [no pun intended] well. Better than most that I have attempted and it wasn’t burnt.

There’s another trick to my method of success here and for that, we’ll have to dip back in to the halogen oven itself:

For obvious reasons, you don’t want to use the high rack, or else you’re toast the top in no time. But I’ve tried using only the low rack in the past and, being less than 1in from the base of the oven, there simply isn’t enough room for air too circulate beneath and around the tin. So, I took the lid from the steamer pot (an item that remains unused) and placed that on top of the low rack. My cake tin sat on top of this and, although you do have to balance it, the method clearly helped, after implementing it towards the end of the oven’s initial cycle.

These red tins are supplied as standard with most halogen ovens but I never seen anyone use them. My manual states it’s suitable for steaming rice(!) and fish, while I’ve also seen it referred to as a ‘cake tin’, in spit of the fact there’s a large hole in the centre that continues down through the bowl!

…A doughnut cake (perhaps), anyone? 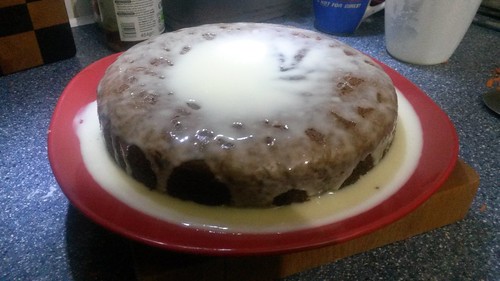 Back when I was securing the grated rind from that orange, I began eating its juicy inner segments… Before a quick glance at the recipe sheet reminded me of the importance of orange juice for the icing mixture! In the end, I needed a bit more than the stated dosage to get a reasonable consistency  but, ignoring the fact I made a complete mess of the top (which is supposed to be a criss-cross pattern), this turned out to become my most delicious cake yet and also, the first one (not over-done) that I’ve been able to use without reaching for a bowl and spoon!

The only strange thing about this experience was that the recipe contain not even an ounce of butter (although, that’s not to imply that it’s in any way more healthy than most). That, along with the fact you barely taste the carrot in the finished product.

Thanks for reading and, if you’re interested in baking with a halogen oven, do not let the naysayers put you off! 😉