Walking on Easter Sunday is becoming somewhat of a tradition for me. It began in 2013, when a friend invited me out on a walk across the Mendips (a date that also coincided with my birthday for that year). Last year, I remember climbing Brent Knoll Hill to discover the large crucifixes that had been erected upon the summit. 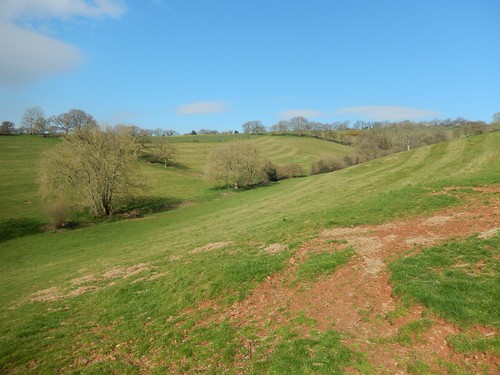 Those crosses were again visible on the same day in 2015. Only, this time, I was heading a little further down the M5 and to my latest walking ‘home’ – the Quantocks! 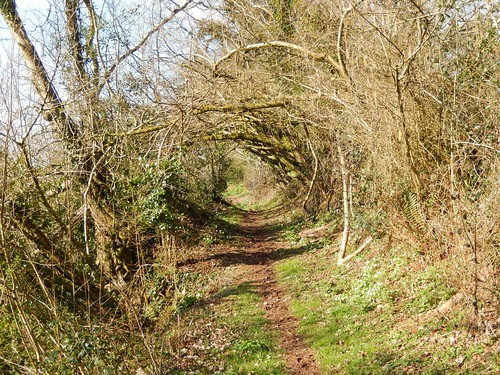 This route was quite familiar to a couple that I have previously done around the southern edge of the Quantock Hills. As always; it began at Fyne Court in Broomfield, with their spacious free car park. I was fairly confident of the way but decided to test my new SatNav (for its second outing) on the way down – it was quite fortunate that I did, as I almost left the motorway a junction early (as I would do for a walk around the northern hills). 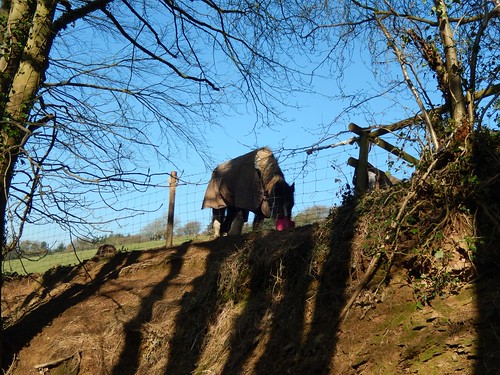 My first target was always going to be Cothelstone Hill. Only, this time, I decided to brave a route I first attempted in May of last year, only to realise it was obstructed with many large fallen trees… This time, however, it was clear enough for a pair of horse riders to march on through. 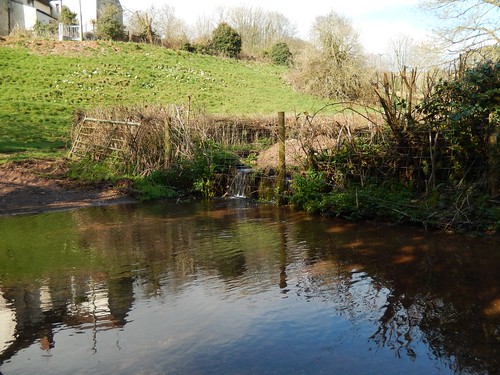 Instead of merely retreading ground that I had walked on two occasions last year, I chose to take a third path, straight up the hill and following Ball Lane, which would lead me almost immediately to the summit of the hill, without having to first meander down through Cothelstone village. 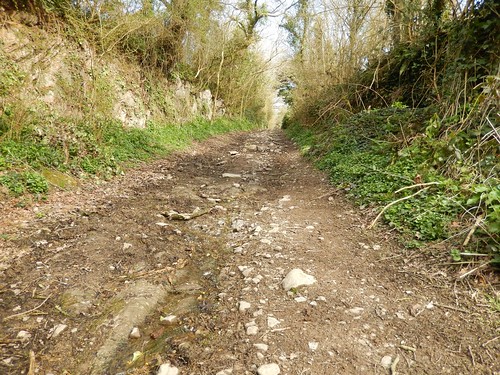 About halfway up the lane, I noticed the two horse riders I’d already met twice previously this very morning, had came to a halt as a fallen tree lay clear across the path. This tree had an average trunk diameter of about 5in/125mm and despite the man’s best bouncing efforts, it wasn’t going to snap. I jumped in [no pun intended] to offer assistance but, even with more than 25st bearing down, it wasn’t going to break. We removed a few branches that were offering resistance and proceeded to bend the tree back towards the edge of the lane… He pulled, I pushed and, after a good few minutes we had it folded back far enough to ensure free passage of even a motor vehicle! 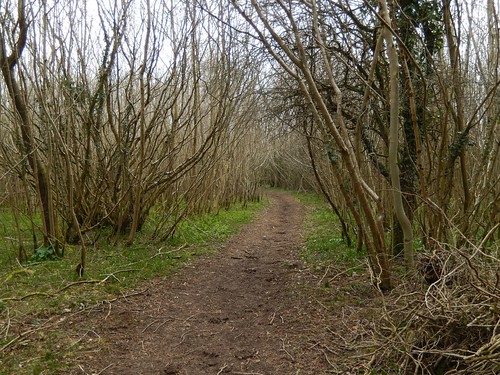 Coming to the end of the lane, I realised I was re-joining the MacMillan Way; a path I attempted to follow from further back on my previous walk here, but for an overgrowth of crops. So, before moving on to the very top and a five-minute snack stop, I took a few steps off course to investigate the present state of said footpath. 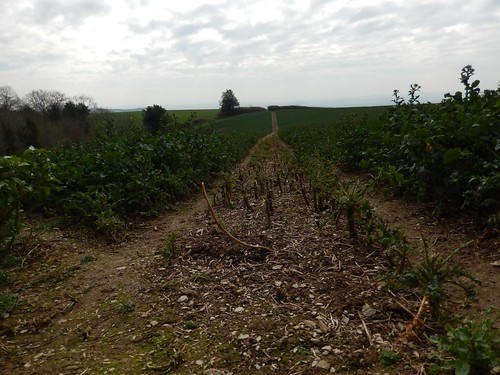 As you can see above; the path was clear as day to follow. Perhaps this is a more recent intervention since my last visit. Or, maybe, I was attempting to turn left far too soon… Either way, it’s good to see that this landowner had made a considerable effort, as I’ve walked through too many fields where the same care and attention to a public right of way has not been applied. 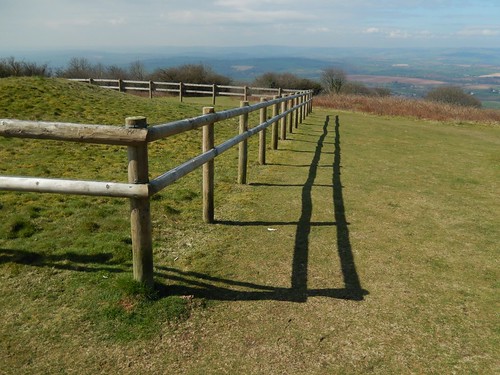 It was long before I passed the horse riders again, where the woman informed me of run she’d taken part in previously, known as Man Vs. Horse – apparently, a fifty-mile long race across the Welsh Mountains; more often than not, won by a horse. But, every once in a while; man claims first place over the finishing line! 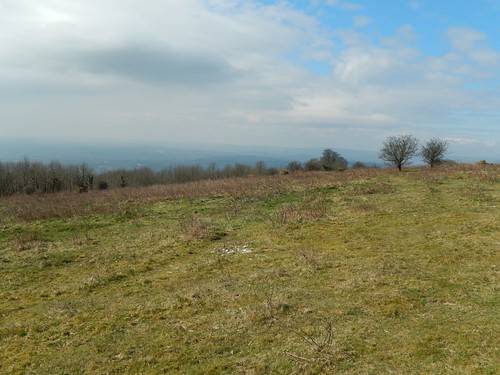 On my only previous visit to Cothelstone Hill (which I think was in September), it was a grey and overcast day. Even still, it was a welcome place to be. 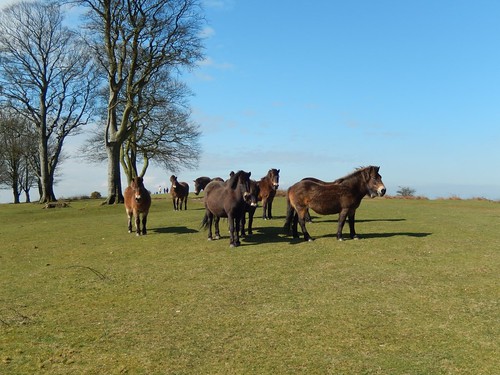 As usual, the resident Exmoor ponies were available to pose for very many photos. 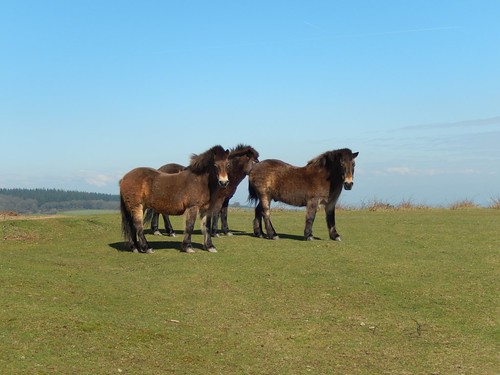 What surprised me though, was the increasing abundance of two-footed visitors to this hill and on this day. I guess it was due to the occasion but it’s nice to see families making an effort to get outdoors (even if some are more dressed for the conditions than others). 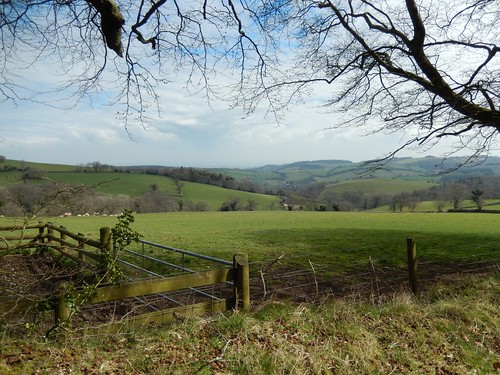 Continuing on – I followed the road (and a group of teenage mountain-bikers) up and just north of West Quantoxhead, on my way towards Lydeard Hill. 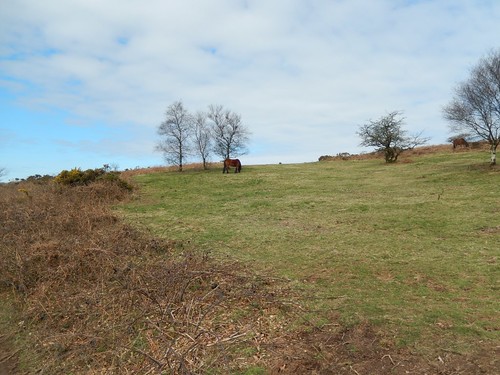 Where I’ve climbed great heights to reach Wills Neck in the past, I decided that, on this day, I’d keep it reasonably level in my pursuit of the highest point upon the Quantocks. 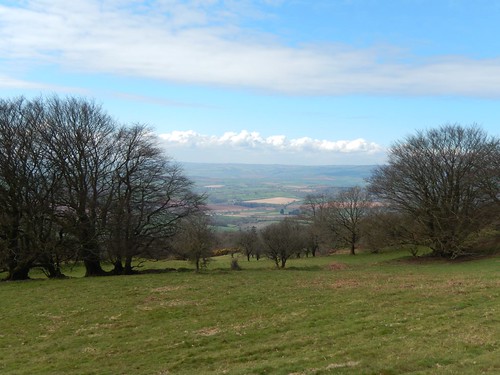 Closing in on the lunch hour, Lydeard Hill was busier than I’d previously seen (even if my photos don’t display that). The car park was close to full with several families settling down for a picnic. 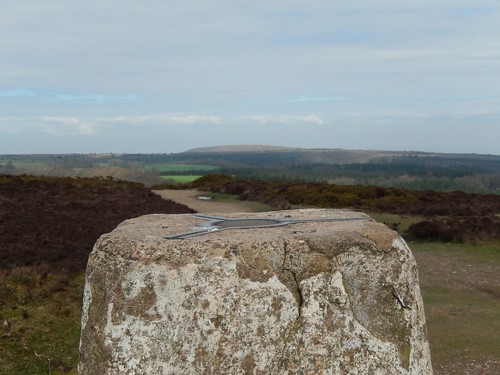 Departing from the trig point at Wills Neck, where I didn’t feel comfortable stopping for lunch (so soon after my previous snack), I took an unknown route north, towards the edge of Great Wood, which I would then follow east to arrive in the village of Aisholt. 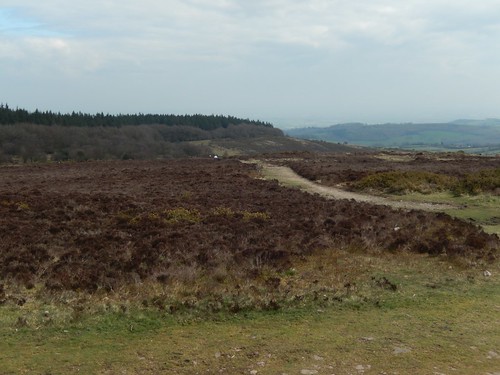 I didn’t see another face here until passing a departing car as the track transformed in to a surfaced road. 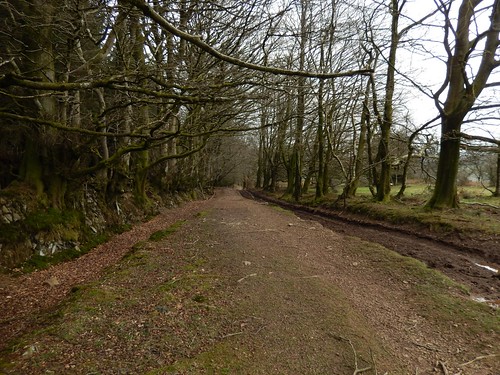 Down to my right, I could look over Aisholt Common, which was only to be admired on this occasion. There is a footpath that departs down and on towards the village church but I didn’t spot it before reaching the road. 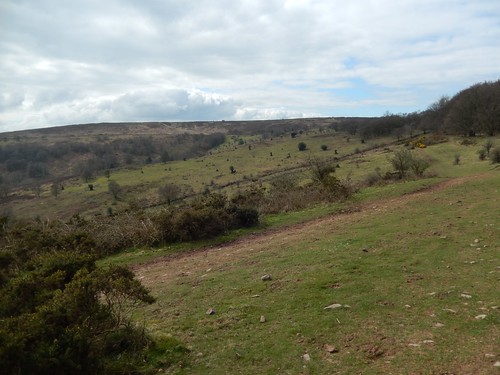 This was the part of the walk that I wasn’t looking forward to as I knew, from two previous past experiences, that I was likely to come up against overgrowth and obstructed right of ways… 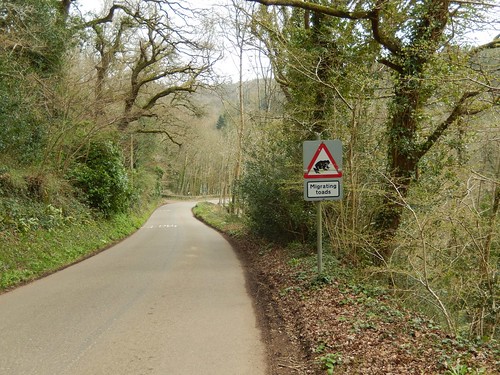 Knowing many of the areas I may have to avoid, I stuck to the roads for a while, passing down and to the right of Hawkridge Reservoir in the hope of finding a picnic bench amongst the sea of cars… (Nope and I didn’t spot any migrating toads, either!) 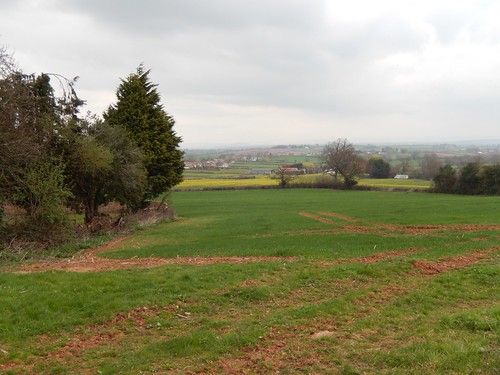 I think I was then heading towards Spaxton with Enmore to follow after that. My stomach grumbling ever more, as my legs insisted that we must wait until we embark upon the perfect seating arrangement. 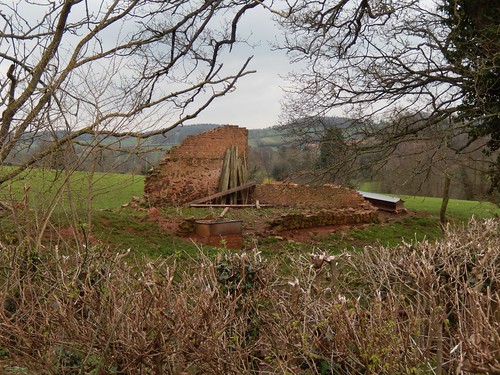 I exercised the thought of passing Enmore Castle and seeing the lake I missed almost a year ago. Sticking to the roads made for a long old walk around the boundaries of several fields before I reached the church beside the main footpath. I was put off by the surprising number of visitors mingling and so, turned back to my roads and towards the next village of Goathurst.

I remember following a long road with several ‘previously inaccessible‘ footpaths branching off on one side. But I now regret not investigating their current state, even though it would have lead me off course. I won’t be satisfied until I’ve revisited the area on another walk to decide once and for all. 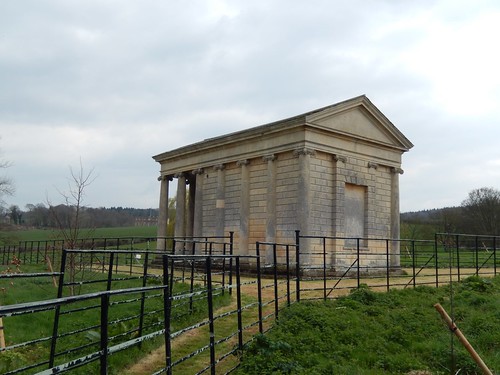 My reason for visiting Goathurst was to visit the Temple of Harmony. It’s a point jumped out to me from the OS map sometime last summer. It’s always seemed so far from the routes I’ve walked and yet, it turns out it’s only a minor diversion away from the Quantock Greenway South. 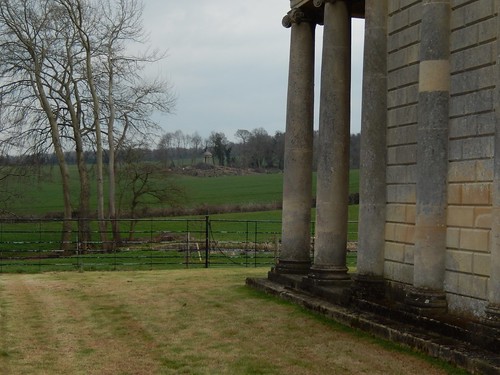 Upon reaching the steps leading up from the road, a sign informs you that the building is open on Sundays and Bank Holiday Mondays (I think the timing was 14.00 – 17.00). They also appeared to offer tea and cake during this times! 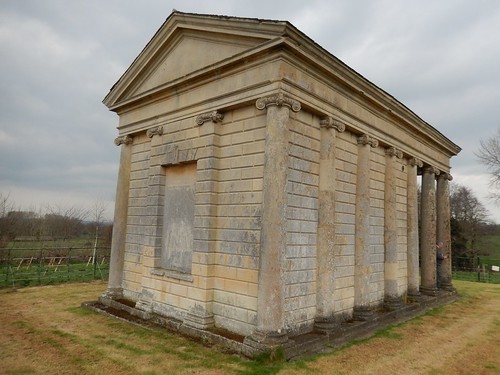 I could hear voices from the front and so, decided to sneak around the quiet side, taking as many photos as I dared, before braving the unexpected congregation of others. 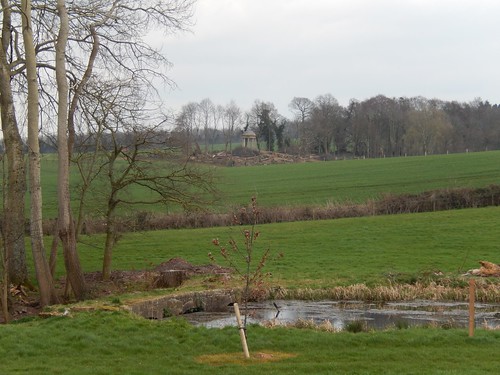 As soon as I stepped in to vision, I was greeted by one of the women who organises the opening of the temple (which, as I’ve since learned through Wikipedia, is an homage to an ancient Roman temple).

It wasn’t long before I was informed that there’s a fee to pay for visiting the temple! Despite the woman’s claims (and I checked this again, on the way back down), there is no mention of this on the sign at the roadside. She didn’t tell me how much but she did, however, inform me that a cup of tea was only £2…

I felt quite uncomfortable at this point (not to mention still HUNGRY, at some-time-past-15.00) and as I genuinely squatted down inside my bag to see how much cash I had (literally, about £2), I spied a couple of other people making their way up to the temple… I fumbled around in my bag for a bit longer and, having lost the unexpected attention, I snuck away! 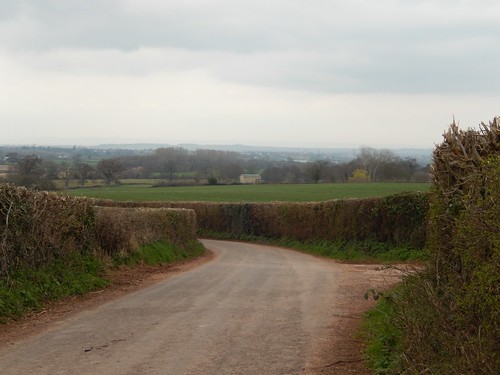 Soon, I was heading hard up my final hill (albeit, another road), with the temple fading far behind me.

I don’t think I did anything wrong, though – from Instagram alone, I’ve seen that people have visited the same site during its “closed” hours. The only difference, as far as I can see, is that you miss out on a cup of tea (not forgetting the cake) and a chance to read the information boards just inside the double doors. 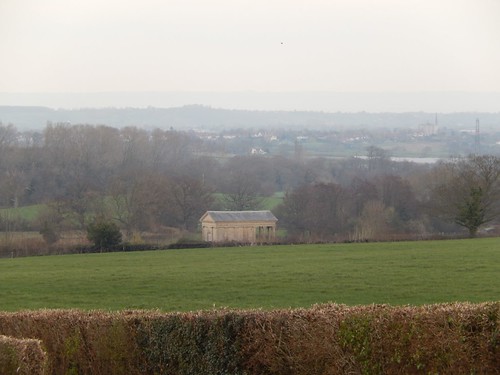 Maybe one day, I’ll return. You can’t fault a charity for trying, I guess and the temple did appear to be in good order. I later learned (again, through the internet) that this falls upon the grounds of Halswell House (an alternative footpath also passes the house but I was wanting this walk to be over and done. 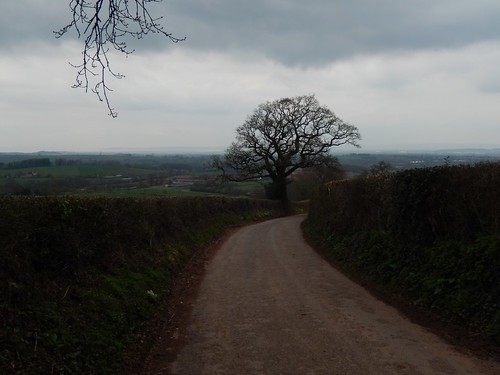 I don’t think I was even halfway up the hill before I was limping on my left leg.

Is the Temple of Harmony lined with some form of curse that strikes anyone who disrespects the well wishers?

…No, it was probably just me walking for four-hours without any suggestion of a lunch break! 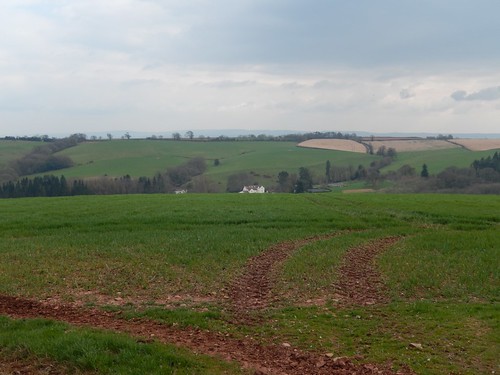 At the top of this hill, I found a stile with a generously large tread. Not only would this provide me with my next direction but I finally stopped, sat down and stretched in the knowledge I was now only a stone’s thrown from my car sat in Broomfield.

Upon re-entering the grounds at around 17.00, I could see Fyne Court was still alive with family activity, even after the café staff had gone home. I felt somewhat awkward relying quite heavily upon the stick in my left hand but I’d made it, at what must have been around twenty miles after the start! 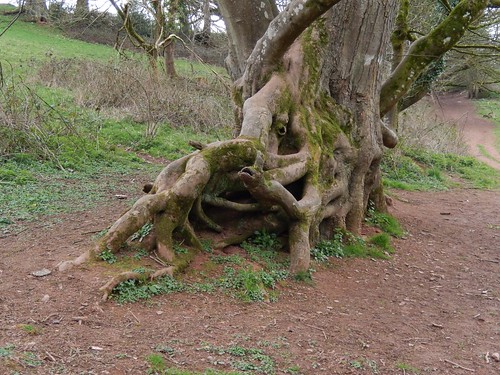 Thanks for reading! A post on my Easter Monday walk will follow soon (yes, in spite of the pain I suffered, I was at it again the very next day).