There are several food and baking-related posts that I have ready to feed you with right now, that it’s hard to know exactly where to start… 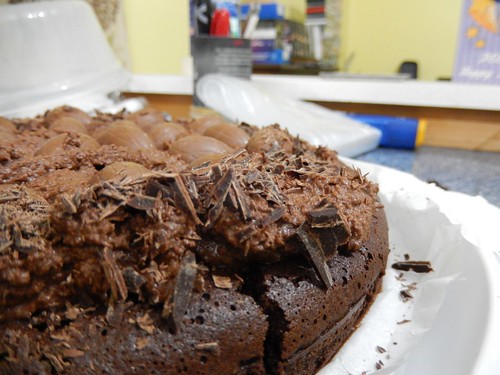 My instinct tells me to begin chronologically and work my way forward from there – my gut however, tells me that you can never go wrong with cake, especially when it’s chocolate!!

Only days after my 30th birthday (and I’ll show you the cake for that in a separate post), I was in the kitchen, ready to cook up a real treat in the spirit of the ‘festive’ occasion. Browsing around the internet revealed a lot of ideas that seemed to include many fruit ingredients and some names and words I’d not even heard of…

Feeling somewhat out of my depth, I didn’t give a second thought to the possibility of baking something brown and undoubtedly delicious, as I came across this recipe from Nigella Lawson.

With a list that includes almost 400g of chocolate, it’s clear that the woman loves cocoa! I was staggered by the inclusion of no fewer than SIX eggs (large ones, as well). But with a total absence of flour in this recipe, it was going to be an interesting experiment for me personally and also, a cake that’s entirely gluten-free! I didn’t have everything on hand (due to an apparent “egg pandemic” during my trip to Lidl, earlier in the day) and so I chose to buy something other than fuel or an electricity meter top-up from my nearest Budgens store… It wasn’t the cheapest experience but they had what I needed so urgently and it saved me a trip to one of the super stores!

In truth, I could probably have bought these same few ingredients from a village shop that almost backs on to my home. But my problem there is that there’s no free-to-withdraw cash point (ATM) in this village and I would’ve have to had driven to Budgens (or T-…) to withdraw my money anyway. 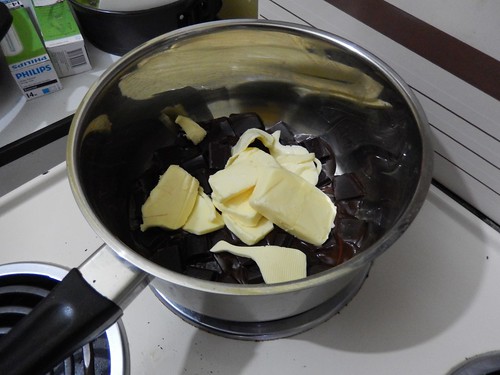 A lot of the chocolate and all of the butter went in to a saucepan to be melted gently. Previously, I’ve always melted chocolate over a pan of boiling water but that thought didn’t enlighten my mind until about two-thirds of the way through the process. 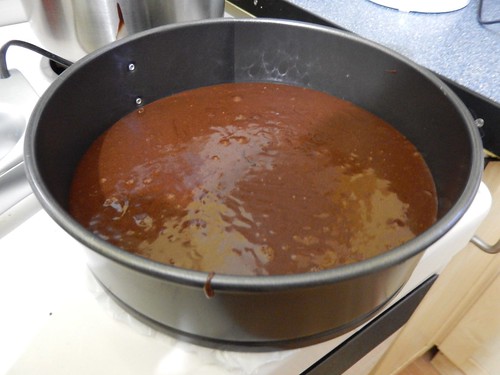 That leaves you with a bowl of murky gloop, which needs to cool before adding the separated eggs and the reasonably low quantity of sugar. A lot of whisking was involved throughout the preparation and it was nice to be able to do it by hand, without having to reach for and plug in my ‘power tool’, which often makes bit more of a mess, some noise and requires more of an effort to clean and store away. 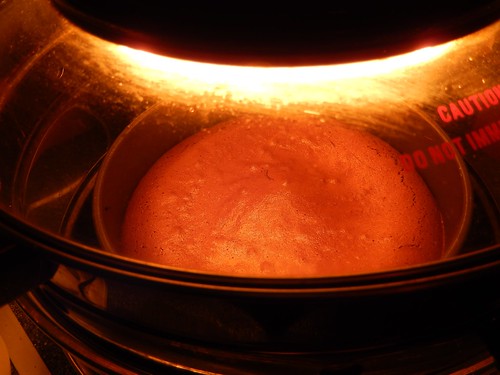 It went in the halogen oven, with a 230mm tin, up on the high rack, with the extender ring fitted to keep the heat source away from burning the top. I used a temperature of 160°C, which is less than what’s stated for a standard oven. 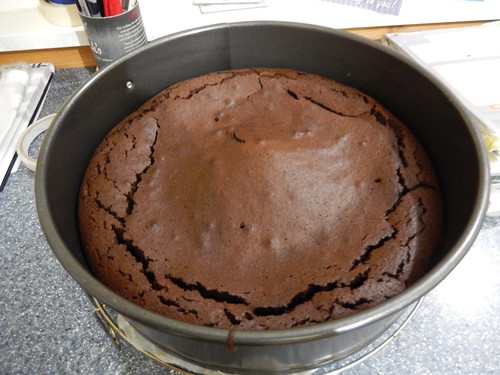 I wasn’t expecting it to rise much at all given the absence of flour. Is that what the vanilla extract is for? Anyway, it came out of the oven looking cracked, slightly crisp (as I baked it a bit too long, to be certain) pleasantly crumbly around the edges. 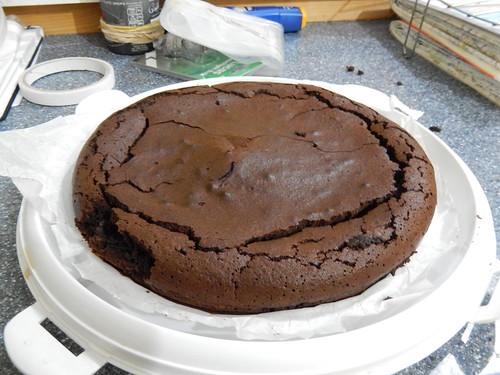 If you read through the recipe, you’ll see it’s supposed to sag in the centre and appears very much like a chunky chocolate pizza (well, they already do Chunky KitKats – if Nigella happens to read this, I’ve probably given her another incredible idea!) 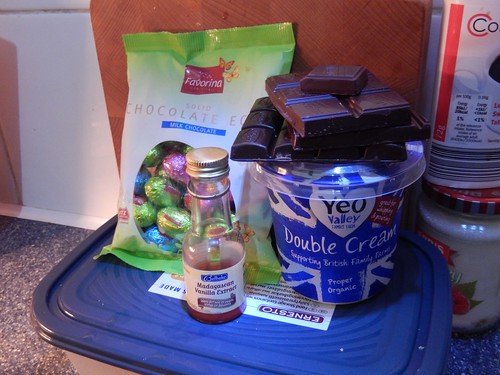 Then, it was time to put the icing on the cake [literally!], with even more dark chocolate, some double cream and, earlier in Lidl, I picked out a bag of chocolate eggs, as opposed to the more traditional Mini Eggs… These weren’t just chocolate-coated; they were solid all the way through! 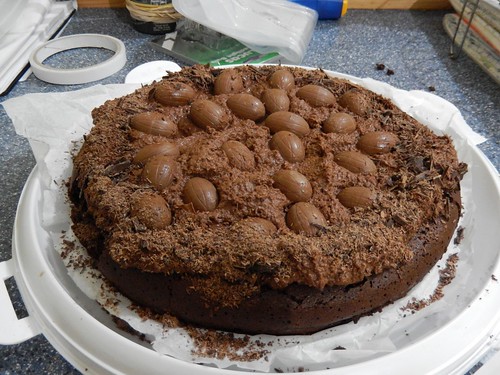 To give it the added “bird’s nest appeal“, I very thinly sliced some extra chunks of chocolate and then sprinkled them around the perimeter while the icing remained soft.

Well, it was a success on several accounts! I only shared it with two other people (and they each received only a single slice each) but, unlike everything else I’ve baked over the last year, I was only able to manage one slice for each day! It was that good. It was too good!

Now, I think I need to lay off the baking for a little bit while my body ‘readjusts’ to its former shape and size!