Last night, I felt inclined to give you a brief respite from a minor flood of baking goodness. But this post is important to me because it coincides with the first walk I’ve lead this year and as that was already five-days ago, I’d like to get this one out before the week has passed. 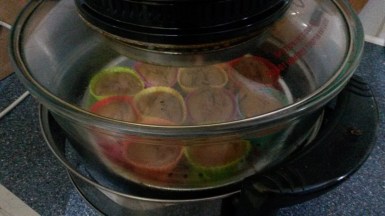 This post marks my first ever attempt at baking my own muffins.

Given the time of year, I found a recipe for ‘Easter Muffins’ inside one of Sarah Flower’s books for the halogen oven. I ended up having to buy a set of twelve silicone cupcake moulds on eBay (only about £3 including postage) as I couldn’t find anything similar locally and neither could I find an appropriate tray to fit my halogen oven.

As a recipe, it offered a lot of appeal for its simplicity and for the fact it uses fairly common ingredients (plus a couple of spices).

I was very surprised by how custard-like the mix was once it was ‘ready’ to go in to the pre-heated oven. You can see, above, how well these twelve cases just about fitted on to a baking tray! Ideally, I’d have a deeper spoon (I’m sure there’s a name for them) to be better able to pour the mix in to each silicone mould… I had to top them up so that each was about even with the next but I was also expecting them to rise later.

So, they fit on the tray quite well but then, getting that loaded tray in to the oven, I realised, was going to be an impossibility – instead, I carefully removed each case from the tray, dropped the tray alone on to the low rack and then, one by one, with extreme care to reduce spillages, reloaded it (naturally, they didn’t fit quite as neatly on the second attempt).

For my first batch of twelve, I used the perforated baking tray, which you can just make out in the two photos above. For my next dozen the following morning, I tried the standard baking tray and, in case you’re interested, the results were the same.

Once they’d been allowed to cool, you can carefully peel away the silicone moulds and pop the muffin or cupcake out from the bottom. I found the moulds a little awkward to clean thoroughly by hand but the baked goods went down a treat – I received strong approval from a friend who sampled the first batch with me and on the day itself, I had just enough for the nineteen walkers who turned up for my walk (I did mistakenly tell people it contained ginger when what I meant was nutmeg but I didn’t hear one complaint).

Sadly, I didn’t really take any group photos from the day (an extreme rarity, for me) and so, I don’t really have anything more to share. But I look forward to baking more sweet treats in the future as they’re great for sharing and rewarding others and they don’t take very long to create.