With the summer fast approaching, I frequently think back to last July, when I walked along a stretch of the Jurassic Coast further south in Dorset. I have plans to do a little more coastal walking this year (along with further camping expeditions) and as somewhat of a ‘warm-up’, I met up with a friend in Clevedon (a local town for me) and we set off on a linear route towards Portishead. 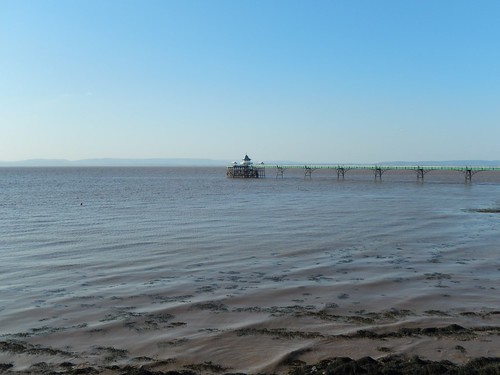 We started right beside St. Andrew’s Church, very close to the south-west corner of the seaside town. From here, we could walk a portion of the Poet’s Walk (with views that apparently inspired the likes of Samuel Taylor Coleridge) and caught up with the coastline from then on. 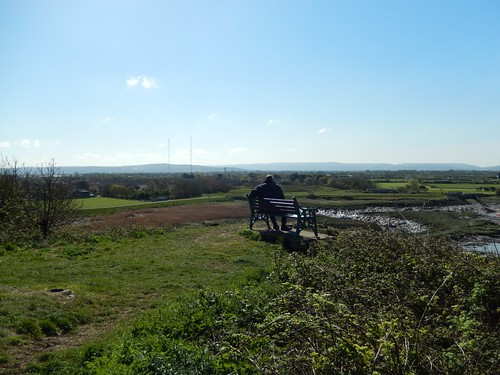 If we were to have ventured south from here, we’d have soon reached Kingston Seymour with its sea wall. Beyond that, lurks an absence of coastal walking until you reach Sand Point – research has lead me to understand that intentions to create a coastal footpath along this stretch are real; it’s only a stubborn and resilient landowner standing in the way.

We parked without having to pay and you could certainly do the same, although the road is mostly residential, even with its expansive church buildings and graveyards. 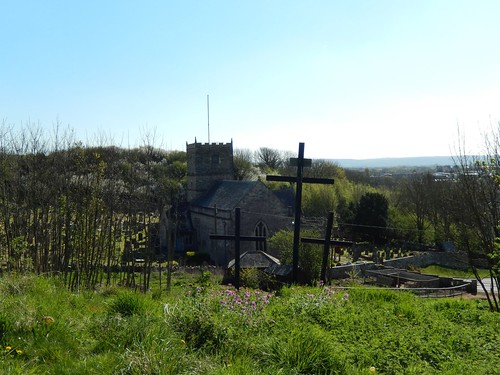 We were only a stone’s throw from the pay-and-display car park for the Salthouse Fields, which many would likely have used on such a glorious day of clear blue sky. 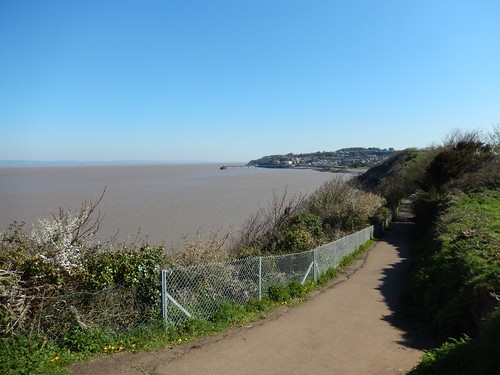 As I child, I used to come to this part of Clevedon quite frequently with my grandma. I’m assuming we’d never previously visited the structure below, known as The Lookout, because I simply couldn’t remember it from anytime before. 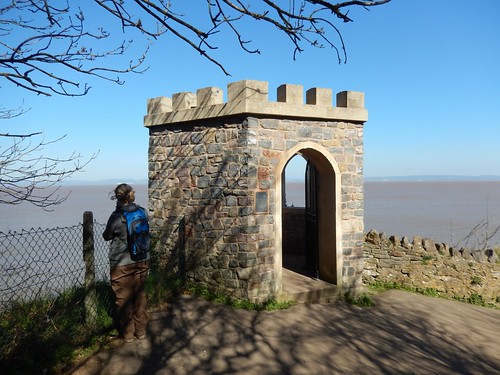 Admiring its current state after restoration a few years ago, it appeared so pristine, I found it hard to imagine it could have been as crisp and clean when it was first built. 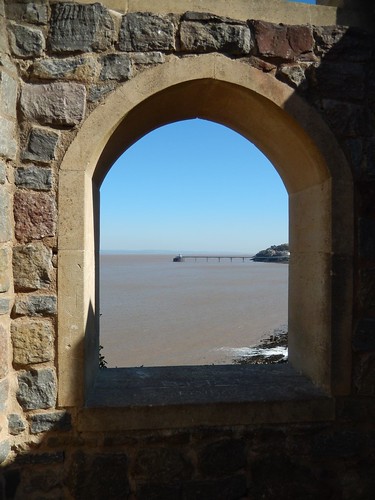 From here, you can get a good view (northwards) of Clevedon’s Victorian Pier. 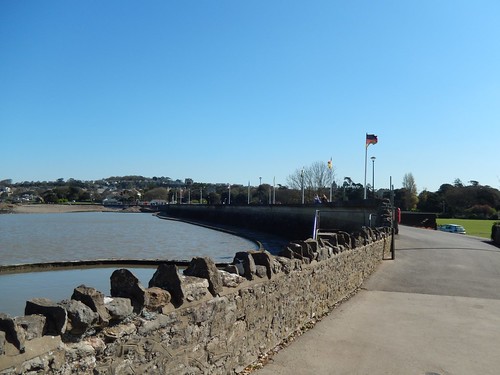 Before we got there, we passed the Salthouse Fields, with the Marine Lake before it (I read recently in a local paper that they’re supposed to be ‘developing‘ the Marine Lake soon but I forget the details). I could remember the water being much shallower in the early 90s (we were walking at a time of low tide) and also times spent on the nearby bouncy castle and the joys of the miniature railway which, as I was pleased to see, is still in operation today (by the time we ended this walk, they were packing it away and so, I wasn’t able to lure my friend in a nostalgic ride).

Seeing the photo above has reminded me that I need to find out what the flags are for – an article I’ve just found informs that they were due to be replaced in time for Easter last year (they were very tatty when we passed last Saturday), with the intention then to renew them every two-years… Perhaps I should pass by again in April 2016?! 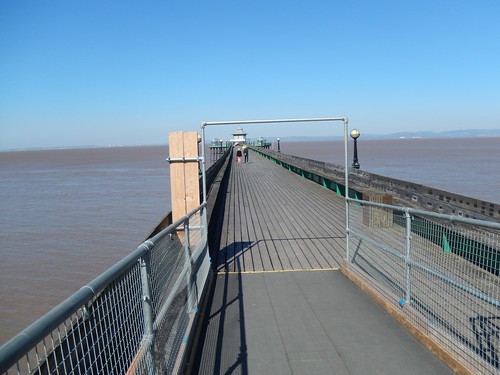 As we arrived at the toll booth for the pier (which was partially obscuring the road), it was impossible to ignore the fact that restoration work and repairs were currently underway. But it was with some relief that the biggest sign of all proclaimed the pier to remain open to visitors. It was only £1.80 for each of us (I had anticipated almost twice that). 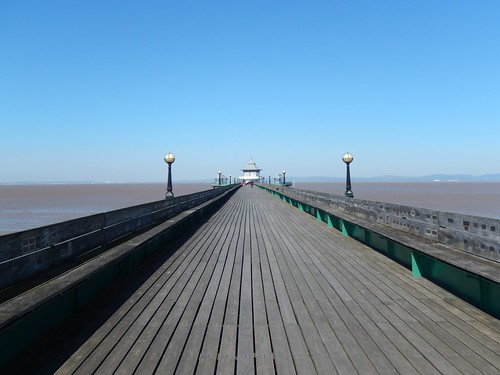 If you were to turn around at the scene above, you’d see an abyss behind steel fencing where boards and planks had been removed as the initial stretch of the pier is being attended to by construction workers. Making our way towards the far end, we spotted a never-ending array of brass name plagues, along every board below and beside us. 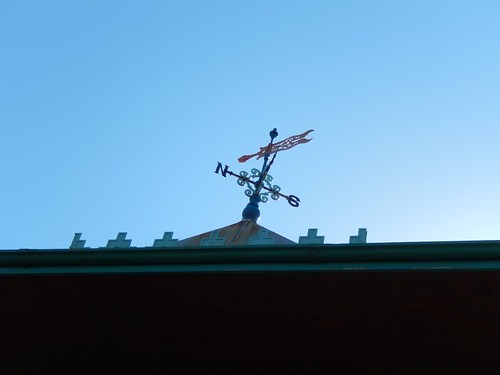 This was almost certainly the first time I’d visited the pier. Something tells me it might’ve been closed when I came here as a kid (either that or, we weren’t prepared to pay the admission fee!). 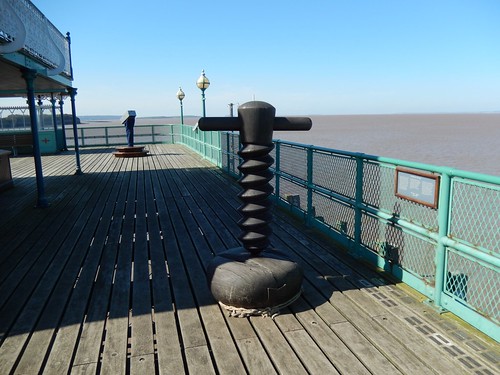 I was quite excited to find this wooden sculpture on display, in a form that inspired by both an anchor and a large screw. I forget the artist’s name but it was carved from greenheart (one of the most water-resistant species) and, perhaps most significantly of all, the ‘blank’ was formerly a part of the old pier (I think they call the uprights stanchions?). 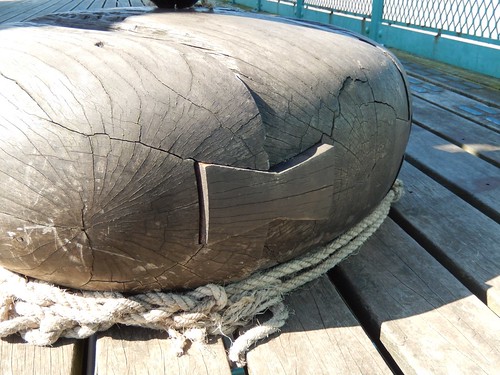 Adding a little bit of woodwork to my walking! How could I not now show you this dovetailed key to prevent the aged and weathered wood from splitting apart as it shrinks. 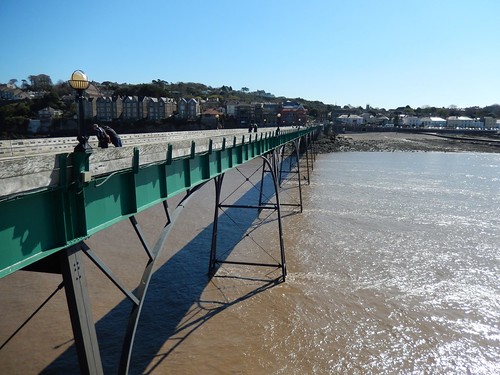 Moving on, after a good while to take in the scenery and we had our first glimpse of the Second Severn Bridge (not that we’d be walking that far). 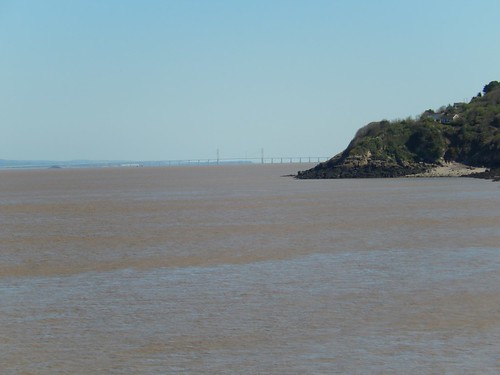 Staring across the Channel on such a clear day, we had a good view over to South Wales, with the bay of Cardiff, Brecon Beacons and even Sugar Loaf mountain each discernible amongst the landscape.7 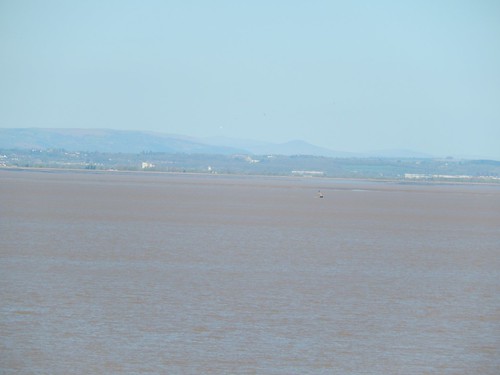 We stopped off to explore Ladye Bay brielfy before marching on and out of Clevedon, linking up briefly with a popular local route known as the Gordano Round. 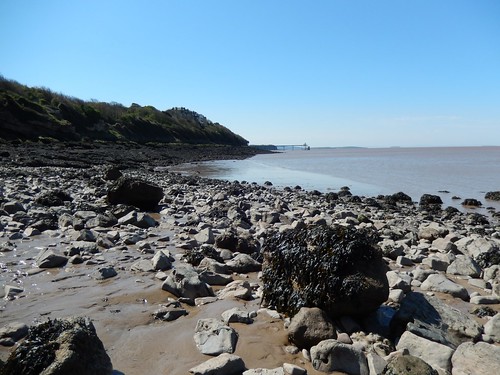 We must’ve been skirting the edge of Clapton-in-Gordano (not a million miles from the Portishead border) when we stopped for lunch shortly before 13.00. 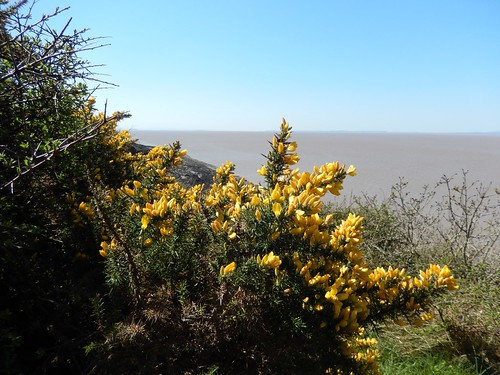 We hadn’t really walked that far but had spent a lot of time exploring, which is something I wouldn’t have done on my own. But variety is always welcome, with less of an urgency to walk too fast. 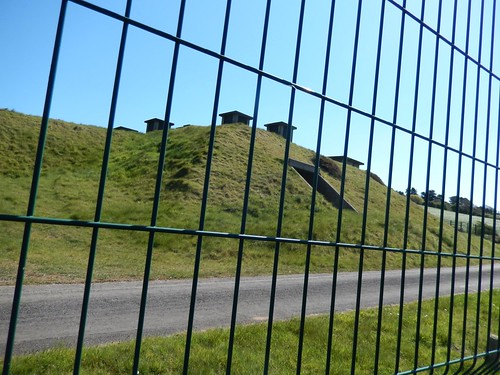 After lunch, we found benches a more common occurrence as we moved ever closer to the next coastal town. With that, we also passed the secured grounds for what appeared to be a training or testing facility, apparently owned by a Defence company my current employers also happen to supply. 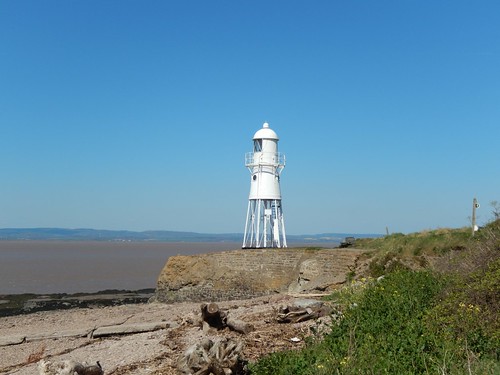 You know you’re close to Portishead when you come upon this, the first of two lighthouses. 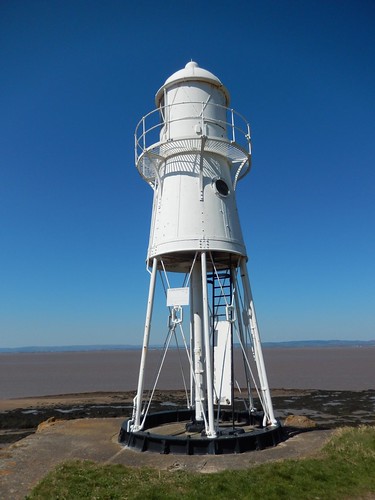 My friend questioned whether they are still in operation. My assumption is that, as with the other lighthouses further south in Burnham-on-Sea, they’re probably not. Yet, they remain a stalwart of the heritage and history of the local area. 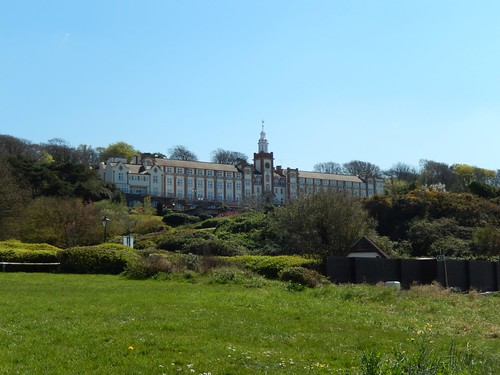 With our heads constantly turning to take in all that we could see, we both drew our attention to this grand old building of extraordinary length, divide in two by a clock tower. Research has since told me that, up until as recently as 1983, it was the National Nautical School. Today, it is known as Fedden Park, with the interior having been converted in to flats.

We seemed to pass a lot of dog walkers between the outskirts of Clevedon and Portishead and it was the same on the return leg, with fewer people passing by the closer we got to Clevedon. We passed the beautiful and well-maintained Marine Lake (where the council expect you to pay 20p to use their toilets) before reaching our turning point at Battery Point, which is only a few yards from the popular ‘open air’ (outdoor) pool. 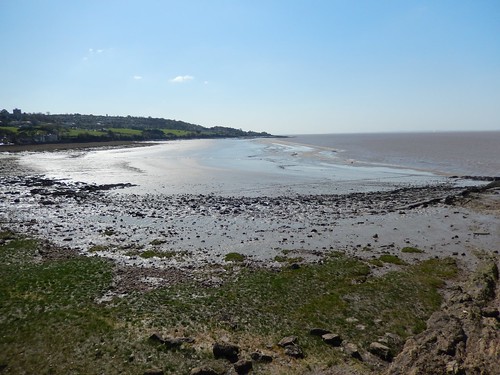 Portishead’s littlest lighthouse can be found here, along with a millennium stone. 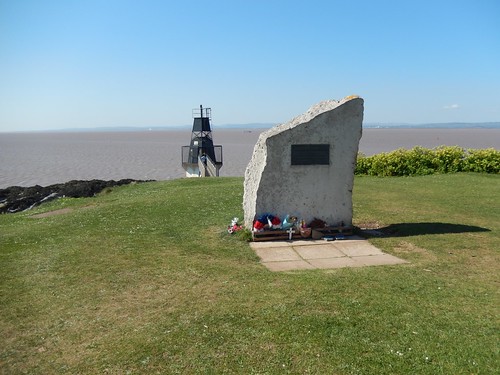 We did infact ‘walk the plank’ as far as the locked gate. Battery Point is known as the one area along this section of coast that lies closest to passing ships – standing directly beneath the lighthouse, you suddenly become very aware of this as intense winds burst past you! They were so strong, I was afraid to get my camera out in case I lost it. 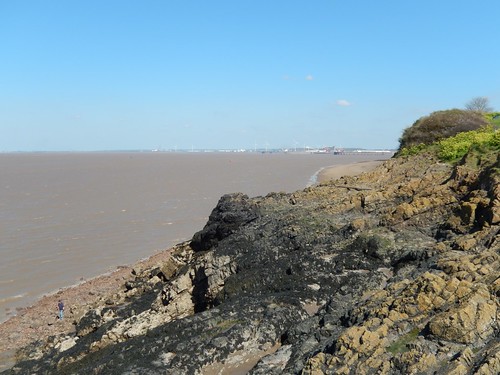 Avonmouth, somewhat of an industrial eyesore, lies further to the north. 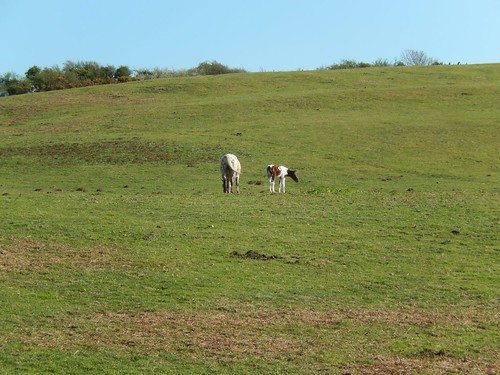 We spent a good amount of time enjoying the comfort of a wooden bench at Battery Point, while accompanied by the kind of sunshine we can all hope will continue throughout the coming summer. We’d walked this far and yet, we were going to have to do it all over again to get back to the car and then home!

Such a beautiful day… And yet, procrastination wasn’t going to make that return journey any easier! A thought had occurred to explore an untested route back across the fields inland but, for the sake of simplicity and time, we put our trust in the coastline.

Retreading our steps was much tougher than anticipated. Along the way, we noticed several sights that were unfamiliar while we were outward bound (not only those horses above but an entire HOUSE!). There were certainly more descents than uphill climbs walking this way; the distance (a good seven miles) just felt longer. 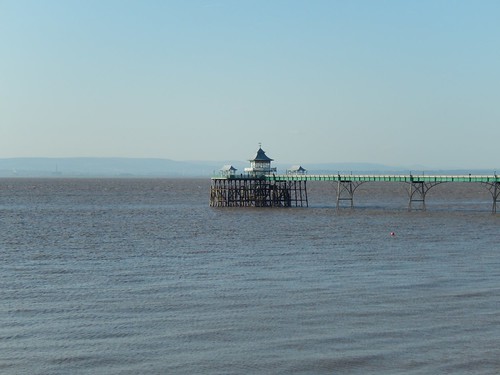 Perhaps most challenging of them all was the relentless glare of the sun; lying low and closer to the ocean with light emanating from every wave. Sunglasses may’ve helped but it felt like a welding mask would’ve been ideal, as we walked, unable to outmanoeuvre its presence. 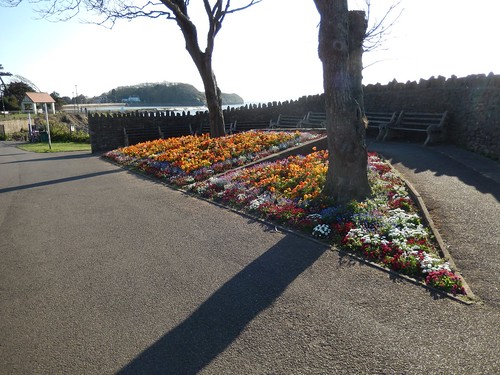 We completed our journey by reconnecting with the Poet’s Walk as far as the church graveyard… Which turned out to be one of at least three, before we eventually made our way back to the car. 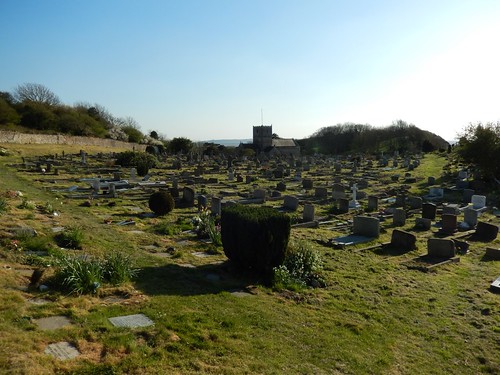 I was grateful to be able to walk a section of the coast so close to home, to explore a little bit of Portishead (plus the previously unseen bits of Clevedon) and to be able to share it with someone who shares a passion for hiking – all for one of the best days spring of 2015 has so far had to offer!

Thanks for reading and I’ll write about Sunday’s walk soon and hopefully tomorrow!