This takes us back to around the time of my birthday, which was already just over a month ago. I’ve had my share of Pukka Pies and I’ll occasionally try one when out for a pub meal. But with many cakes, a few casseroles and the odd shepherd’s pie already under my belt, I decided to have a go at a more traditional pie with a bit of pastry on top. 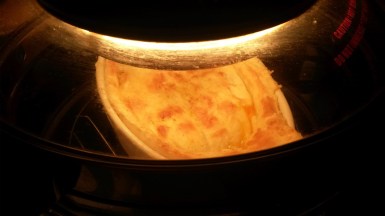 I happened to have all the ingredients (including the mince) available in my fridge. 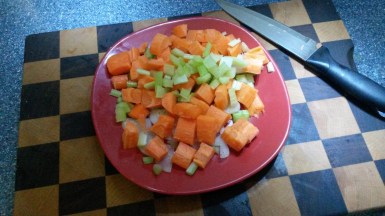 I was quite closely following one of the guides in BBC Good Food’s Meals for One title. They might’ve called for the inclusion of leeks, where I’ve used celery. 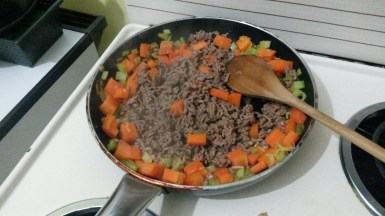 This is one of those recipes, as I remember it, where you’re supposed to use a sauté pan for the frying… I’m still not sure what that is but I think it might be a deeper frying pan with a lid on top… I’m reluctant to buy anything that I might use only once in a blue moon and so I made do on this occasion (although it wasn’t my first). 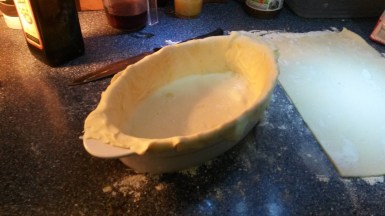 It called for the use of puff pastry and this is one item I did have to look out for on the shelves… But I didn’t know even where to begin looking in Lidl – in fact, it was only by chance that I spotted it amongst the small section of clearance items that are about to exceed their best before dates.

I’ve since learned that Lidl do keep it alongside all the butters and margerines but still left of the milk and chilled drinks. I would’ve expected to find it amongst the baking goods but then, that is only one the other side of the aisle, I suppose.

I did make the mistake of buying short crust pastry, which I believe is only any good for much smaller items. Also, I didn’t have enough to encase the entire pie and so, you can see above how I made a complete mess of the top by literally trying to patch it up with the leftover trimmings… Not that the recipe called for you to do anything more than the place the pastry directly on top of the innards, I might add!

I’ve been persevering with this awkward, oblong pie dish since I bought it from Tesco over a year ago. Not only is it’s shape strange but it doesn’t neatly fit inside my halogen oven – the ends balance on the upper rim of the glass bowl, with the main portion of the dish suspended against gravity! Therefore, it is imperative that I also fit the extender ring.

It took probably a good half hour in the oven and I’m pleased to say it came out cooked right through (if slightly too brown on top). I like the fact that you can eat it straight from the dish and it was worth the extra effort to avoid buying something that would’ve been almost ready-made.

If I can find myself a reasonably sized pie dish for a single person that also fits more comfortably inside my halogen oven (my main casserole dish is far too large) then I’d love to go at some more vegetable-based pies – and with proper puff pastry on top!