Twenty-four hours ago, from the point at which I begin to write this post; we were packing up our camping gear and heading back to the car after a wonderful Bank Holiday weekend in Wales. 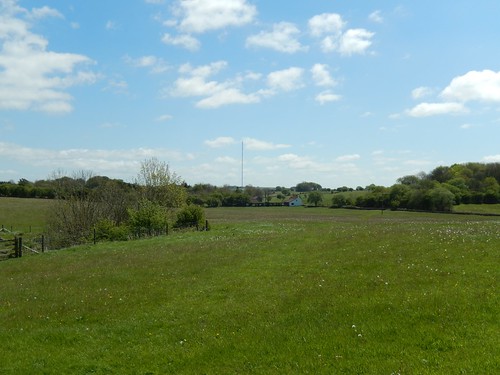 That’s all to come in posts to follow later this week. Right now, I feel a need to bring you up to speed on the first of two walks from the previous weekend. 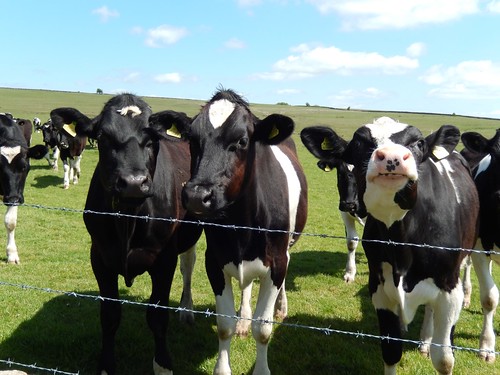 With lots of driving to come in the week ahead and preparation necessary for a long-distance walk to follow this coming weekend; I decided to make my Saturday walk a fairly local one. By heading to Priddy, I could revisit a landscape I’d not seen for a while and also practice a route to lead for the Ramblers group. 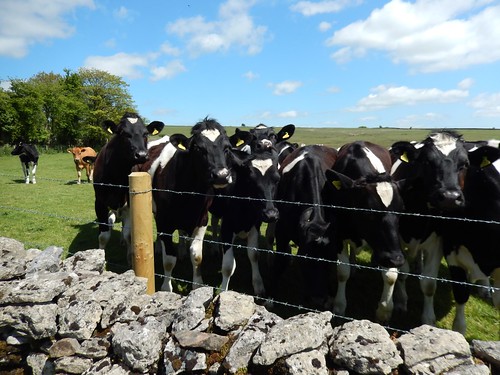 So, like several of my previous walks in this area; it began at the Stockhill Forest car park and from there I crossed Priddy Mineries in a south-westerly direction towards the road. 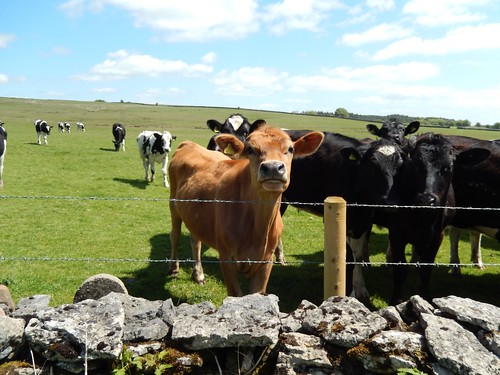 From there, I almost immediately turned right to head north-west across fields and then on to Nine Barrows Lane to continue north, passing the great herd of curious cows you can see in the preceding photos! 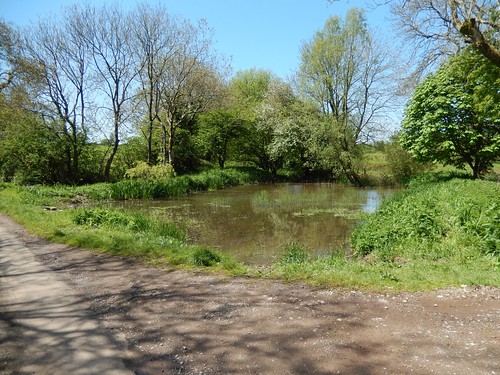 That was a new route for me and, to continue along a path that was mostly unfamiliar, I left the track to head west in the direction of Priddy Pool. 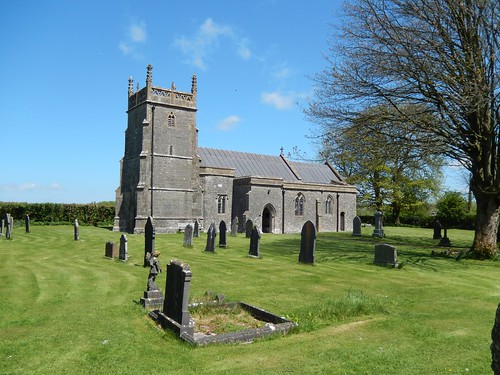 I decided here, that this minor detour from an otherwise direct route didn’t warrant a trek through soft mud and puddles and so, when the day arrives to lead this walk, I’ll instead take us down and through the churchyard, passing a school before arriving at Priddy Green; a popular meeting point for caving enthusiasts. 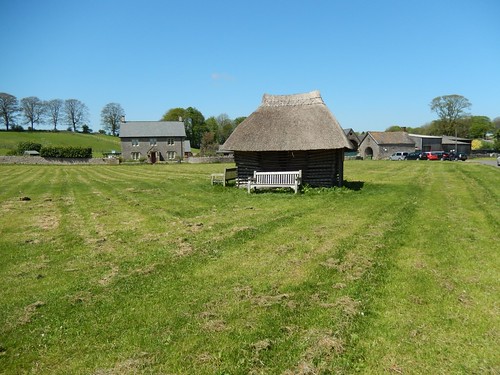 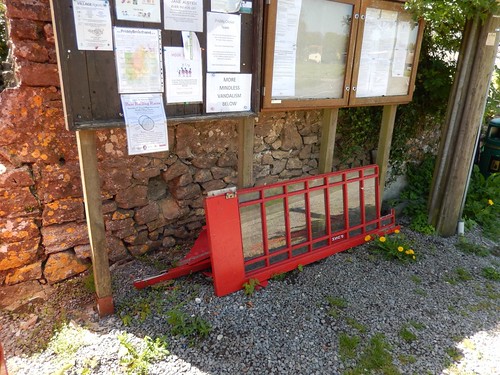 Heading down a familiar road with a large and packed pub on the right-hand side, I was soon able to follow to West Mendip Way down in the direction of Ebbor Gorge. 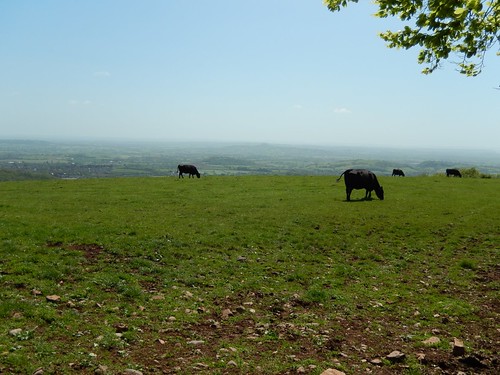 This suddenly reminds me that I’d begun this walk much later than at first planned, after a morning of baking brownies for another walk on the Sunday. Too often, if I don’t get up and out by mid-morning, I’ll give up on the idea of going for a walk and will resign the day to being somewhat of a waste… This time though, with the sun shining and reassurance offered by the extended daylight hours, I realised it was okay to set off for a long afternoon walk. I might even experience something different. 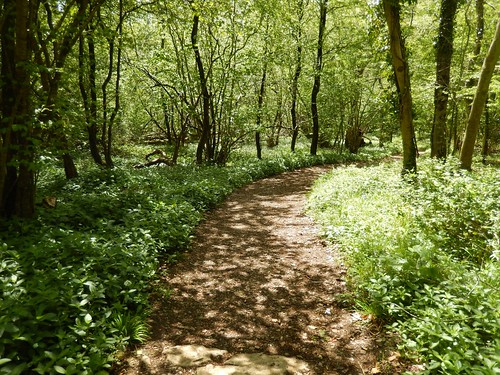 Below, you can see my lunchtime view, from the popular viewpoint at Ebbor Gorge. 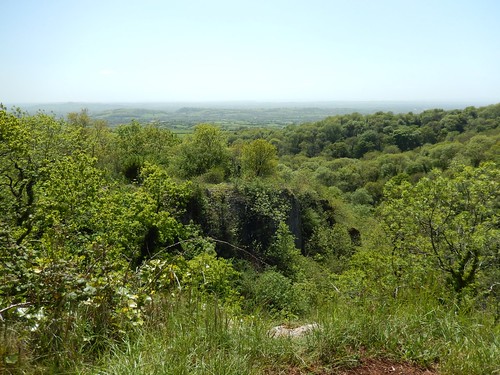 This should make for a great lunch stop on the day. The only downside to starting in Priddy is that you’ll eventually have to hike uphill to complete the walk. That is something I’ll make people aware of in advance, as I’m sure it wouldn’t appeal to everyone. 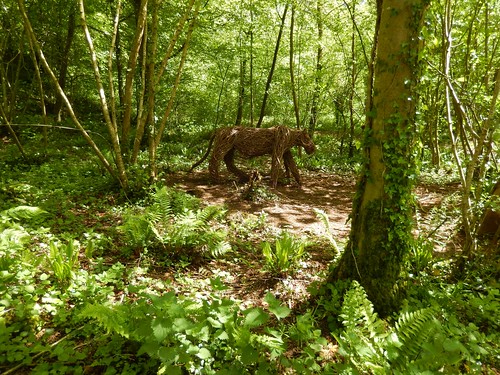 At the foot of the steps I know I’m going to have to climb again this coming Sunday, I discovered the latest addition to the large inhabitants near the foot of the gorge, in the form of this big cat! Elsewhere, a bear towers over you and I hope there will be more to come. 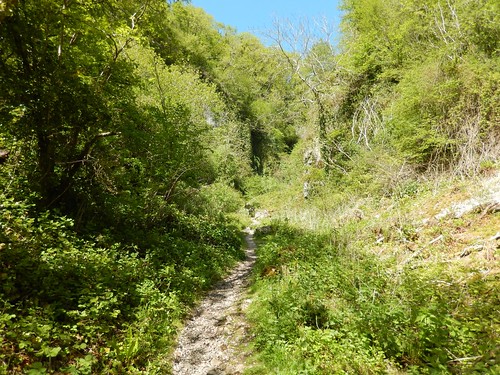 Deterring from my route-finalising duties for a moment, I headed off up and in to the valley of the gorge (my first look here for close to three-years) just for a refresher on exactly what I might find… 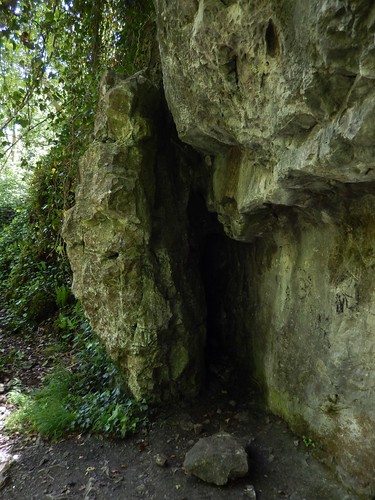 It’s a steep climb climb that few people seem to contend with. Perhaps there’s a natural tendency to accept that “It’s not Cheddar Gorge!“, as I admittedly do. 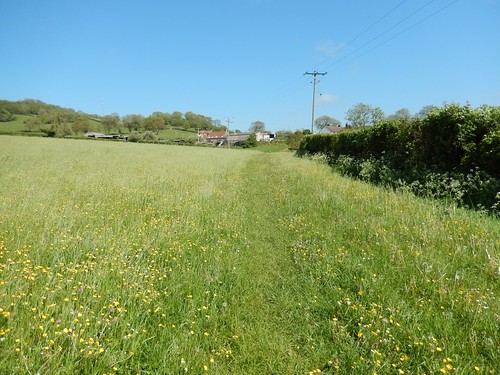 Back on the route home and heading down in to Wookey Hole, I picked up a very familiar series of paths that I used towards the tail-end of my last walk in this area. 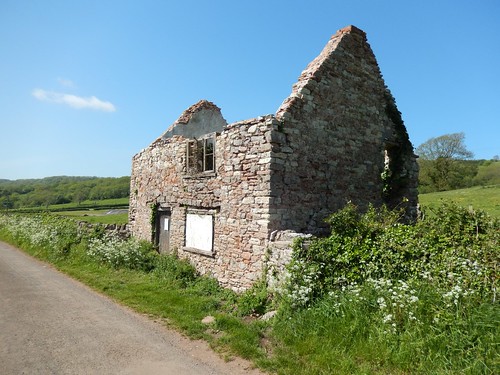 For the first time in several visits, I noticed this old building was no longer over-grown with foliage and that a notice had been pinned to its door; indicating an intention to resurrect the roofless structure by developing it in to a holiday let property! 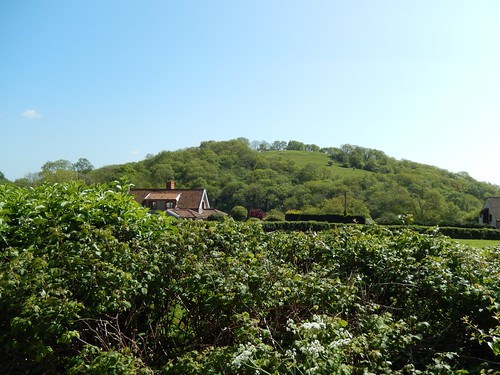 To the south, I could see Arthur’s Point, which I’ll be climbing within the first hour of Sunday morning, as a horde of us departs from the centre of Wells. 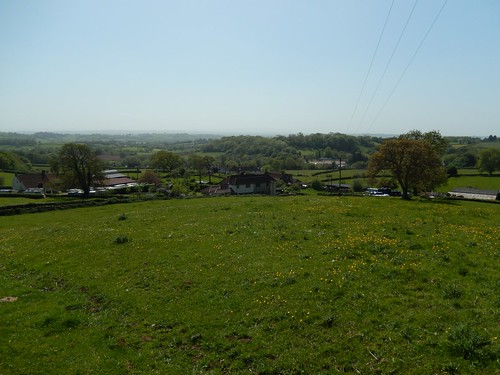 This was where the steepness began! 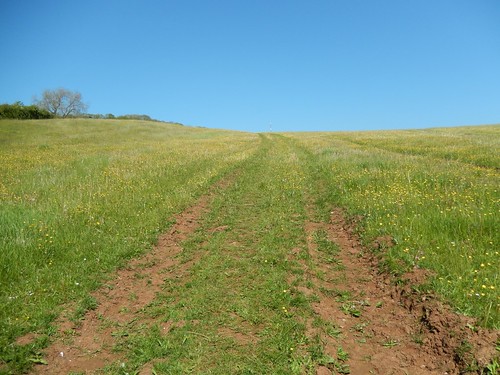 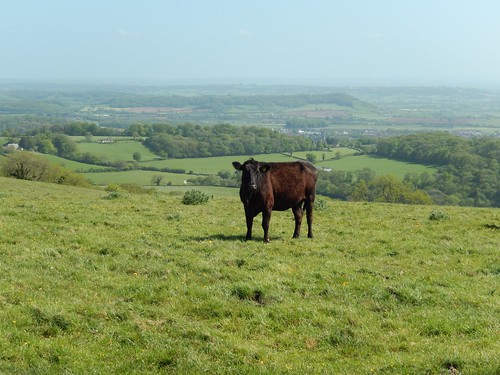 Fairly soon after, I joined the Monarch’s Way, which will lead me back up as far as the Mineries. 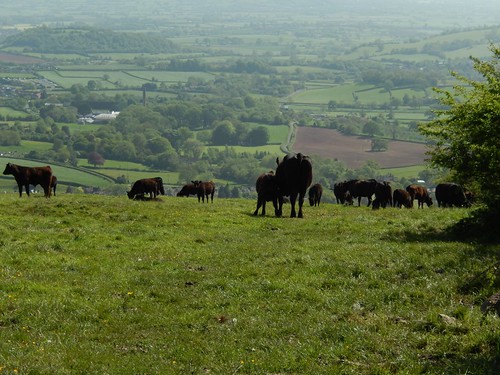 Rapeseed in bloom once again this year: 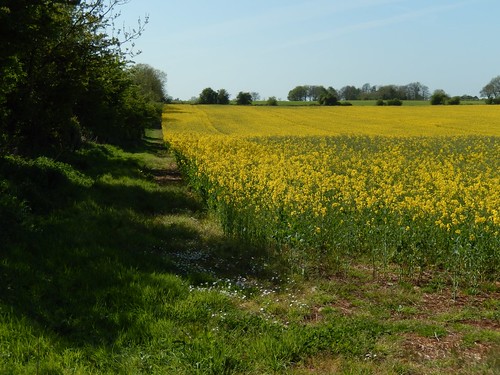 To add a little diversity to my walk, I decided to try a different path back across the Mineries. 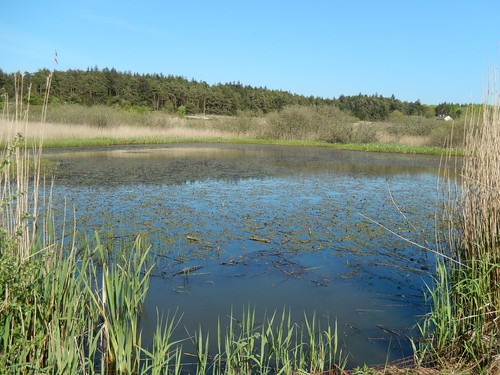 It is something I achieved almost three-years ago on my very first walk through here. I’m not even sure if I owned an OS map at that time, let alone whether I would’ve been able to have read and understood it. 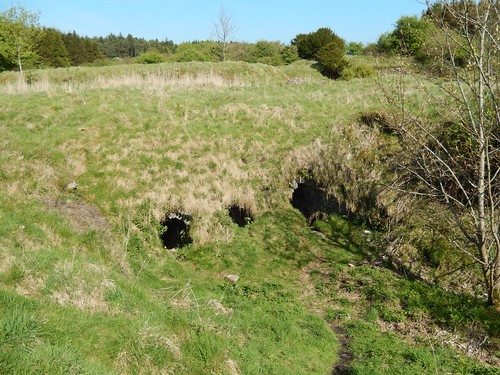 According to the map, there’s a path that runs just to the right of the main pond in the centre. It’s tricky to fine and does lie within a wealth of long, dry grass. I only really discovered it while following an unmarked path that led me beyond the “face in the ground” I’d not seen for a long time. 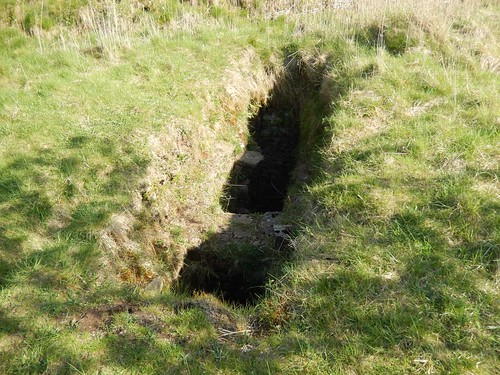 A little further exploration of the area (in an attempt to find the right path) revealed that these three holes appear to continue as a system of tunnels (quite possibly, where the term ‘minery‘ comes in… Unless it’s for potholing?). 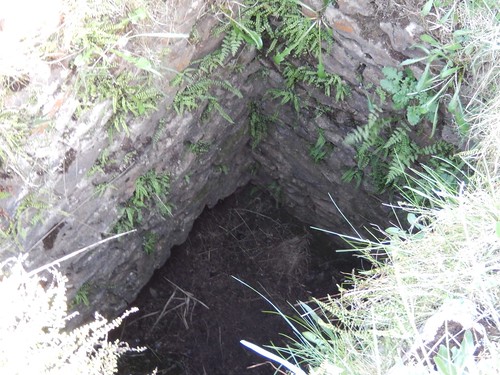 Soon after that, I discovered the path I’d been looking for and I was back at the road, ready to cross at the bend and take a different return route on a simple circumnavigation of the forest. 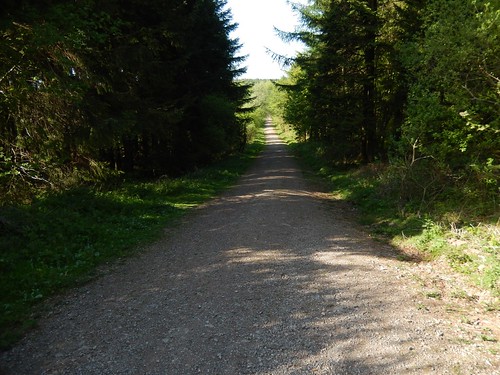 It wasn’t quite as simple as I’d hoped… Yet, all I really have to do on the day is to stick to the main gravel path that loops around the woodland. At around 17.00, I returned to my car, still with plenty of time to enjoy the evening. 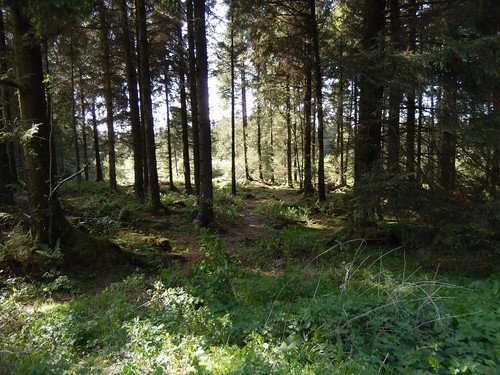