This was not my first walk-leading experience in Wiltshire but it was certainly more central and recognisable than the one I lead around Box near Corsham back in November. 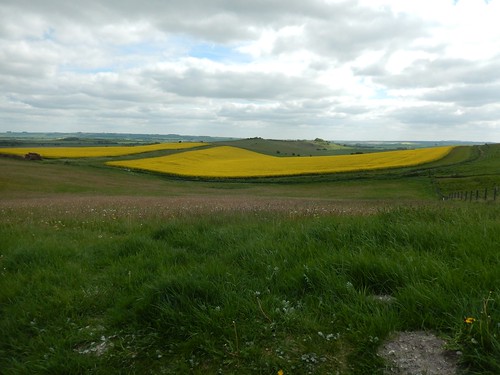 It’s identical to a route I follow in April 2014 on my own. I could remember dark clouds and hailstones from my first visit. Normally, I’d squeeze a pre-walk in between as well but, on this occasion, I took a bit of a gamble, having not walked these paths for over a year, with half-a-dozen followers putting faith in my direction. 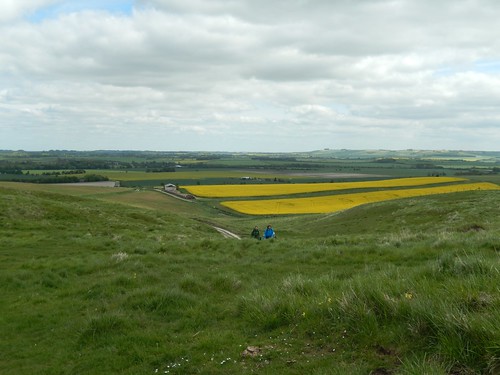 This might’ve been the first occasion of which I’ve filled all four passenger seats within my current car. It wasn’t quite the squeeze I had anticipated (although it is an estate model). But with five sets of boots and bags stuffed in to the boot, there’s every chance my motor was feeling the added weight as we cruised east along the M4 from Bristol. 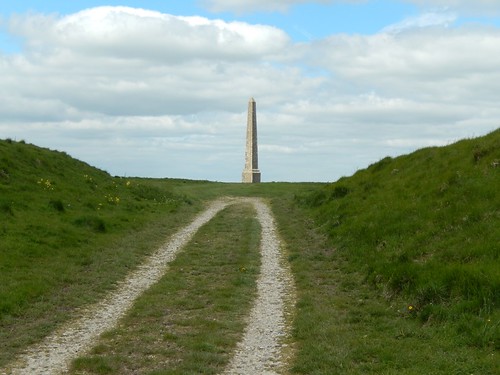 This submission to the walking group’s programme was quite a spontaneous one. Having recently spent the incentive voucher I earned for my efforts in 2014, I’m aware that another £20 in 2016 could come be very handy indeed. So, the same evening I returned home after leading this walk, I was online and composing a message for what will be my third walk of 2015, in late July. 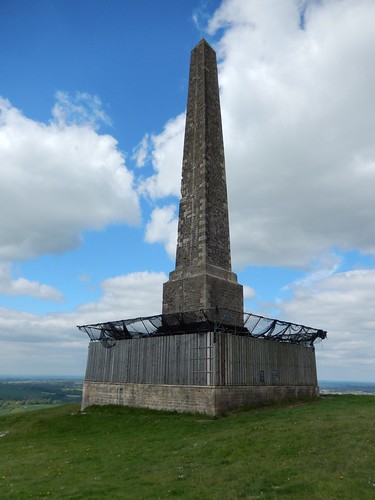 So, heading from the lay-by car park beside the A4, we set off on an anti-clockwise direction towards the Lansdowne Monument, as you can see in the photos above.

We took a ten-minute stop here, almost one-hour in to this walk with its late-morning start and it gave me an opportunity to share the chocolate brownies I’d made for the occasion – I’ll write about those in my next post tomorrow, as it was my first attempt; even though I’m very eager to relive the awesome experience I’ve just had over in Wales! 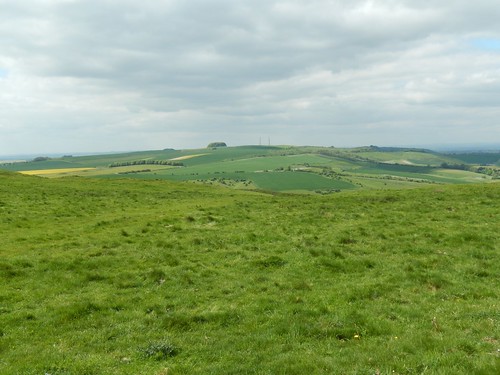 From here, we could see our next destination of Morgan’s Hill, with its twin transmitters sat on top. It was at this point, without properly checking either of my maps, that I made a distinctly wrong turn, following a different left-hand fence that soon led us back around to the south side of the monument! Someone, who shall remain  nameless, did actually ask me whether we had arrived at a second monument… Almost confusingly, this icon is referred to as the “Cherhill Monument” on current OS maps. 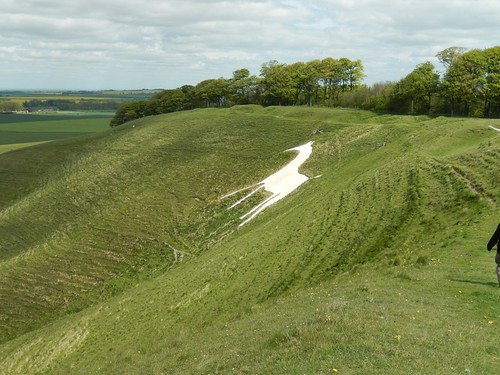 Just before all of that, we made a slight detour and took a moment to casually admire the Cherhill White Horse, before returning to the Ridgeway.

…Mentioning the Wessex Ridgeway has reminded me that I used to know someone (at the time, local to these parts) who I believe co-ordinated a team of volunteers to look after the right of ways here… I wonder if he still follows this blog? 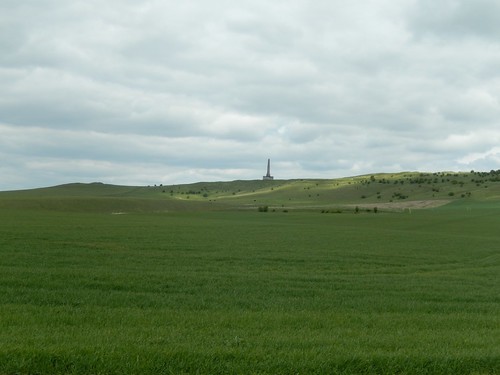 I soon found myself walking quite far ahead of the rest, which is very true to my form. Recent experiences in Wales have suggested to me I needn’t do this constantly, especially when I’m confident of the route and direction ahead. Slowing down a bit and almost walking with the group (instead of leading from afar…), is something I aim to continue practising the next time. 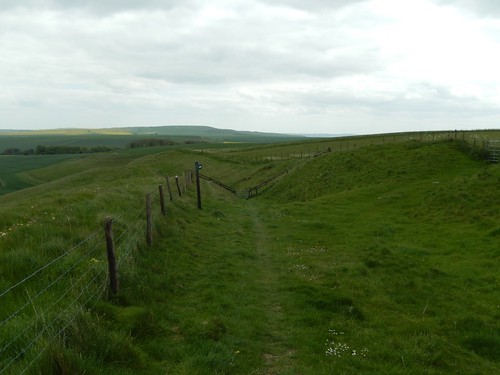 Up and over Morgan’s Hill and it was time to join the Wansdyke path for much of the remainder of this walk. 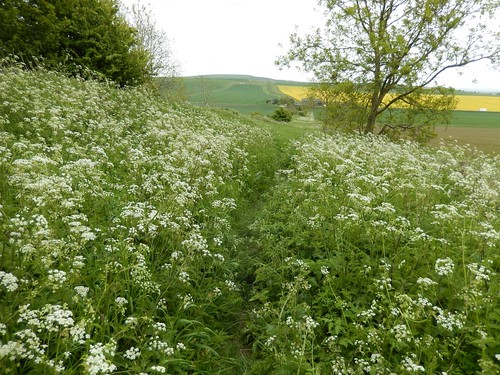 After crossing a major road around the halfway point in the walk, we took a seat beside the dyke and had our lunch. 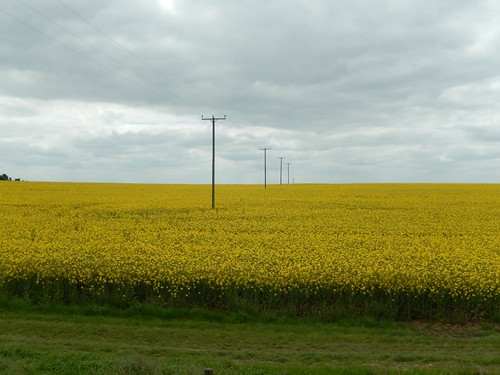 On a dry day with rapeseed still in bloom, it was almost the perfect way to spend a Sunday afternoon. 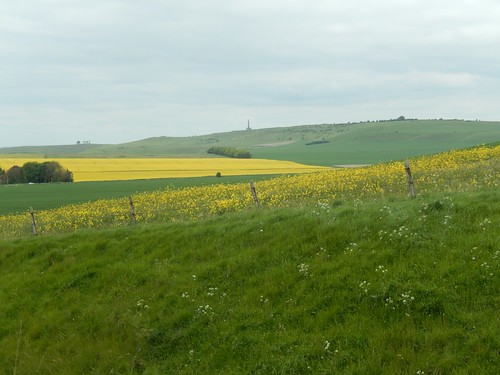 As we continued along the Wansdyke (sticking to the ridge, high and clear of the ditch), passing through a succession of stiles and gates, we soon came across a herd of timid but ‘fuzzy‘ cows… Could anyone tell me what breed they are? 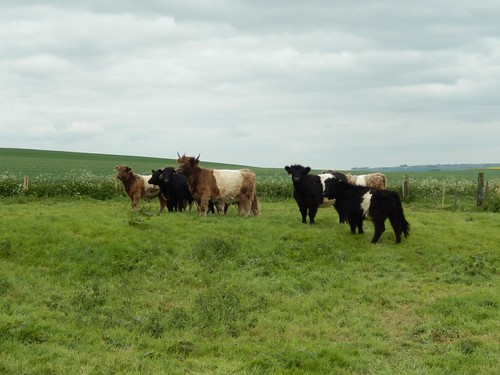 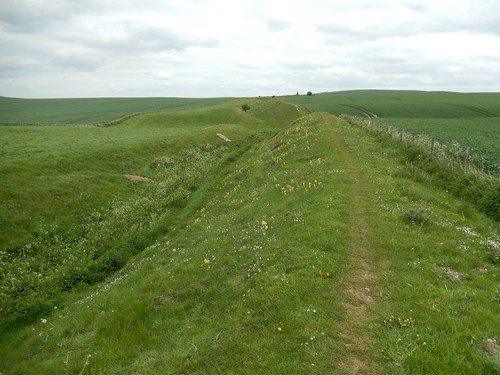 We maintained a constant pace amongst our small number. There was no need to rush and, long before this point, the real hardwork of climbing uphill had already been completed. 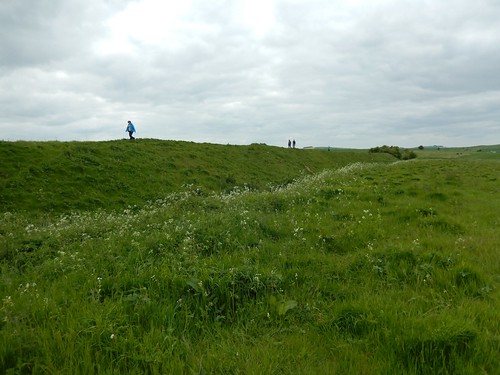 I do enjoy walking historic routes like this, even without all or any of the facts! I took this next photo as we left the Wansdyke to head on towards the main road. Here, we’re looking back far along the way we’d come. 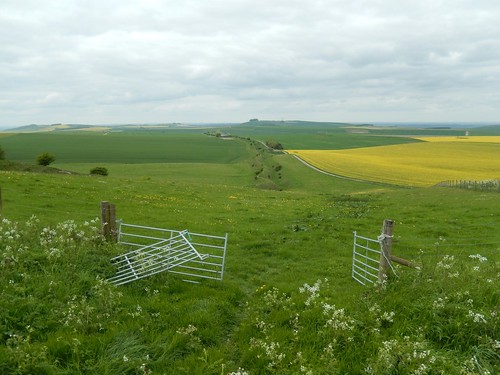 Having bought an OS map of the area just in time for this walk, I had considered making a detour from the original route at this point, because I could remember the discomfort of following this track for the best part of three-miles last year… But, looking carefully, there was really no other way back to the cars, without making for an extensive detour past Avebury. Nobody complained.

Despite not having ‘pre-walked‘ the route for over twelve-months, I think the hardest thing I had to do was drive for almost an hour in each direction. I think that can deter people from visiting certain areas of countryside (it’s always been a big excuse for my not to have previously visited the Brecon Beacons) and yet, there is always something to discover… With the temperature rising, I decided to switch the air-conditioning on for an extremely rare occasion (a real treat for my passengers)… I wasn’t sure of how to use it and I’ve since realised it could’ve been utilised a little more efficiently. But while it had its effects; as you can also expect, it took a big gulp from my petrol tank on that day and I’ve been reluctant to switch it on again ever since!

Thanks for reading. I cannot wait to tell you all about my weekend in Wales!!