This was the very beginning of a long-distance coastal walk a friend and I have committed to tackling together. 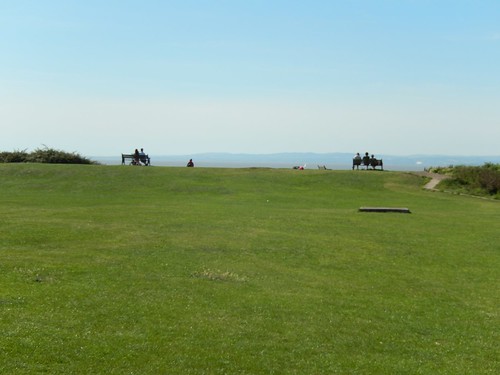 Our inspiration comes from a book titled, the Somerset Coast Path

, which was only released a year ago. From Bristol, we’ll gradually make our way west, south and then west again, following the coast as far as the border at North Devon. 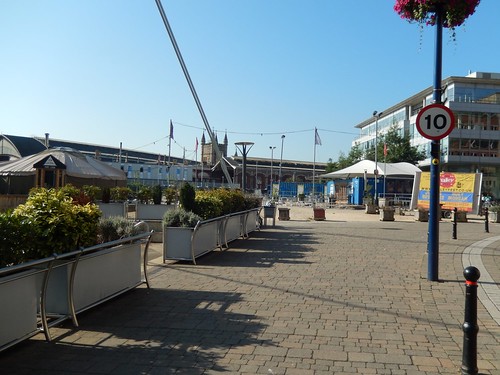 Officially, the West Somerset Coast Path starts a good forty-miles south of where this walk begins. So, for this walk and the chapters to follow, I’m taking you back along an unofficial coast path walk. A couple of reviewers have criticised the author for this slight misleading but it also looks as though Damian Hall reminds you of the fact within his words.

It was about 8.30 when we reached the Long Ashton Park & Ride to the south of Bristol. We’d already left one car at the end point in Portishead. With the annual Balloon Fiesta commanding the weekend, we were both keen to get in and out of the city before the masses broke free. We needed to get to Temple Meads railway station for the official start of this (unofficial) walk and, as parking in the city centre can be hideously expensive (I recently paid £18 for 7¼ hours), we agreed this would be our best option. 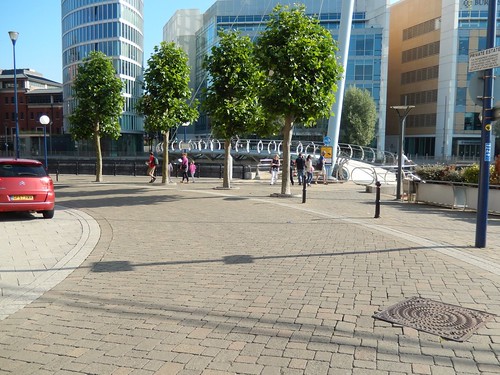 It had been over a decade since I had last set on a bus and the greeting from this driver wasn’t any more ‘inviting‘ than the one I’d received back in 2001. But I think it was only £4 for the two of us to travel. They only offer return tickets but it’s still far cheaper than parking for a few hours. Neither of us knew exactly where the bus was going to stop in relation to the train station but fortunately this driver made one good deed in pulling over (without anyone having to ring the bell) for us to depart at the nearest roadside shelter.

Following the guide, we entered the train station building before turning left and following pedestrian paths through an area known as Temple Quay – a place I have only previously discovered from a series of wrong-turns in my car! 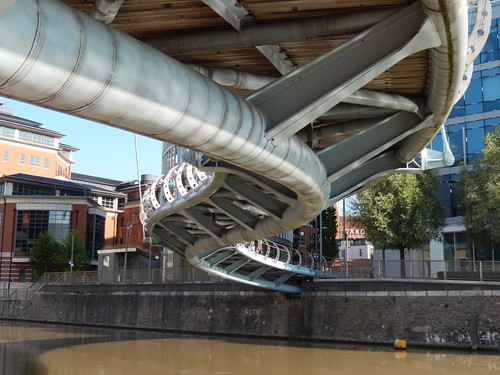 We didn’t get to cross Valentine’s Bridge (see above) but as descended steps to join the River Avon, we turned left to pass beneath; from which angle, we could admire the twisting architecture. 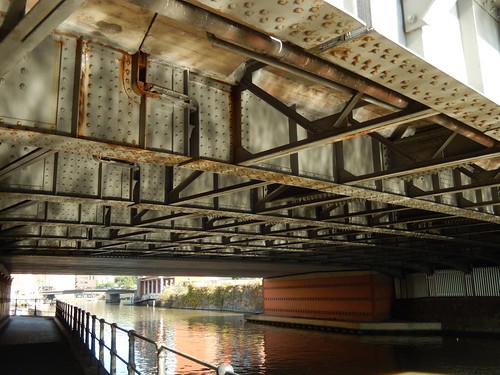 Bearing traffic from the road above; the next bridge was more traditional yet still impressive. One of the many views you wouldn’t receive by simply driving through a city centre. 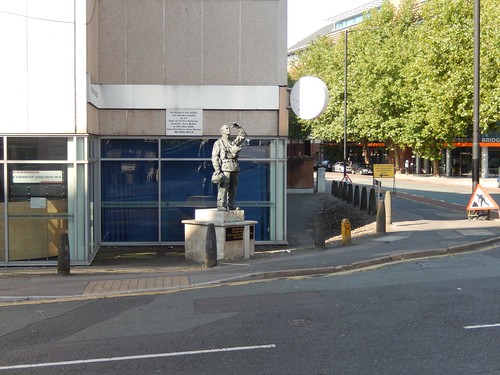 Walking through the city, we passed a number of monuments, beginning with the one above, which was placed in honour and memory of a firefighter who lost his life nearby, in the call of duty. 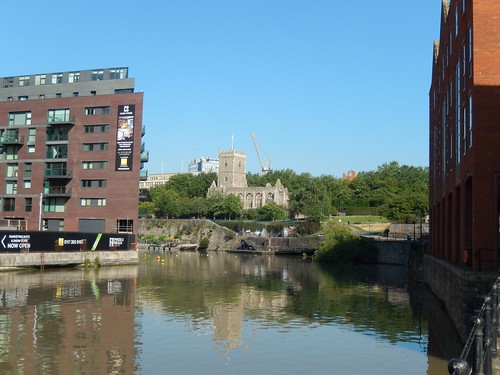 Crossing the Avon to its northern side, we were on the approach towards Castle Park and its church. 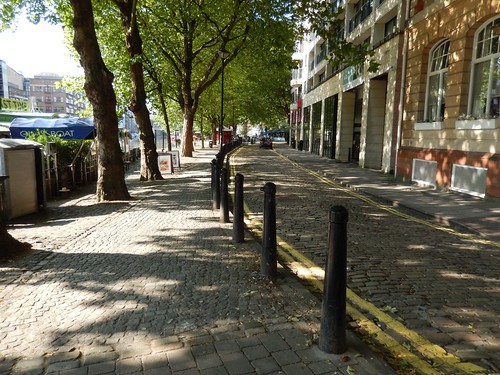 Soon, we were tackling the cobbled streets along the southern boundary of Queen Square, before closing in on Bristol’s glorious harbourside. 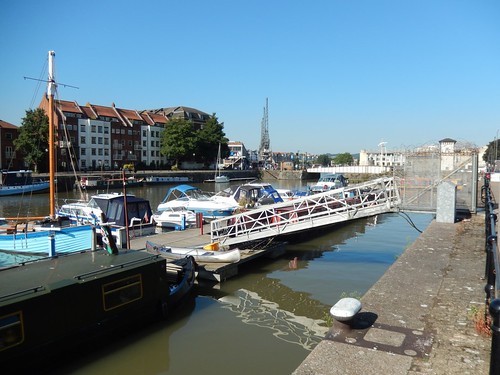 Those tall, dark cranes plotted the path ahead, which would take us right alongside the entrance to the M Shed museum, where Bristol’s extensive history is set out for all to admire for free. 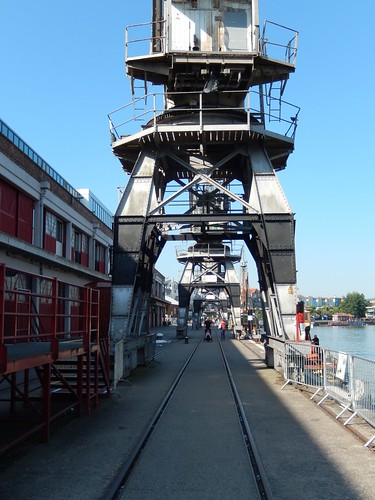 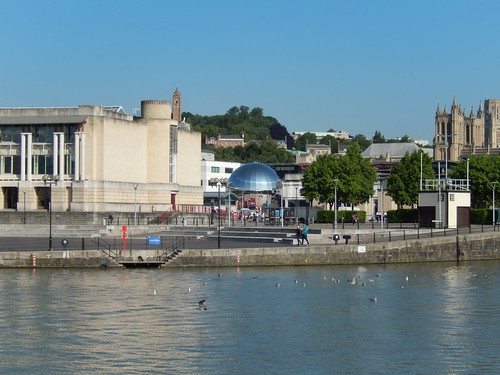 Across the water, you can see Millennium Square. A hub of frequent festivals throughout the summer. 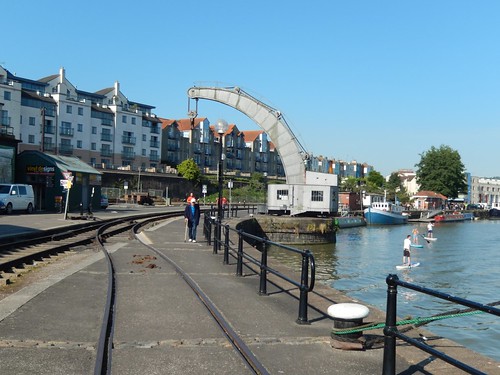 I don’t know the name of that watersport but it looked like it requires a lot of trust and courage in your own balance! It’s probably quite popular on the Mediterranean, yet almost distinctly out of place within a British city… Maybe one day I’ll try it! 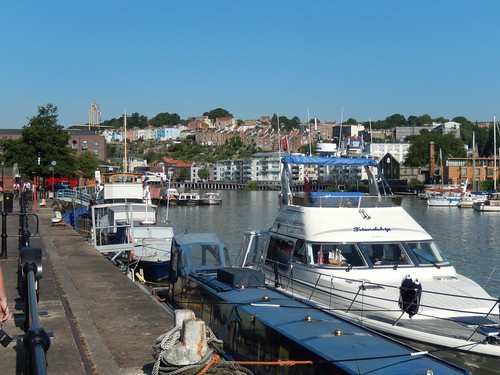 Those coloured buildings are part of Hotwells. Further on and higher up, you can find the prestigious village of Clifton. 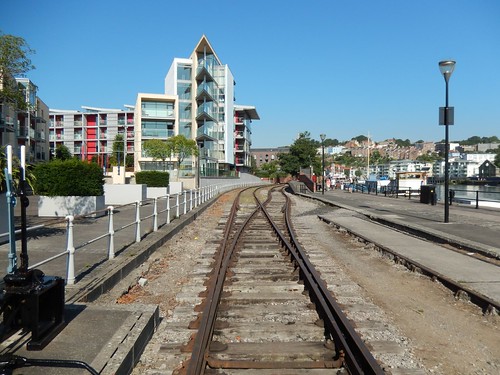 An old steam train remains active along this short stretch and remains a popular tourist attraction. 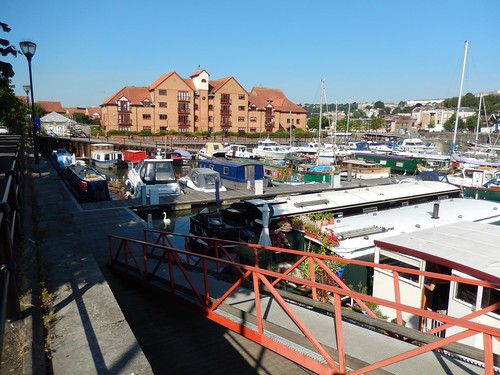 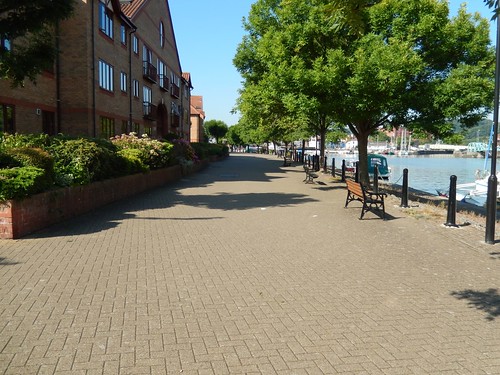 A little further on and we we passing beside the yards of local boatbuilders. 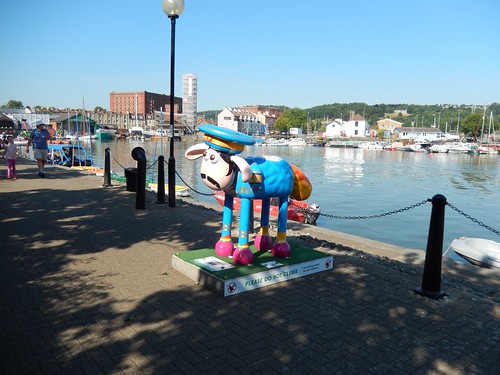 With Shaun the Sheep all over the city and trails mapped out so that people can ‘catch them all‘, Bristol must really be bustling for tourism right now. I made an effort to see a number of Gromits in 2013 but I’ve little enthusiasm for doing the same this year. Still, this one was my first! 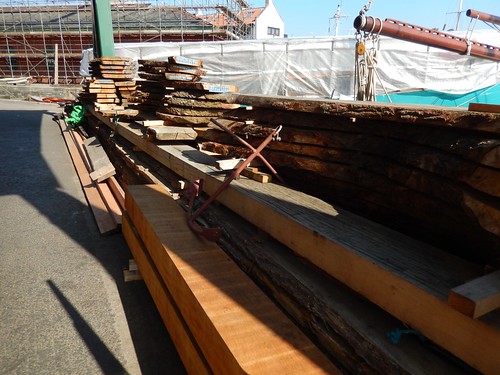 You could’ve blindfolded me by now and yet I still would’ve felt an urge to stop and admire this stack of hardwoods! 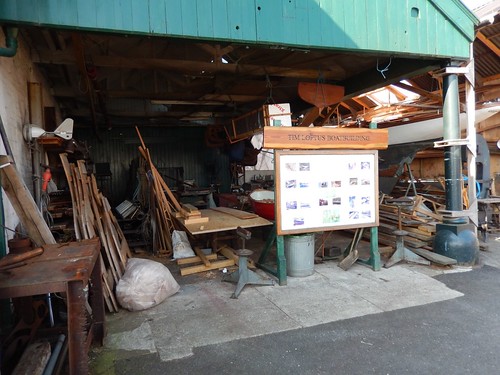 Tim Loftus’ workshop is always so open. I wonder what it’s like in winter? 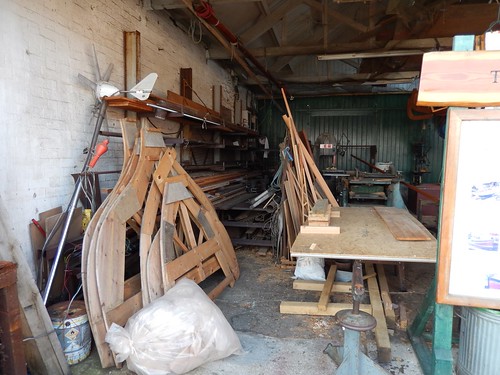 It’s almost inviting but for the mess (like most good workshops). 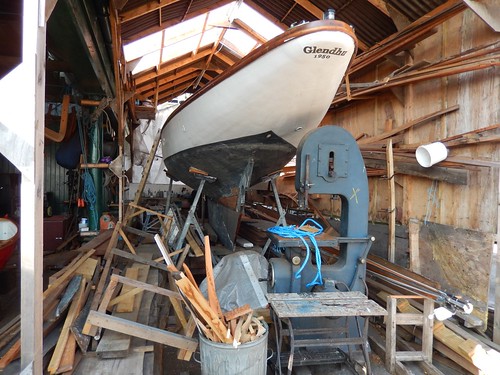 I noticed the blades had been removed on each of the bandsaws. I assume this is so that people are less likely to hurt themselves, should they wander in. 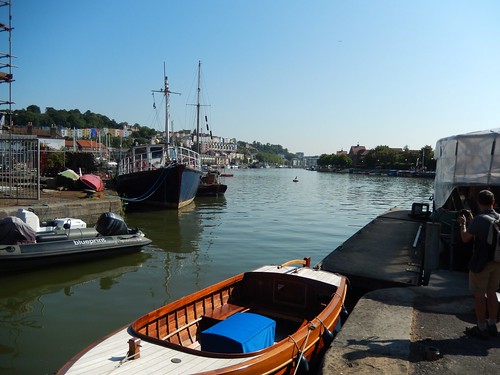 It was soon time to leave Bristol’s hardbourside behind. Such a tranquil place, so early in the morning. It’s always inviting; a constant visual splendour. But somehow even more appreciable, in absence of the crowds. 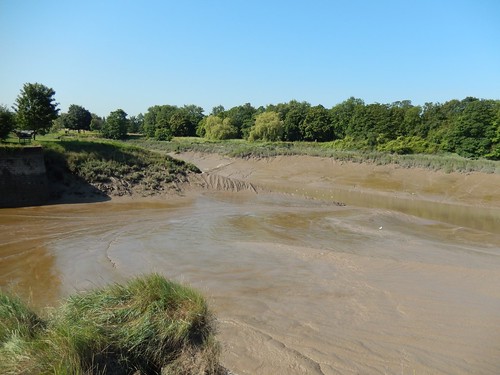 We were now looking to cross the River Avon before it passes beneath Bristol’s most infamous bridge. But we soon came to a point at which it did not seem possible to cross over and, revisiting the guide, we realised we’d travelled on a little too far. 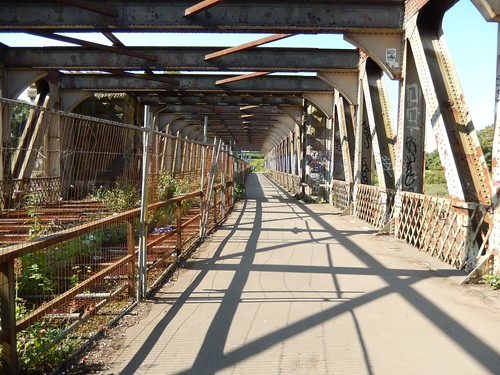 Before long, we crossed the railway thanks to another of Bristol’s best bridges and were on our way to joining the Avon Cycleway, which would leave us alongside the river and on to the village of Pill. 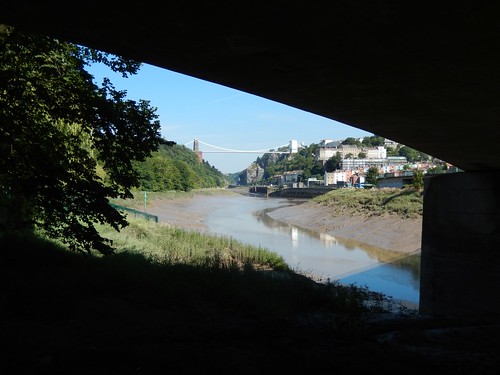 Beneath a road bridge, I stopped to apply sun cream for the first time. It was mid-to-late morning and the sun would soon be at its highest. As I remember it; the forecast was about 24°C for this day. This was also where we got our first clear glimpse of the Clifton Suspension Bridge.

Yes, THE bridge most commonly associated with this city. 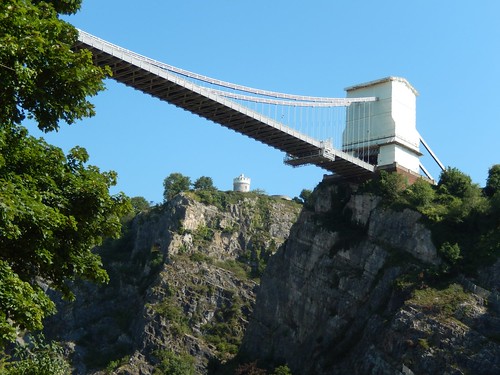 It looked as though some kind of conservation or restoration work was under way on the eastern tower. 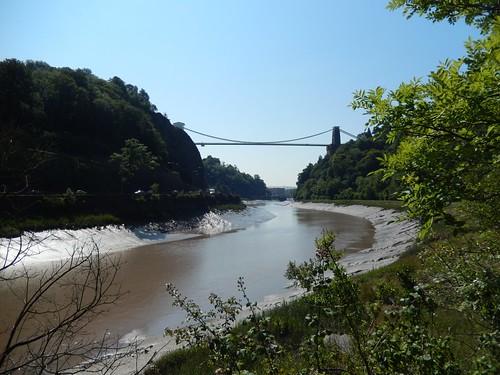 Now, I mentioned the cycleway earlier and these are typically some of my least-enjoyable routes to walk along. For one thing, the ground is extremely bland, dry and monotonous – all of which adds to your fatigue. Secondly, you’re constantly having to give way to passing cyclists from both directions (even though it is a shared path).

One tiny woman (who we’ve since referred to as “The Bullet“) shot past us like no runner either of us had seen before. Tension strife throughout her tiny body. We felt a little uneasy as she cried a “Five-minute warning” before speeding past… I kept glancing over my shoulder; half-expecting a stampede of athletes to emerge, ahead of an evolving cloud of dust…

Then, true to her word, Bullet was heading back in the direction from which she’d been fired and we were both required to step aside once more. 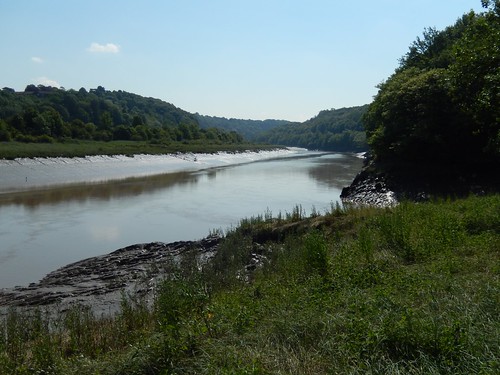 For all of what must’ve been a good four-miles along this stretch, it was very hard-going in this heat. Once we lost sight of the river, thanks to hedging on either side of the path, we just had to try and keep our heads down and our legs pumping until we finally reached salvation at the hamlet of Ham Green. 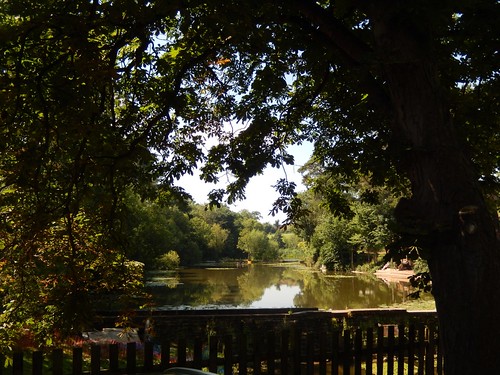 Passing the private fishing lake above, we soon found a pair of benches, sheltered from the sun and took a few minutes to refuel. This wasn’t an official lunch stop though… Looking ahead, we could see we would still need to pass the M5 motorway and felt it would only be right if we passed the ‘very worst‘ of this walk before settling down. 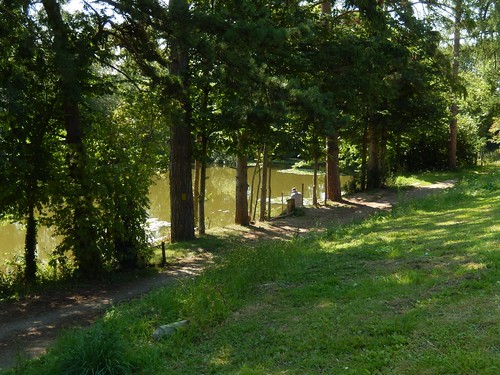 I’m going to call this the end of Part 1 and I thank you for reading. From here, the journey to Portishead is only a matter of miles but there’s a lot to be recounted along the way.

4 thoughts on “Bristol to Portishead (Part 1)”