It was 8.15am by the time my car was loaded with a long weekend’s worth of kit. I left my village with a good three-hours of driving ahead of me. This would be the furthest north I had ever driven my car and a first for me personally, having never been so close to the Peak District. 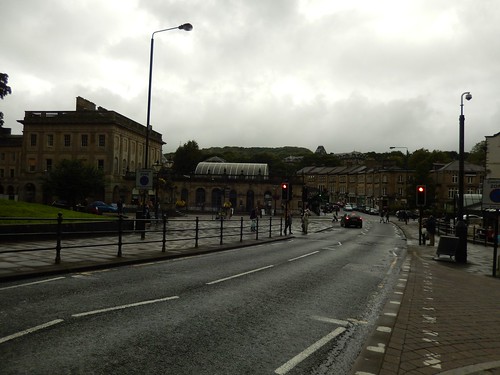 Weather forecasts made for an ‘uninviting’ prologue. As I passed Birmingham while following the M5 motorway north, the rain began to fall. Then, as I later left the M6 at Stoke-on-Trent, an incredible downpour emerged to flood my anxious mind with uncertainties.

Thoughts of turning back, to cancel this weekend and head home, were beginning to consume me… Somewhere in my mind, was the idea to stop in Buxton for a couple of hours and to see how the storms would play out. 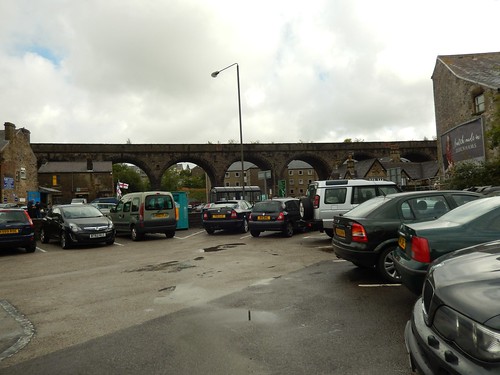 Buxton was only a ten-minute drive from my chosen campsite for the weekend. After a good three-hours and twenty-minutes of driving, a stop somewhere was going to be essential. I’d passed huge rocks and cliffs as I drew closer to the town. But for the lack of lay-bys and parking spaces on the busy A-roads, I’d have some photos of the spectacular landscape for you, which would almost be visible from my tent.

One of my intentions all along had been to visit Buxton; I just hadn’t expected to do it so early on. It was part of a plan I’d mapped out for a wet weekend with limited walking opportunities. Buxton has a museum of local history and art, that’s free to enter and explore. 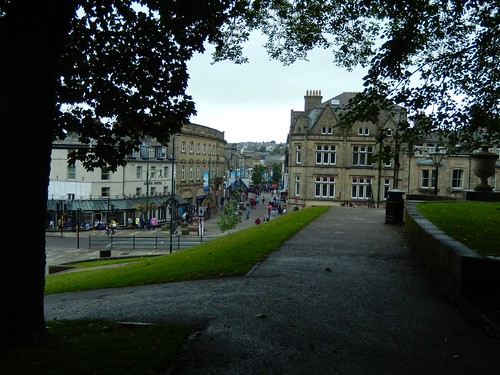 There are several car parking opportunities within the spa town (it’s a bit like Bath, with its Roman heritage) but I spent a good half-hour driving around – up and down, back and forth – before settling on a long-stay space at only £2.50 for four hours – I don’t think parking down here in Bristol has ever been that cheap! Compared to that, I think an all-day pay-and-display ticket at the train station was £4 but I didn’t want to stay for too long. 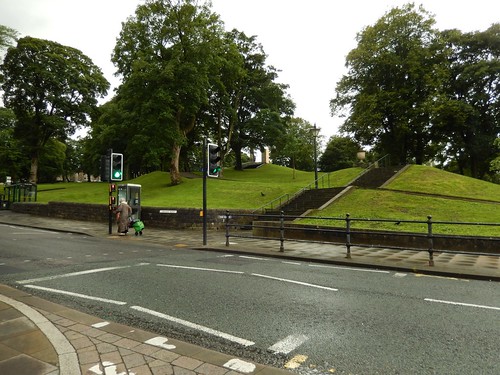 Right across the road from the museum, is a hilltop area known as The Slopes and it’s the signposted destination for anyone who desires the most convenient museum parking. 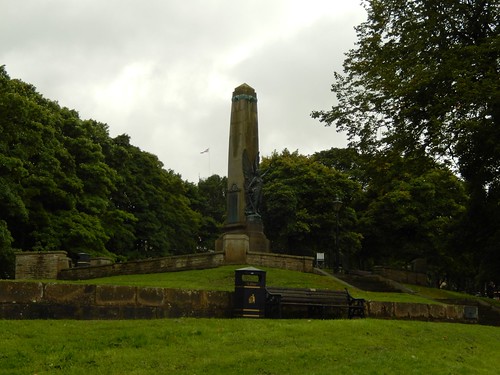 I had found this without too much trouble but then I also realised that the only pay-and-display machine nearby was apparently not working. A little unhelpfully, the notice told you that it was out of order but gave no indication as to whether or not you could park here freely or to where the nearest working meter might be! Not wanting to risk a hefty fine in spite of other cars parked close by; I moved on to eventually settle in to a long stay bay. 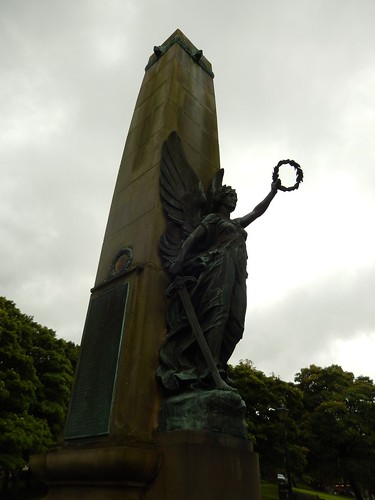 From here, I began to explore the town on foot; to take advantage of this break in the showers. I could always dash to the museum should the skies begin to leak again. 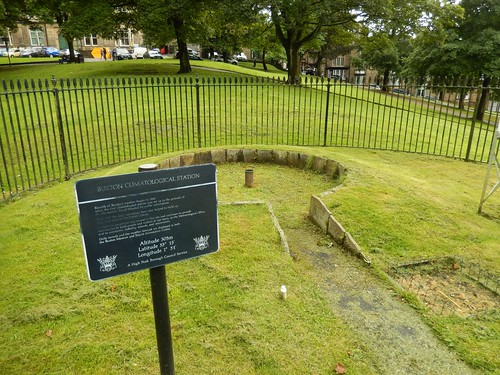 Also at the top of this hill was an old climatological station, safeguard inside a ring of black iron fencing. 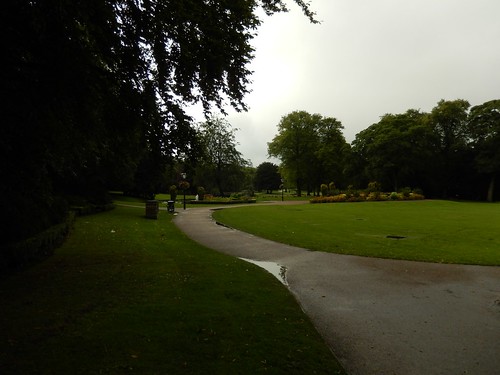 Descend one side of the slope and you’d reach the tail-end of the high street, which also contains its own shopping centre. Down another side, I reached the entrance to Buxton’s Pavilion Gardens. 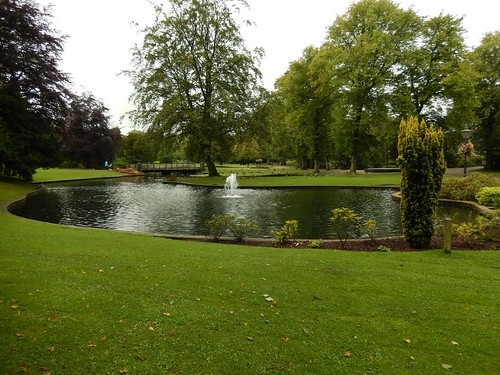 It’s free to explore (unlike one garden I’ve come across in the city of Bath) and so I took a large loop around the grounds before continuing on to my next point of interest. 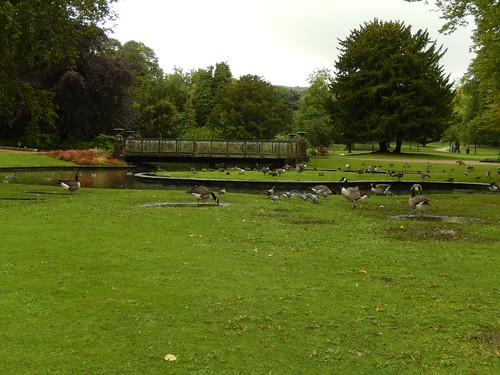 Even on a damp and gloomy day with road traffic audible in the distance, this green space was inviting. 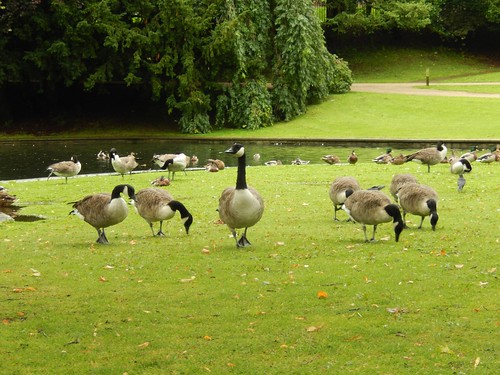 A popular site for local dog walkers, while an array of bird and wildlife can also be spotted. 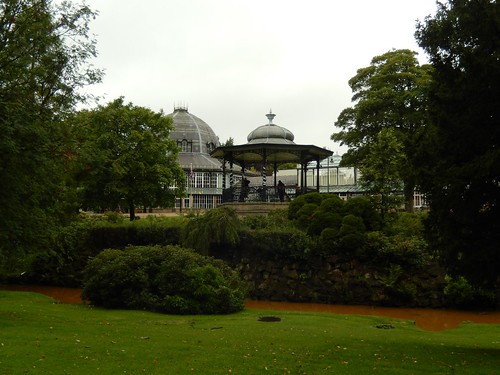 High and beyond the distinctly brown, muddy river was what appeared to be a bandstand. To the left of that, you can just make out what I’ve now read is the Botanical Observatory. 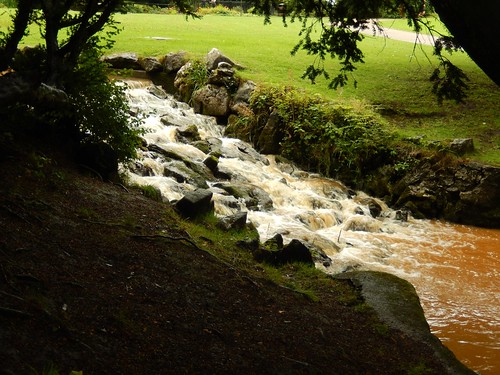 I lost count of the number of squirrels I saw and heard while walking beside the trees that surround the park. 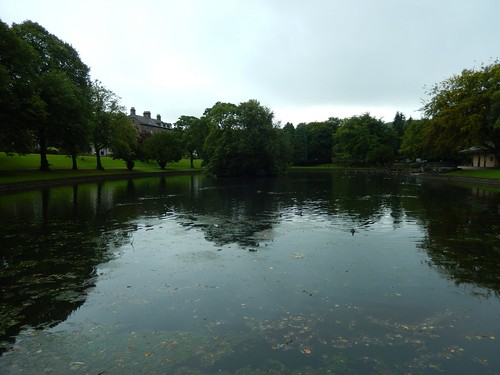 You’d think they’d been well adjusted to humans in such an urban environment but, just when I thought that fortune was in my favour, this guy, below, turned and ran as my camera’s shutter moved in to focus. 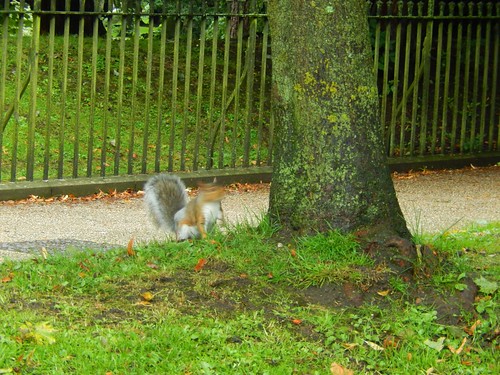 After my loop around the park, I returned in the direction of Buxton’s Museum and Art Gallery. A little disorientated but I’d find my way there soon enough. 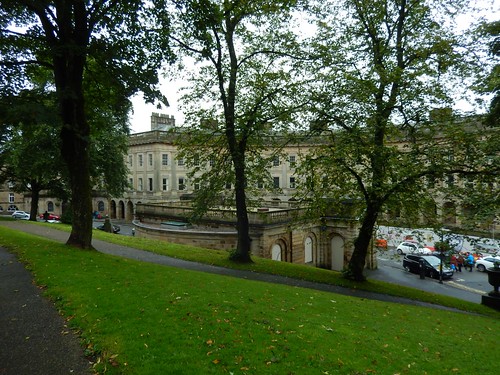 Being a spa town, Buxton has its own Crescent. My photo, above, doesn’t capture it perfectly but I hope you can make out the curved front to this row of buildings. To the right of this would be the baths. 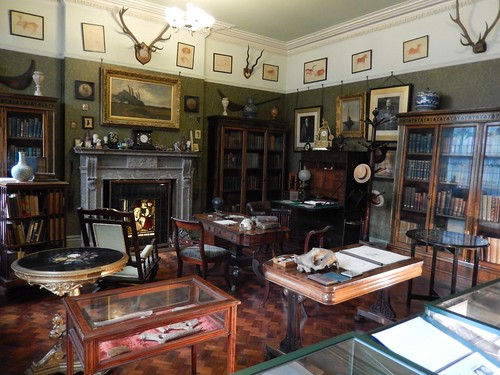 Inside, the museum staff were friendly and welcoming. A ‘gift-shop’ style counter holds the centre of the room, with the walls covered by the work of local artists – including an inspiring series of pen and ink drawings by a woman who not only suffers from agoraphobia but draws upon her own fears and nightmares to produce her work.

On the same floor was an exhibition room with another woman’s outstanding attempts to capture a year in the life of a local river through digital photography [I do wish I made a not of their names]. 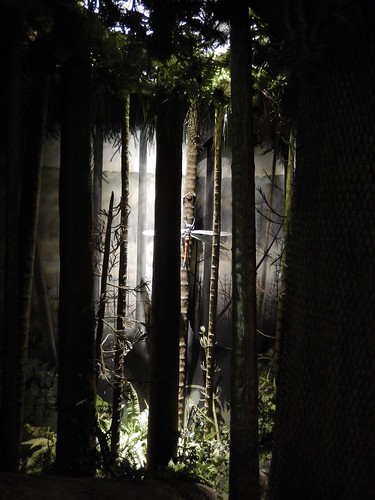 Up on the first floor is where the journey of local geographical history begins.

If, like me, you’ve ever bought an OS map for the Peak District, you’ll know there are two available – one covering the White Peak to the south (which I had bought); the other covering the northern Dark Peak. Now, the White Peak is essentially formed of uncapped limestone, while up in the Dark Peak, the limestone is covered in a cap of Millstone Grit (I’m sure a budding geologist would be able to tell you precisely what that means). 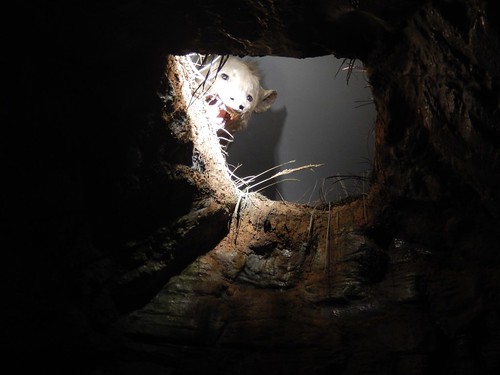 There are also examples of bones, fragments and fossils that have been uncovered across the Peak District, along with animals dating back to prehistoric times, who would’ve called this land their home.

Just watch out for the bears in this space – and don’t say I didn’t warn you!! 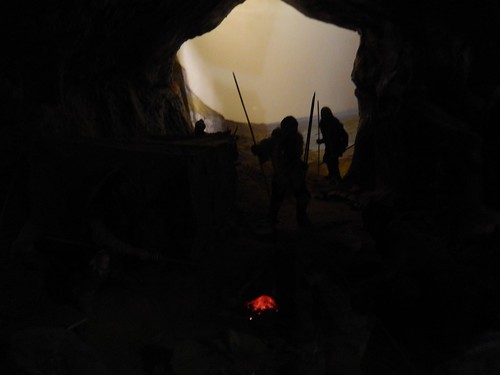 It proved to be far more interesting than I could’ve imagined.

There’s another little tale to my afternoon in Buxton and I’ll save that for my next post. Buxton left a very warm and positive impression upon me and I’d happily go back there, given the opportunity. Before my visit, I was only vaguely aware that this town produced a nationwide supply of bottled water. Now, I felt like I’d seen much more of what it had to offer.