With a good half of the walk complete and after a good half-hour of resting for lunch, it looked as though my return route in to Dovedale would be simple; following the River Dove through Wolfscote Dale. 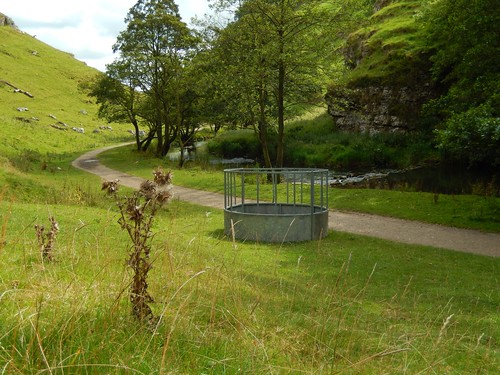 I felt confident enough that the hills and steep climbs were now far behind me. Perhaps I had tackled this walk in the right direction after all… To see the route, please follow this link. 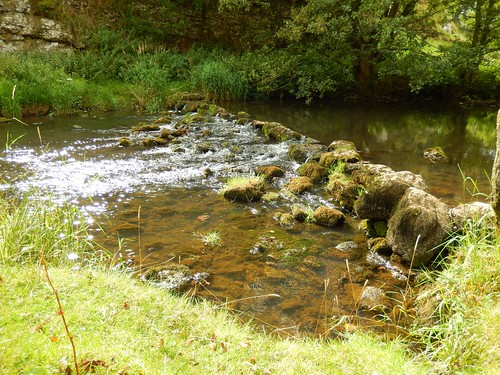 Too often, I’ll find myself wanting but struggling to enjoy a riverside walk like this… 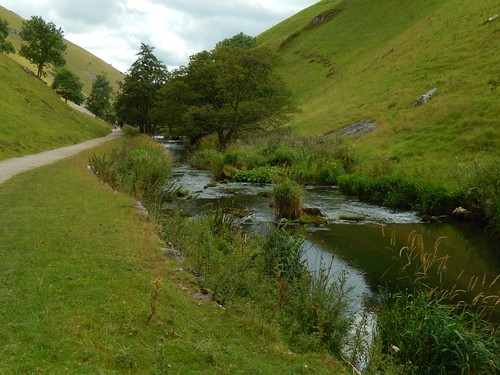 That’s usually because I’m having to stop, turn around or stay alert for cyclists… Fortunately though, this path is strictly laid out for walking. 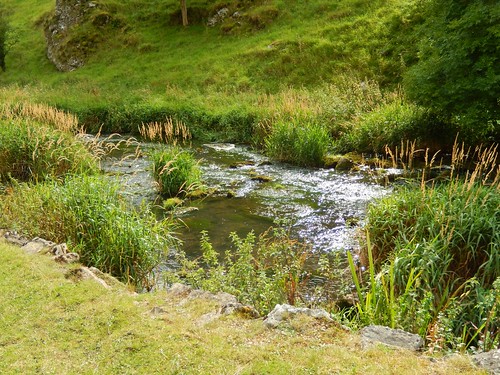 For the entire stretch, the scenery down to my right is just gorgeous. 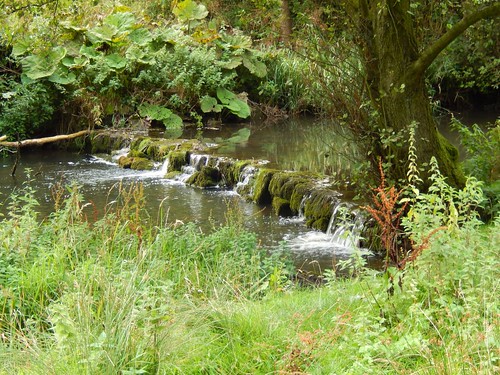 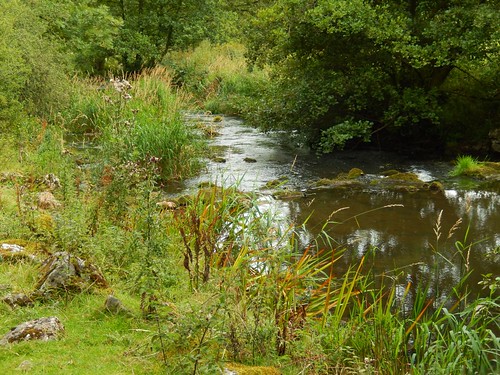 In fact, I can look in any direction and there’s something for my camera to point at and for me to admire. 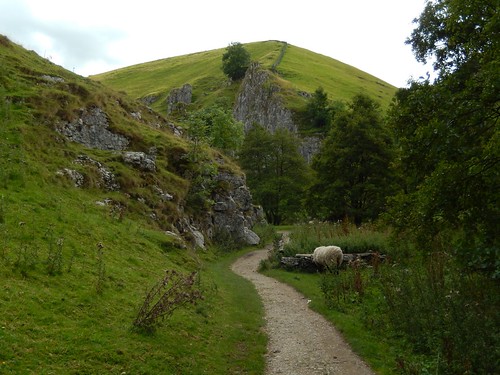 This portion of the walk still resides deep within the valley/combe/dale/cwm or Wolfscote. 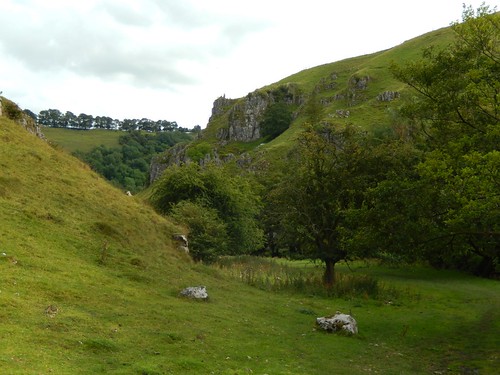 Knowing a little more about the term ‘dale‘ now, I wonder whether it could be used to draw attention and attraction to lesser-known parts of the British countryside…

For example; here in North Somerset, we have the Gordano Valley, only a stone’s throw from the M5 motorway…

When looking for a walk in the North Somerset area; I’d assume most people are either looking for a stroll through a coastal town or, they’re instantly drawn to a portion of the Mendip Hills.

But if you changed that other name to the Gordano Dales… Would that immediately attract people from all over the UK?! 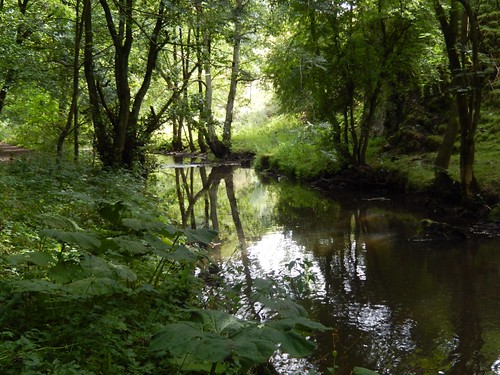 …Or, am I just rambling with nonsense? 😉 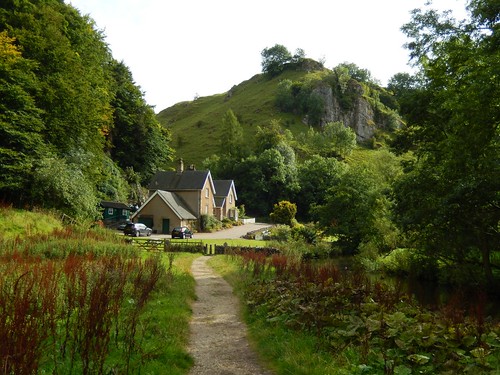 Arriving in Milldale, the path briefly terminates as you reach a tarmac road that crossed a bridge. A short pavemented walk in to the village allows you to reconnect with the same riverbank, shortly after an optional toilet stop. 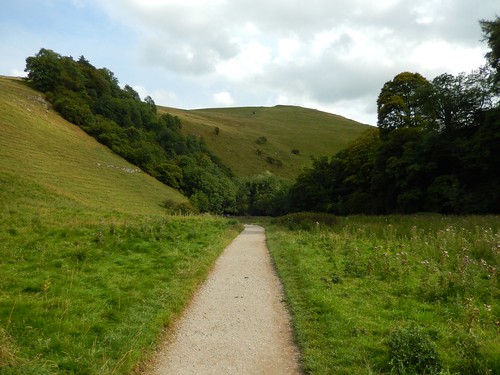 Very soon after, you’re back walking down the dale with a clear, easy to follow path beneath your feet. 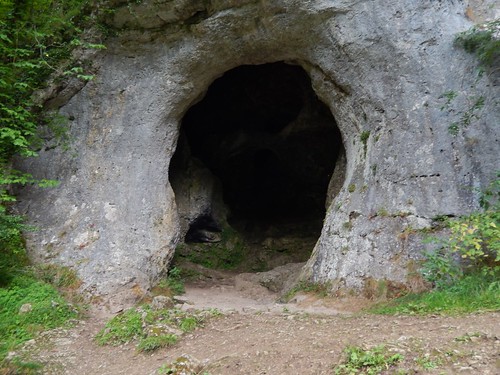 A little further on and I soon discovered this large caves bored in to the face of the limestone cliffs on my left. 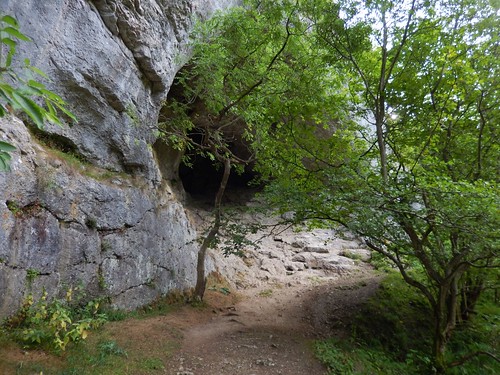 Further up the slope, a pair of openings resembled a pair of eyes, glaring from the rock. 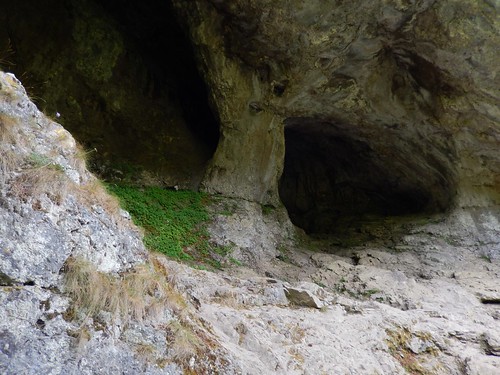 I stopped for ten minutes here to finish off the last of my lunch. A small family soon followed me up and as the kids explored inside the ‘eyes’, they noticed hooks that appeared to be fixed to the ceilings. I wasn’t feeling a bit worse for wear in my legs (particularly my knees, strangely) and so decided not to go in after them. 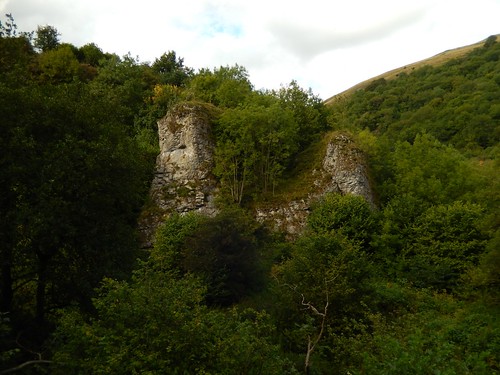 As I returned down to the riverside path, another group of kids were clambering all over the interior of the lone dwelling. 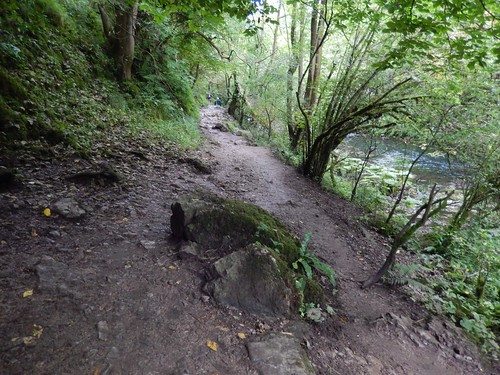 Then, the path did something highly irregular and became quite a challenge to follow…

Further on, I would see a pair of mum’s wheeling pushchairs… I can only imagine they would’ve turned back at this point. It seemed so strange to me, to find this as I was travelling closer to the official Dovedale car park. 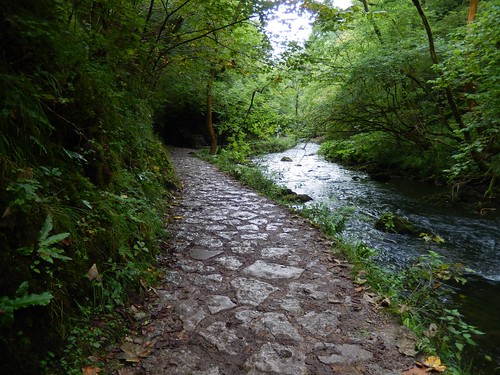 I really liked the almost ‘tortoise shell‘ effect of the path beyond that (yes, I’m sure there’s a better term for this design). 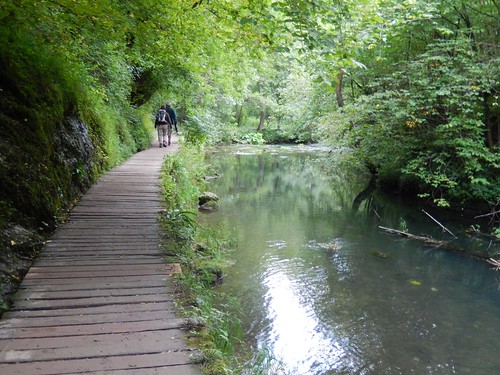 As the path transformed once more, I found myself treading along a succession of wooden boards. 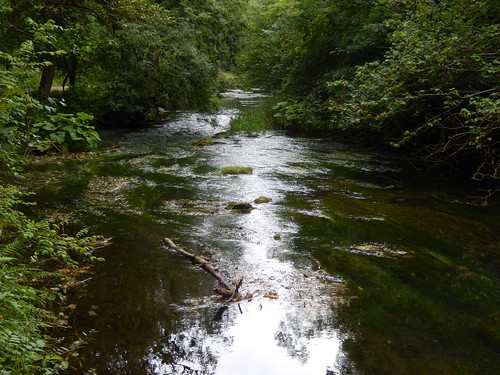 Just when I thought I was done with hills on this day, a series of stone steps lead me up and incline that would, too literally, take my breath away. 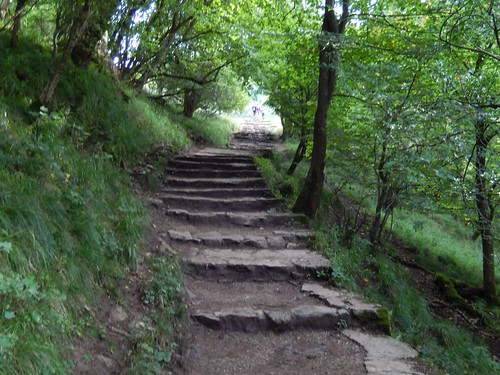 At the top was a convenient space for small groups to sit and rest. 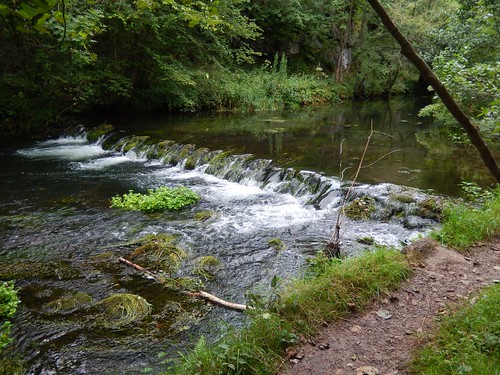 Heading down the other side though, I could feel the pain, fiercely biting in around the lower regions of my knee caps. 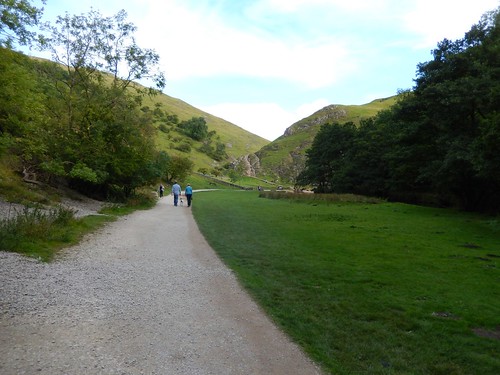 It wasn’t clear at what point in this walk my knees began to hurt or why. It’s never a problem I’ve had at any time in the three-years since I started walking and it’s cropped up again in one knee more recently. 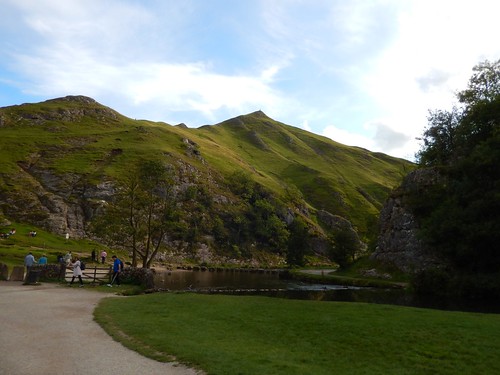 I arrived in Dovedale experiencing a sense of awe with the peaks and landscape ahead of me.

At the same time, I was both sad to be nearing the end of the walk and also physically relieved, for the sake of my knees. 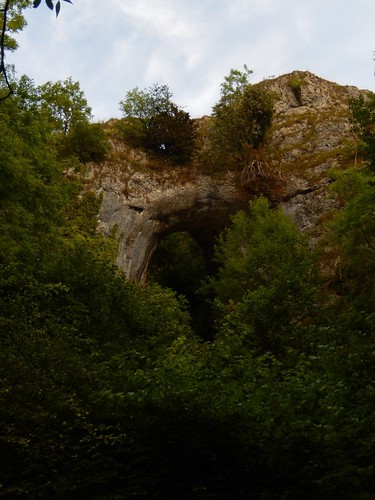 High up to my left, I spotted what’s referred to on the OS map as a ‘natural arch’. For anyone interested in taking a closer look, there’s a narrow path that appears to lead the way up. A group of kids could be heard enjoying themselves from where I stood, down beside the river. 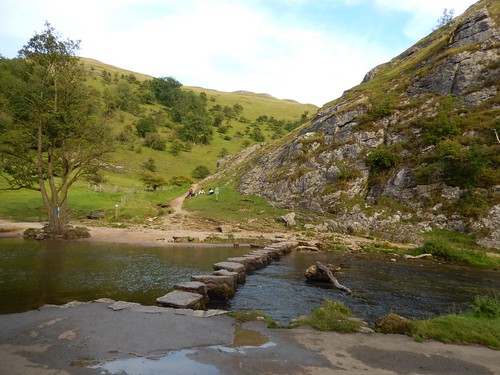 It must be impossible to be able to walk through Dovedale without crossing the large stepping stones over the River Dove. 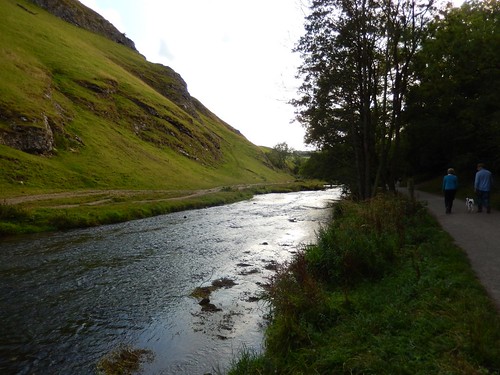 I was a little concerned that I might have been heading off course, as I was, for the first time, now walking with the river on my left. As it would happen though, this robust footpath would develop in to the “road” I mistakenly followed in my search for a free parking spot, earlier in the day – I very, very nearly left my car in a layby that was to be filled by one of the National Trust’s trailers (if you’ve seen them, you’ll know what I mean). 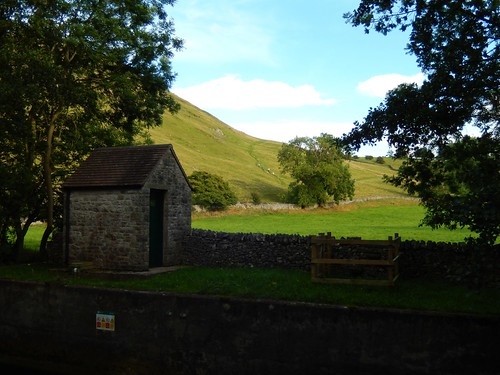 Thank you for reading. I’d also like to say a big thanks to Mike, The Walking Englishman, for again making this route available to all.

To see my complete set of photos from this walk, please click here.