After my third and final night confined to a tent – the longest stretch that I have so far spent camping alone – it was time to pack up and begin the long journey home. Instead of straightforward route from A to B, I decided to make one last stop along the way. 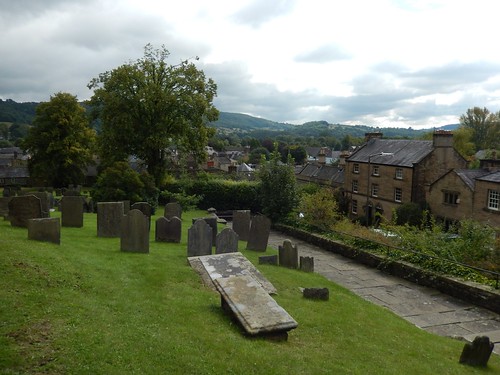 That three-and-a-half-hour drive was inevitable. But while I was up in Derbyshire, I felt it was only right to at least make something more of my morning and that’s when I followed my SatNav on a twenty-minute journey to Bakewell. 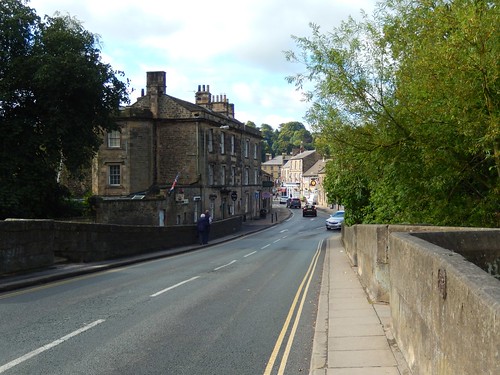 As a name, Bakewell is perhaps most famous for one thing – and we’ll get to that  towards the end! 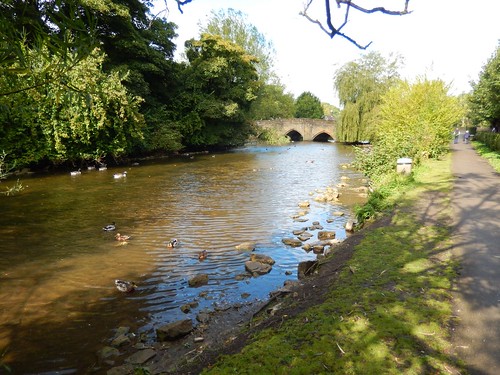 I find that, you can visit some towns and feel very far removed from the countryside… In Bakewell, however, the wide River Wye literally runs through its heart and, from some of the higher points, you can look out across the hills and dales of Derbyshire. 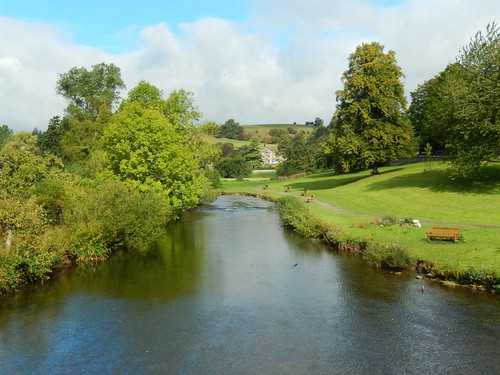 This wondrous spectacle was only the other side of a hedge from the car park I had chosen – where, as I remember, I only payed £2.50 for up to four hours parking… Honestly, I couldn’t leave my car in some city centres for less than an hour, without paying double that amount! 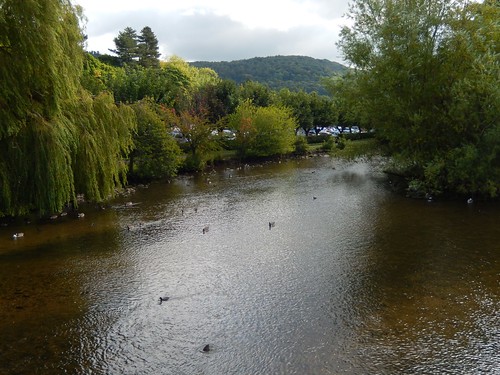 I hadn’t really planned much for my morning here. I was aware of the local museum but not too keen on visiting, given the fact I’d already seen another museum two days earlier and plus, I’d have to spend money to get in. 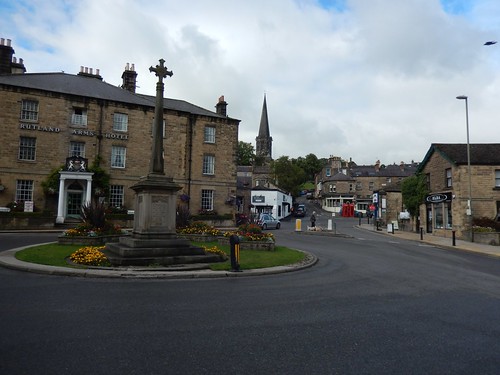 I began by following the main road back in towards the centre of the town, passing a number of shops (including a Cotswold Outdoor with a green shopfront) and food-type places ready to fill you up. It was at a distinct roundabout that I noticed an almighty spire upon All Saints Church, at the head of a hill. 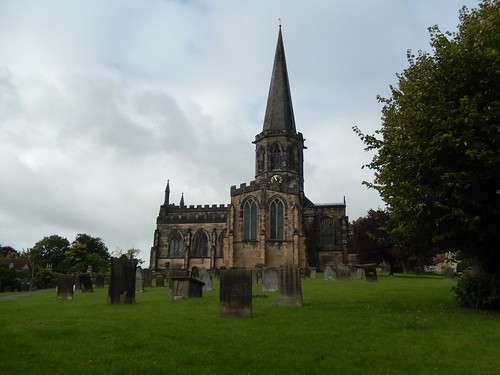 Already, my first port of call was decided. As I made my way around the churchyard and the building’s perimeter (passing signs for a café, somewhere inside), I then found an array of curious and somewhat creepy-looking items surrounding the main entrance to the church: 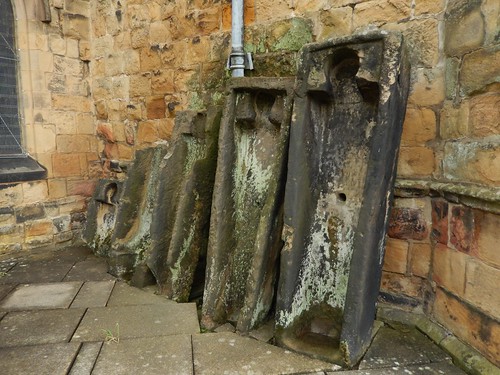 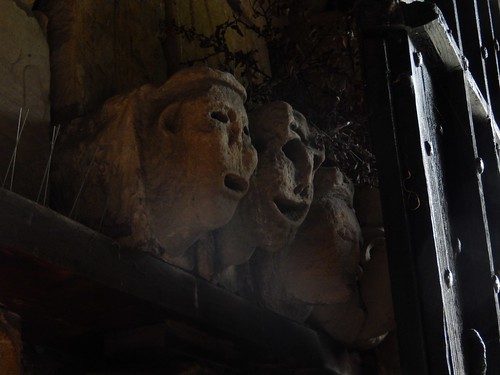 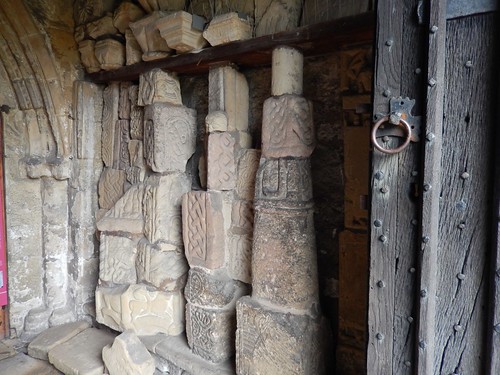 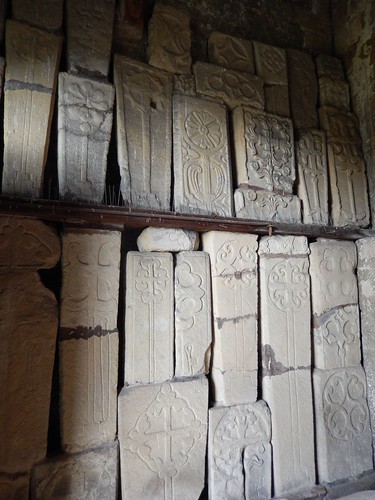 Following steps down inside, as the lone explorer on this Tuesday morning, I felt a sense of a building that is much larger than looks from the other side of these walls: 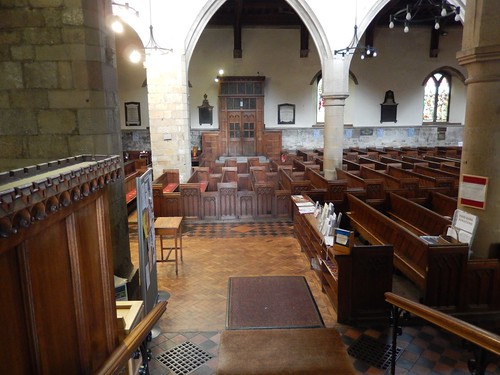 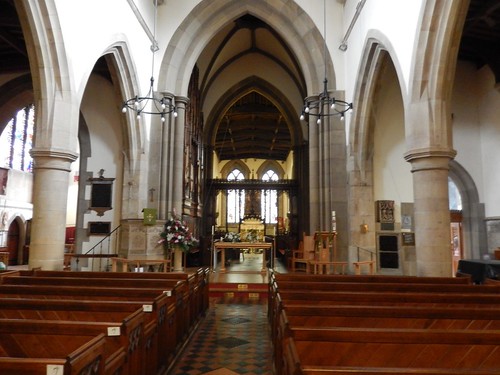 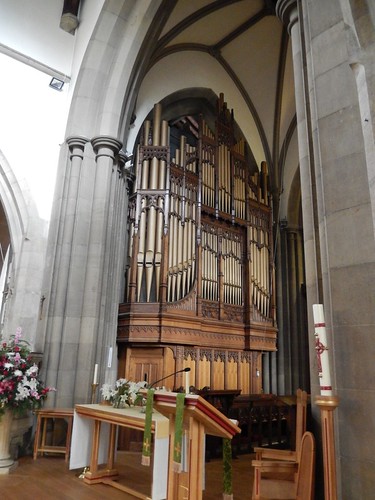 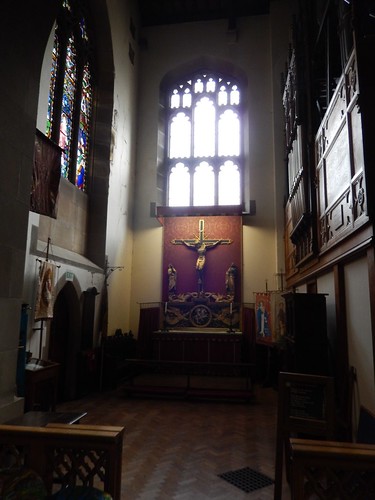 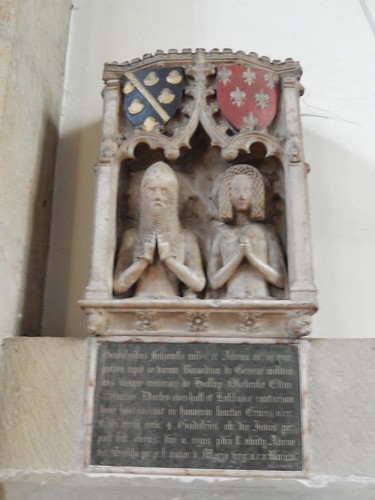 Distant voices from the café beyond one corner could be heard. Other than that, I was free to explore this interior alone. 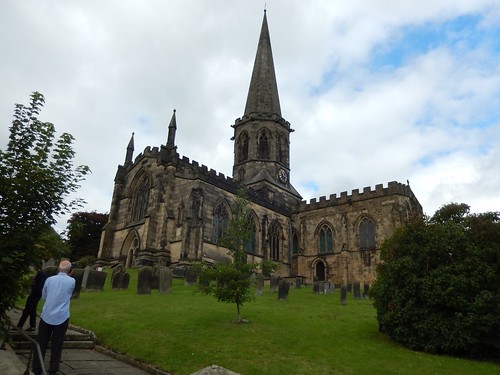 Upon leaving (somewhat desperately in need of a wee), I dropped a few coins in to the donation slot beside the entrance. I’m not a religious man but I’m always grateful to be able to explore such historic sites without being pestered for an entrance fee or unnecessary chit-chat.

I also left my name in the guestbook, as I often do, in the hope that someone might, one day, spot it and recognise me, if not the area I live in…. Once again, I was amazed that so many Dutch people frequently visit these places (perhaps I’m inadvertently following one family on a round-the-UK trek…).

Back in the town at the foot of the hill, I made my way along roads that I’d previously not explored. There were an increasing number of cafés and food outlets, while some stores were contained within a gnarly maze of paved sidestreets. 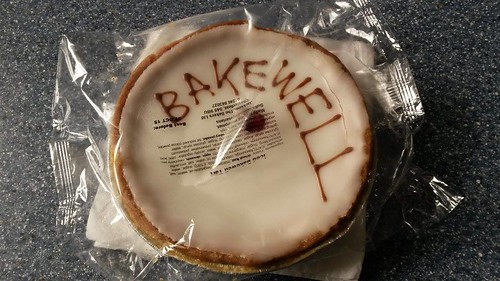 It was inevitible that I would come away with a cherry Bakewell tart… [Apparently, these are more commonly known as Bakewell puddings, close to home…] For one, these very same desserts were available from at least three shop windows that I happened to pass! Also, I was being encouraged by a friend via text… I hadn’t expected to find one that was larger than my face and, as I would discover the next day; was a bit of a challenge for a single person, even with two cups of tea. Still, it was £3.50 well spent. A bit like going to Cornwall and buying a real Cornish pastie, perhaps… 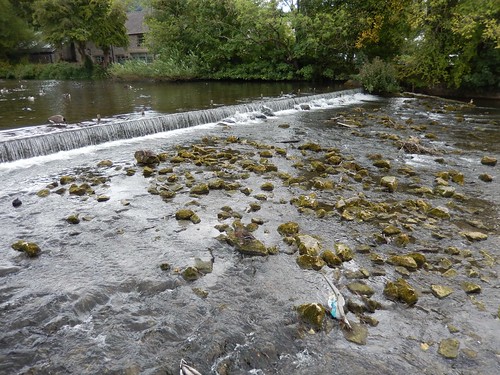 I bought the tart at the same store as where I’d buy a bacon baguette to takeaway, with a cup of tea (I think they were called ‘Sandwich 2 Go’, or something to that effect). It was cooked while I waited and well worth the wait. I found a seat alongside the river and compiled an early lunch with a few leftovers from my camping box. 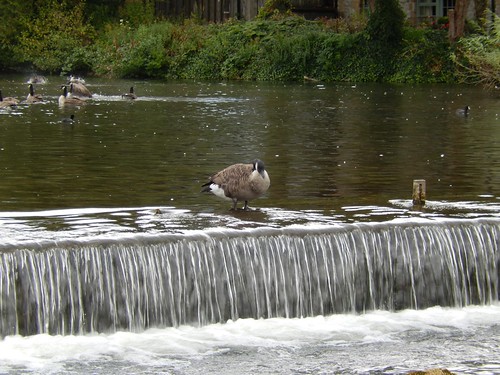 This was, by far, the busiest place to be in Bakewell. 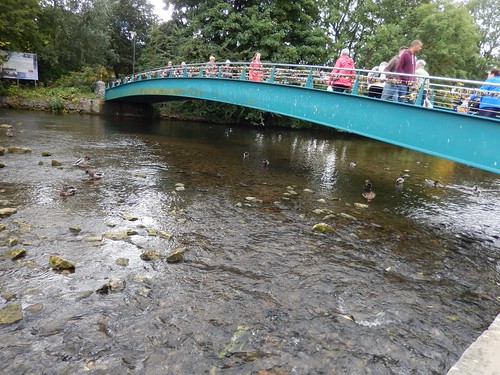 Both sides of this bridge were decorated with an endless collection of padlocks: 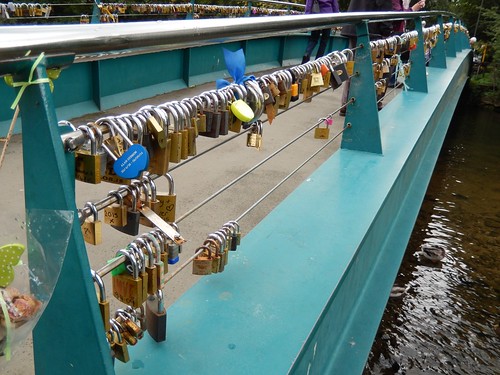 I’ve since learned this is a form of ‘ritual’ carried out by lovers, where they fasten a padlock (bearing each person’s name) to the railings and then each person keeps a key. I’m surprised I hadn’t seen or noticed it anywhere before. 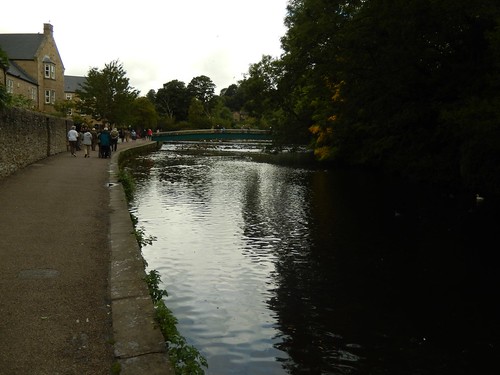 So many people bimbling up and down this stretch of the river, crossing each of the three bridges that I did find… I wonder how many of them were locals, even to the county? 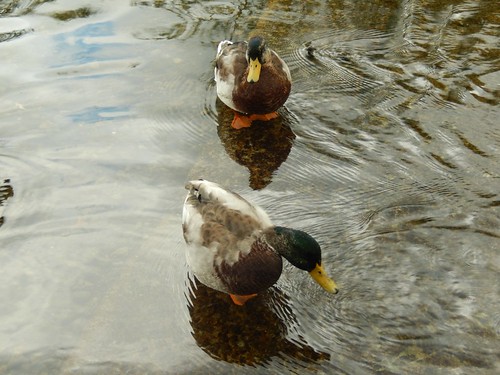 Bakewell’s Secret Garden can be found nearby, yet it’s very hard to draw people away from the water’s edge… Perhaps it’s more of a haven for when too many people are bustling on a Saturday afternoon. 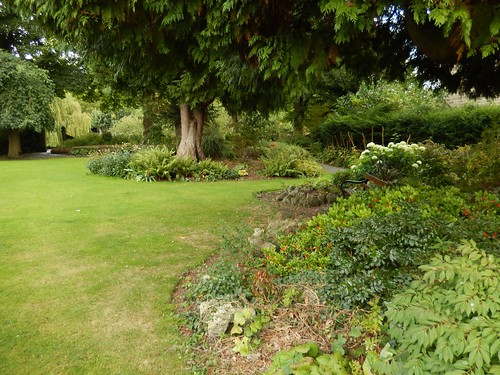 With food now inside of me, I felt somewhat energised towards facing the motorways and a long drive home. 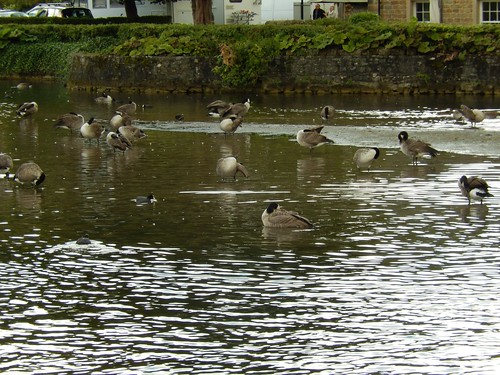 Before leaving Bakewell, I visited what must be a contender for the ‘World’s Smallest Costcutter Store’, as I stopped to refuel my car. From there, my SatNav lead me passed Matlock and on to the M1 motorway, before joining the M42… It seemed like a long way to go at the time but, it meant I could bypass the expected gridlock at Birmingham and instead join the M5 nearby Bromsgrove. 😉 In all, the drive home took about the same time as the rain-soaked drive up to Buxton on day one. 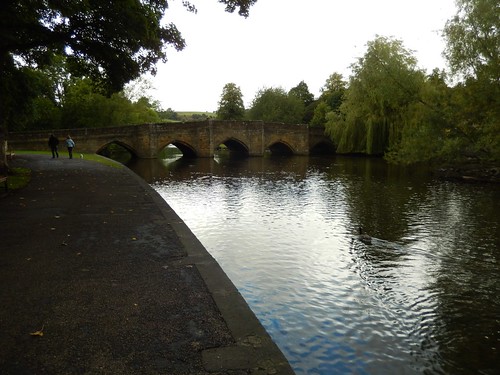 I hope to head back up this way again next year. There’s something overly picturesque and warmly inviting about these towns in Derbyshire. Perhaps I’ll get to see Matlock in 2016.

To see all of my photos from Bakewell, please click hereA.

5 thoughts on “A Morning in Bakewell”