Waunfawr (a name I’m still unsure of how to pronounce) is where we set up for the weekend, in a four-bedroom Rhosgoch Cottage that felt far removed from everyday society. 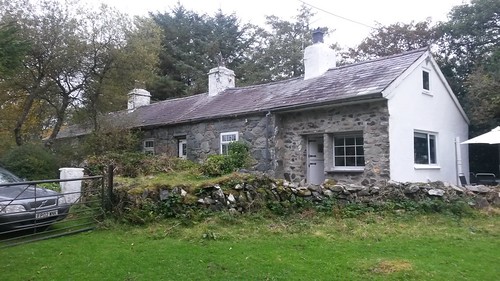 In this post, I’ll look at what we had available on site and within the local area. 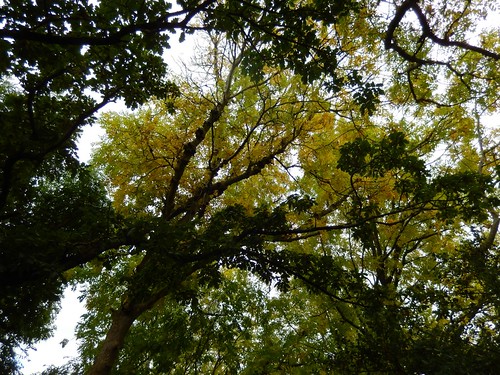 On the afternoon of our arrival (Friday 16th October 2015), once we’d all (partly) unpacked and had something to eat, we decided to go for a stroll, giving our legs a stretch while allowing ourselves to breathe fresh air from the Welsh Highlands. 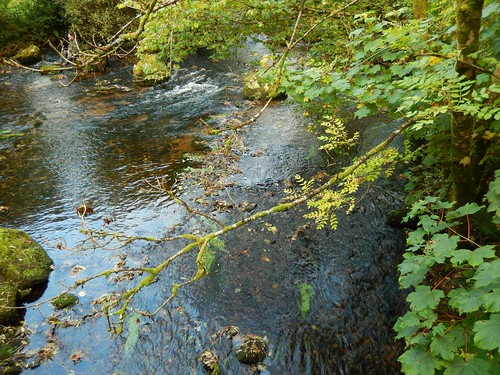 We soon discovered a river only a stone’s throw from a nearby cycle path. A bridleway would’ve taken us much further but we weren’t looking for a big excursion, with a plan to tackle Snowdon the following day. 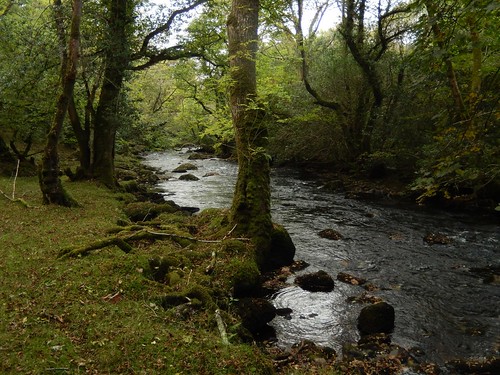 It was quite strange, being somewhere so beautiful and yet so quiet, as if there was no-one else around for miles. 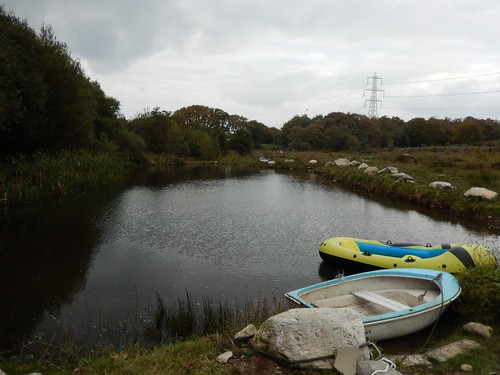 Closer to the cottage, we had access to our own lake for the weekend. It wasn’t any more than knee-deep in places and did have a discomforting smell but with three boats (two of which, were inflatable dinghies), we were all able to enjoy the same time on the water.

Somehow, being the second tallest person in the group, I ended up in the smallest dinghy (not pictured) which was probably best suited to a couple of kids… But it was better than sitting ashore and watching the others have fun. 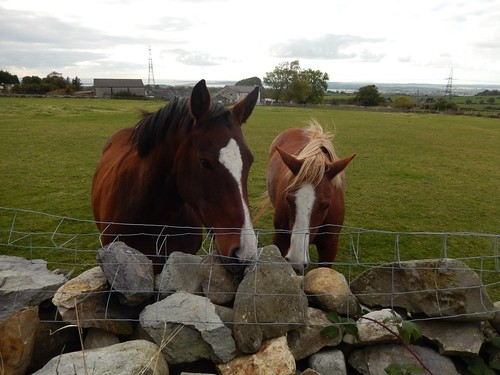 Our cottage was located close to the Snowdonia Riding Centre so, there were a number of horses in the surrounding fields, where we might’ve have expected to find cattle and dozens of sheep. 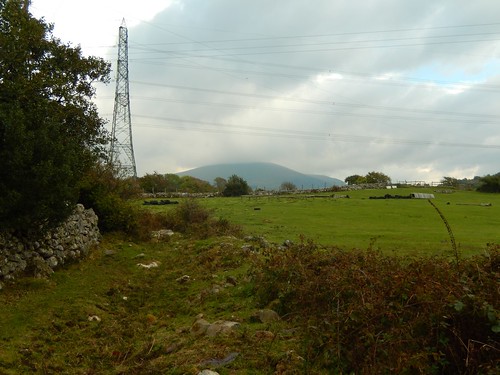 Wherever we walked, to or from the cottage, we always kept the mountains in sight. 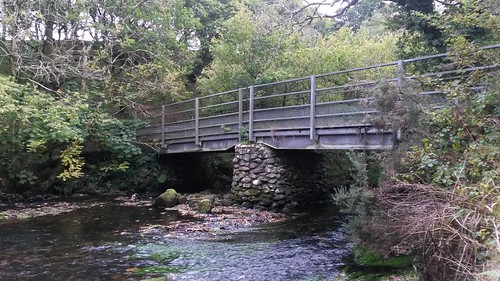 On the day we were finally set to tackle Snowdon (Sunday 18th October 2015), I awoke with an unexpected pounding headache and physically, I did not feel up to tackling my first of the Three Peaks. A big hill on the Mendips, maybe… But Snowdon stands at a good 1,000m tall… Our ascent from Pen-Y-Pass would’ve totalled around 700m. I just wasn’t up for it, with thoughts of having to stop and turn around or navigate amongst potentially ‘hundreds’ of other people… I even looked outside and could see it was cloudy. I had really hoped to be able to climb to the top and look over the country below. 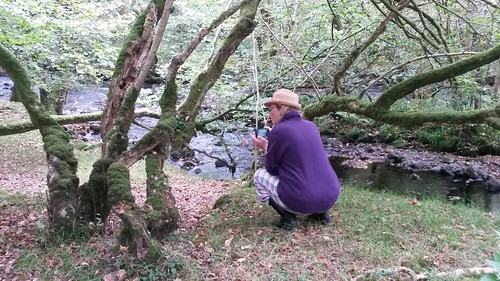 So, I made a tough decision to stay home and look after myself while keeping an eye on Anna, who had been very unfortunately ill the previous day and was still suffering. It would not have been fair at all, had we all come away together on this weekend and then, suddenly, everyone had left her alone for a day… Gareth effectively missed out on the castle and train trip the day before. I felt better knowing that he’d be able to experience something on this day.

After a morning of lazing in bed and feeling a little sorry for ourselves, we managed a small lunch each and set off down to the river for some fresh air. 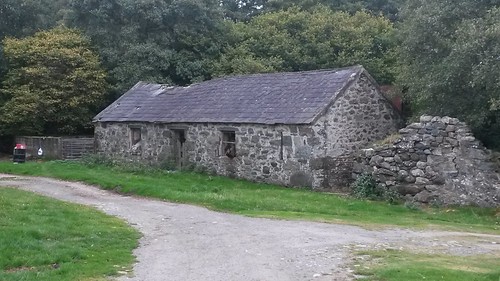 We even trekked a bit further than the distance with the entire group previously and discovered a series of neglected farm buildings. A sure sign that you’re in a rural area, if ever there was one. 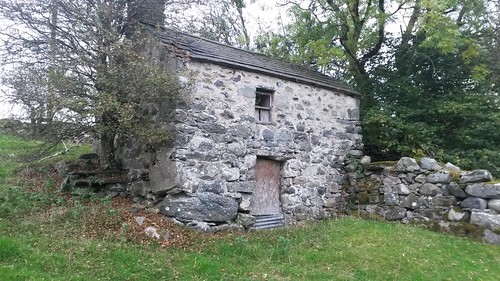 Normally, I’d avoid cycle paths but I think we only saw two, maybe three, cyclists pass by on our walk. It was a clear route for us to continue walking when we weren’t at our best. Along the way, we decided to climb this tree: 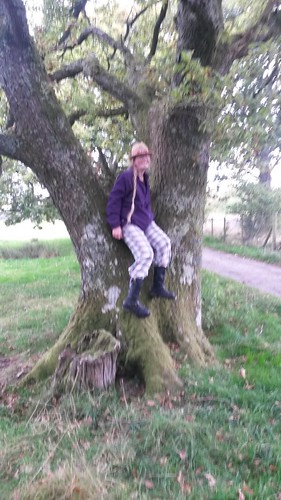 I am still incredibly gutted that this photo of Anna came out so blurry. It’s a peril of using a smart phone in place of a camera. Anna has a lovely smile and to see it at a time where she had felt so bad for feeling so ill across the weekend, well, it was heart-warming to see that she could still enjoy some part of it.

Here’s one Anna took of me, a little higher up: 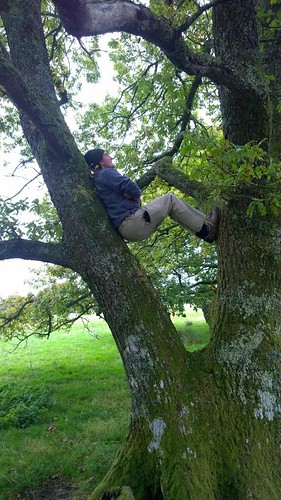 A little further on and the steam train ran past us, near the Tryfan crossing point. 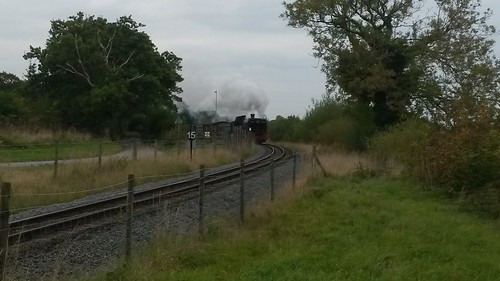 Below, you can see the open-sided carriage I rode in a day earlier: 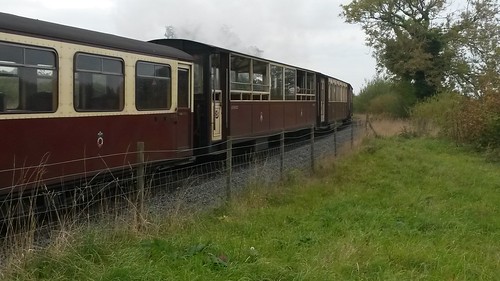 Let’s now take a brief look inside Rhosgoch Cottage, where we stayed for three nights: 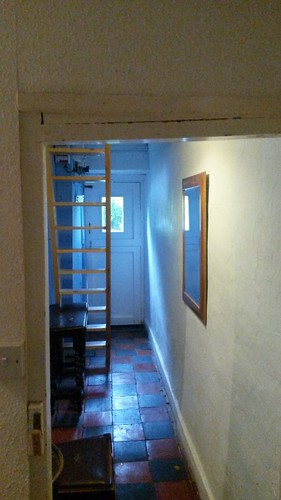 There were two bedrooms on the ground floor with two separate rooms above, each accessed from a different end of the cottage. I’d at first welcomed the thought of sleeping inside a roofspace but after climbing up the ladder in the photo above, I found myself unable to even sit on the floor comfortably beneath the apex, with my 6ft1in of height!

So, I settled for a room in the corner and, above, you can see the view from my door (including the ‘country-style’ door frame…). 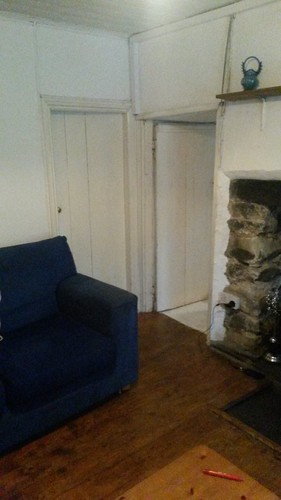 Height was an issue for a few of us over the weekend and I know I wasn’t the only one to hit my head walking to and from the brief hallway that separates the the living room from the bathroom, kitchen and the other upstairs bedroom.

All of the interior doors were of a traditional ledge-and-braced construction… With the exception of the latter, which may explain why a couple of the doors clung tightly to the floor as we tried to close them, without any diagonal support to counteract the force of gravity. 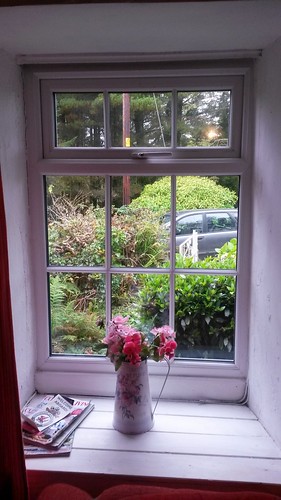 Everything in the property was electric (no oil or gas), as far as I could tell and this is a situation I live with every day. We had storage heaters in a couple of rooms but as we were still in autumn, we were happy to switch on the convection heaters for a few hours each night. 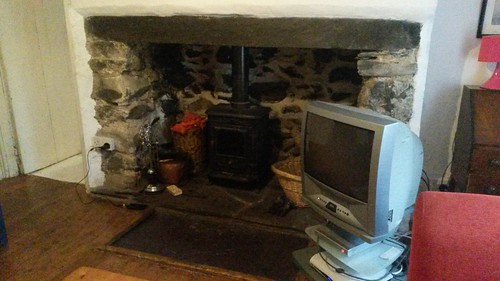 Actually, there was a fire in the living room, with its own supply of kindling and chopped logs, kindly put in place for us by the other (who happens to live next door).

I shouldn’t even mention TV but it came with a basic Sky package (no movie channels, no sport, etc.) and I did bring a stack of DVDs with me, in case we required post-walk entertainment… On the final night, when we did decided to watch one of the films, fate revealed an absence of a remote for the stand-alone DVD player and so we soon put that idea to bed. 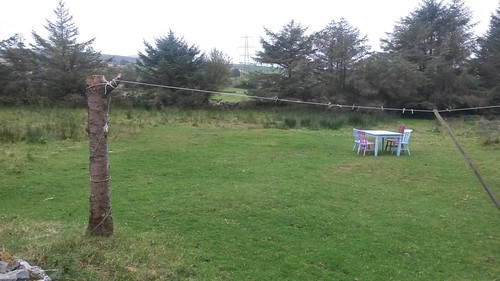 Outside, there was plenty of space for barbecues and things in the summer (as long as you don’t mind the odd sheep passing by). A little further down the track that led us here, we had our own ‘sports field’ as well, with football goals, cricket stumps and a volleyball net all occupying the same space… Which probably works fine, as long you don’t have one group playing football while the batsman’s trying to protect his stumps!

We enjoyed our stay in the cottage and would certainly consider returning here in the summer. Two of us missed Snowdon; two of us missed the castle. But we all enjoyed our time away and looked forward to another shared adventure some day. 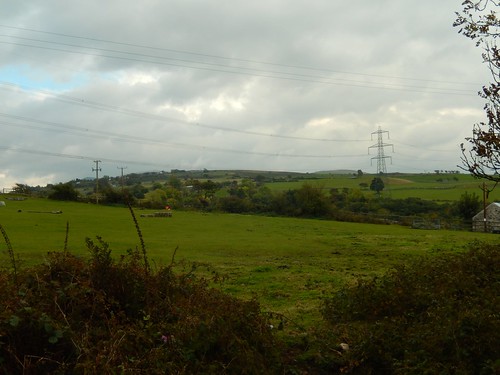 All I have left to share with you is a stop we made after vacating the cottage the next morning – you’ll get to read about that in my next post. 😉