Today, I’ve been and visited my second National Trust property of the month. But I’m saving that for a future series of posts as, right now, I intend to continue writing about my trip to Dyrham Park, nearly a fortnight ago. 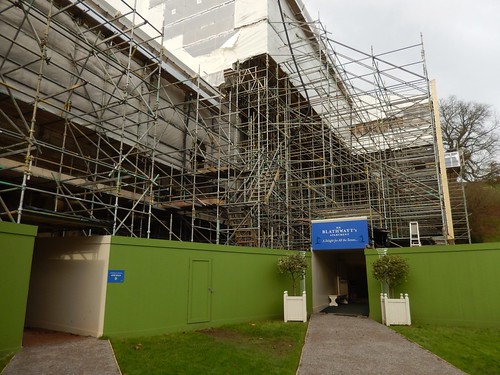 With a gentle walk already completed and having made my way down to the entrance to the house, it was time to look inside. 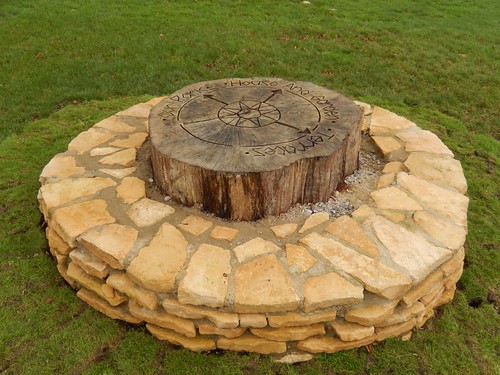 There was no apparent danger of the weather turning wet. While the wind would undoubtedly remain, I was confident that a second walk of the day would be practical later.

I began by entering Mr. Blathwayt’s apartment, beneath a distinct blue sign as little more than scaffolding lurked overhead. 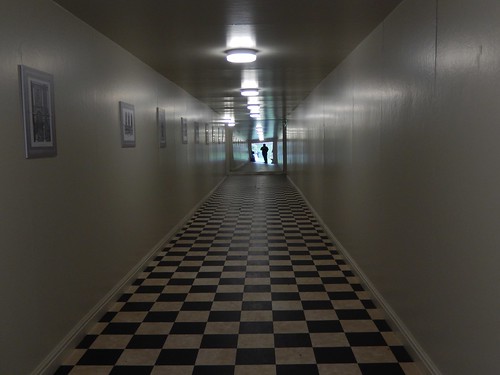 Immediately inside, I was greeted by the distant apparition of my own reflection, matching every move and step I made. It felt very ‘Alice in Wonderland’, with the length of floor covered with chequered tiles. You’re encouraged to slip disposable shoes over your footwear at this point, in order to preserve the cleanliness of the apartment. While my shoes weren’t very dirty or wet, I decided to follow suit – part-attempting the impersonation of a crime scene investigator… 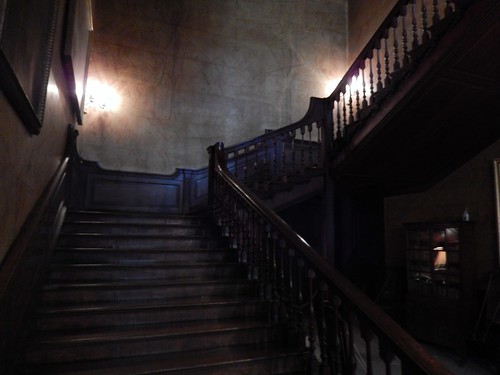 Being an apartment, there aren’t very many rooms you can explore and the space upstairs is off limits (which is quite ironic, considering I’ve just shown you a photo of the staircase). 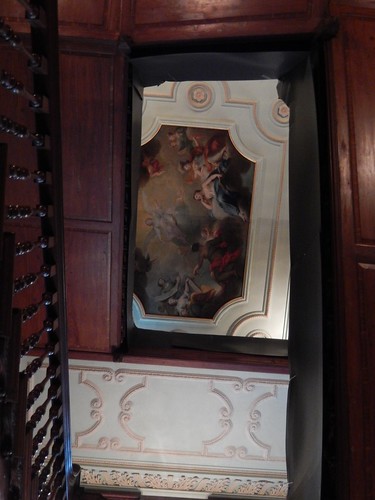 In one room, the smell of spices (including cinnamon, because that’s all I can ever recognise) was impossible to ignore.

Back in the first room you visit (which must’ve been sight), there’s a highly detailed painting across the hallway that gives the impression of an extension to the building beyond… Then, upon reviewing the photo on my laptop, I was surprised to see a dog I couldn’t remember from the day, regardless of the fact dogs are probably prohibited from the interior of the property… 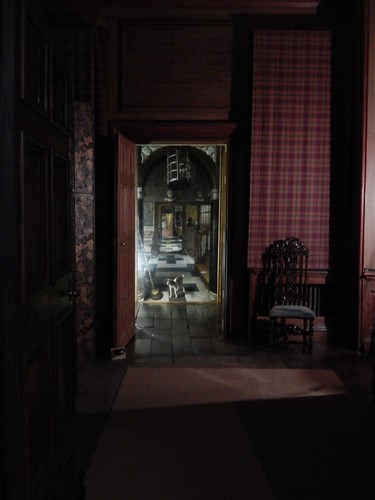 Then, I realised that it was a painting. 🙂

Before ending this short tour, I was asked if I would like some hot chocolate by one of the staff… Being unable to locate any tills or price listings within a fraction of a second, I gratefully received a sample of hot chocolate flavoured with so many spices I’d already forgotten the recipe by the time I stepped outside! But cinnamon was there. I remember that much. 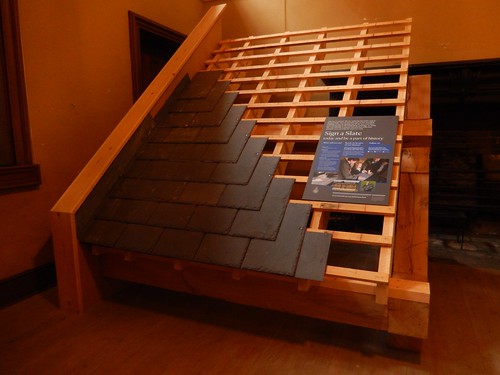 Before heading in to the main house, I explored the other ground floor spaces which, I think, would’ve originally been used for food storage and the like. Inside, I learned about work that was being done to restore the roof and of the National Trust’s ‘Sign A Slate‘ initiative where, for only £5, you can have your name and words chalked on to the new roof as one of the many replacement slates.

Had I been carrying cash with me, I might have looked in to becoming a part of Dyrham Park’s history myself. I don’t know what text I would’ve included beyond my own name but I know this scheme raised several tens of thousands of pounds that went towards the overall costs.

Such a great idea! Sadly, it also came to an end the day after my visit. By which time, the roof was almost complete. 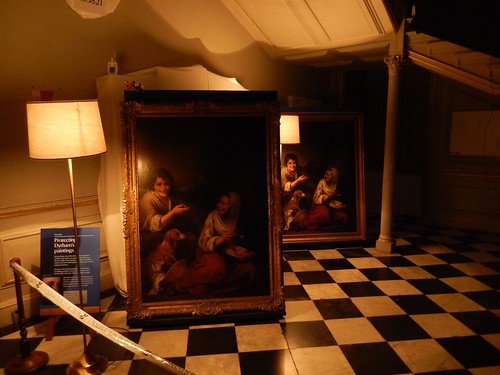 When I visited Dorset’s Kingston Lacy back in July, I read about the work the Trust carries out during the winter months to preserve the interiors of its properties and also to conserve the artwork and valuable items. I witnessed this first-hand at Dyrham Park, where much of the pieces you’d hope to see were concealed beneath dust sheets or restricted beyond lines of tape. 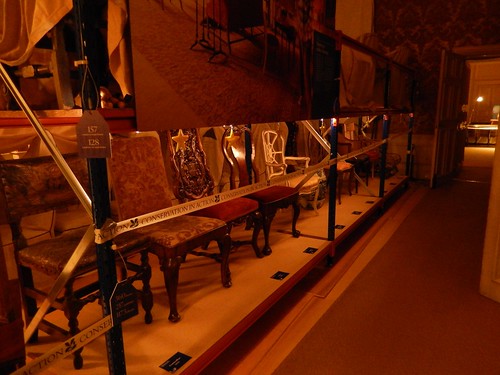 This only encourages me to revisit in a few months’ time. 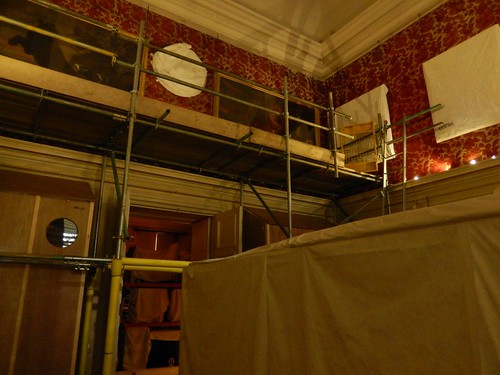 Looking out from inside the final room, you could see the metallic nest of scaffolding, barely allowing a glimmer of the limited daylight to pass through from behind the covering of clouds. 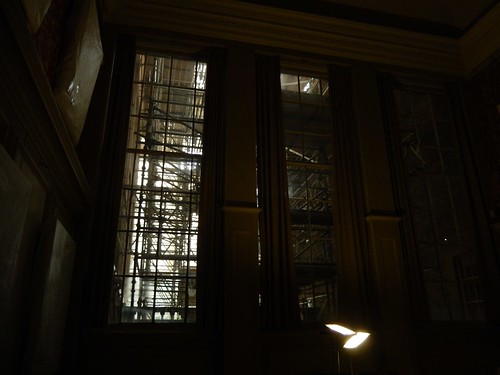 A staff member inside told me of how they had to close the entire park six-days earlier, due to the severity of the winds, which you could hear battering the building as we spoke. It’s not only the risk with regards to the construction work but around the estate, a number of the tall oak trees are ancient and liable to fall, when encouraged. She also encouraged me to revisit and see the rooftop tour (which I will do tomorrow). 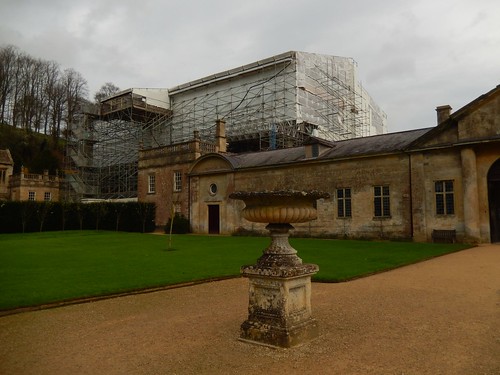 Returning to breaths of fresh air, I headed through the courtyard, passing both the café and National Trust shop to reach the gardens. 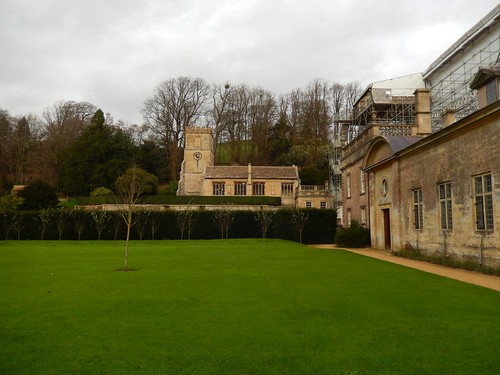 At which point, I turned right and headed to St. Peter’s Church, which is independent to the Trust. 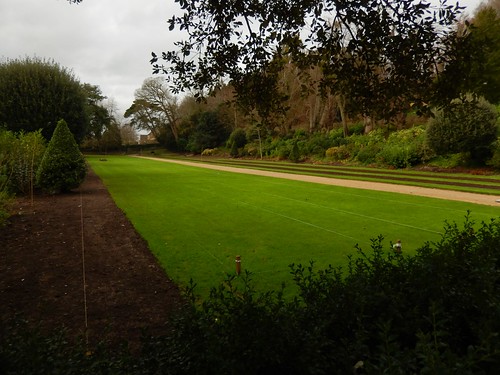 Plans are in development to improve the lawn you see above by filling the space with a series of beds. Again, this is another reason to revisit and signifies an intent not only to maintain what’s within a property but to improve upon where applicable. 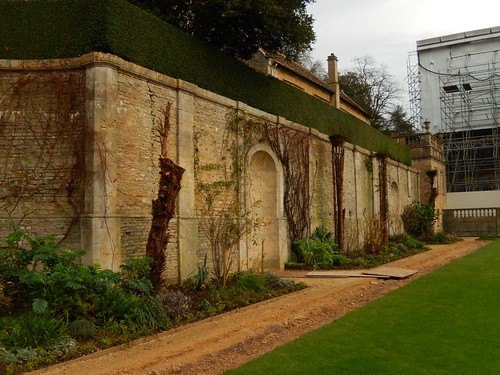 As with many properties I have visited within the last two years, this is a church you are free to explore without interruption. A respected space that also respects and appreciates your right to roam. 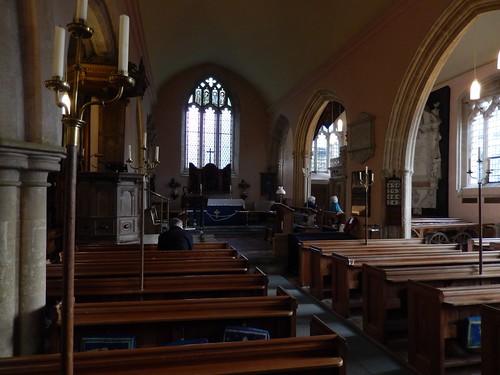 I noticed an elaborate tomb in one corner: 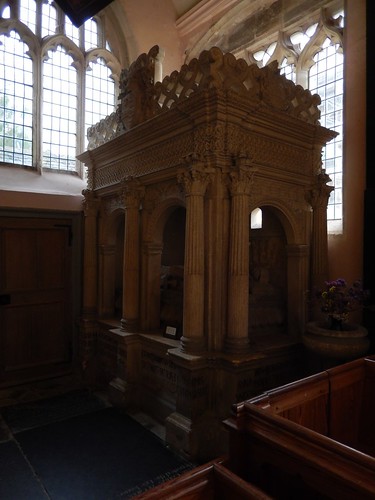 Closer to the entrance, I looked over this wooden contraption, which is know as a bier: 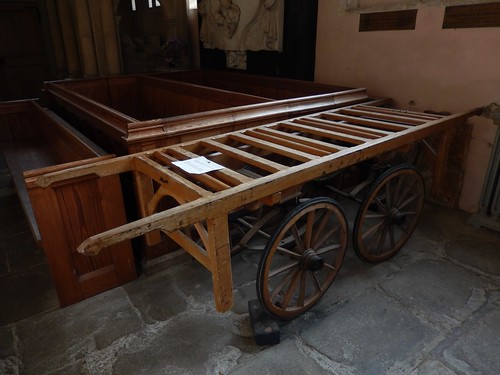 It was apparently used to transport corpses but even this reconstruction model appeared to be made from locally grown ash, which I found humbling. 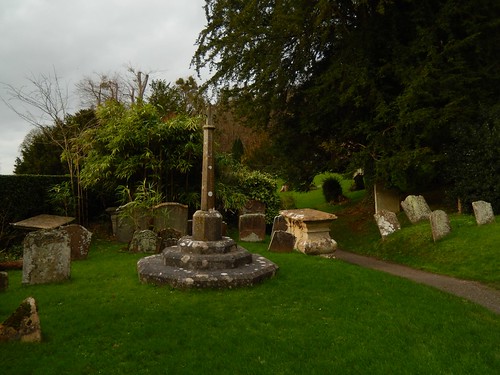 Returning to the outdoors once more, I think I’ll bring Part 2 to a close here, with the promise that my third (if not final) instalment will follow very soon.