Here we are in 2016! I hope that everyone has welcomed in this new year in a safe and responsible manner… 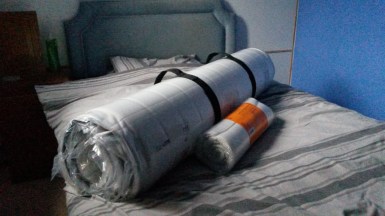 A few days before Christmas, I made yet another journey to Ikea (my third, I believe, in as many fortnights) and treated myself to a brand-new mattress.

I’ve had sleep problems for years and it doesn’t get any easier with 7am starts for work. Over the past year, I’d begun to notice a pain in my lower back emerging as I would wake each morning and, noticing the sag in my old sprung mattress, I simply put two and two together – that mattress was given to me, with the base, in 2011 and was second-hand at the time, although barely used.

Switching the mattress may not totally relieve me of my sleep-deprivation but it should at least erase that physical pain.

So, I bought the following items:

I liked the idea of a foam mattress, although I now wonder whether I should’ve spent an extra £60 to get a mattress with memory foam… At the time of my decision, I settled on the Malvik model as it was neither the cheapest or most expensive. They say you should replace your mattress every eight years – even if this one was to survive only half that time, I see it as a good investment.

Since I was paying a certain amount of money for this, I decided it might be worth looking after it with a protective sheet – this was one of the more expensive ones but then, I’d expect a sheet to outlast a mattress.

Another reason I liked these is that they come in a rolled up state that allows you to quite easily carry them to your car, load them up and get it home (no van or special delivery required). I don’t think it’s possible to re-roll them (during a house move, say) without causing some damage. 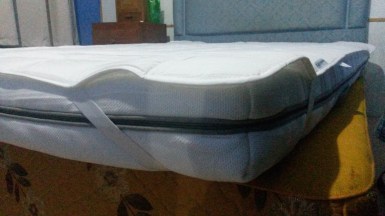 Having slept on this now for the last few days, I can say that I’m pleased it doesn’t squeak like a sprung mattress and it has a way or warming your body. But I am now experiencing back pains a bit higher up, each time I attempt to sleep on my back. Sleeping on my side is not so uncomfortable and the foam does not sag like my old mattress.

These new pains may be a result of ‘settling in’… It could even mean I need to change my pillow arrangement. Each mattress requires three-to-four days once it’s been unrolled so that it can rise and settle in to its true shape. During this time, I slept on my settee with much discomfort and many disturbances, which may also be a contributing factor. At least I was able to struggle through this period over Christmas, when I wasn’t required to wake up at 5.30 every morning.

I’ve no idea as to whether a memory foam mattress would be an improvement but I am currently considering adding a mattress topper, if my back doesn’t improve this week. This new mattress (140mm) is considerably thinner than my former mattress (200m?) and so there’s room for a good 40mm – 80mm extra on top.

One final conundrum was to decide upon how to get a double mattress in to the back of an estate care and I came up with a simple solution: 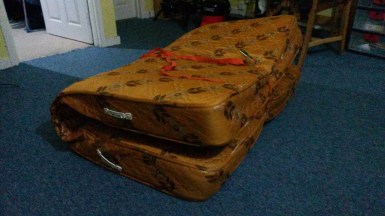 It folded a lot easier than I’d expected, with all those springs inside, which again suggested that it may’ve been past its time.

For anyone who might be wondering; I love the idea of replacing the sprung bed base as well and, of course, it would have to be with something wooden that I have made myself… One day, I hope.