My final walk of 2015 was a coastal one, although not part the coastal walk I’ve been doing with a friend. I had hoped to do a long walk on New Year’s Eve – much like last year, when I ended up walking twenty-one miles from and to my doorstep. But the wet weather this week has been somewhat relentless and, on the driest day we’ve had this past week, I lost a couple of hours having new tyres fitted to my car. 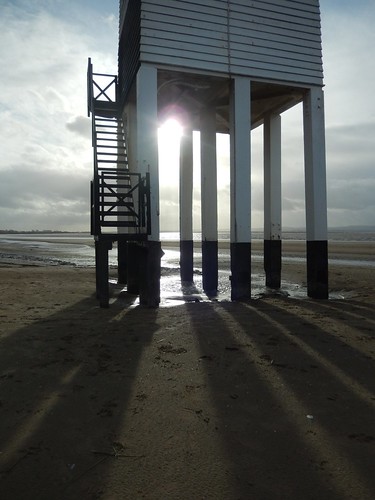 Reluctant to sit indoors wishing the time away, I chose a fairly ‘easy’ short walk down at Burnham-on-Sea. Perhaps only for a couple of hours until lunch, before further rain was forecast to fall.

Today, I’m faced with a similar predicament… Cautiously waiting for a forecast break around lunchtime, where I may be able to take advantage with another short walk. 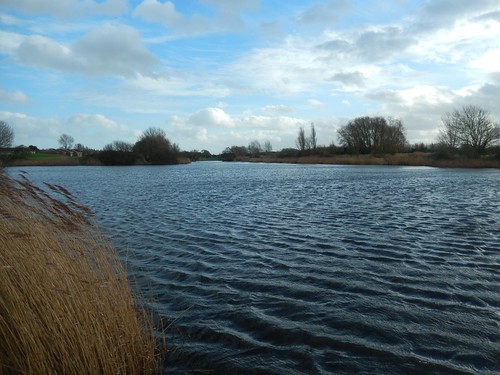 Like some of my other walks in this part of the world, this one began at Apex Park, near Highbridge, which has free parking until dusk and is only a short walk from the seafront, if you know where you’re going. 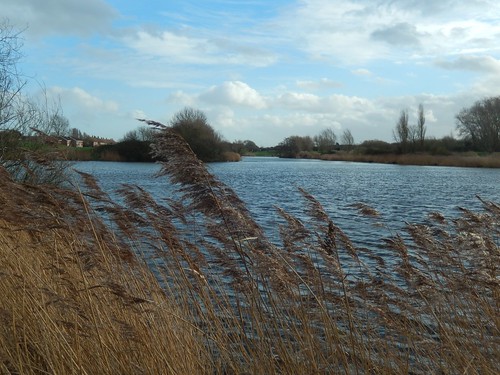 Already, the windy was quite strong here. Although, the car park was still about half-full. 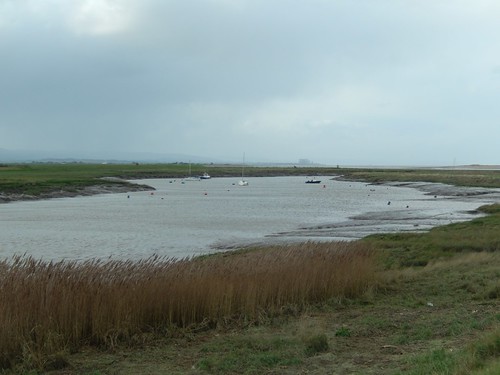 From here, I quickly join the River Brue to head west – turning east would be the next point on the coastal walk, which we hope to resume as soon as weather will allow. 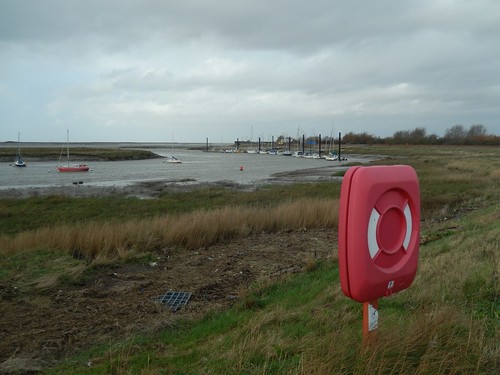 To be quite honest with you, I’d never seen so much water in this river near its estuary. I’m used to see boats moored up in the muddy banks, with little more than a large puddle down beneath them.

As heavy rain remains persistent, I wonder, for how much longer can those banks hold on? 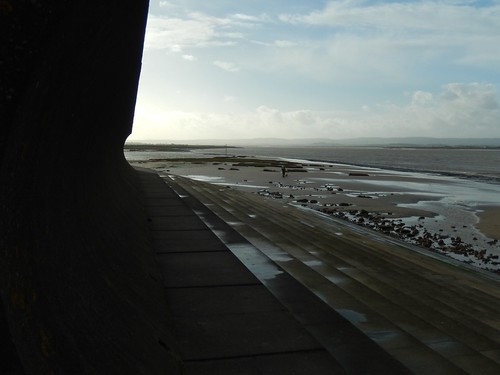 Stepping down between the sea wall to set foot on the beach at Burnham, there was no escaping from those winds blowing from the south-west. At least the terrain was easy from here on, with no unexpected climbs or drops to follow. 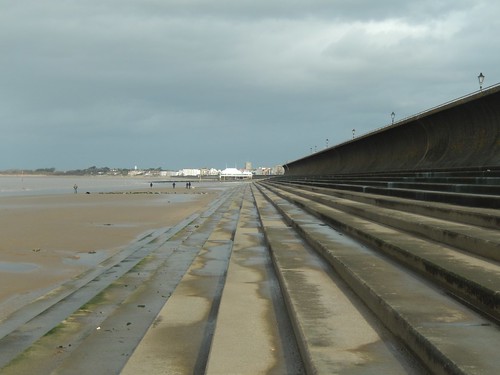 For the first portion of this walk, heading north along the coastline, I stayed close to the sea wall along higher ground, far away from the water. 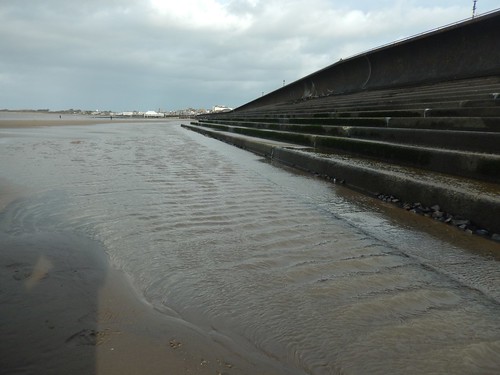 Where puddles and streams still remained. 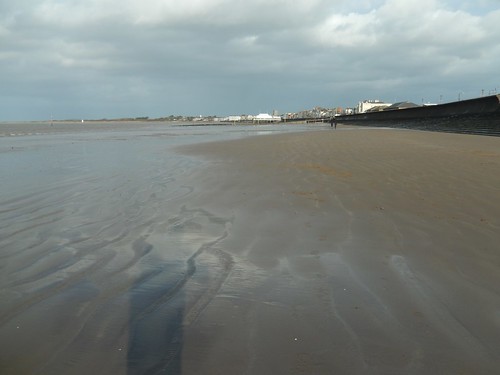 But as wet as the sand here may look, it was solid and reassuring underfoot. So tightly compacted, my boots didn’t leave even much of a footprint. A contrast to the loose, light and dustiness of the summer months. 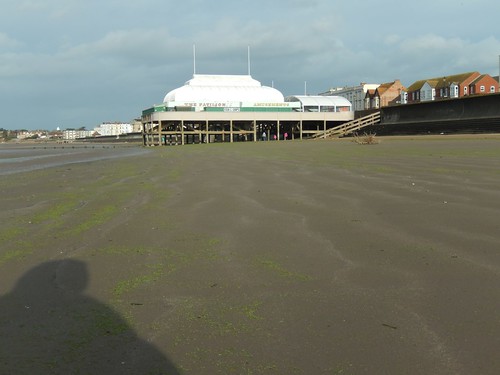 As I neared the pier or pavilion – of which, I’ve heard, there are now plans to extend it – I noticed a dusting of green stuff [Moss? Lichen?] all over the sand. 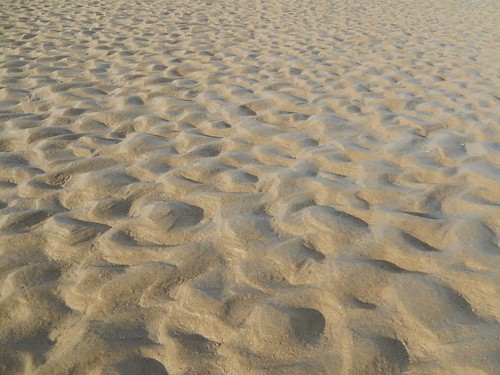 Walking closer to the tide now and these patterns within the sand were mesmerising. It’s hard for me to begin to understand how the water could’ve created this. 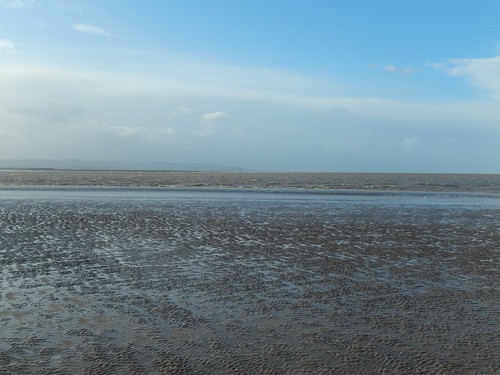 With signs for ‘soft sand’ and ‘sinking mud’ dotted along the coast here, even as far north as Weston, I’m always wary of walking too close to the waves. When I see a dog walker or fisherman out there, it does offer reassurance.

I was about halfway to Berrow beach by now with its driftwood. Although, I didn’t intend to walk that far. 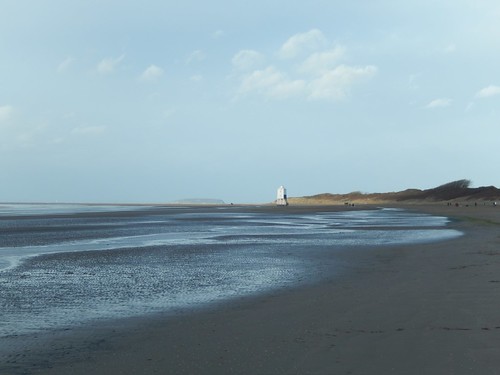 I continued as far as the infamous wooden lighthouse on stilts before turning around; ever conscious of the time and the forecast change in conditions to occur around lunchtime… I was also conscious of the fact I would need to stop for lunch soon and, ideally, sheltered from the wind and any potential storm. 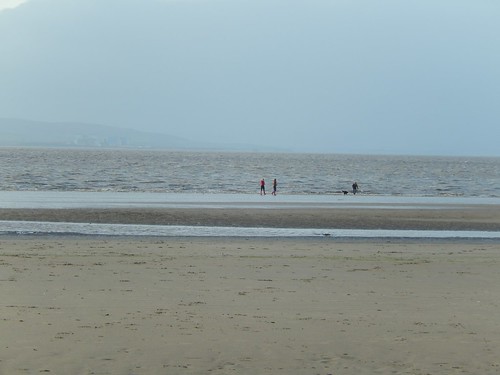 My return path followed the tide very closely this time. From a distance, I could still look inland to spy Captain Jack Sparrow up to his usual tricks in someone’s back garden. 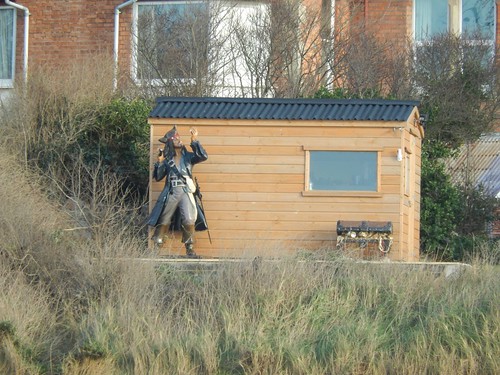 To the north,  looked on towards Brean Down – possibly not the best place to be on a day of wind and rain… 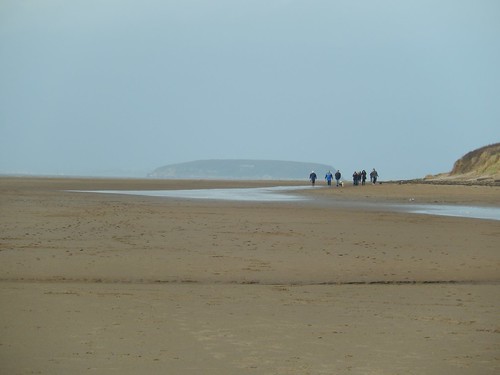 Looking inland once again, I could just see the former lighthouse that now provides a distinguished home. 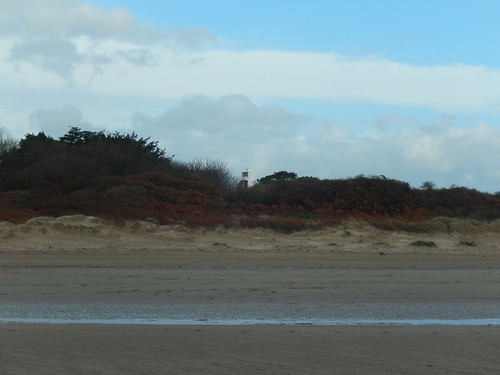 Walking close alongside the sea, the wind transformed in to something else. 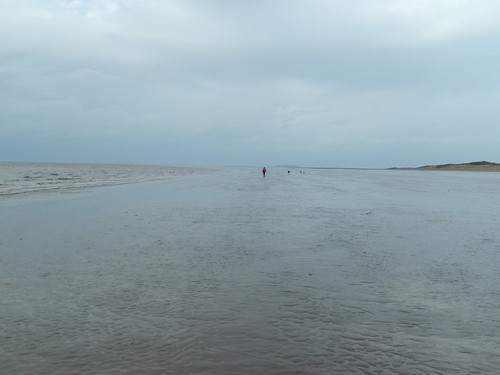 There was no escape from the breeze, here. Looking back towards the town and it’s sea wall, life appeared to continue in silence. 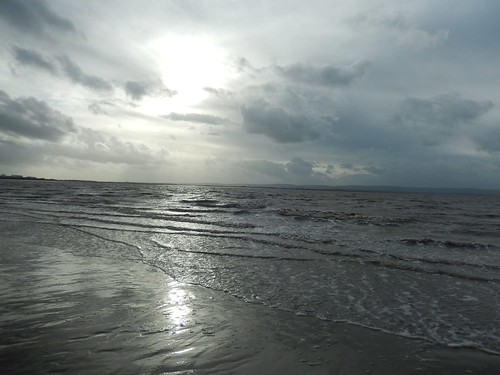 My perceptions were insulated by this force of nature. 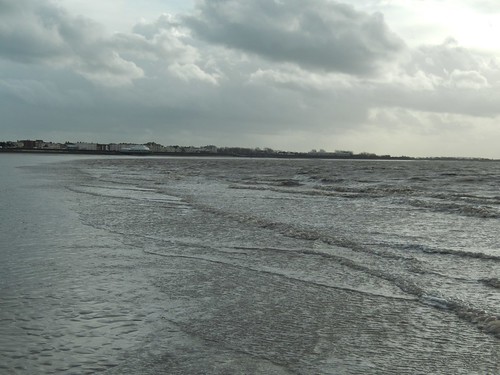 It was hard to accurately predict at what point the forecast rain would be arriving. I’d donned my waterproof coast in any case and received a few drops, nothing more, as I first reached the beach. Every so often, I’d turn back to see dark clouds looming but they would just as soon be off on their way. 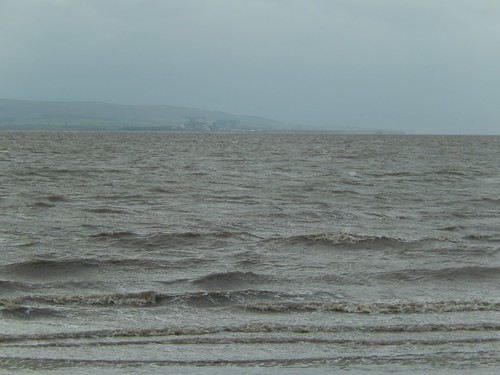 As my return route led me closer to the sea wall, I turned inland from the water and the brutal wind diminished somewhat, the further I trekked across the sand. 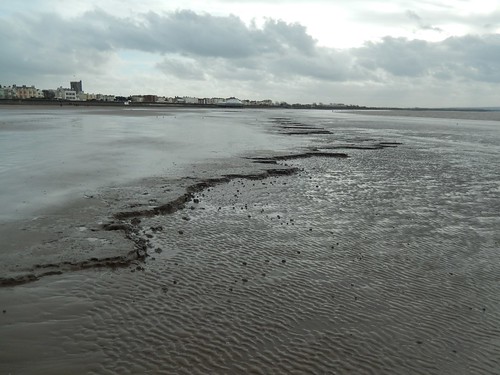 There were some ‘cliff-like’ stretches of sand that fascinated me – again, how does water create this? With my feet, I tested their durability, only to find my soles immediately sink nearly 2in/50mm. 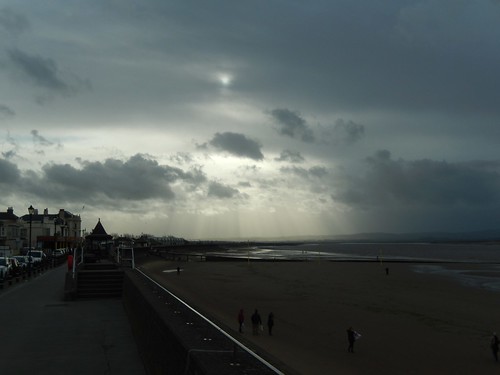 I moved up on to the promenade with thoughts of stopping for fish and chips. I eventually took shelter inside one of the structures further along, sticking to my cheaper packed sandwiches, knowing time spent waiting for food to be cooked would allow those dark clouds to draw ever closer. 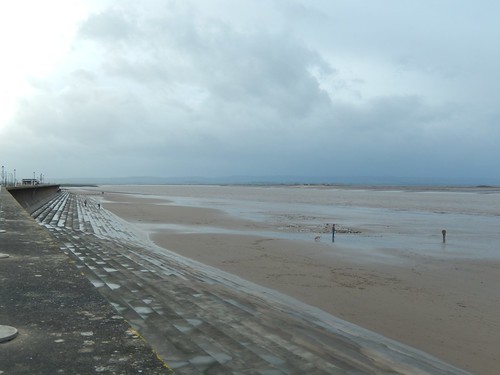 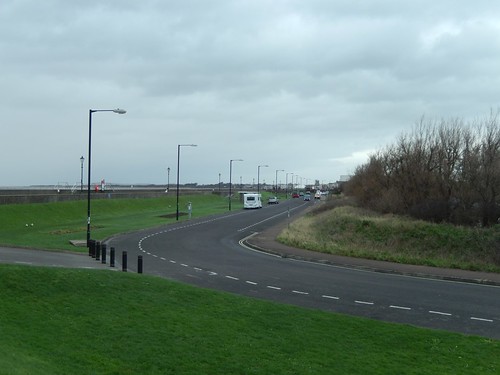 It wasn’t until I was back walking alongside the Brue – maybe halfway between the beach and Apex Park – that the cold rain arrived; each icy drop adding a chill to the right side of my face around my eye. 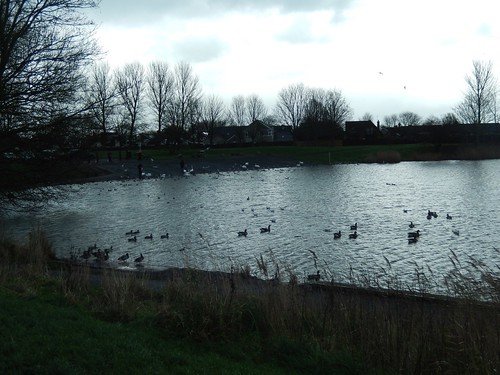 This continued in to and throughout my drive home. As I returned to the park, half the cars from earlier had departed and there were a few dog walkers who’d been caught out in the showers. Ducks didn’t seem to mind…

I enjoyed the walk regardless and I think the moral here is that you can enjoy time outdoors, regardless of the weather. This is why waterproofs were invented. It may only be a question of whether or not you’re prepared.