It was one-day before the official Winter Solstice date and, with work otherwise interfering, this was best chance of repeating the feat of a long walk, like a did across the Mendips, one year earlier. 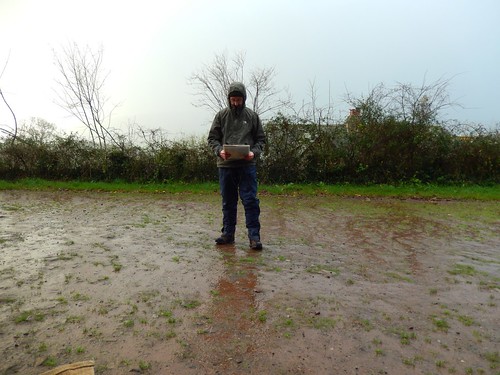 I felt inspired to head further south and deeper in to Somerset. Having been to the Quantocks only weeks earlier, I felt compelled to head further west to Selworthy (just past Minehead) and tackle a walk I had intended to do back in June, which involves a few miles of the South West Coast Path. 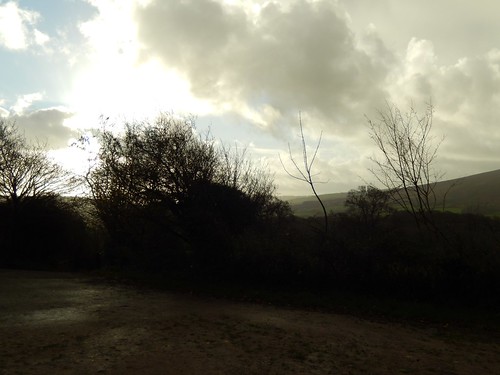 One of the reasons I picked Selworthy, as opposed to the actual coastal path, was because I knew that you could park there for free and I wasn’t aware of a place in Minehead where I could’ve parked without paying. Blue skies had blessed me for the ninety-minute drive down but not sooner had I got out of my car and put my boots on, grey clouds came from nowhere [the west, actually] and it began to pour. 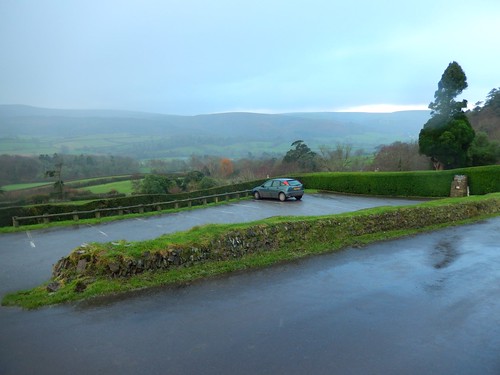 There’s a main car park right opposite the church in Selworthy, where I noticed a small sign stating that it was reserved for church-goers on a Sunday morning. Slightly up the road and left is the large overflow car park (although not highlighted on OS maps), at the foot of a path leading up to Selworthy Beacon. There is no fee and no meter at either spots but instead, a ‘£1 suggested donation’ stone pillar that can be found across Exmoor in places like Dunkery Beacon. 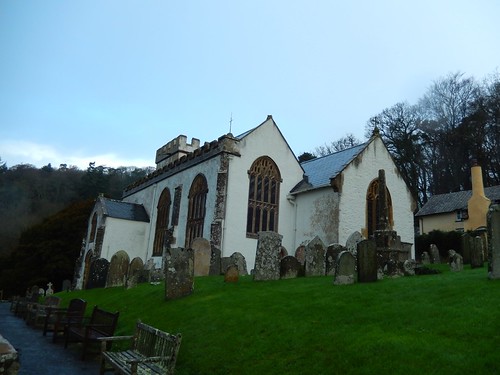 My first destination was Minehead, where I would later join the SWCP and this walk began following a narrow country lane for the first few hundred metres. 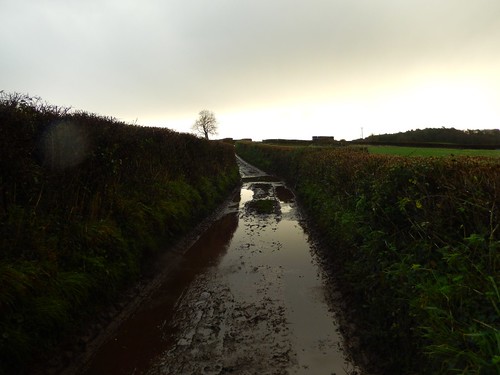 For this first part of the walk, the rain was almost relentless with its consistency, hence why I’m wrapped in full waterproofs at the top of this page. 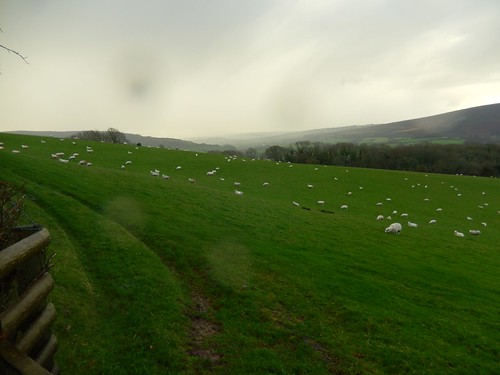 I skirted along the northern edge of Little Hadon Plantation and across a couple of fields to reach Bratton. 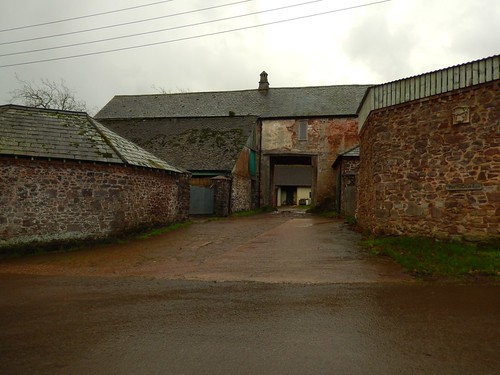 This is Bratton Court. You’ll notice it in italics on an OS map but it just looked like a simple farmyard from the outside. I was half expecting welcome signs and opening hours to be on display but perhaps it is a private property. 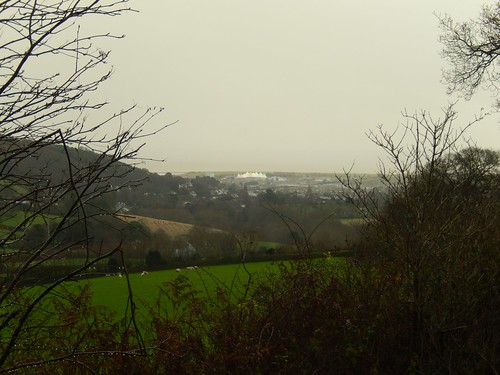 Following another lane in to Bratton, I could clearly see Minehead in the distance with the distinctive Butlins’ holiday park. 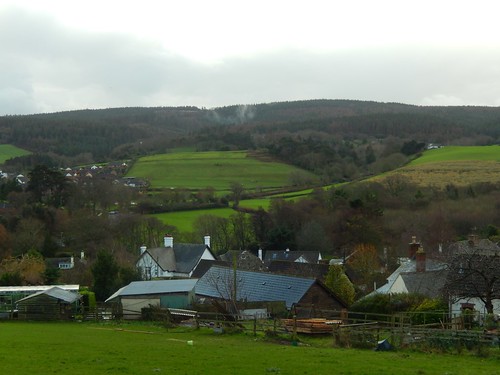 Looking further south to Exmoor, I could see smoke rising from within the woods of Timberscombe and this photo is just one example of several that I could see. My initial thought was fire and maybe some kind of ‘crop control’ (as they do on heathland)… Someone has since suggested it could be dust, as the same occurrence happens near them when it rains heavily. 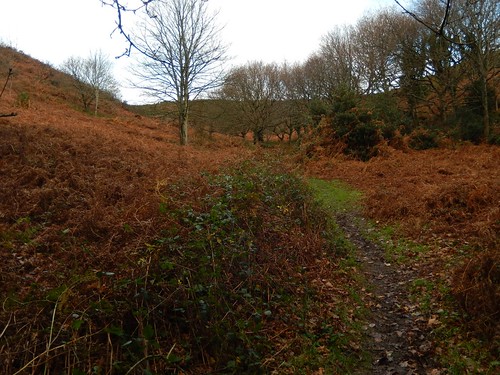 Again on the OS map, I noticed a reservoir was highlighted, with no apparent body of water in sight. So, after finding the correct path that left the houses behind (and not before aimlessly wandering across private fields…) I began to climb in pursuit of my investigation. 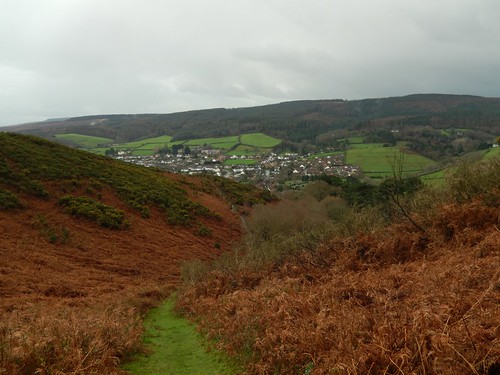 It was hard work, especially when you’re effectively wearing a second layer with waterproofs and not forgetting the mud beneath my feet. I made sure to turn around and admire the view, each time I ran short of breath. 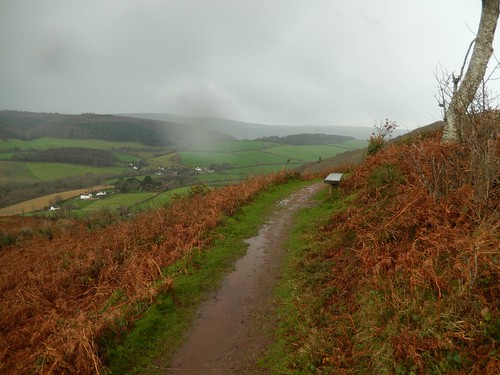 By the time I reached this path contouring the hillside, I’d forgotten all about the reservoir (which I now assume must be underground, like the one in nearby Dunster) and was more inclined to make good use of that bench and have something to eat… But for the persistent rain.

There was still a number of metres to go before I would reach the highest point and, feeling the fatigue so early in to this walk, I decided to take a more ‘gradual’ climb to the top, along Wood Combe. I passed a couple of fellow adventurers heading in the opposite direction here, neither of whom were overly satisfied with the weather (you can just see them in the next photo). 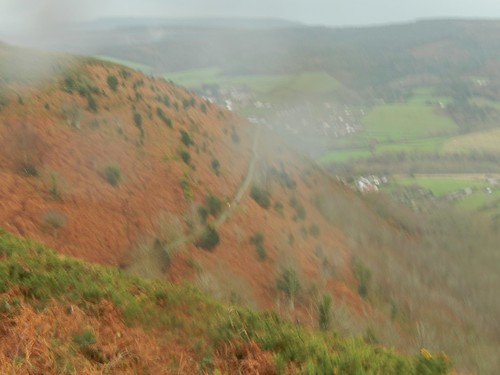 I took this photo as I neared the top. Walking along the edge of that hill had been exciting. I don’t have a photo that captures it as well as the video I previously released but there was a steep drop to my left… It felt like walking deep within Exmoor and yet, I was so close to the coast. 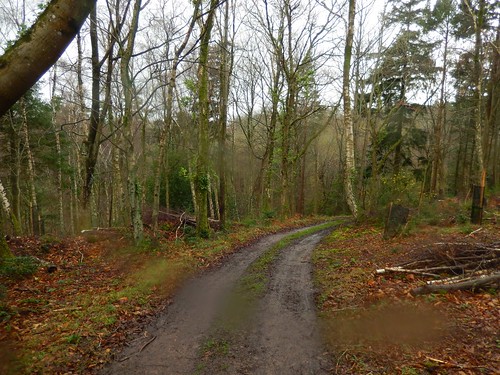 As I reached the road, I was hoping to be able to see some of the coastline but it remained out of sight, with only greyness in view. So, I crossed over and in to Moor Wood, following a distinct bridleway that would soon lead me on a winding downhill path. 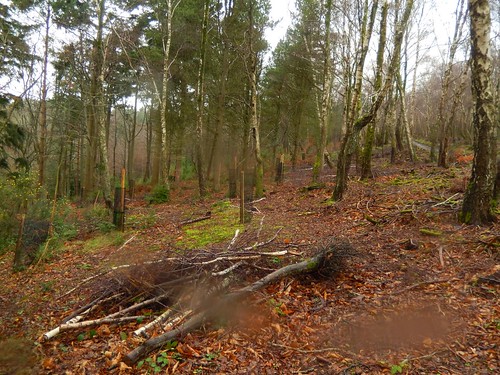 Having passed perhaps half-a-dozen people so far on this walk, most of whom were dog walkers, I found myself walking alone again, down through these woods. 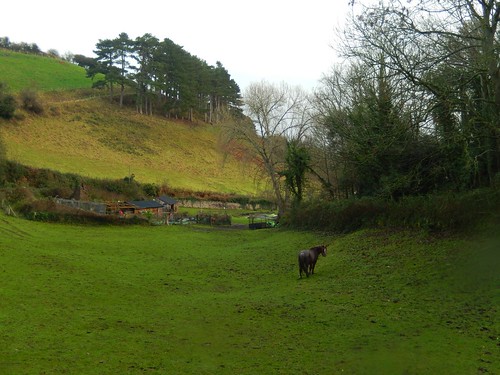 Next up was Higher Town – which, to me, sounds like a place that could’ve existed in the world of Trumpton or Camberwick Green! 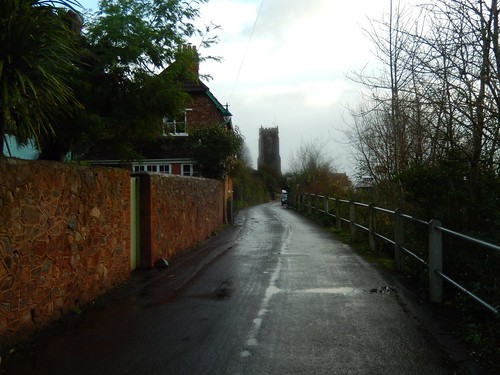 Between houses and beyond thatched roofs, I could see Exmoor again, before reaching the church: 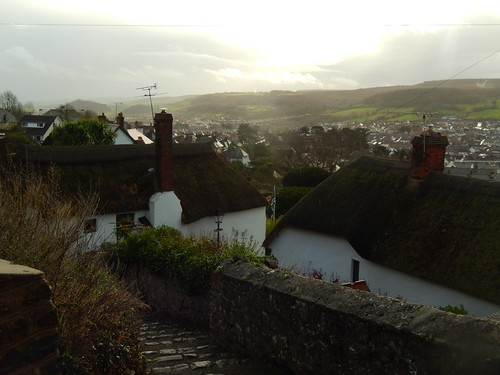 A few cars drove past me but life otherwise seemed so dormant, here. So often, I walked past churches on a Sunday morning walk and it’s as if nothing’s going on inside. 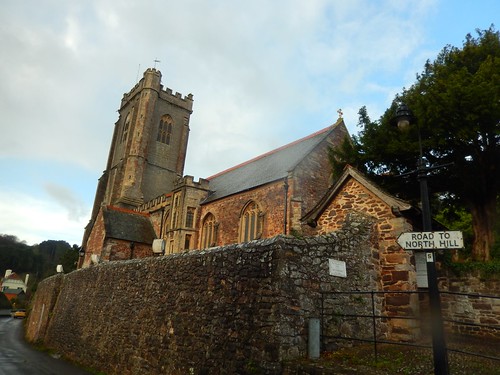 Along the road and around the corner, I caught sight of the coast for the very first time. My only challenge now was to find a way down to it, as I find OS maps very difficult to read in such built-up areas. 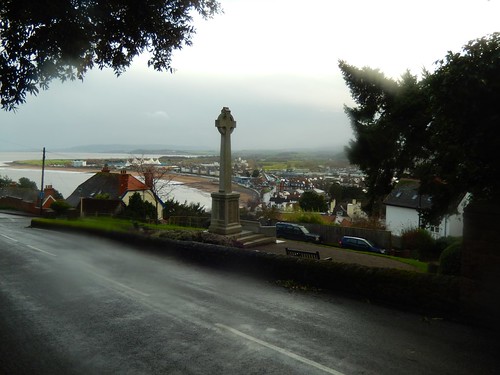 Even the clouds had begun to dry up as I moved closer to this sought-after location on my walk. Further beyond, I could just make out the Somerset coastline I am far more familiar with. 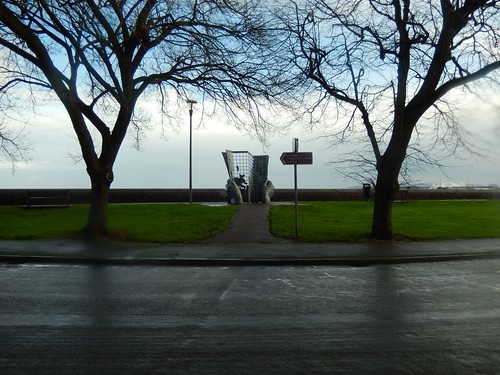 I took a chance upon a sequential set of steps that didn’t appear to be on my map (at least, at this scale) and, what do you know, I emerged at the roadside immediately opposite the official start point of the South West Coast Path! 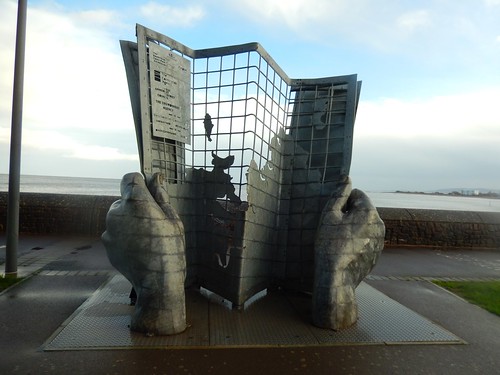 At the other end in Dorset, six-hundred-and-thirty-miles away, is another marker for the end/start point (which I’ve not seen in person). However, this map-and-hands combination appears to be the general favourite. 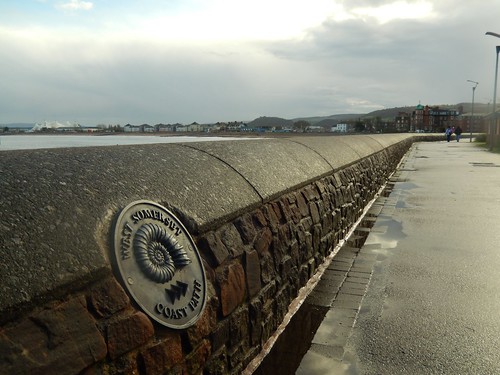 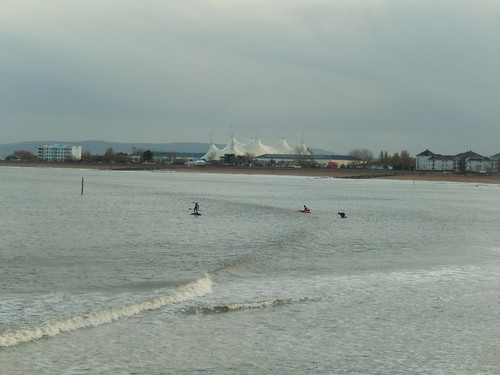 People that I know locally seem to give Minehead a bit of stick – as they do with other coastal towns, slightly further north – but I can see why it might be a popular place to retire to… Butlins aside! 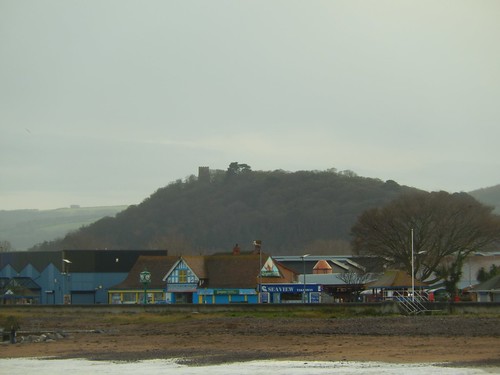 To the east, I could see Coygar Tower folly, standing proud on top of a hill in Dunster. I do intend to spend more time walking around Exmoor this year. 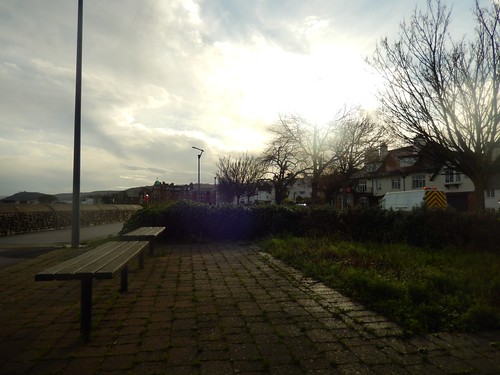 With the sun now almost breaking through the clouds, I took refuge from the cold wind beneath a fairly typical seaside shelter… My only mistake was to first sit inside the thing, which had a definite stench of urine! So, I chose to sit on the outer east-facing side in brunt of the breeze. It was cold without chilling and I was able to rest up for lunch, ahead of the unknown coast path that lay in wait.

4 thoughts on “Selworthy to Minehead (Part 1)”