On a rare day off from work yesterday, I found myself with a day that had become free and undedicated, as previous plans fell to pieces earlier in the week. Rather than reversing my decision and completing a full week in my job, I decided to hold on to this day of ‘me’ time and, naturally I was going to be looking for a walk today. 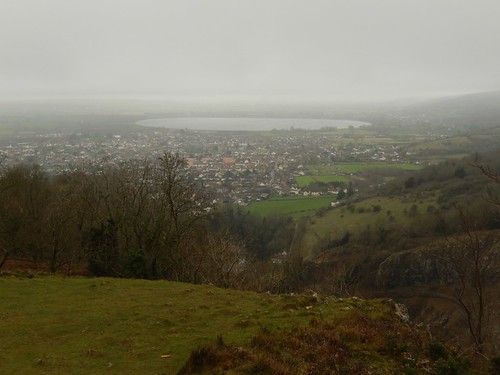 As with other recent walks, I wanted to stay quite local and didn’t feeling entirely comfortable with the outlook of the weather forecast. Having not been there for at least four months, I decided to head for Cheddar Gorge.

This would also be the first occasion in which I’d walked here in winter. I had anticipated that it wouldn’t be very muddy and therefore, left my walking pole in the boot of my car… 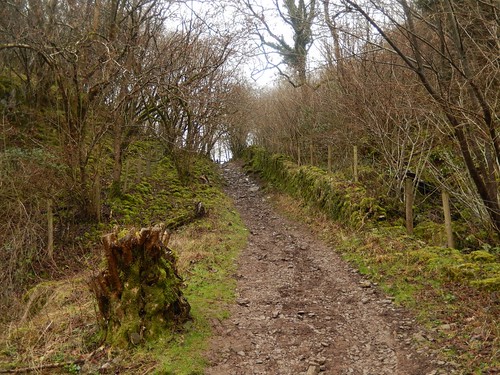 I’d parked at along the gorge road at entrance to Black Rock. For one, it’s free and secondly, I trusted that there would be plenty of space as it was a Thursday late-morning. 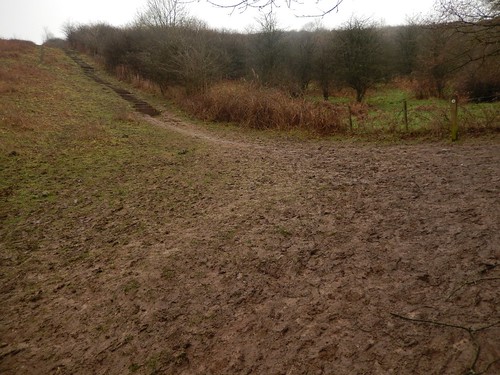 From there, I began the gorge walk in an untraditional ‘anti-clockwise’ direction. As I left the roadside to climb the first hill, in anticipation of the steps that lay ahead of me; I contemplated a brief return to my car in order to retrieve my walking stick…

However, that thought remained as nothing more. 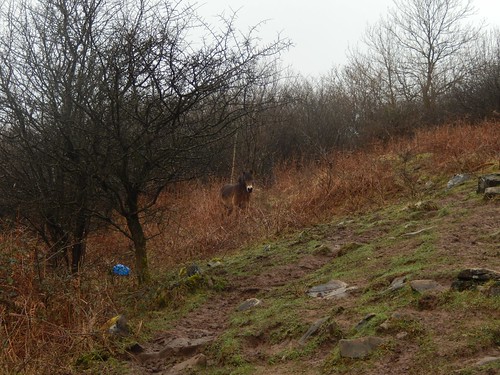 Those steps were more welcome than they had been on any of my previous visits, heading either up or down the hill. But the mud was something else – evidence of heavy footfall was all over the 4m wide path. Even at the top of the steps, where I’d hoped the terrain might’ve have ‘dried out’, I was traipsing through puddles and over slippery rocks, whilst fighting to remain on two legs.

I did also see a pair of horses though – quite possibly, the first horses I had ever seen on these cliffs. 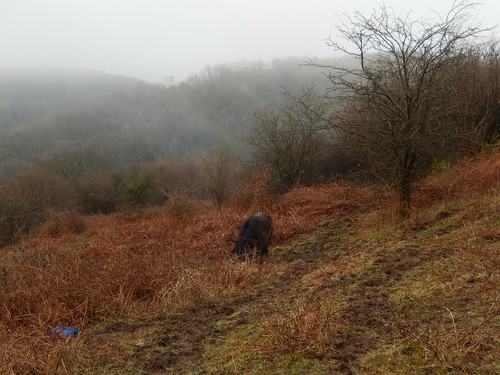 On the drive through Cheddar, I’d noticed workers burning what I presumed was heather, upon one side of the gorge. I also made the assumption that they were responsible for the ‘fog’ sweeping over the hillside but, as I climbed to the summit, I realised this was all an act from the force of nature. 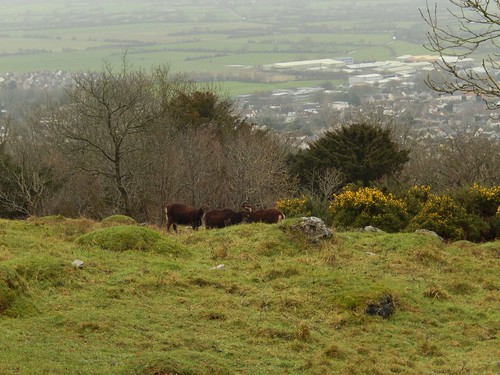 Making my way over the brow, I spotted a couple of goats (if not kids) head-butting each other on the other side of a dry-stone wall. These animals are a frequent find on this part of the Mendip Hills and they’re well known locally for their lack of fear, when it comes to spending time at the foot of the gorge, alongside the road. 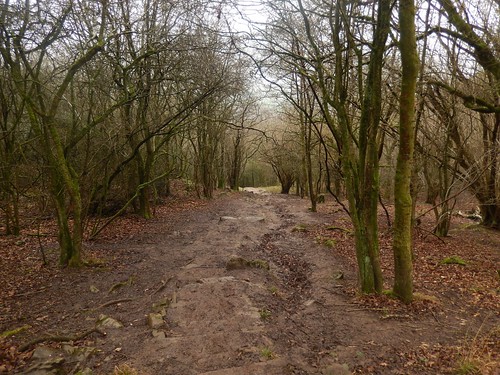 Soon, I began the dreaded descent of what is the single most steepest section of the National Trust’s official gorge walk. At the bottom, I would also reach the official start for that walk. 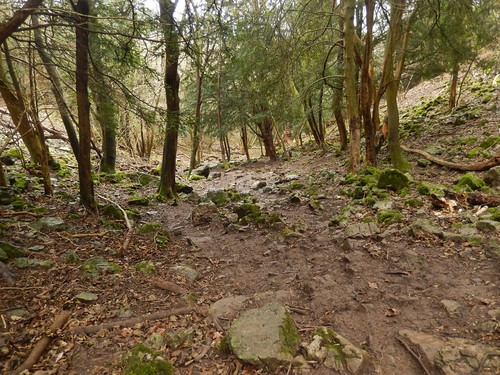 I did very well without my walking stick, even if it did take slightly longer than usual. But it wasn’t until I’d passed a pair of dog walkers who were on their way up, that I suddenly lost my balance and slipped backwards… But for the quick action of my arms, I’d have reached the halfway point in this walk with a lot more than two muddy gloves!

Then, it was down to the road again, which I had to follow through the tourist trap stretch of the village: 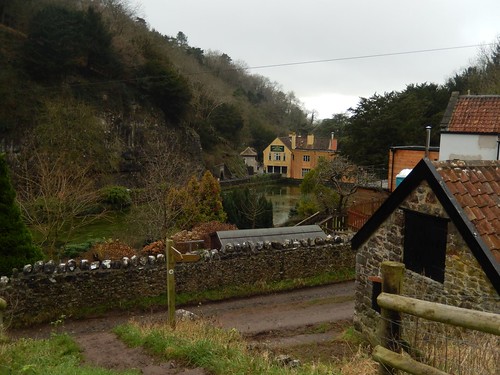 I had, of course, anticipated an absence of pavement dwellers as this was not weekend visit. But I still surprised to see half of the shops are closed on a week day. It may be seasonal and it was mostly the stores selling gifts, rather than the traditional cider and cheese places, which appeared to have been running all day. 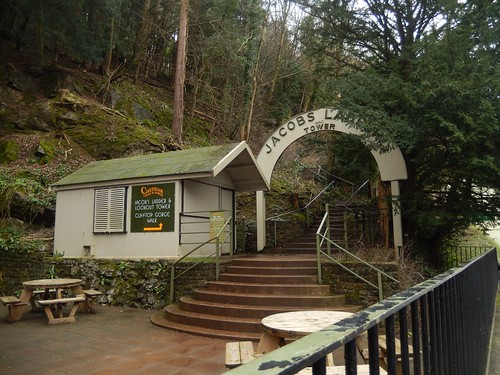 Each time I pass Jacob’s Ladder, I often wonder how many people must feel that paying an entrance fee and accessing the steps via the shop is the ‘only’ way to climb the cliffs on the south side of the gorge… 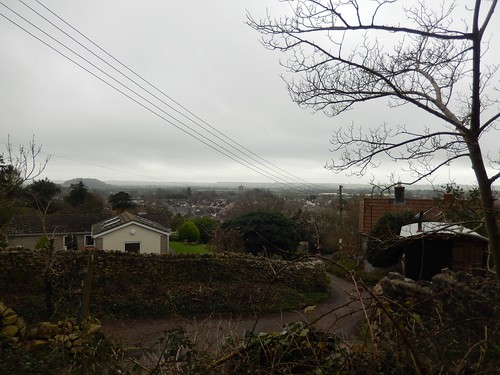 Like a local, I always continue a little further (unless I’m walking in the opposite direction), following a left turn towards a hillside car park, then branching left before that up Lynch Lane, where a public right of way leads you up and alternate and uneven path to the base of Pavey’s Lookout Tower. 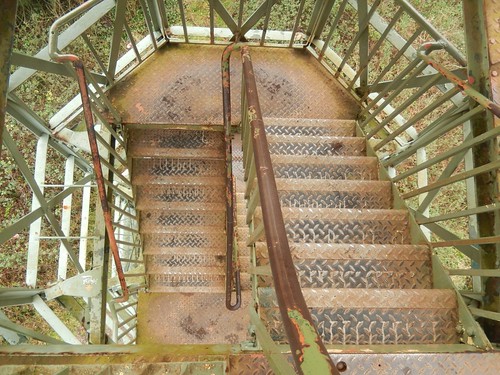 High up in the tower, I could see only four other people. On the ground, there was no-one else to be seen or heard. I hadn’t been up there since 2013 (as far as I can recall…). 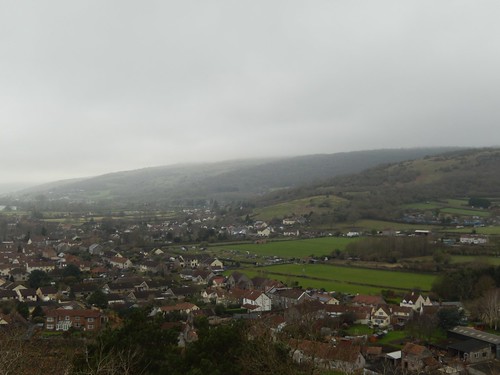 From the viewing platform at the top of the stairs, you could see only a portion of the Mendip Hills running off to the west, with the summit of Crook Peak masked behind the mist and cloud. I contemplated what it might’ve been like to have stood there at this moment and what the panoramic visibility would’ve been like.

Around the perimeter of the stomach-high railings was the name of a local landmark and in the set direction with its distance from the tower. So, the tower isn’t round but has multiple sides to its shape, like a dodecahedron. You could see the likes of Glastonbury Tor, Brent Knoll, Shipham Hill…

Then, there was Birmingham! 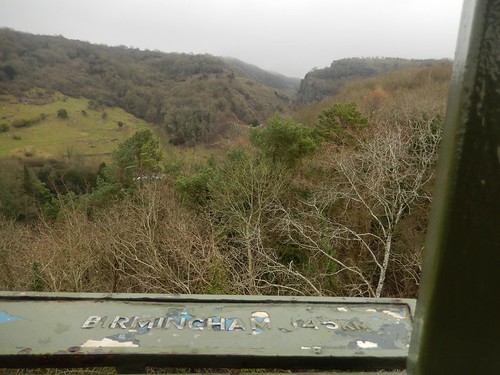 I don’t know. I mean, if you were to drive north from Cheddar Gorge for 145km, do the people who built this tower truly believe there is nothing more noteworthy along the way?! I could understand if London, our capitol city, was given a mention here. But… BIRMINGHAM?!? It’s one of the most urbanised-lacking-in-green-land cities in the UK.

It would make for a an interesting documentary on the BBC or Channel 4 though, where one man sets off on on a northerly walk from Cheddar to discover what lies between here and Brum…

The Only Way Isn’t Birmingham?
Discovering the Cotswold Hills?
There’s More to the Mendips than Brum?
Before the Black Country? 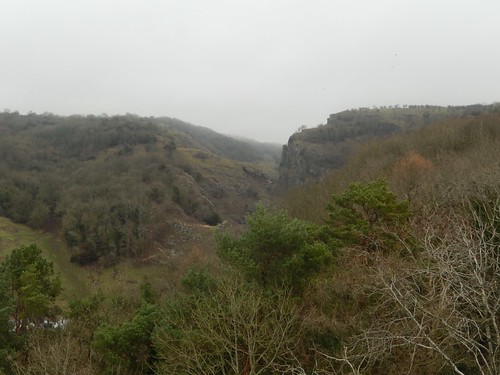 As I tried to remove memories of apartment buildings that towered high in to the clouds in a city where every green space and hill appeared to be littered with all forms of grey; my walk continued, climbing again to the summit of the southern cliffs of Cheddar Gorge. 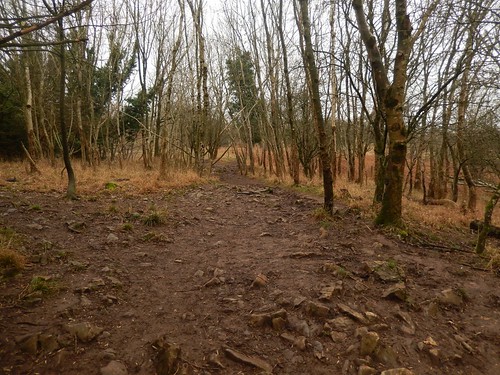 While the path was uneven, it was certainly less muddy than what I’d experienced across the way. I wouldn’t have enjoyed walking downhill, with its absence of steps but I wouldn’t have to think about that until some time after lunch. 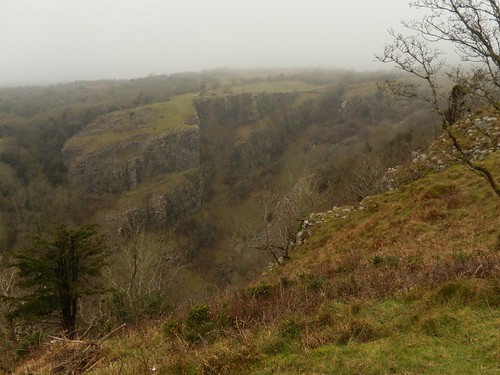 That mist I’ve noticed ninety-minutes earlier continued to loom and appeared to be growing, as I looked north across the gorge. 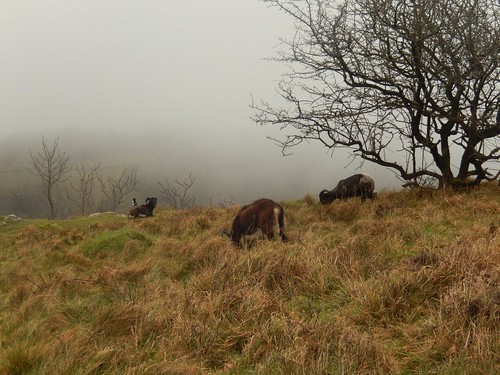 I settled down for lunch infront of a shallow wall of rock, with goats nearby for company. A slight wind from the south-west was chilling but didn’t stop me from resting here for almost half an hour, as I took in the view. 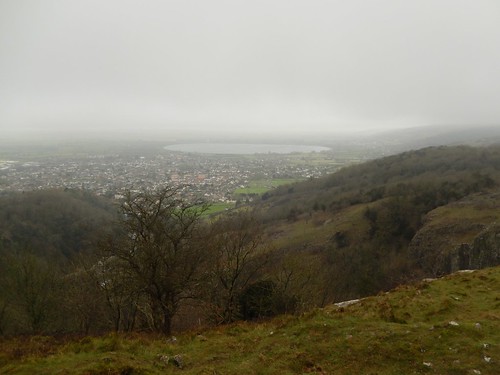 By the time I set off for the final thirty-minutes of this walk, it was apparent that the mist had certainly thickened. 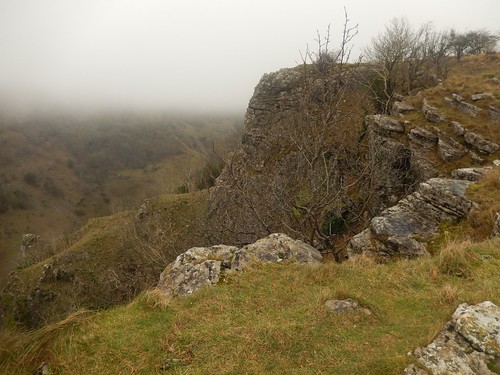 Behind me, both Crook Peak and Wavering Down had all but disappeared. Brent Knoll was nowhere to be seen. 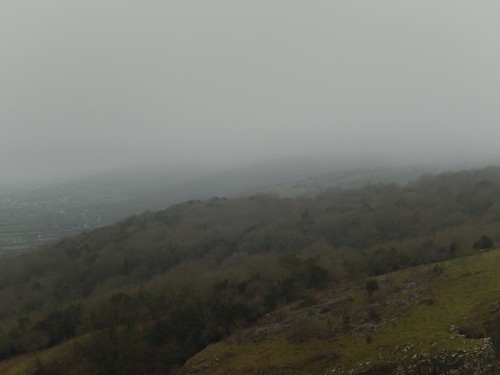 Looking across the gorge, there was an absence: 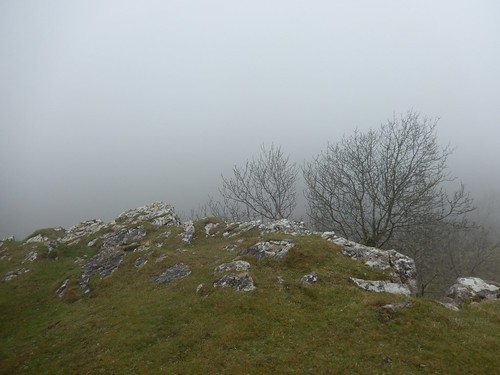 It was spectacular. A truly unique walking experience that took me back to thoughts of the Exmoor Perambulation last June. Fortunately though, it wasn’t raining on this day, the ascents weren’t quite as demanding and I could find my way without a compass. 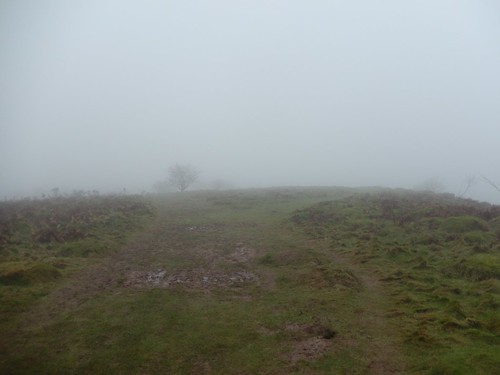 Very soon, there was nothing left behind me. Does this happen often up here, in the winter? 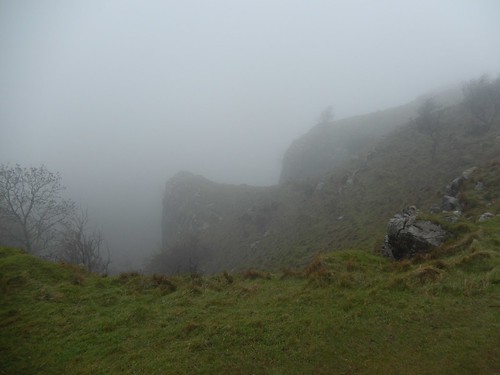 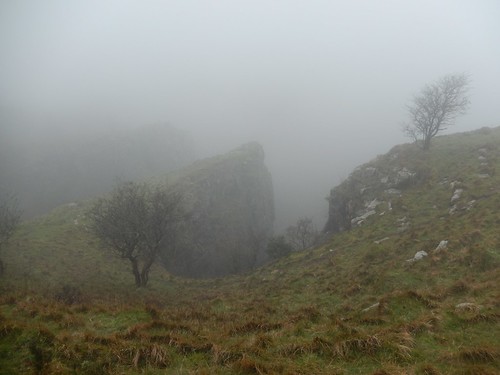 I’ve been thinking about filming a video of this walk and I’ve also been encouraged to do so. Up high amongst the mist, I did regret not having prepared myself for this rare opportunity, even though the decision to walk here yesterday was largely unplanned and spontaneous. 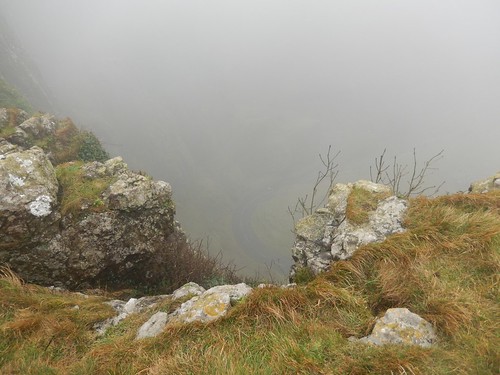 You could just make out the Cliff Road, far below. 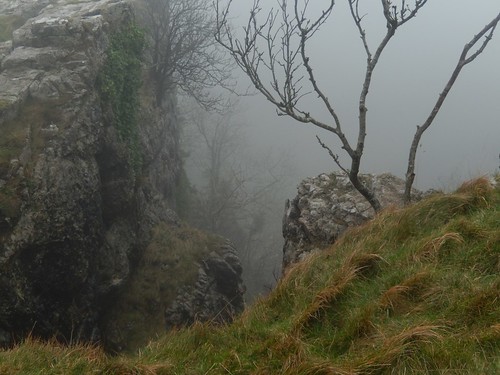 Visibility could’ve been reduced no more than 100m. 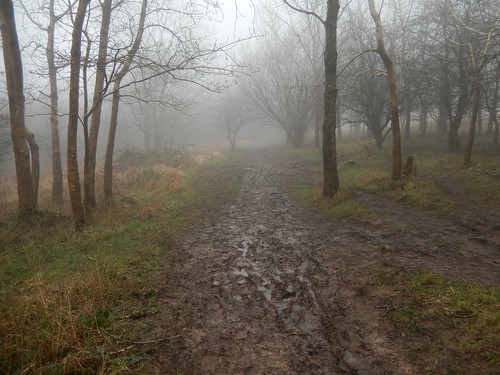 I did pass one last couple (who seemed to be in the midst of an argument) before completing the circuit and returning to my car.

From here, it was strictly downhill and I could see the path I was following was again, well trodden and eaten up. I took every step with caution and very nearly lost my footing close to the roadside. But I made it back to my car with surprisingly little mud on my trousers, considering the half-mile of squelching I’d covered in the first section of the walk. I cannot say as much for my boots though, which remain in the back of my car! 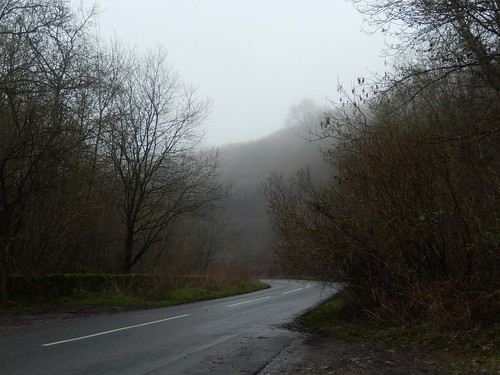 Back at the car, visibility was improved at such a lower level, while I still had to use my fog lights for the drive home. I felt so glad to have taken this opportunity to come here and for the experience of walking with the mist.

As I reached the road and standing opposite the entrance to Black Rock, I spotted a notice on a wooden post, warning dog owners that this is an area where dogs are tragically being stolen. I couldn’t believe what I was reading. I even felt a bit sick in knowing that. It was also a little concerning that this was the only sign of its kind I had noticed on the walk.

To see my full set of photos from this walk, please click here.

Anyway, I don’t wish for that to detract from the positive experience I had yesterday and I thank you for reading.