Setting off from the summit of Wills Neck, it was time now to make an eastward return towards Broomfield. 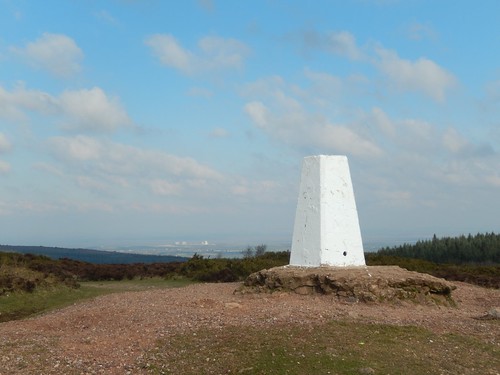 From here, there was only one question on my mind… Could I complete this walk without encountering any obstructed footpaths? 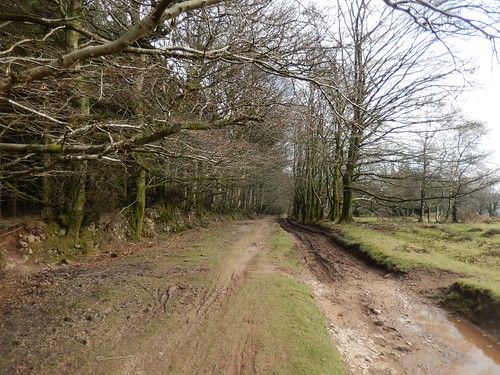 Actually, I did stop for lunch on the southern edge of Great Wood, where I was sheltered from the wind… But from here, I would often look to complete a circuit stretching to somewhere between sixteen and twenty miles long. This time, I’d planned to complete something only around twelve miles long. 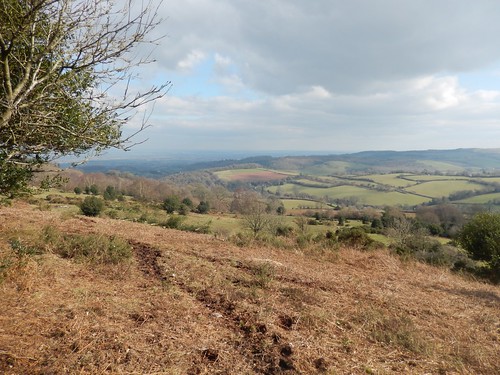 These views across the east of Somerset are to be adored. 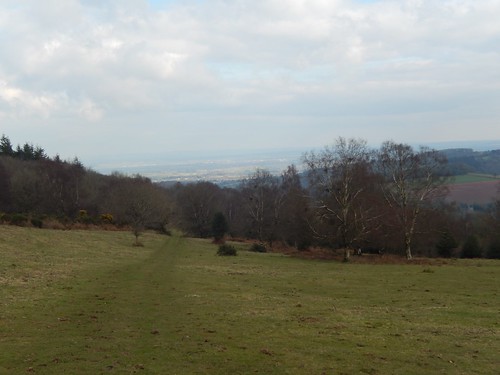 Following the forest boundary initially, I knew I’d be looking for a diagonal turn down across Aisholt Common, that I avoided last time for a complete lack of waymarking. 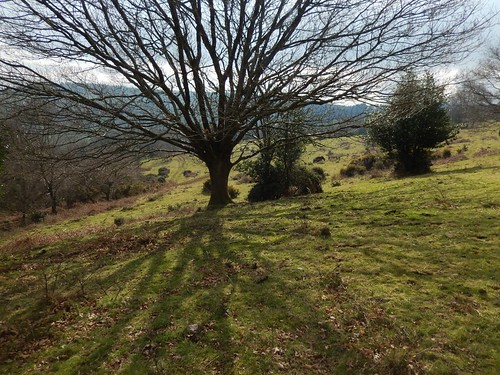 It proved to be a challenge and, with two possible ‘entry points’ on to the common, where my map only clearly showed one. Being common land, I guess people have a right to roam much of it – at least, that seemed to be the opinion of several dog walkers I’ve seen. Eventually, I stumbled upon vehicle tracks leading down to a field gate. At the end of the lane was a bridleway sign, meaning I’d found the right path after all. 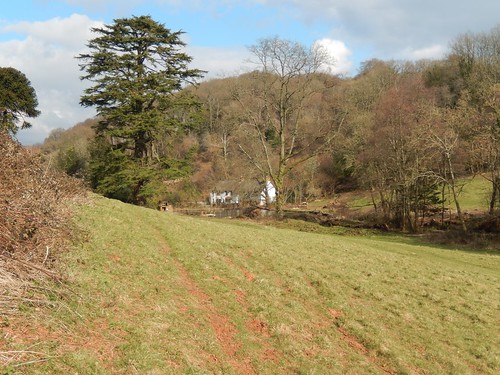 Now in Aisholt, I crossed over the road to take a path heading toward the distant church.

I remember crossing over a footbridge to get there – and I haven’t seen many of those in my time exploring the Quantocks. 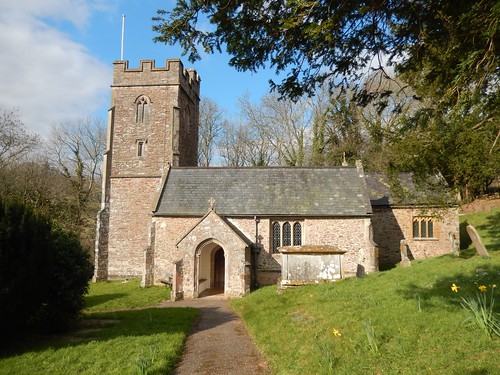 This path was easy to follow and I soon arrived at the rather small church. 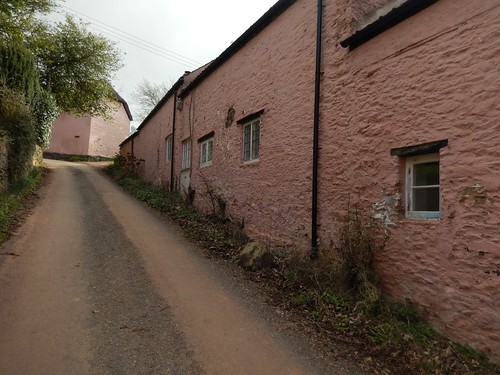 From there, the road (and my route) climbed uphill. I passed a pair of walkers I’d seen earlier in the day, whilst walking alongside houses that appeared to sink beneath the road’s edge. 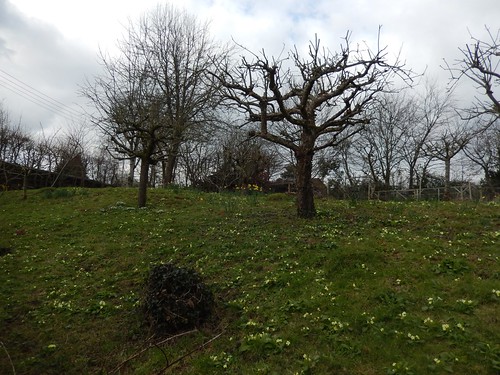 I also passed a familiar footpath that would previously lead me on towards Hawkridge Reservoir, with both brambles and aggressive dogs biting at your ankles before reaching the next road. 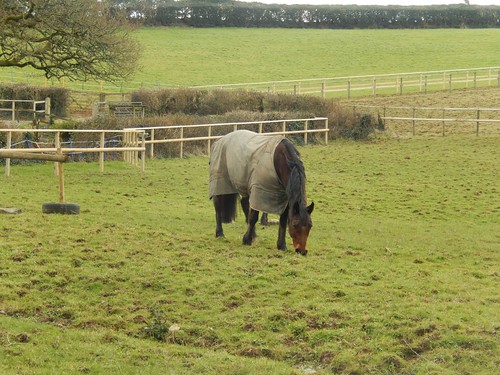 Sticking to the road for a little longer, as it began to climb again; I later departed via a right turn up beside Good’s Farm. As I climbed the right-hand edge of this field, following the right of way as indicated on my map, I could see a line of newly installed fencing ahead of me and came to a halt when I realised there was no way to pass through.

A thought of climb over crossed my mind as I hesitated, before a woman’s voice called out from below:

“Go through the gate!”

I turned around, pointing to the left-hand corner as if to imply that I knew what I was doing… In all honesty, I couldn’t clearly see the woman and as I reached the gate, there was an absence of waymarking. Misreading my map from there (whilst, technically, away from the legal right of way), I passed through another gate heading to the top-left corner of the hill… Only to come to a dead end.

On the way, I spotted an older kissing gate in the top right corner (which I would’ve surely reached, had that new fence not been in the way) and would have to head for that (fortunately, the same woman didn’t shout at me any more). 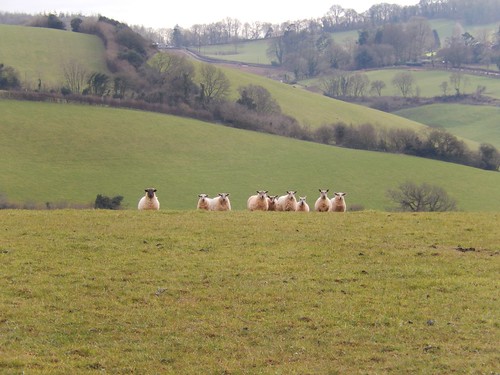 High up in the next field, I was pleased to turn back a see a cluster of trees fall between the farm house and my present location, where I dithered between one field gate and the next – again, due to a lack of waymarking. Even the sheep in the next field looked bemused. 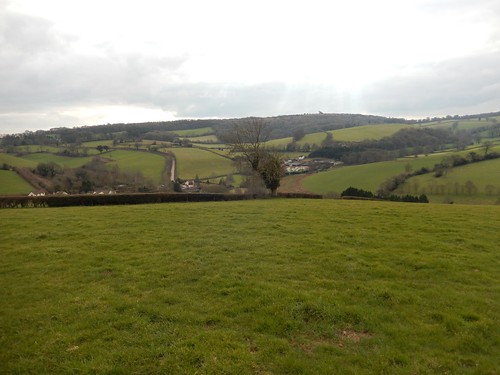 I’m very suspicious of areas where waymarking is absent or has clearly been removed… Is the landowner trying to deter people from crossing their land? I can’t imagine how these small round signs can be broken or removed so easily or ‘accidentally’. Yet I only seem to encounter this on farm land.

After some deliberation and compass work, I continued on in what would be the correct decision, crossing the field towards a stile that was almost impassable: 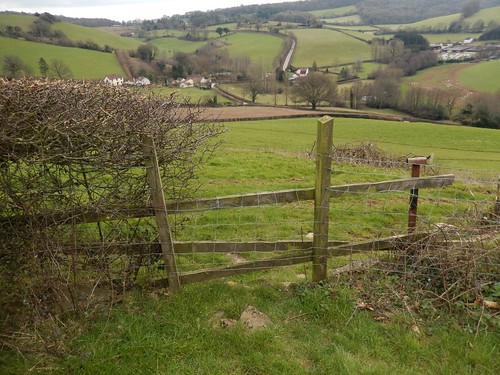 There was nowhere to comfortably place your foot while the lower half was sheathed in stock wire fencing. On the the other side of  the post though, I did spot a sign with a yellow arrow!

My next intention was to head diagonally left from here, to the top corner of the field. But the right of way leads you down to the bottom corner where, at the roadside, you must then follow another path, alongside the right-hand fence. I felt very exposed on this side of the hill and didn’t fancy doing an ‘illegal’ left turn straight across the higher ground.

Returning to the same road I left earlier, I followed a tractor and a clear footpath sign on to the driveway of Torr’s Farm. 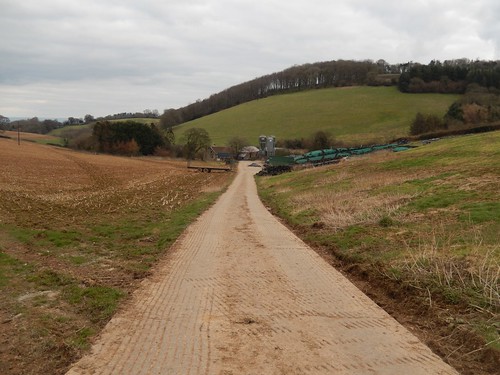 Before reaching a junction of paths, I encountered these neglected old farm buildings, indicated as Great Holwell on my map: 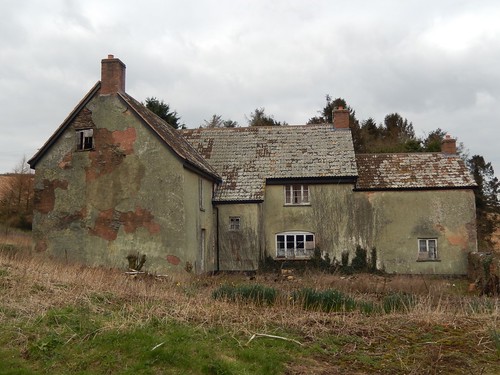 I like the fact the the room upstairs still had curtains in the window was glass was partially missing but I should’ve taken it as a warning for what was about to follow. 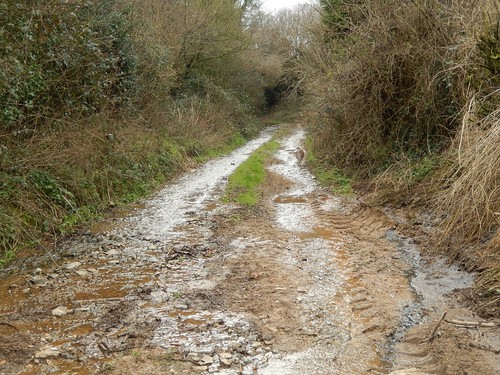 Feeling confident in this track leading to and from a farm, my heart sank a little as I noticed water running down the hill towards me. But with waterproof boots beneath me, I soldiered on. 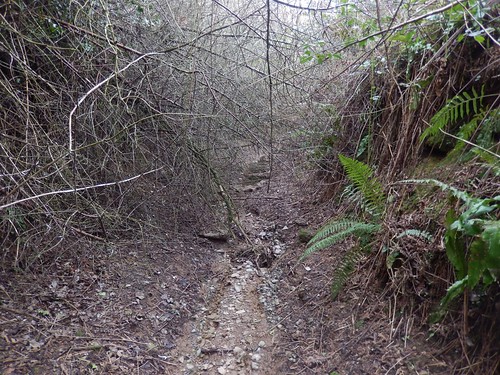 From there, it just got ridiculous. Brambles hanging down from above me would reach as far down as my knees. I tried to look through the overgrowth, hoping it might only be for a metre or so. But with each minor ‘triumph’, I only found myself heading deeper in, with the same fate lying ahead of every footstep, whilst also making a return journey equally as unwelcome.

Sadly, this was when I knew that my attempt to complete a successful twelve-mile walk in the southern Quantocks was over. I wouldn’t dare attempt to bring anyone else along this route. 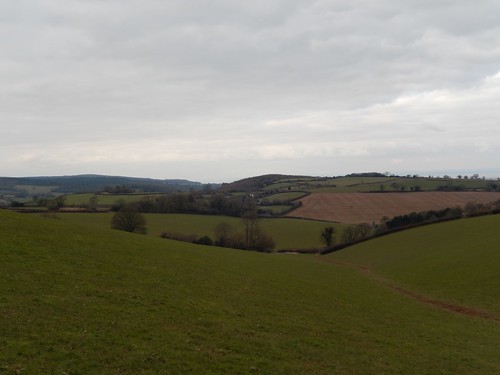 Fighting my way through all of that had left me exhausted. To progress any further from here, I’d have to continue uphill to reach the road. I barely had the energy but I knew that Broomfield Hill was very close. 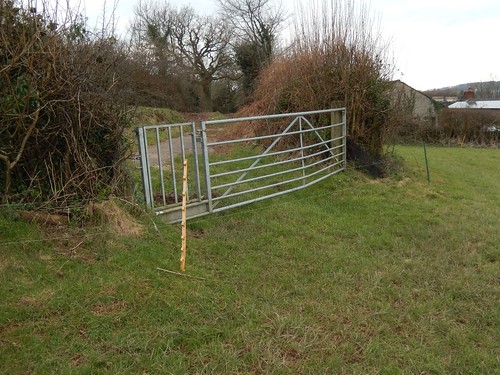 My escape was interrupted by this line of wire fencing. It wasn’t ‘live’ at the time but I imagine it could be in the summer. Yet, there’s no apparent way for the public to unclip and pass through safely. Not everyone walking through here is going to be six-foot tall and able to step over. 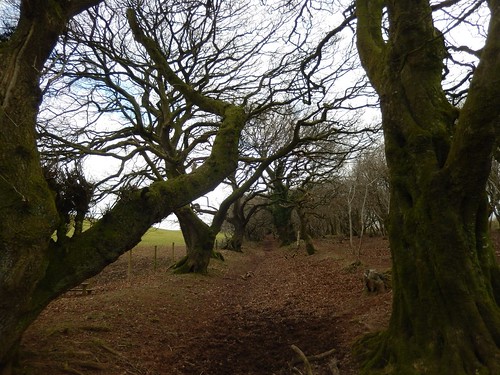 Entry to Broomfield Hill from its north-eastern side was only a few metres away. If I was a drinker, I might’ve instead carried on to the pub ahead of me. But I do enjoy following this tunnel of ancient trees. 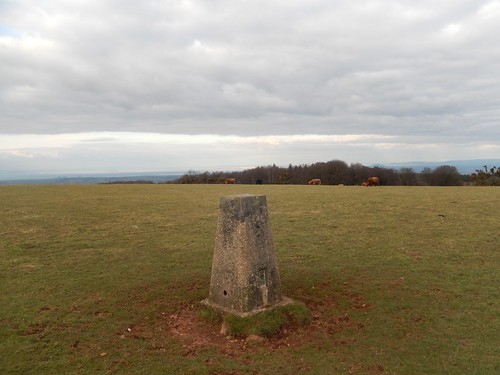 I knew the way back from here already. But knowing that my walk was already ‘over’, I instead went to seek out the elusive trig point I had never seen before – mainly, because of the intimidating cattle that roam the same field.

I know a Highland Cow when I see them but do they also come in black? I’ve always feared they might be bulls and, without wishing to sound racist, I’ve always found “black cows” to be the most aggressive. 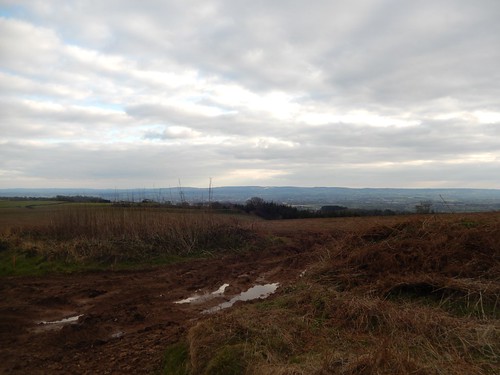 So, I expect to be heading down this way again in a matter of weeks to try yet another circular route. As a Ramblers group, we never seem to venture from from the northern half of the Quantock Hills (excluding Exmoor) and so I really am keen to show people what else is out there and waiting to be explored.