One week after my first attempt at this walk, I headed out to tackle it again, having already decided upon a slight variation of my original route. There was a determination to ‘get it right now‘, before I could move on to walking elsewhere. 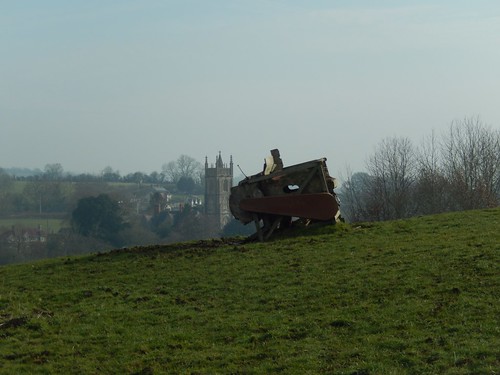 I’d thought about submitting to lead this walk today – as I write this, in fact – but the thought of walking the same paths for three consecutive weekends did not appeal. I’ve been walking elsewhere this weekend and you’ll get to read about that soon. Now, let’s return to Pensford. 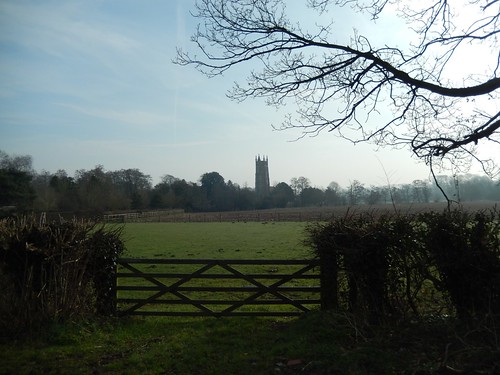 My start point hadn’t changed. One thing I did note upon arriving was that they appear to host junior football matches on a Saturday and so, the village hall car park was almost full. It’s always been quiet when I’ve turned up on a Sunday. 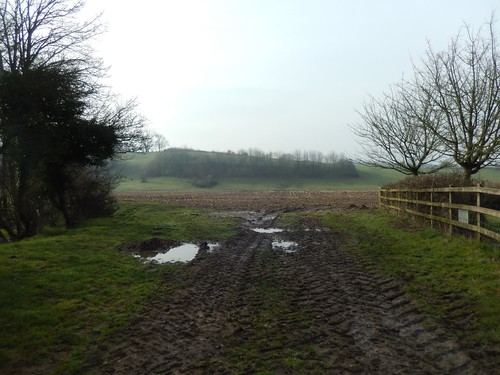 As I was confident from the very start, I decided not to head on to those initial fields and instead to follow the road a short distance to the church. I did notice, though, that the bulls I’d passed a week earlier had apparently been moving to an adjacent field with no right of way. But the mud and water remained. 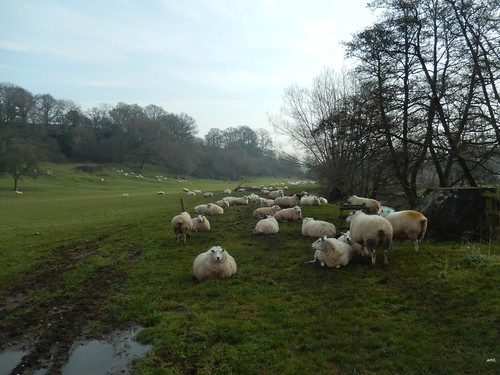 I decided that, on this walk and, for the very first time, I would try walking along the north side of the river, before joining up with the familiar path (I’m still not sure whether this is the River Chew or Avon). Following my map, I turned left around the farm buildings, through a wooden kissing gate and on to a fence in front of the house.

I’m sure there used to be a kissing gate here… There was even a sign asking you to ‘Please close the gate‘ but, I was staring at a post and rail fence… Finding that the larger wooden gate to the left was padlocked shut, I hopped over the fence to continue alongside the river. 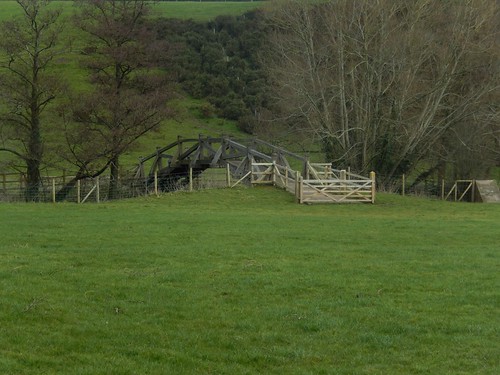 I may’ve shown you this bridge in Part 1 and commented on the fact that it was formerly private (even when I had crossed it) but on passing this time, I noticed yellow waymarks directing you across. So, I’m assuming the right of way has been redirected (perhaps this was why the bridge was constructed, after all). There just aren’t any signs informing you of the change. Even the Ordnance Survey website looks to be ‘out of date’.

I wonder how often they do update it? 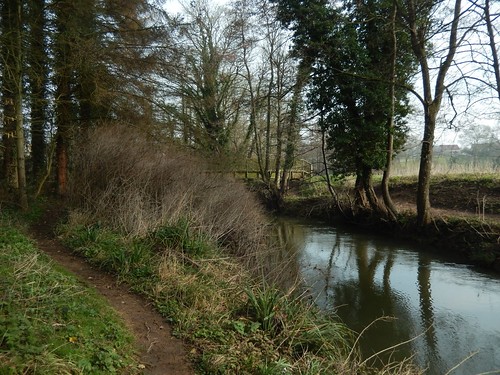 At the other end of this walk, you get to cross over a long wooden bridge before rejoining the official Two Rivers Way. 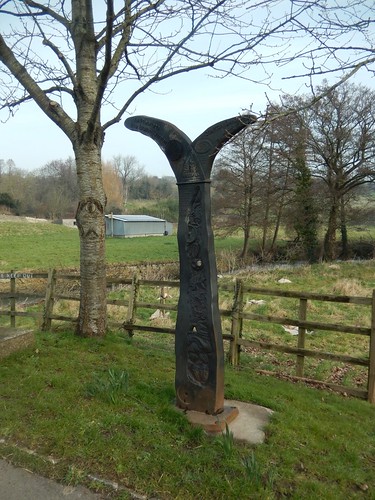 Passing through the village of Woollard once more, I noticed this milepost that I’d not spotted previously. It’s said to be one of one-thousand across the country, funded by the Royal Bank of Scotland (RBS) and marking the creation of the National Cycle Network… I was, of course, hoping it would be related to the Two Rivers Way. 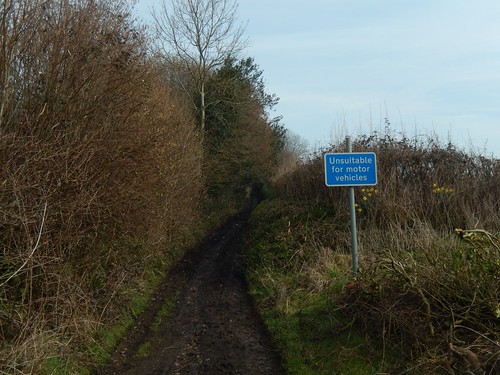 On my previous walk here, I favoured the fields of the Community Forest Path over the Two Rivers Way, as it appeared to travel up and unappealing road, of sorts. This time, I thought I’d give the road a look so that I could at least write it off with conviction… 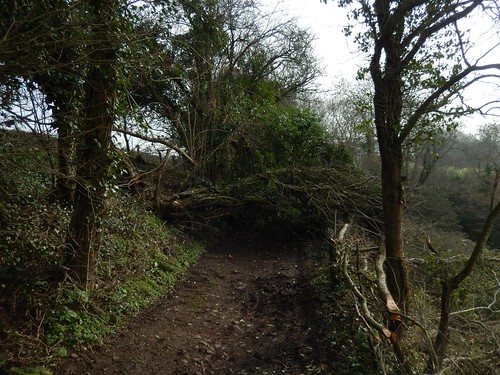 At the top of the hill, I came to a clump of fallen trees! It was hard to see how many and for how far this blockade would continue so, I decided not to attempt to fight through. It was then, back down the hill and to pick up on the path I’d walked six-days earlier (minus the runners and lack of direction, this time). 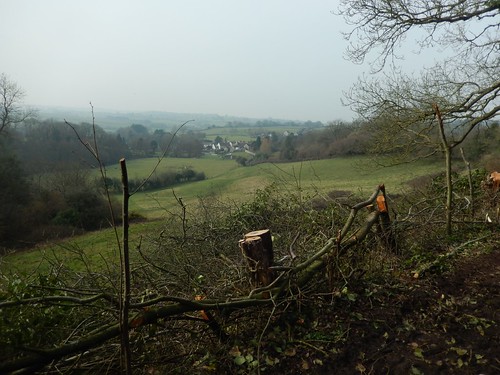 Arriving in Compton Dando, I knew that the path ahead of me was about to change, compared to the one I’d walked previously. Continuing the Two Rivers Way from here was easy, with the relevant waymarks set in place. 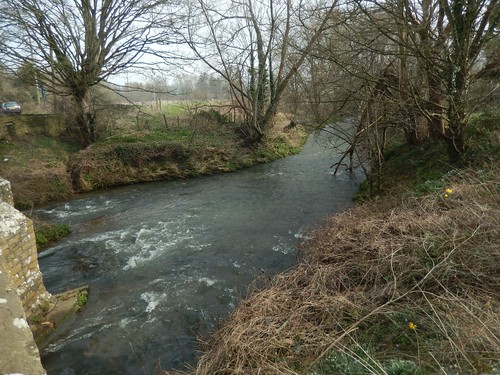 A succession of footpaths followed, including the occasional ‘footbridge’ to help cross the wettest bits. 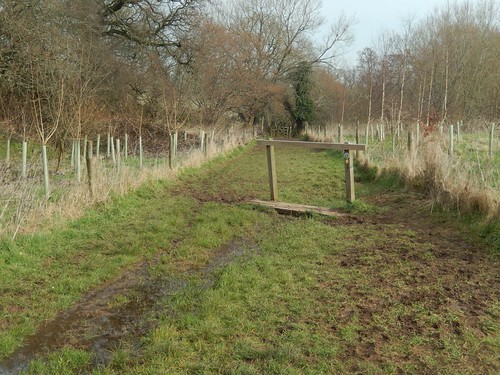 There was nothing overly challenging about this part of the walk. 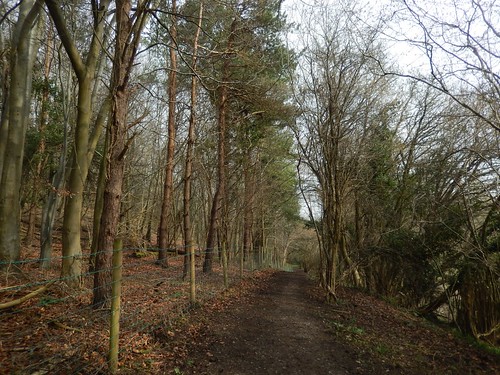 With a clear path worn in to the ground beneath me (I imagine this is a popular route for locals), I could almost put my map away and appreciate the scenery. 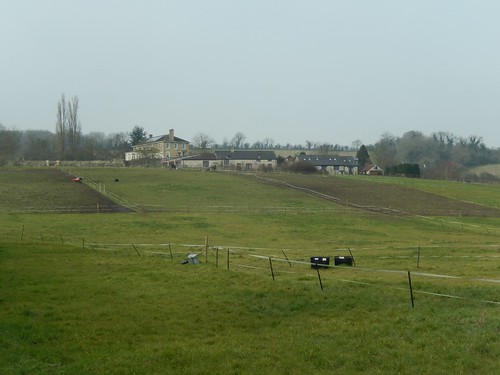 I was heading towards Keynsham, alongside the River Chew. 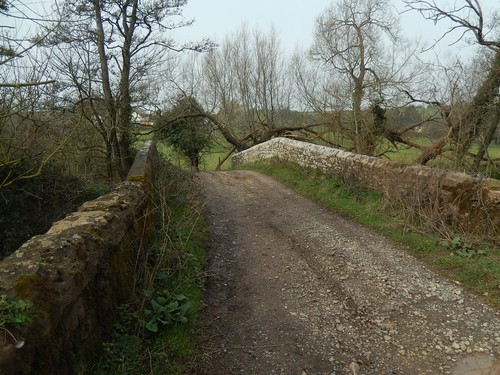 As I approached a byway with a bridge crossing over the river (in Chewton Keynsham), I knew I would have to say goodbye to the Two Rivers Way, to now follow the River Chew along its eastern banks, once again, headed for Stantonbury Hill. 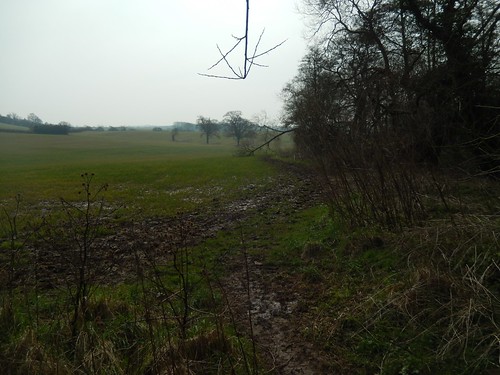 This appears to be a route that’s favoured by horse riders more-so than dog walkers and it was quite muddy underfoot, from the moment I stepped on to it. 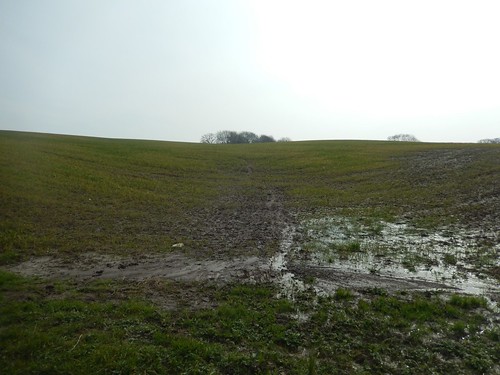 Entering the second field, I could see my map indicating that I should go ‘diagonally left’, up and over the hill to the left of a nest of trees. But I could also see small crops sprouting before me, no clear right of passage and felt I would be exposed, visually, from the heights of the mound.

Waymarks were directing me to turn left (a path which doesn’t feature on my map) or to veer right. I chose the second option, where it was clear that horses had trampled here before me. Plus, the follow the field boundary, this looked to be less of a journey than to circumnavigate the left-hand walk, which might’ve led me to a B-road.

But for that suspicious waymark angling to the route, I might’ve exercised my right to roam and climbed up across the cropped hill, adding a few inches of my to my soles along the way. 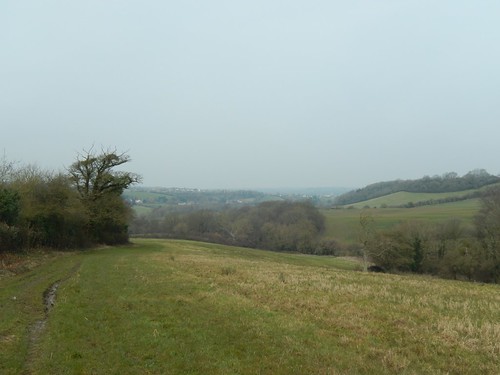 I was right to be heading left of those trees and, as the path re-emerged ahead of me, I turned back to take this distant view of Keynsham, beneath a murky sky. 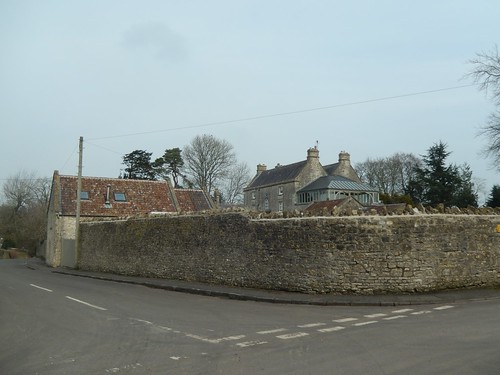 I successfully found my way to Burnett and would follow its quiet road a short distance towards the howl of the B3116. 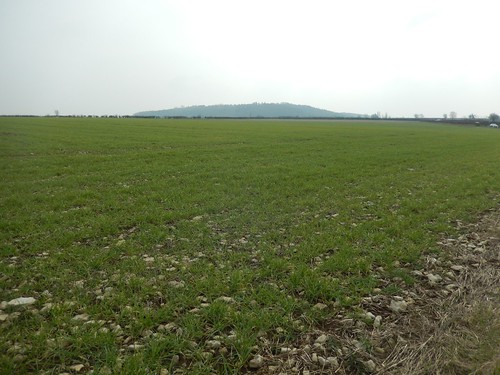 Stantonbury Hill was in sight, as I crossed over and in to a field with a gate or stile, but no wall or boundary.

Without a clear path to cross the field as my map indicated I legally should have done, it wasn’t a pleasant experience walking beside the road. But the tracks were more favourable than trekking across grasses laden with large rocks to stumble over. Eventually, the tracks turned left and I was on my way. 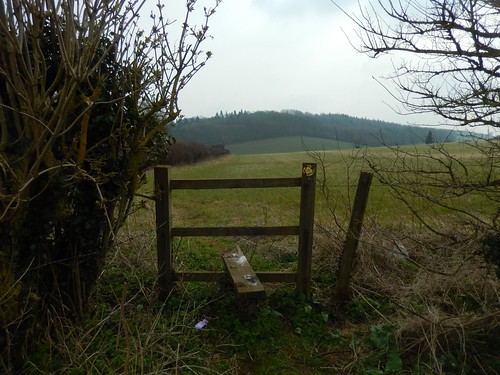 Stepping in to the next field, my heart stopped momentarily as a barking dog burst through from the hedge to my left, bearing its teeth with full aggression and a strong intent to keep me away. It wouldn’t listen to the fact that I was walking on a public right of way. Fortunately, the owner (and landowner?) was able to call it away so that I could resume breathing and continue my walk. 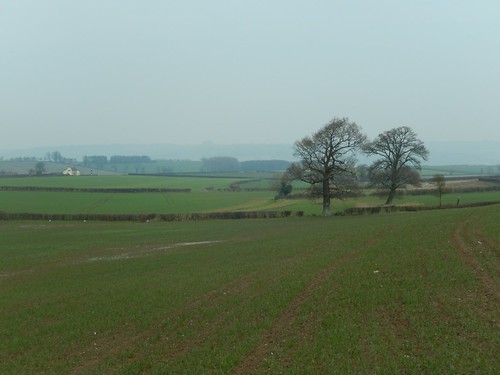 Crossing the A39, I began a familiar climb up to Stantonbury Hill. Looking left along the way, to the faint image of hills to the north of Bath. 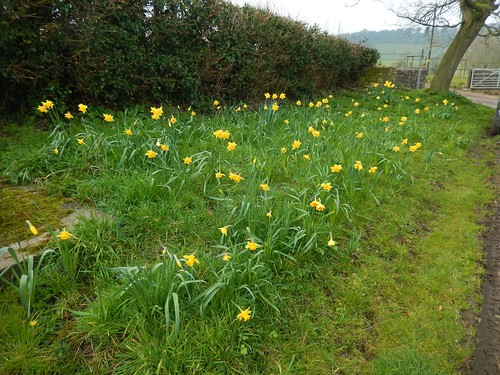 Down in Stanton Prior, I noticed large collection of ‘yellow flowers’ (daffodils?), divided by a bench. For the first time in my years walking through here, I also noticed human life when, usually, it is only the cows. 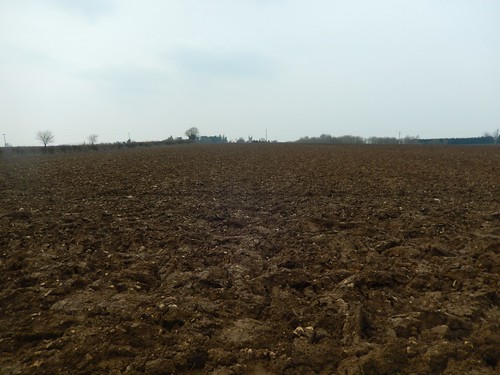 From here on, the walk would barely change to the route I took previously. But as I began my march towards Marksbury, I came to a halt at one field who’s soiled had been turned over within the space of six-days.

Most people would choose to walk the perimeter, here. Legally, that is trespassing. But, as the landowner hasn’t fulfilled their duty to keep the right of way clear and accessible, it’s probably the best thing to do. Of course, walking on my own, I chose to fight and exhaust my way across the lumps of dirt… It wasn’t fun. 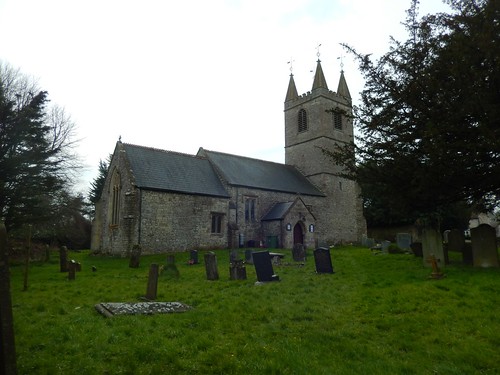 I stopped for lunch outside the church in Marksbury. It was too close to the A39 for comfort but I’d already ventured far enough without eating. 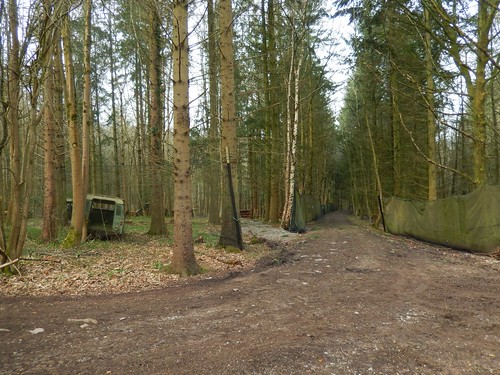 Within the hour, I passed Hamburger Hill, as before and would soon join the Three Peaks Walk. 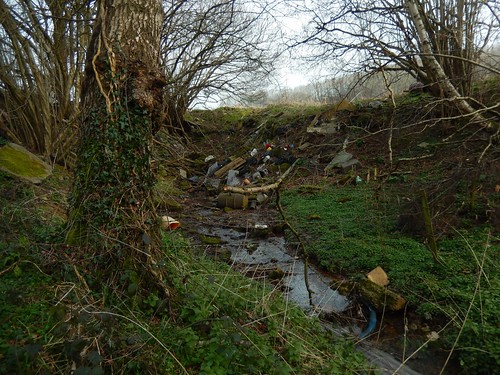 A short way before entering Lord’s Wood, I noticed a large collection of rubbish, idly dumped down in to the water. I can only imagine this is the landowner’s doing, as this would be a fair walk from the road or any vehicular path. I find it’s doubly disgusting that someone could do this to their own land. 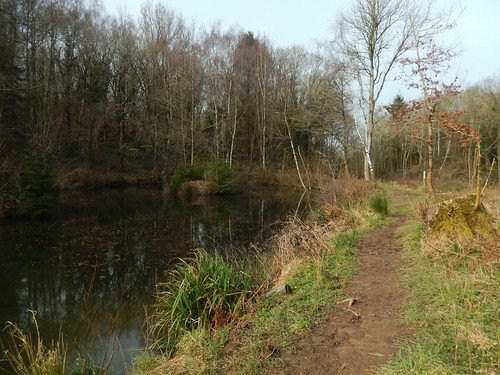 As I reached the pond again, I took the time to stop and drink some more of my tea; knowing that I was only a half-hour away from finishing the walk. 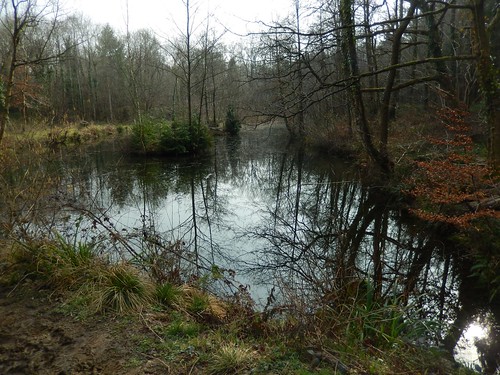 Following the remainder of the Three Peaks walk on this occasion, it turns north, up alongside the water’s edge.

I took a more confident stride up and over the final fields before returning to my car, with a feeling of satisfaction at having compiled and completed a walk of reasonable length that I would be quite happy to lead, soon.

I also tracked my timing in the following way: