Stonehenge is one of the UK’s most popular historic sites. People flock to it each year from all over the globe and, with the Summer Solstice barely a month away, it’s probably a peak time for visitors to the ancient stones. 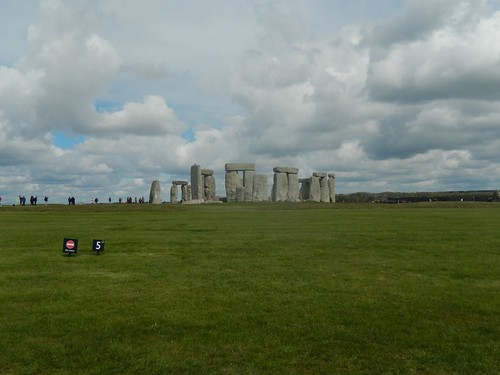 For me personally, it has never been more than a ninety-minute drive from any place I’ve called home. After thirty-one years on this Earth, I recently made my first-ever visit.

Being so well-known, I had always imagined it would be busy, on whichever day of whichever time of year you might choose to visit. Only a reasonable journey from home, I’d always taken it for granted at the same time; assuming I could go at ‘any time’… It was when a friend shared that she’d not been to see the stones either that we made plans for this arrangement.

It is advisable to book your tickets online. You’re then given a time slot in which to arrive so that you can pay for and collect your tickets before exploring the museum and beyond. We booked ourselves in for the 9.30am slot (the earliest available) and, after one-hour and fifteen-minutes of driving, arrived in good time, thanks to the SatNav.

Car parking, I’m pleased to say, is free. There’s also room for coaches, as you would expect but, we were both surprised that the car park wasn’t bigger – as we later came to leave before lunch, it was close to capacity and it look as though stewards were directing cars to an overflow space on the grass. 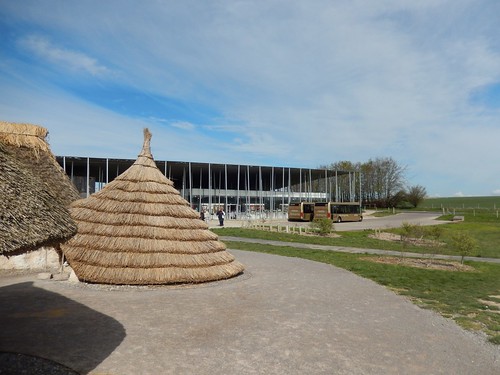 On the Saturday of a Bank Holiday weekend, there was a significant queue, as you might expect. A second line provides access for people looking to purchase tickets on the day (those who haven’t pre-booked) but that seems like it could be a risky option – certainly, later in the day.

If you’re a member of English Heritage or the National Trust (as I am) then you’re allowed free access to the site. Otherwise, an adult ticket is around £15 – which is, to be fair, about average for ‘full property’ access to most National Trust sites. 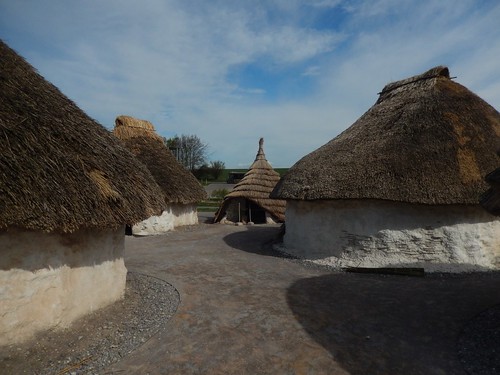 With a café and restaurant to our left and museum to our right, we initially bypassed them both to explore the outdoor attractions, where you’ll find a series of huts, built in the style of what the builders of Stonehenge would’ve lived in. 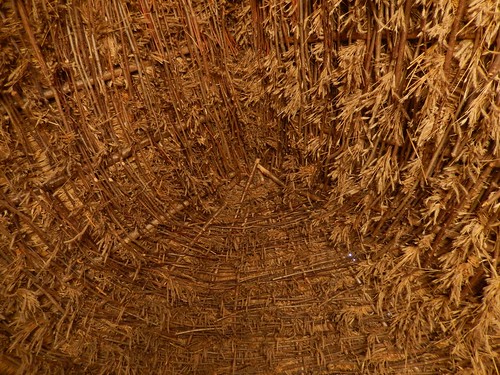 After ducking down to stoop inside a couple of these huts, we found the thatched roofs to be good insulators while the interior felt surprisingly spacious. From the outside, each structure looked tiny. But they’re not short on headroom. 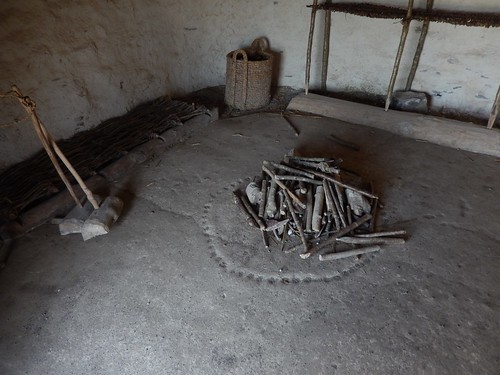 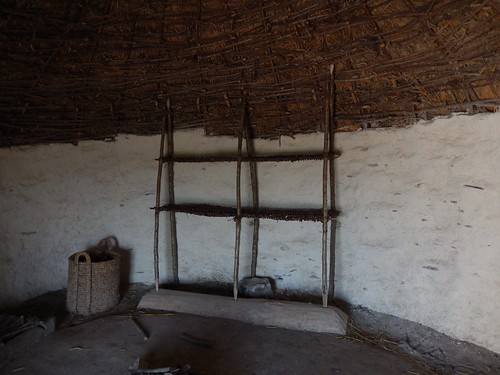 Beside the huts was a replica of one of the standing stones, in a setup based around one idea on how these stones were originally moved from their homes in South Wales – many, many miles away! 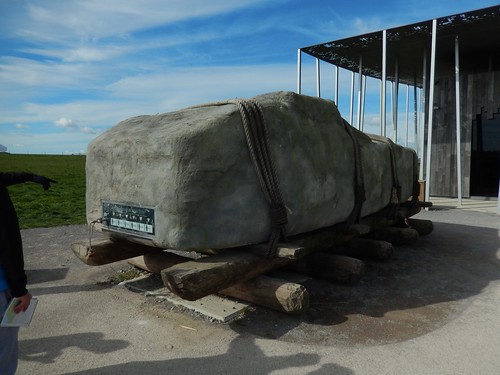 These seems to have been installed (or more recently incorporated) as a ‘perfect photo opportunity’, where people would cue up to have their photos taken, as they accept the challenge of the sign, questioning whether you can move it…

Neither of us took part in this! 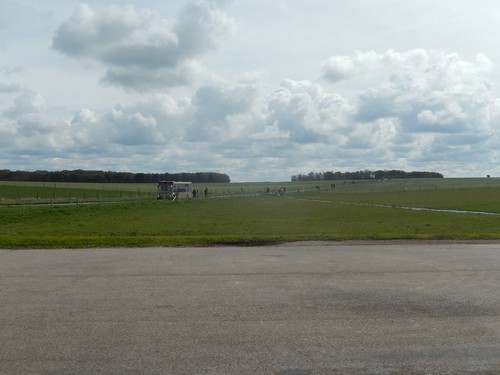 Those stones we had drive so far to see remained out of our vision. We’d both expected the formation to be visible from miles away and we were both surprised that we hadn’t spotted it on the drive over, especially as we passed Salisbury Plain. 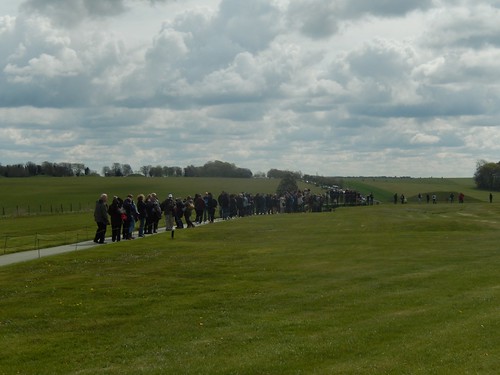 We then spend probably a good hour within the museum itself, while it was still relatively ‘less busy‘ in the early-mid morning. As you would expect, there’s a lot to read up on the history of the stones, their previous formations, locations along with things that scientist had learned through years of studying the site. Of course, no-one knows precisely why or how Stonehenge was constructed and that’s a fact that the museum doesn’t try to avoid.

One of my favourite features was an oval-shaped corridor with video-walls on either side. It was setup as if you were standing within the stone circle and, as the video plays, you can witness the history of Stonehenge, from its inception to the present day, all through the seasons; night and day. 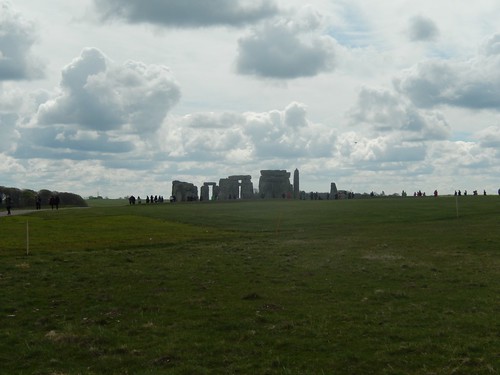 It must’ve been 10.30 to 11.00 by the time we hopped on the free shuttle bus and made our way towards the main attraction, via a two-minute journey. 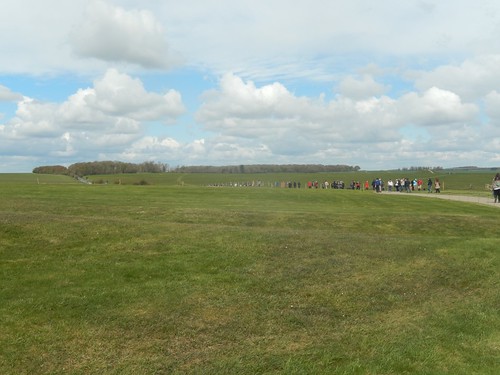 As you would expect, it was busy. In case you haven’t previously read up on the site; there’s a fence that prevents visitors from treading within so many metres of the ancient structure. This is understandable, with fears of erosion and the sheer popularity. Although, I understand this law may be relaxed during times of the Solstice, in both summer and winter. You’d probably have to fight through hoardes of people and pagans to get close to them, though. 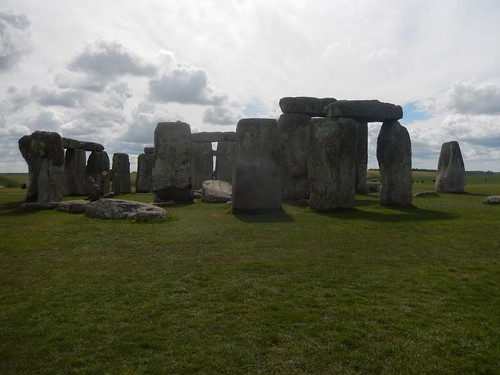 There were a couple of other surprises awaiting us, as we got as close as we could… 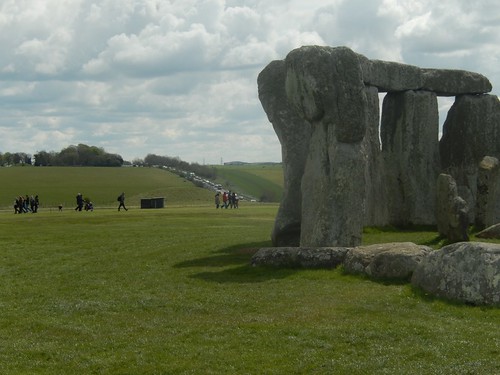 Firstly, the A303. It really is staggering just how close that road is to the stones. I’ve heard of and read about various proposals for an alternate road – even one that cuts through the hillside – to overcome this and the continuous threat of pollution. Whatever solution is reached, I do hope it is for the best of all concerned, especially our heritage site. 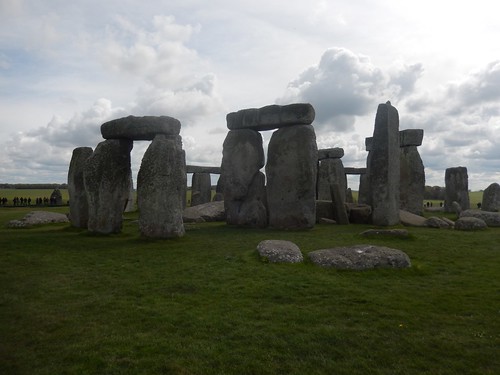 How do you perceive the size and scales of Stonehenge from my photos? 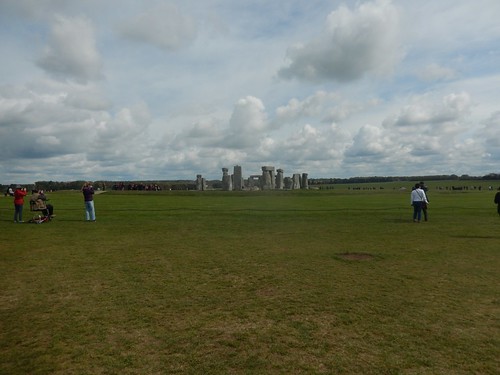 We both agreed that it was a lot smaller than we had anticipated. In every photo or video we’d seen, these stones look huge. Perhaps it was a matter of perspective, as we looked one from the perimeter fence. These stones, although not small in any sense, seemed to be so very close together. 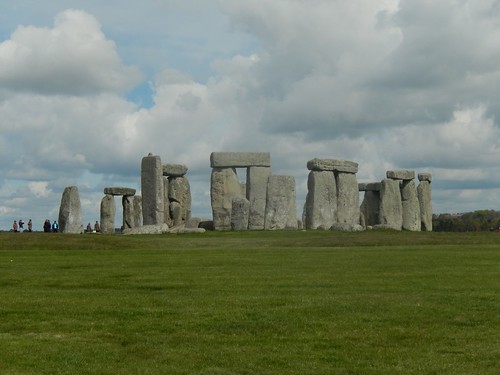 I don’t wish to take anything away from it because if you’ve wanted to go, as I had and the opportunity arrives, I would always encourage you to take it. Otherwise, you’ll never know for yourself. 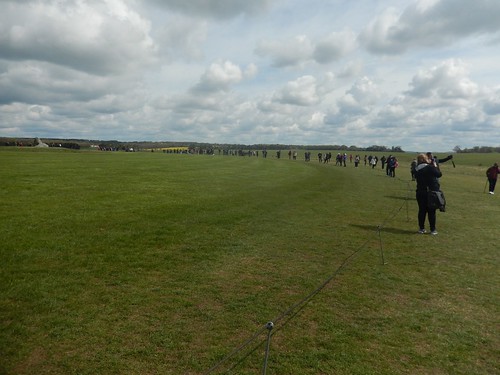 I do like how the boundary fence is neither threatening or intrusive. It’s unnoticeable from a distance where, as some of my photos may show; it does look as though people are closely surrounding the henge. 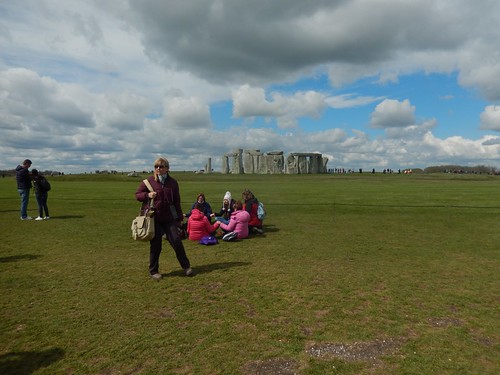 I could not say that I felt anything ‘magical’ and there were no ‘energies’ that I was physically aware of. But that didn’t stop want small group from sitting down to meditate, perhaps chant as well. Interestingly, they positioned themselves between the stones and the A303. 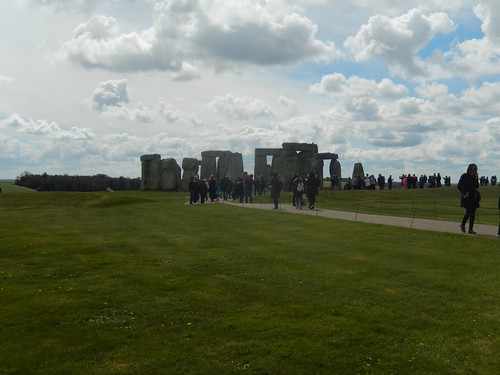 After taking more than enough photos, we moved on to explore more of the local landscape. I’ll include a link to my full set of photos at the end of this post. 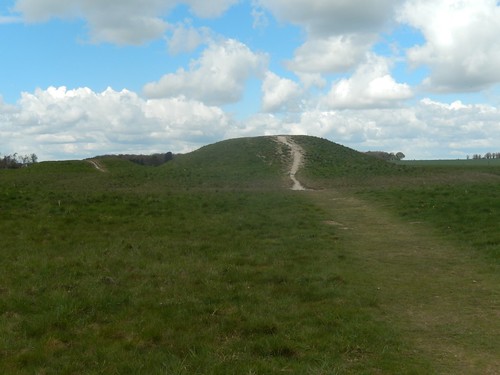 Avoiding the coaches this time, we walked on towards the barrows (tumuli) just north of the main attraction. It was quiet, tranquil and scenic with only a handful of others nearby. 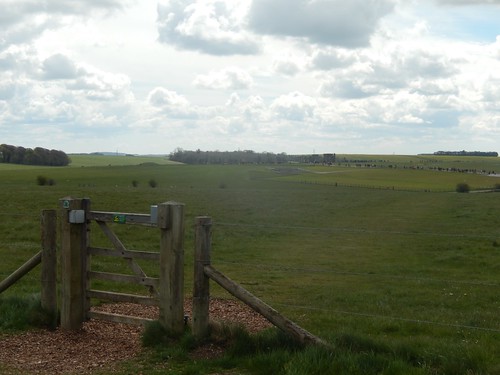 You can just make out Stonehenge, right of centre in the photo above… Yep, it really did seem small. 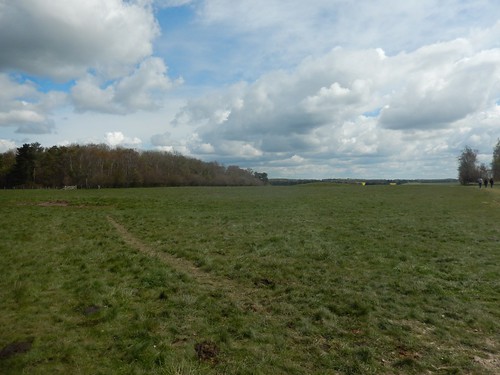 On our scenic route back towards the car park, we did also pass the site of an ancient (very) long barrow known as The Cursus; barely distinguishable today, other than for the faint outline of the original ditches.

As we came to leave the site and head on to the next part of our day-long adventure, I found myself asking this one question…

Can you visit Stonehenge without paying?

If you’ve not been before, I would encourage you to pay for your first visit as some of the money will surely go towards the protection of the site. 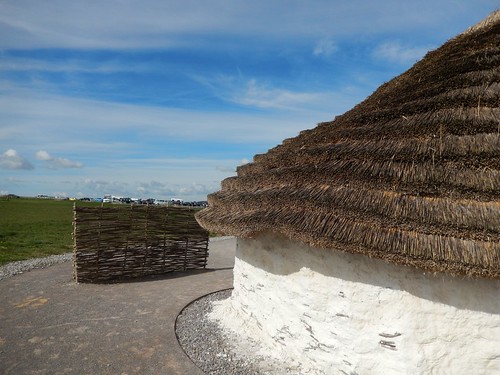 As we walked towards the car park, I couldn’t help but notice there was nothing to prevent visitors from walking around the museum building and the admission kiosks…

We took the bus to the stones from the museum but there’s a walking route, parallel to the road, which is easy to follow. There is no charge for car parking, as I mentioned earlier…

Studying the screenshot of an OS map above, you can see a public byway running north to south across the landscape. Two parallel lines running west from the centre represent the route the coaches follow to and from the museum. Furthermore, the whole site is encased within the orange border that designates it as Access Land…

I’ll leave it open for you to decide. I’m now pondering the question – is it possible too freely visit Stonehenge at night?! Somewhere along the lines, there must be some form of security of restriction of access… Surely? 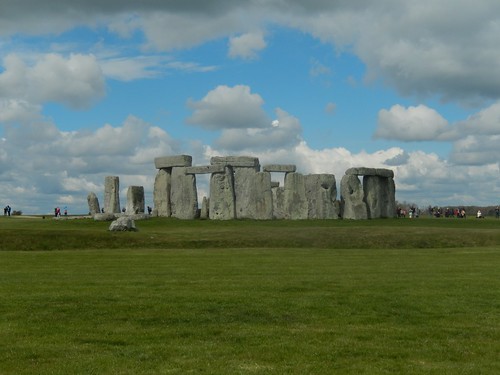