From the edge of the holiday park where we had stopped for lunch, there was but a short distance before we would reach the village of Doniford. 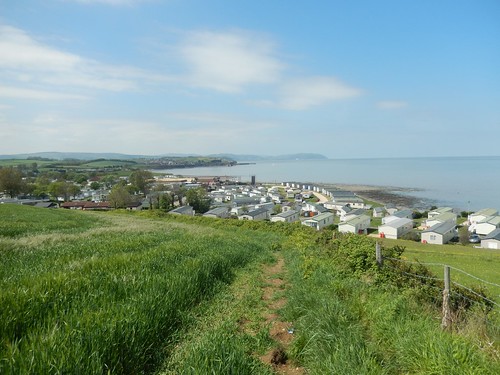 Soon after that, we’d be returning to a walk that lies directly beside the sea. 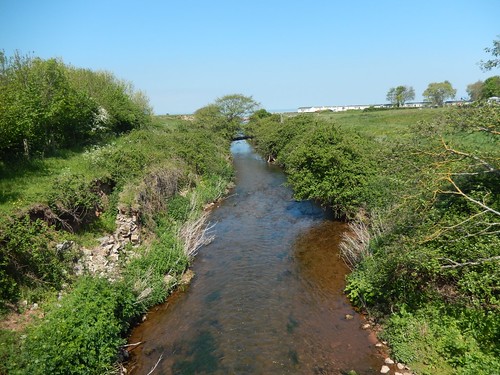 Here, the England Coast Path follows the southern boundary of the holiday park, leading you a good few hundred yards away from the coastline and up on to a frequently used road, cutting through the village. 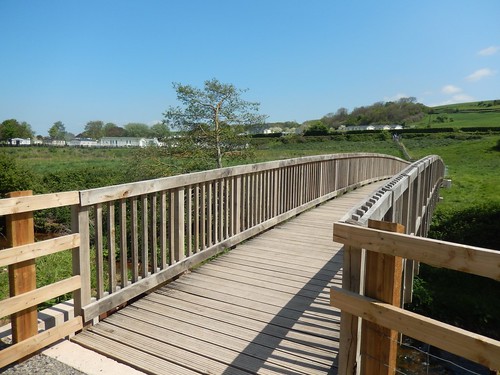 There’s a significant bridge to lead you over The Swill before a brief encounter with the road, passing Doniford Farm on the right. 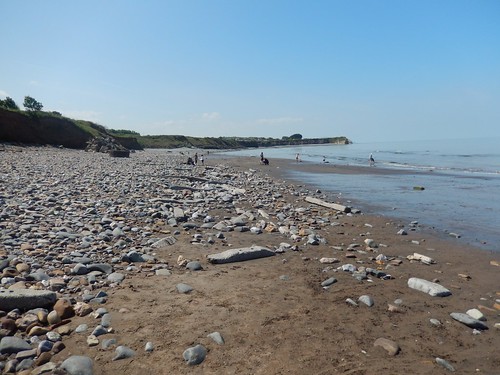 Another decent led us down to Helwell Bay – which I’ve also seen referenced as Doniford Bay. 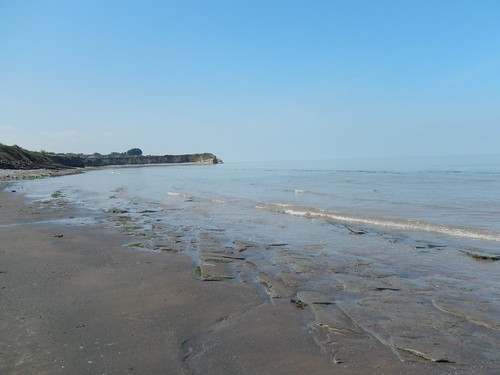 While pebbly like the others in West Somerset; this beach also included the more traditional sand and mud. There were more people about (mostly Brummies, from the accents I could gather) and it would quickly become my favourite stretch of beach of all we had thus far witnessed on our grand adventure. 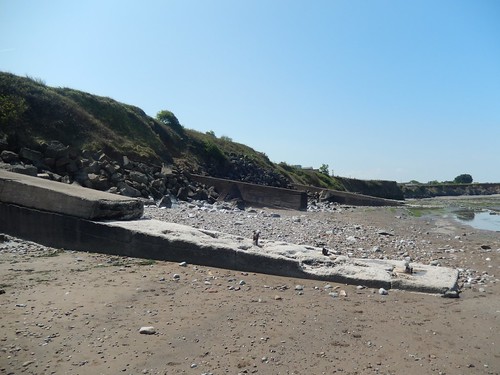 Large piers struck out from the shallow cliffs to our left. Were these used for the mooring and boarding of boats, at a time when the water level was once much higher?

We talk about global warming and the threat of rising sea levels today… But it’s also well known that much of the Somerset Levels was under water at one time; leaving a few known ‘isles’ sitting proud above the sea. 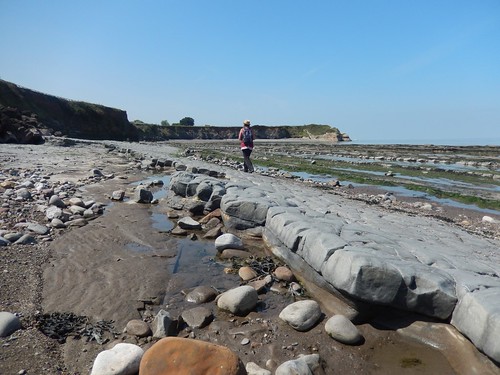 There was quite an adventurous landscape to this bay. From pebbles of varying size, we crossed what felt like dry clay up on to rock walkways spanning the length of the coast. A stairway leading up to the mainland could be seen before the end of the cliffs. 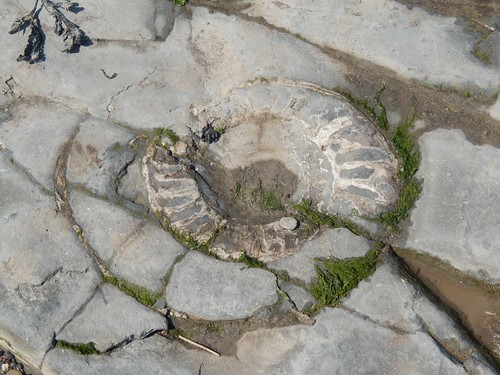 Beneath our feet was an abundance of fossilised ammonites – the same extinct sea creature that adorns every marker along the West Somerset Coast Path. 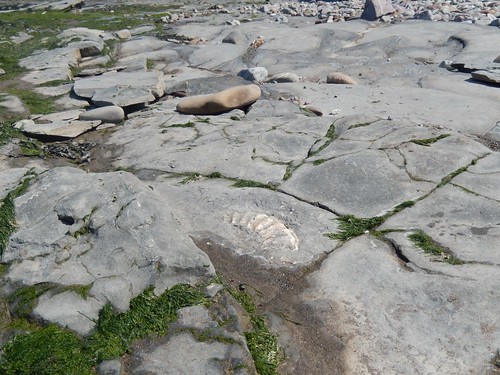 Helwell Bay may represent the best examples of these prehistoric fossils along the entire Somerset coastline… We quickly located half a dozen within a square no more than two-metres.

But again; the warnings of mud and high tides are not to be ignored. Still, this is something we could’ve missed out on altogether, had we walked this route several months earlier and followed the original line of the West Somerset Coast Path. 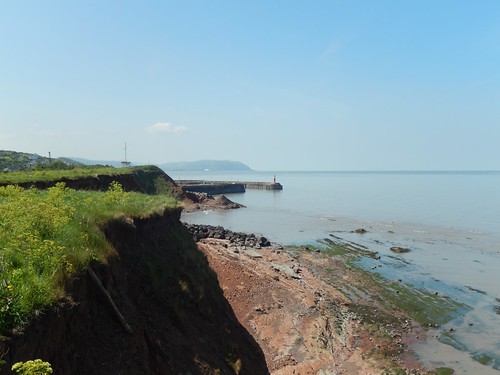 Making our weary way up further steps, we could see the lighthouse of Watchet Harbour. 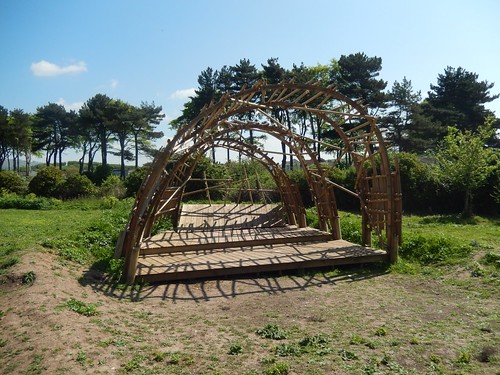 Before all of that, was this wooden structure at the brow of the hill. We’d overtaken two dog walkers to reach this part and didn’t want to linger too long examining it, or else they’d be on our tails in no time. It looks like a space that might be used for performances… Or, is this another expression of “art” in rural Somerset? 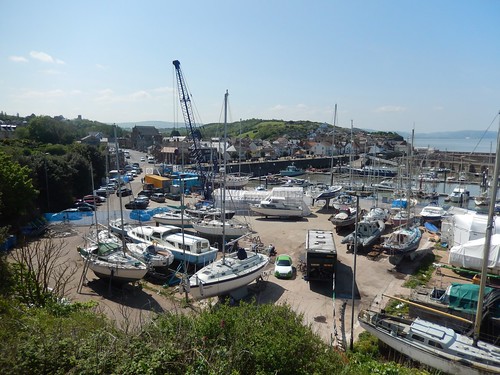 We started off on a direct route to the lighthouse, before reading that the footbridge across the water wasn’t open; instead allowing pass to pass to and from the harbour. 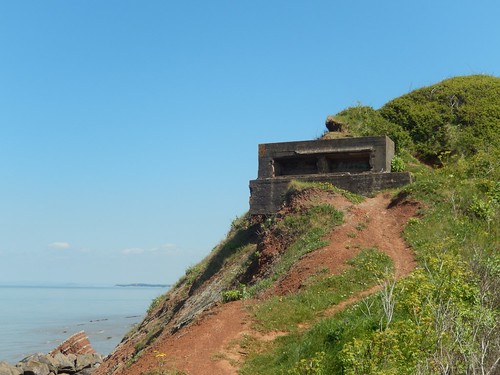 Behind us, contained partially within the cliff face, I spied another fort – similar to those you can find at Brean Down. I think we’d officially left the England Coast Path by this point but we would soon retrieve it. 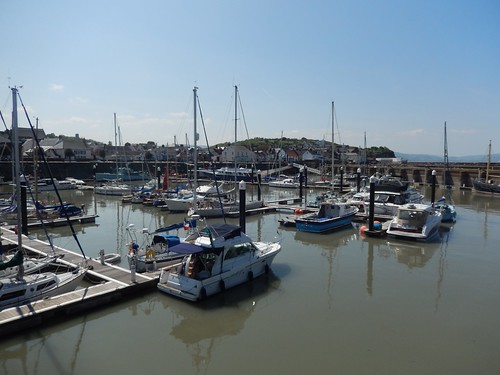 From what I remember reading during the drive down here; Watchet is an historic harbour town, dating back now to over one-thousand years. 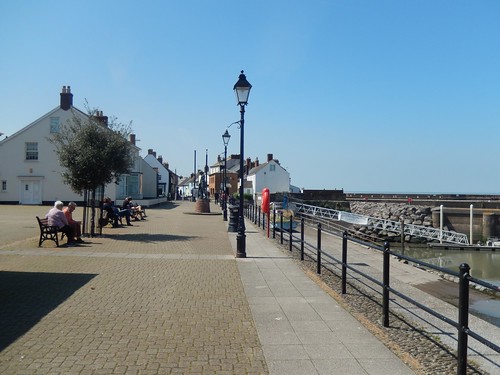 Without any clear sign of toilets, we continued along the promenade, avoiding the temptation of locally-made Exmoor ice cream to our left. We also missed the lighthouse. It would’ve required only the slightest of temporary deviations but we could always come here again – fully aware that every car park I’d seen was definitely for pay-and-display or permit holders. 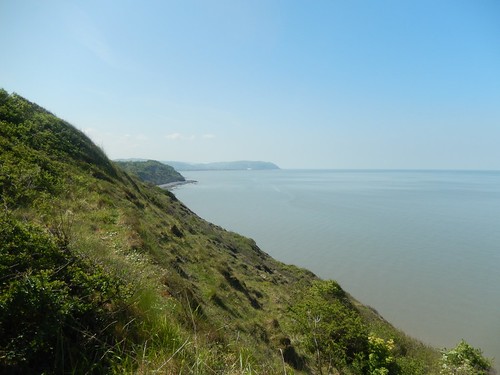 We were now walking alongside the road that had lead us here that morning – from the A39, down through Doniford, with Blue Anchor up ahead. Soon enough, the pavement disappeared and we were catching up with small groups and pairings of other walkers.

It’s a bit of a shame to have to follow the road at this point – and, I’ve yet to mention the fact that we were climbing uphill – but with nothing more than a sheer drop down to our right, there is currently no other option, as far as continuing a coastal walk goes.

Tired from the pound of feet, with heat drawing up from the road beneath us; we arrived at Daw’s Castle enclosure – an area of land now cared for by English Heritage. 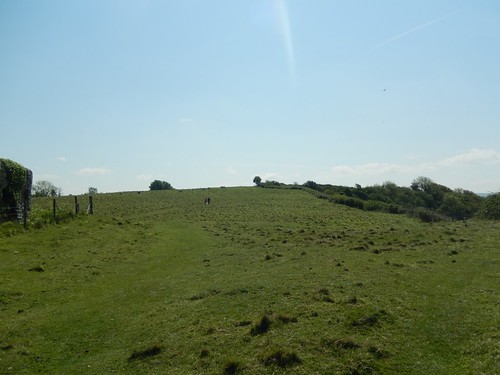 There were no remains of any castle to be seen upon the high point but we were greatly relieved to be away from that road. 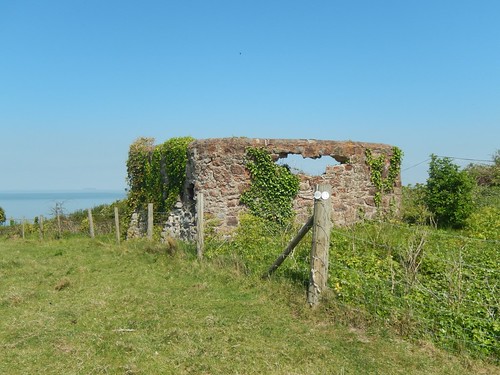 From here, we’d have to pass through two separate camp sites within quick succession of each other. 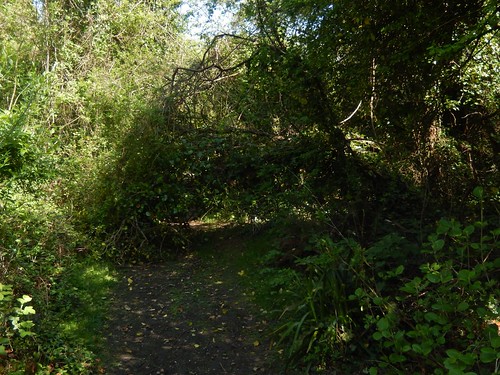 Between each, a woodland path offer brief respite and shade from the pre-summer sun. This one fallen branch was but a minor obstacle on the otherwise clear path ahead.

Where we had followed a guided path along the outside of the first set of caravans; the coast path led us directly in to the open space of the next, half-filled with tents and campers alike. Keeping our eyes sharp, we spotted the next exit down to our right. A short distance, briefly interrupted a couple of parked cars.

I’m sure there are laws against camping (and parking) on footpaths but then, both of our entryways remained clear and the path wasn’t clearly defined on the ground. 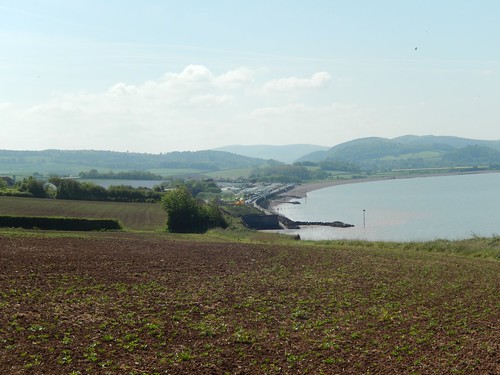 Through another patch of woodland and we saw it; Blue Anchor and beyond. 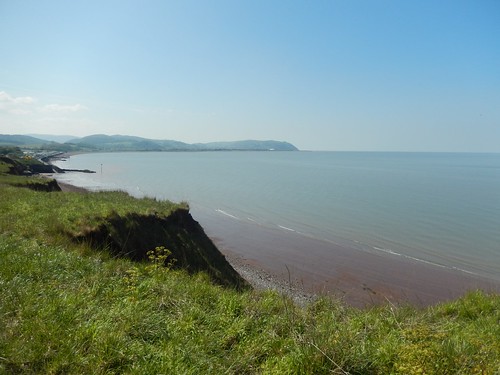 From this vantage point, you could make out Butlins at Minehead, with North Hill just beyond. Much of what will follow that, I’m already quite familiar with. Between here and there though, remains largely unknown. 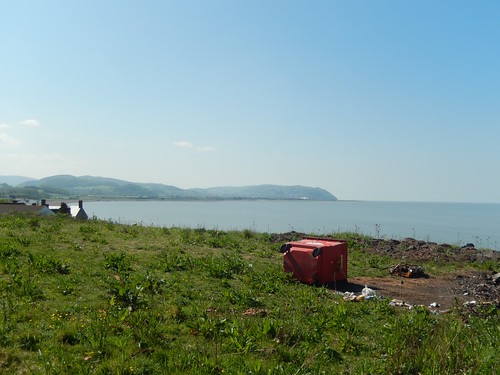 In an effort to spoil the view, a large wheelie had been upturned and its contents allowed to spill over the vacant land. With a pair of soiled and static caravans some way to our left, it didn’t feel like a space in which we would like to linger. 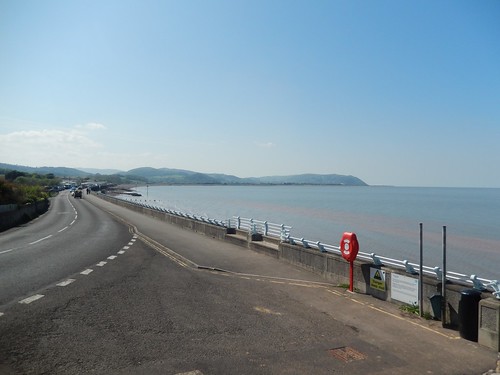 Returning down to the road, it was but a short walk to my car. Arriving early in the day as one of only a few cars to be seen, I nabbed a space close to the ‘unattractive’ toilet block, just in case. By now, almost every space along the coast road had been filled, with less considerate drivers stacked up alongside the pavement, which only increased traffic congestion on a day where a car boot sale was taking place.

As I’d arrived in the morning, I’d seen caravans parked at the roadside and not in one of the designated bays… Granted, there are no double-yellow lines or apparent parking restrictions… I also realise that caravans are large and maybe struggle fit in to one of those diagonal bays… But there’s no excuse for the ageing male in his BMW convertible, parked up with his baseball cap on tight, waiting for whatever it is that these stereotypes do… 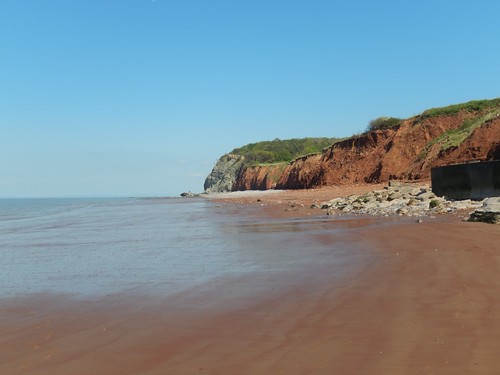 Before returning to the oven-state of my car though, we descended right, down to the beach. 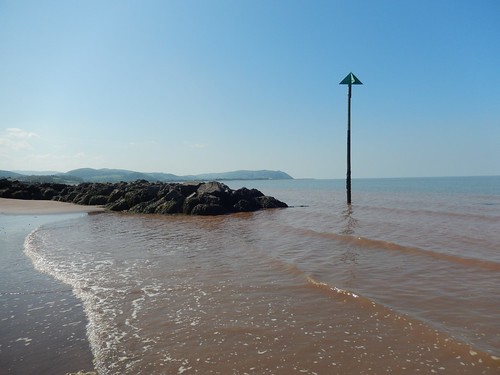 There was sand… Lots of sand. It was firm under foot and Anna showed me how you could see the excrement left behind by the sand worms. This eastern end of the beach was deserted [whether the worm-poo was responsible or not, I do not know].

I would assume that you can follow the sands west to the other end of the bay, then climbing back up to the road. From here, it was populated with kids and adults alike. As our next instalment sets off from this point, we may well attempt it, in preference to following the road. 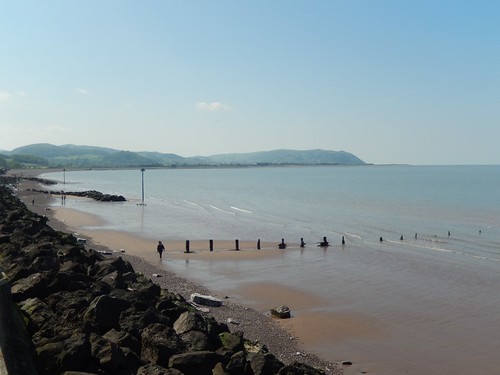 From here, we have somewhere between twenty and thirty-miles left to walk [depending on which website you use to measure the distance] until we reach the end of the Somerset Coast Path… With the lengths of driving involved to and from our homes, that’s the equivalent of two more walks. Then, we’re at the border with North Devon.

In some ways, I feel sad that it will soon be completed… In others, I recognised that I am glad we did not rush through it all last year… To Minehead and beyond!

Total distance of this walk = 11 miles