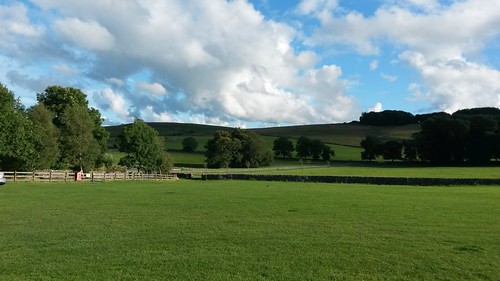 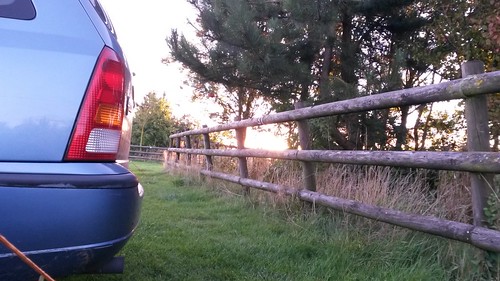 That day I arrived was memorable – largely for the fact that the heavens had opened from the moment I passed Birmingham whilst travelling north up the M5 motorway. From there, it didn’t let on; turning off near Stoke-on-Trent and onwards through Derbyshire. Anticipating a wet and ‘inconvenient’ start to me first weekend in the Peak District; I decided to detour to the nearest town for a few hours, in hope that the rain may pass and that the ground remain suitable for pitching my tent.

Otherwise, I had thoughts of spending my first night (if not the whole weekend) in some kind of hotel… I can look back now and say I’m very glad that didn’t happen! 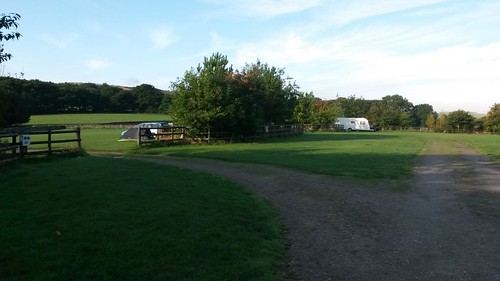 Shallow Grange, like many camp sites, is situated on a farm. From memory, Chelmorton was only a ten-minute drive south from the spa town of Buxton (where I spent that first afternoon) and then no more than thirty-minutes of driving south to the Derbyshire/Staffordshire border at one end of the White Peak.

Although I didn’t get to visit it last year, I do imagine that Kinder Scout (in the Dark Peak) is only another twenty-minutes of driving to the north… In all, it’s a pretty good location, I think, for a rural weekend getaway without being too far removed. 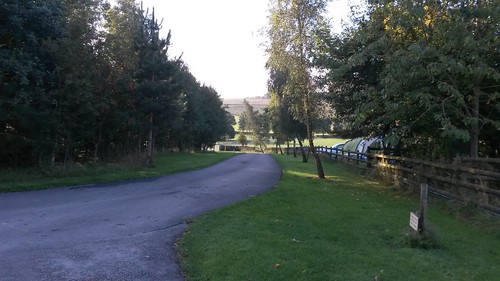 It was quite a modern farm and appeared to be very well looked after. As I reached the reception, I met the very jolly female owner of the site who even handed me a map of the site. From there, it was a short drive around to the camping areas. That was when I discovered one of my favourite aspects of this camp site, as a (mostly) solo-camper… The gateway is operated by punching a number in to a keypad. You do not have to leave your car to get in!

That was one of my only gripes about Westermill Farm in Exmoor – although, I doubt too many others go camping alone. 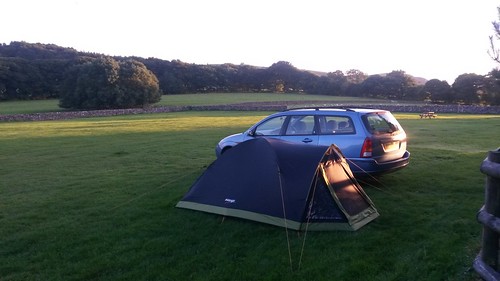 I’m still slightly confused by this but there were two fields for camping… One was for tents only, with the other, higher up the hill, being reserved for those who had paid for an electrical hookup.

One criticism I’d read beforehand was that the ground here is on a slope… In all honesty though, I think I’ve only been to one camp site in the past two years that was reasonably flat! As I arrived, no more than half-a-dozen others were already setup around the perimeter… Being on my own and with a tent no larger than the car that had bought me here, I felt somewhat intimidated [while also, relieved that I did not have to share this “two man” assembly]. 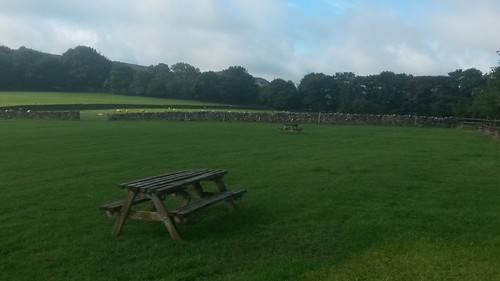 Another popular complaint was that the site is fairly close to a busy B-road… I didn’t find the passing traffic to be too disruptive. Really, you’d think someone would be able to anticipate that from looking at a map. I don’t know. I always have ear plugs for the nights and don’t tend to spend too much ‘day time’ around my tent. Personally, I find coughing and ringtones to be more disturbing to one’s weekend away.

There were recycling facilities near by and the toilet/shower block was only a short walk away beside the caravan area – that was one of my personal highlights; how the majority of all caravans were situated a fair distance away from the tents [read: real campers]. It was a refreshing change compared to past experiences. 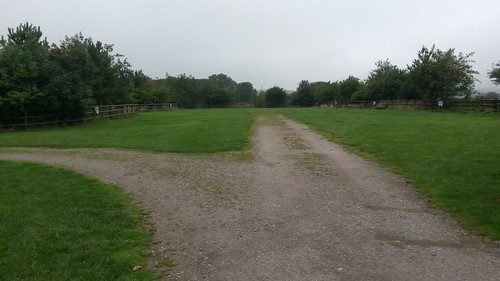 I quite enjoyed nipping to the loo or wash up in the evenings and noticing the TVs glowing in several of the caravans.

Along with the toilets, I did find the courage to use the showers here. They’re a cubicle-style that you might find in one of many other sites and, best of all, there is no charge or token required to use them… Currently. Signs stipulate that they would prefer you to be ‘economical’ with your water usage so that they do not have to ask you for money in future. Their taps have a push function – you push the button and warm water flows out for, say, fifteen seconds… To get more water, you would have to pump it again but I was conscious of doing it to often, with the wishes of the owners. This toilet/shower block was also cleaned daily. 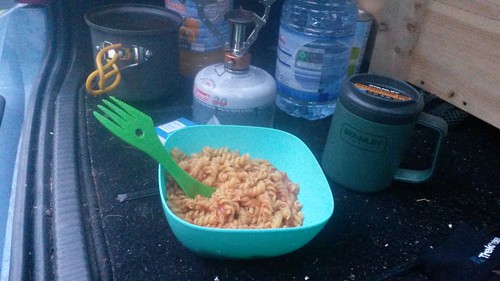 Most of my meals were served from the boot of my estate car. Yes, you’ve seen my tent! As this was also mid-September with the nights drawing in before 21.00, I often found myself succumbing to the back seat of my car for dining. There were a few picnic tables strewn around the field and without packing any furniture of my own, I made my choice. 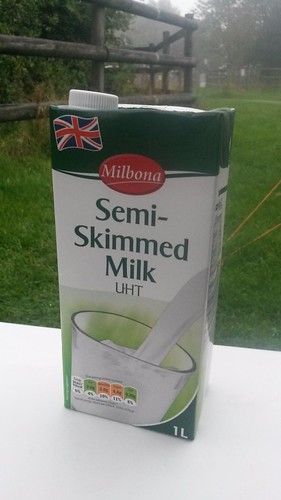 Speaking of food – a took a carton of UHT milk with me after a friend’s advice and it lasted well through the full three-nights. Instead of water or powdered milk, I was able to enjoy the real stuff with my porridge and tea each morning. This summer, I’ll be keen to see how long UHT milk might last under warmer conditions. 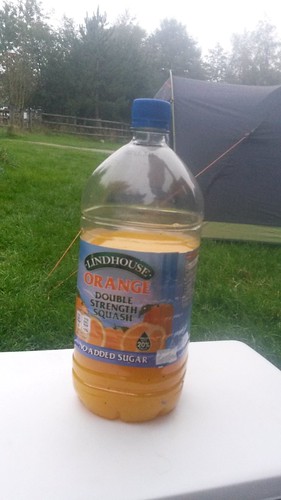 I seem to remember there being a tap for drinking water close to the edge of the top field and, also for the first time, I took a large bottle of orange squash with me – I drink it so often at home yet, I had never considered it may be ideal for camping trips. 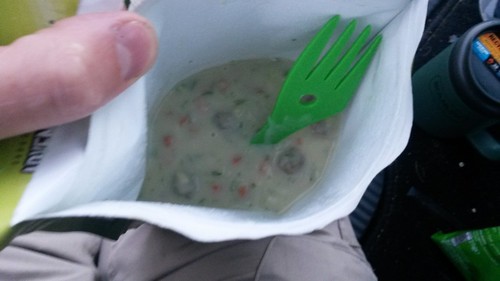 When not boiling pasta, I found myself pouring boiling water in to a saché to create an ‘Adventure Meal’… At £5 per bag, I wasn’t sure of what to expected. But, my beef hotpot did taste very much like beef! It filled me up and I still had room for the sticky toffee pudding: 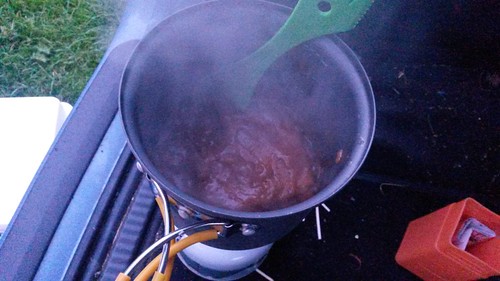 Although, I think I had to place the bag in a bowl of boiling water, for this one. Sadly, the taste wasn’t worthy of the mess it made to my pan. 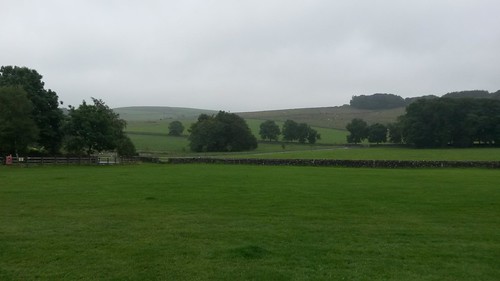 My first full day on the camp site, leading up to my second night, turned out to be drier than had been forecast and I was able to enjoy a good walk around Dovedale. Returning to the camp site that evening; I found the majority of others had already departed… This was Sunday night and, but for one other tent, I’d have had the place to myself. 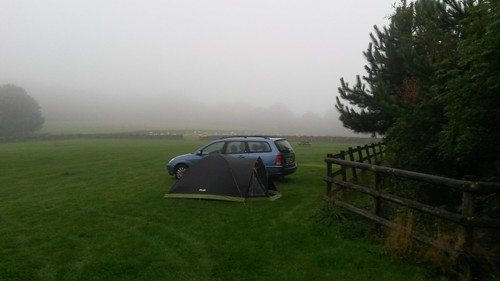 Twenty-four hours later and, on my final night, I slept alone in that field. 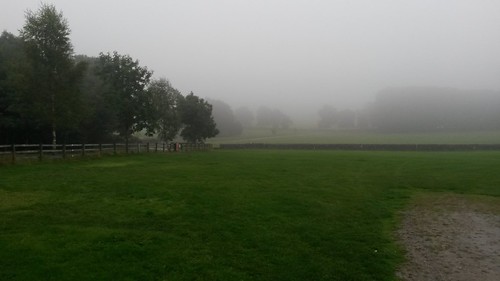 I felt privileged and very grateful for the experience. My first time camping for three consecutive nights on my own and I got to spend it in near solitude, without having delve deep in to wilderness. It was cold and I didn’t fancy the three-hour-plus drive home that would follow the next day but I could find contentment in that moment. 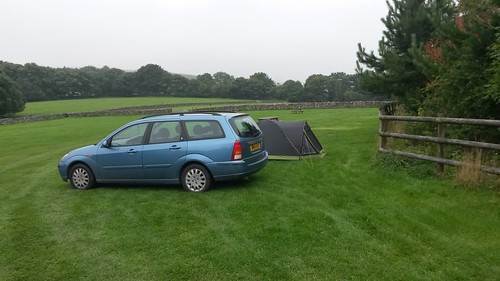 So, I enjoyed my stay at Shallow Grange and would happily recommend the site to anyone thinking of visiting the area. Perhaps I’ll even head there again later this year, should I take an opportunity to explore the Dark side of the Peak District.

I hope this helps and thanks for reading.