It’s not that often I go walking on the very hills that are only a stone’s throw from my home. But having suffered with a cold for the past week, lying low on energy levels and having hurt my back; I didn’t feel like travelling or walking too far. 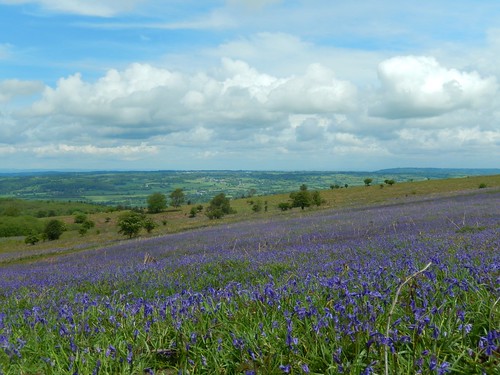 Starting from Burrington Combe after a ten-minute drive, I was to embark on a unusually short adventure up and over the Mendip Hills. 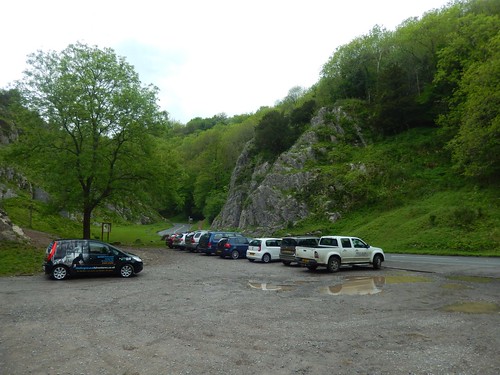 There are at least three recognised car parking areas at lower end of the B3134. Quite often, you’ll find the first one is as packed as the one at Burrington Ham – but, I imagine to steal the last parking space in and amongst the cavers and climbers who had set off for the day. 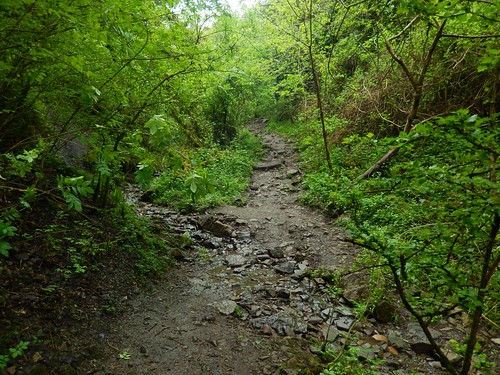 I don’t know exactly what I did to hurt my back – it’s more than likely that I did something to it at work a few days earlier but that the effects weren’t to be known until after I was dressed on Sunday morning… It is concerning, as this seems to be happening more and more frequently. Although I’m in less pain today, I still awaken with that same ache. 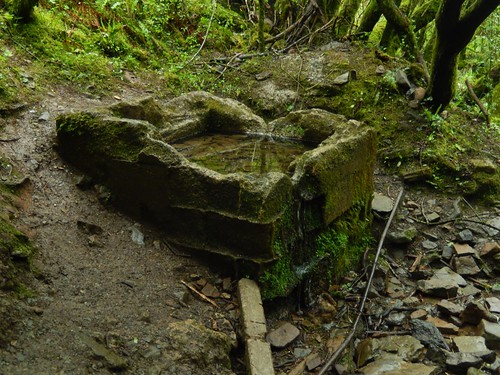 I also suffer with some kind of heel and ankle discomfort on my right foot, which I also believe is a consequence of what I do and where I work… If I was to see a doctor, I imagine they’d tell me to ‘rest it’… Even if I took a few weeks off from walking, I’d have to continue standing and exerting force on my foot at work, being right-handed.

From the car, my walk began by following the roadside footpath that many people seem to follow up to the hills and caves. This path soon leaves the roof to head gently up the hillside, soon joining up with a stream that flows quite fully in winter and can affect one’s navigation of alternate paths beyond the obvious… That’s why I had previously missed the features you see here, which I hadn’t seen for about fifteen years. 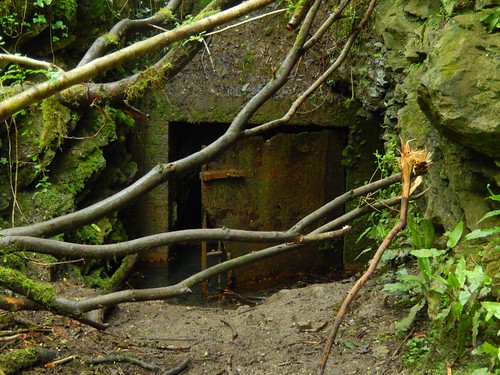 My memory suggested this door was locked shut the last time I was here. I couldn’t remember it being flooded and the bank of earth in front was unfamiliar.

I’d assume it was used for caving and mining access, many decades ago. No doubt, people have been inside more recently. 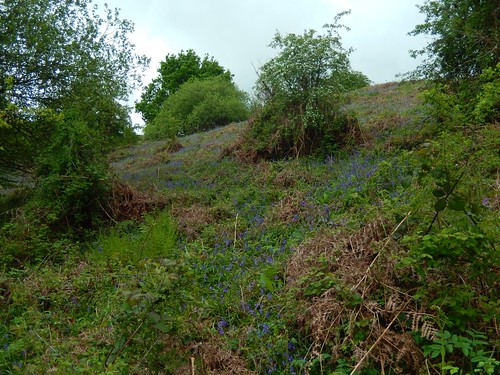 Taking another less-familiar path up to the right, it was a steep climb to the top, where I was surprised by the emergence of bluebells up ahead. Of all the places to find them at this time of year, I had never considered the Mendip Hills. Although, this patch of Black Down is fairly wooded. 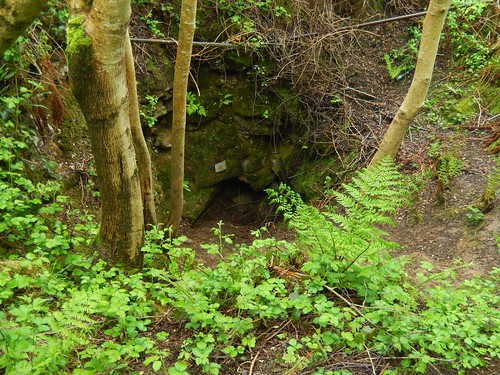 I’d equipped an OS map within my bag but had decided only to draw it out should I find myself feeling completely uncertain of my bearings… Black Down, I find, is fairly easy to navigate freely if you’re not looking for pinpoint precision on your walks.

I’ve always known there are several cave entrances around here but I rarely come across them, even with a map in hand. My senses led me to a narrow descending path with one of them at the bottom (see above) – I didn’t waste any energy or risk further back pain by descending all the way but I would guess it might have been Rod’s Pot but I might be wrong… I had already passed Sidcot Swallet on the way up. 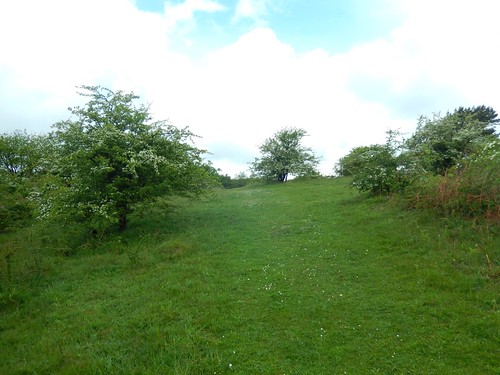 Now, my walk would continue a short distance west to Dolebury Warren; one of several historic hill forts in the region.

Without a map and compass, you’re basically walking towards the woods. To find Dolebury Warren, you need to know that Rowberrow Warren contains the ‘very tall trees’ [I know] and the Dolebury is off to the right, on its northern side.

Rather confusingly; there’s also a small hamlet known as Doleberrow nearby! 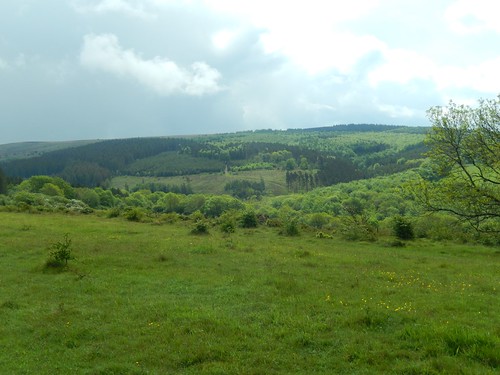 From here, the paths were familiar as I began to climb up and over the hillfort. Looking back down to my left, I noticed a patch of trees ‘missing’ from Rowberrow, which seems to increase in size, each and every year. 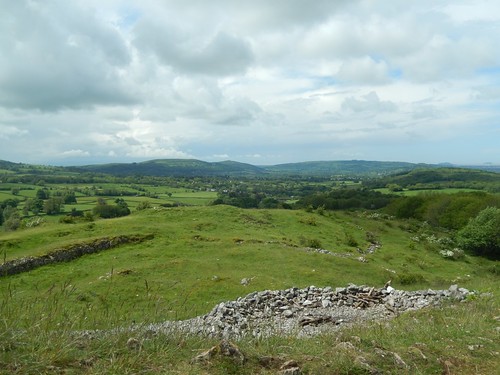 As I reached the high point, I wasn’t alone. But the dark clouds that had carried fifteen-minutes of rain overheard had since dispersed to the east. I got my usual viewpoint looking towards Crook Peak – Dolebury, being one of my favourite high points on the Mendips. 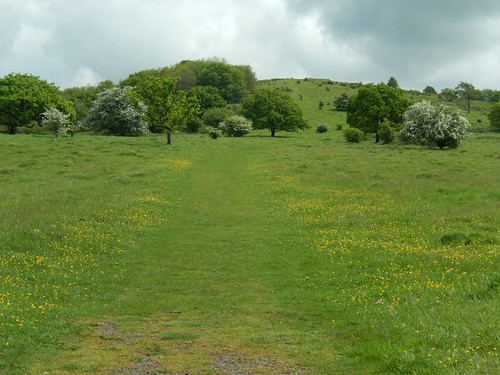 I stopped here for a little while, to take everything in while a couple of small Ramblers groups came and went. 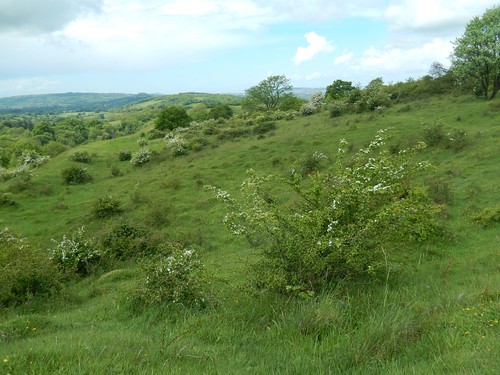 Feeling somewhat refuelled, I continued, in an anti-clockwise direction, along the heights of the raised earthworks, here. On its northern half, you’ll find the terrain to be quite rocky and tough on your ankles. Around the south though, it is far more pleasant and I passed another group of outdoorsy-people paying close attention to the plants. 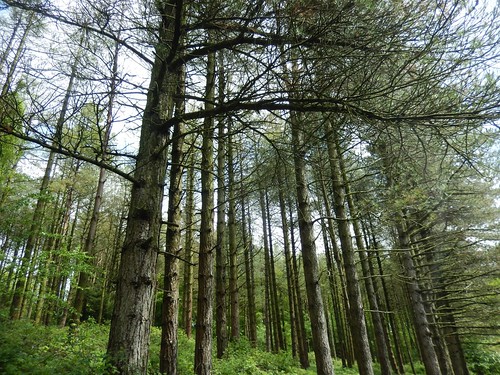 As Dolebury Warren is largely open access land, I continued my walk along its southern edge, soon passing through a series of stiles and kissing gates to arrive at Rowberrow. 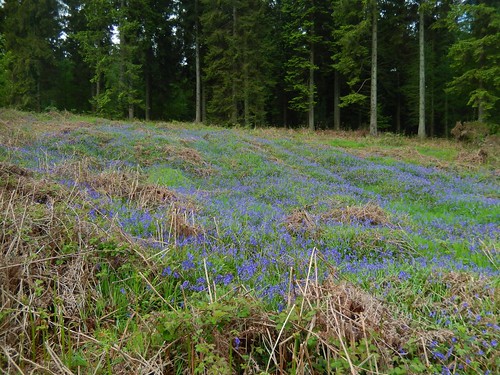 Following a bridleway signed for Black Down, I again found a surprised flurry of bluebells.

Overtaking a young family, I arrived at a crossroads, where I decided to climb straight on up through the Warren on a steep and rock-lined path (one of the reasons I don’t personally favour walking through these woods). This would lead me to a higher entry point on my return to Black Down where, yet again, there was a sight to behold ahead of me: 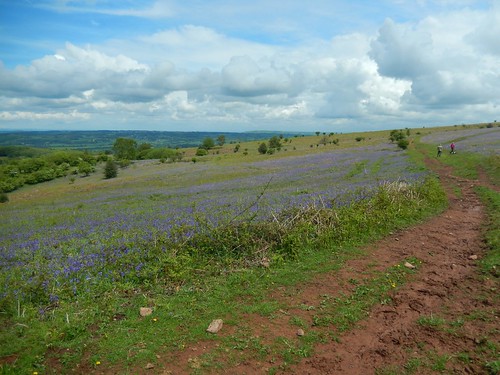 A couple of weeks ago, I spent my Friday evening walking around a patch of woodland elsewhere that is well known for bluebell activity at this time of year… 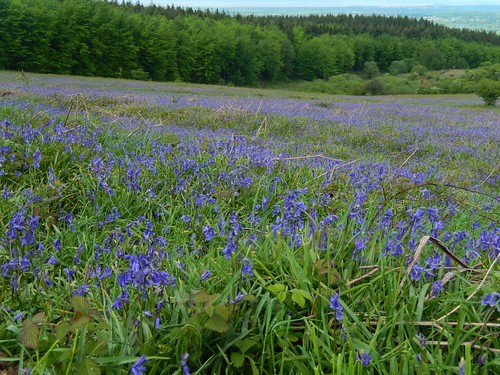 Never in a million years, would I have expected to find so many up on Black Down. I can see this land from the village I live in! 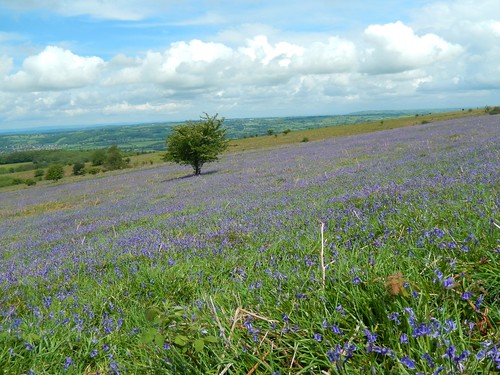 It was quite special and, on top of that, I didn’t have much further to climb before I arrive at the highest point on the Mendip Hills. 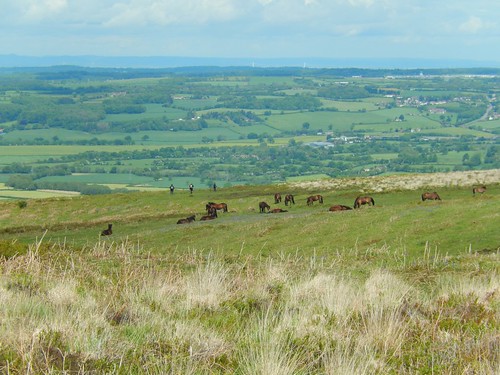 November was the last time that I had walked here. Back then, work was underway to backfill some of the most-frequently-used paths between Beacon Batch and Rowberrow. 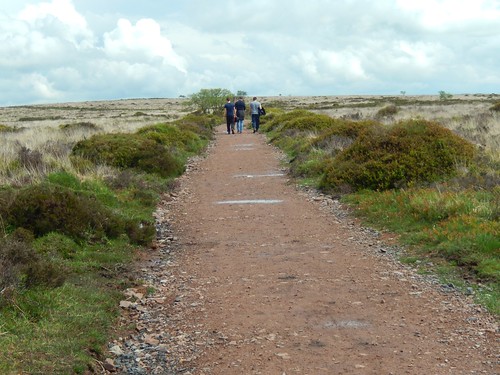 As I caught up with a group of boys I’d passed at Dolebury earlier, I got to follow this restored path at a comfortable height. It was no longer the V-shaped trench I had come to loathe and let’s hope it remains this way. 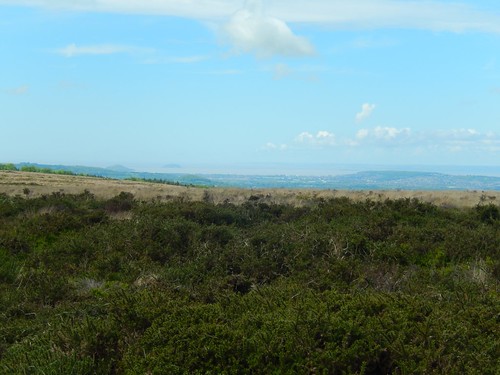 Beacon Batch is 325m above sea level and, as I sat down on the mound that houses the trig pillar, the wind picked up enough for me to dig my coat our from my bag again. 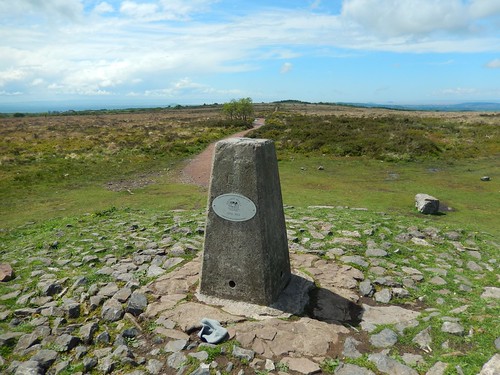 By the time I’d finished my lunch, the boys had dispersed and I was free to take the photo above. It does look as though one of them may have left their hat behind… 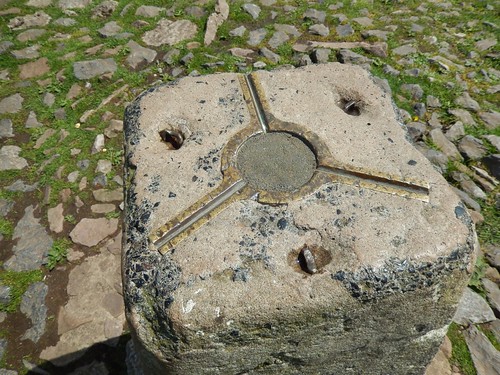 It also looks as though this pillar has been filled in at some point. 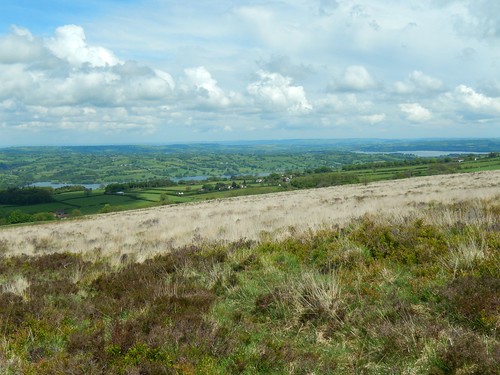 Nearing the end of my walk, I continued downhill, in a north-easterly direction to Burrington Combe. 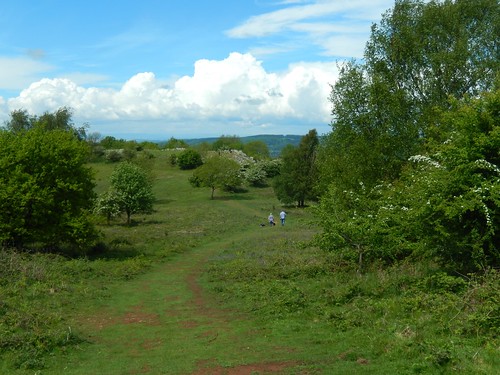 Crossing over and then climbing up to Burrington Ham (ignoring the ice cream van), I found a small batch of bluebells.

From here, there were two choices… Either continue west and down in to the village of Burrington or, attempt to slide down an indecipherable path with scree and an almost-sheer drop to the second car park… 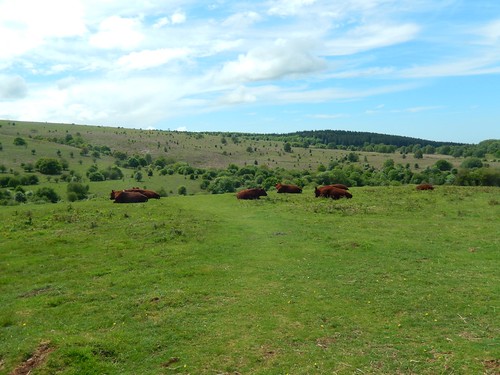 Without referring to the map, I must’ve missed a turn because I was soon approaching cliff edge, with a herd of red ruby Devonshire cattle lying before the continuation of the path. 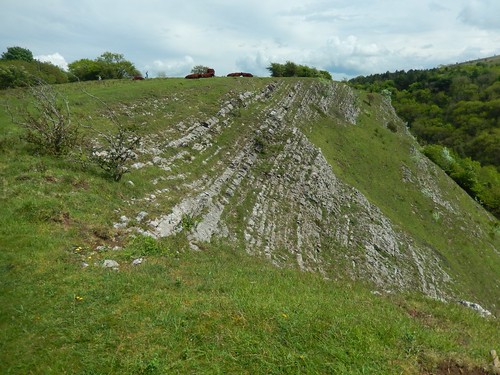 I had merely intended to take the easy route down to the village but, not wanting to turn around with a couple behind me, I continued in search of the drop that is often difficult to find (in my opinion) from up high. 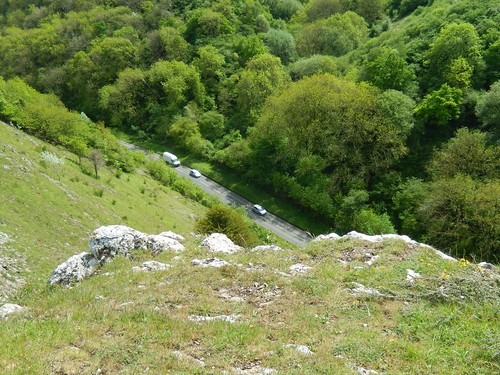 Following the cliff edge was the easy part and the width of the way forward helped me to feel confident. Very soon, that disappeared to a narrow and winding track through the woodland. Avoiding a tumble down through the woods and arriving at what appeared to be a T-junction, I could see and hear the passing traffic down to my left.

This had to be the way… 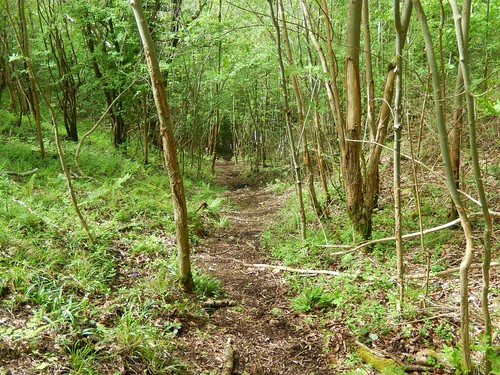 But it was easy to follow, very clearly marked and put me back on the road a few years of east of the path I had always previously followed…

This path would also be easier to find and follow from the roadside, if you know where to find it, right next to Aveline’s Hole. I’ll surely be looking for it on future walks here. 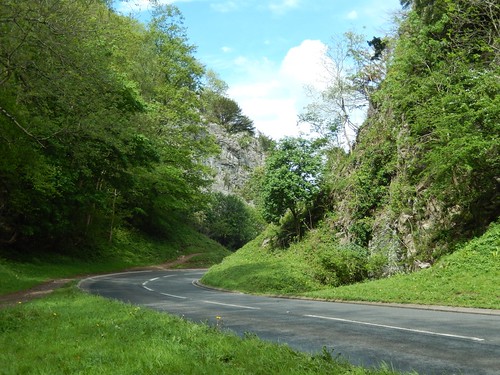 With a bad back, snotty nose and head all bunged up with germs; I managed to walk a good 7.5 miles, which felt fantastic, given my lack of activity throughout the previous week. I’m very fortunate, in that I don’t have to travel or walk far in order to enjoy a good walk.