Halfway way up the B3135 Cliff Road deep within Cheddar Gorge, the 20 Mile Circuit of the annual Mercury Mendip Challenge officially begins at the roadside entrance to Black Rock. 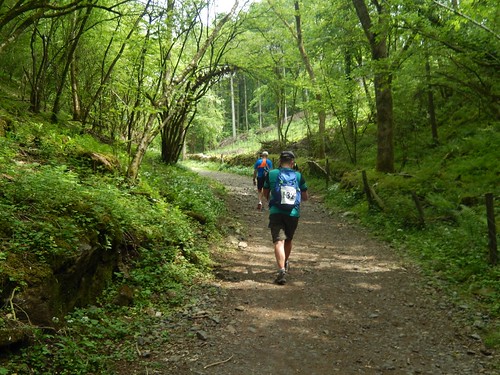 This section forms the first half of the complete 20 Mile Route and does not concern anyone walking the 10 Mile Route. 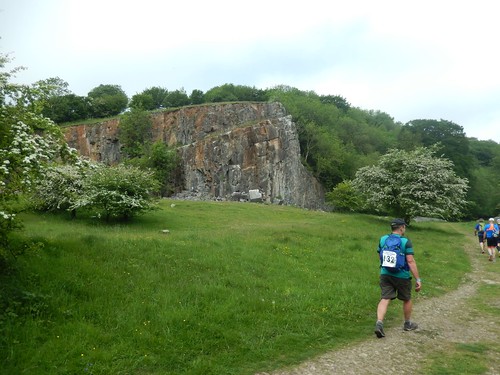 Still following the West Mendip Way; the walk continues along a wide and rocky path that often becomes muddy in the winter months. Passing a limekiln on your left, you then meet what I have always assumed to be the Black Rock.

Warning signs prohibit the climbing of the apparent walkway but I wouldn’t be surprised if people have done it (not during this event, of course). 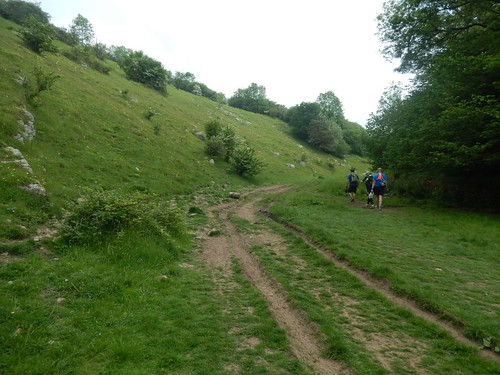 Continuing along the bottom of the valley, the path turns left at a junction with Velvet Bottom and you soon meet with a short but steep ascent from Long Wood Nature Reserve. 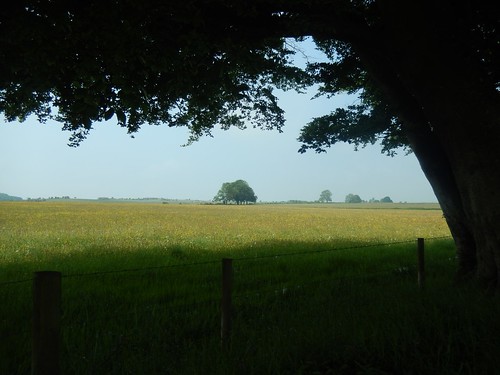 From the top of this climb, the walk again levels out as you cross a large field (sometimes home to sheep) in the direction of a farm track, soon cutting across your view. 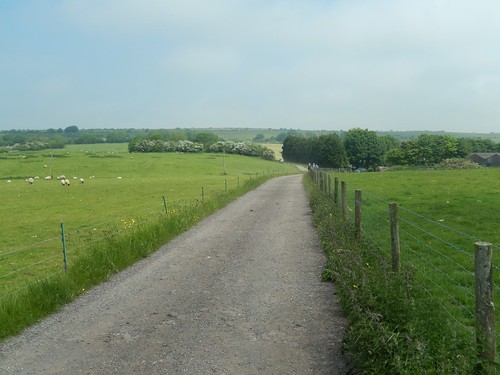 Now, you follow this driveway right, beyond Charterhouse Farm and on to a road that runs between Shipham and Charterhouse. I didn’t spot the waymarker this year (perhaps the hedge had overgrown it) but you need to turn left, heading west, at the road. 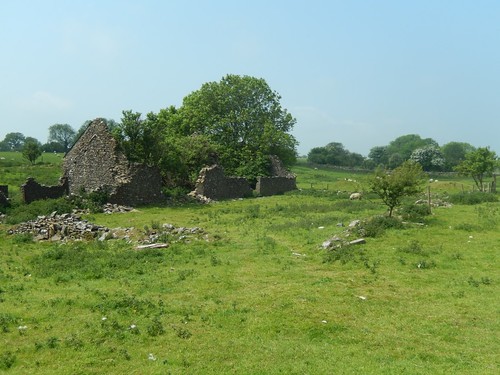 Again, the walking here is level and you’re able to admire the scenery, whilst keeping an ear open for the occasional passing car or cyclist. Where the road eventually takes a sharp turn to the left, you head right, uphill slightly to an optional checkpoint near Tyning’s Farm. 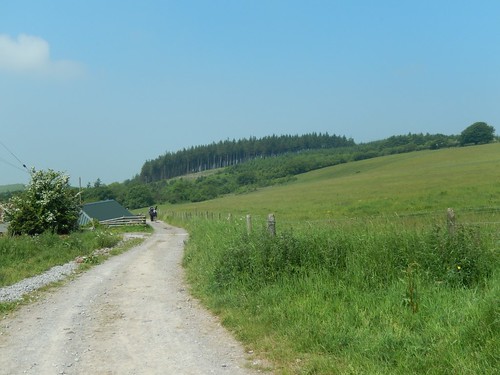 After refreshment, the walk continues westward on an obvious path infront of houses, heading towards a large gathering of tall trees, known as Rowberrow Warren. 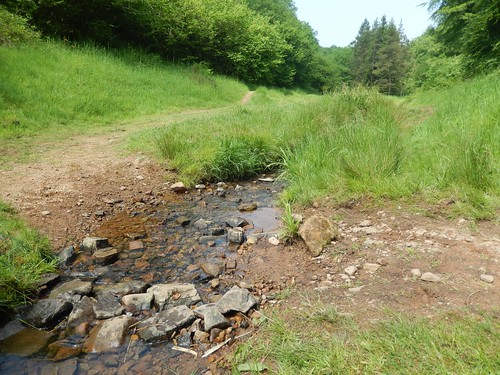 You may find the lack of waymarking for the West Mendip Way to be concerning here. Keep walking in the same direction, without turning left, right or up and you should soon find yourself heading down to this stream.

I got stuck behind a slow-moving line of horses here. In 2014, I even chose this place as a tranquil space in which to stop for lunch. If you’re on the 30 Mile walk then you’re very close to halfway. 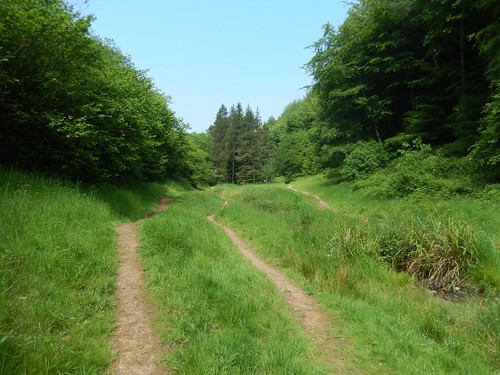 I do find it’s important to cross over the stream as soon as you reach it and I believe the guide also instructs you to do this (unfortunately, I left mine on the coach, this year…). Otherwise, you may miss the steep turn that arrives on your left, where the waterside route begins to bend around to the right. I don’t think it’s specifically signed as the West Mendip Way and I did see people heading off along the other side of the stream, who would’ve certainly missed it, first time.

Unfortunately, I don’t have any photos to support this next bit…

As you join Lippiat Lane from the top of this climb, you continue downhill as far as a pink cottage on your right (which I missed in 2015), where you turn left on the approach to a field. Here, I believe the right of way follows the northern edge of the field before turning south at the far end and entering woodland. But equally, I’ve seen people stick to track that remains high across the land… Just as long as you don’t leave the field too early and climb a stile heading towards houses (as I nearly did this year). 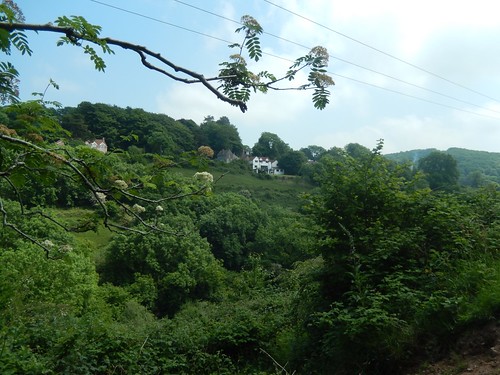 Continuing down to the next road (used as a shortcut between the A38 and Cheddar), you’ll soon see your next checkpoint on the right at Shipham, where you MUST stop and allow them to claim another tab from your wristband. 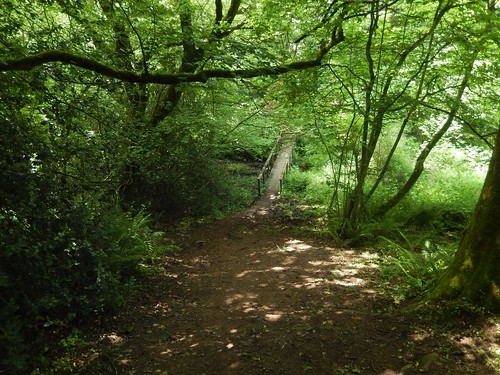 Across the road and right a bit (not an easy crossing with a blind corner ahead of you), the path drops down to a wooden footbridge before another unexpected climb up large reinforced steps – similar to those as found in Ebbor Gorge. 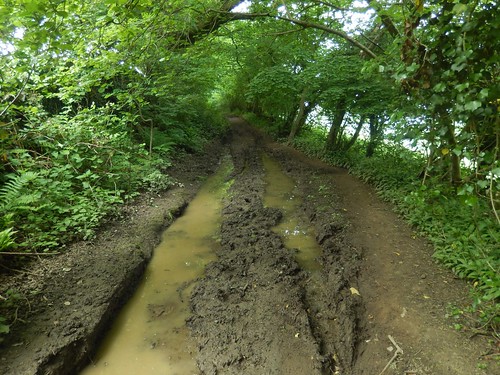 Across further fields and you turn left up a track to join Winscombe Drove, along the northern edge of Shute Shelve Hill. In the event of wet weather, this will usually be the muddiest stretch of the entire thirty-miles. In spite of the two large puddles you can see, it wasn’t very muddy at all, in Sunday’s heatwave. 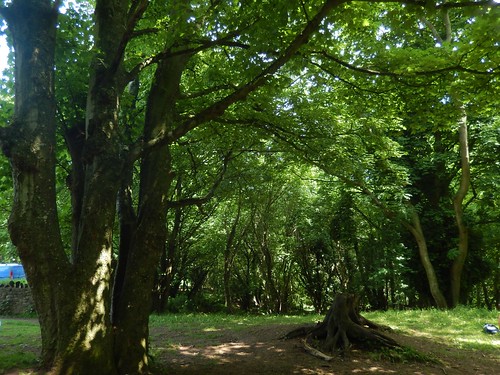 At the eventual end, you reach the A38, where you can use islands to quite safely cross over and, walking downhill briefly, join the Winscombe Hill road to the next checkpoint beyond the Kings Wood car park.

It was at Kings Wood [no apostrophe] that I decided to stop for lunch, this year. I had hoped to stop at Shipham but there was little shade and both of the wooden benches were occupied. A fellow thirty-miler soon joined me and removed his socks after taking off his shoes… On future walks, I intend to carry a spare pair of socks so that I can change them at halfway (my foot problems are an issue I could discuss in a separate post, if you’re really keen…).

This marks the end of my second instalment on walking the Mendip Challenge, as we’ve arrived at the starting point for the 10 Mile route.

Having plotted out the distance so far, it looks as though you’ll have actually covered 19 miles, upon reaching King’s Wood.