As a final (and intensive) training exercise ahead of last Sunday’s Mendip Challenge; I left work at 12.30, jumping on to the M5 motorway and then west across the Second Severn Crossing and in to Wales. 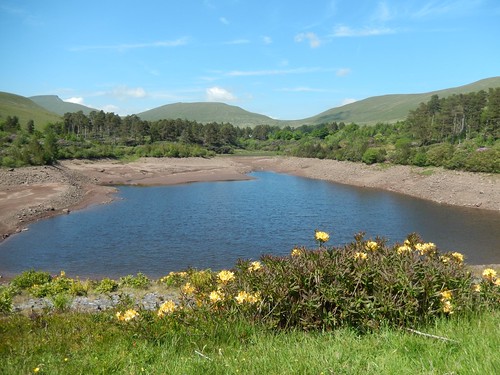 It was roughly one-year since my only prior visit to the Brecon Beacons. I had returned to take on the Four Peaks Walk; aiming for a one-hundred per cent completion… 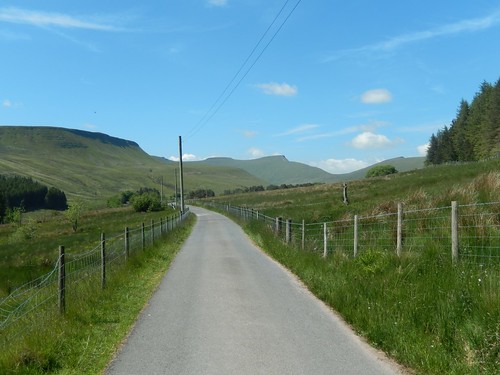 You’re likely to see and recognise a lot of photos that will be similar to the ones I took last year. But with the sun so strong amidst an almost-clear blue sky, it was hard not to take more than one-hundred photos along the way! 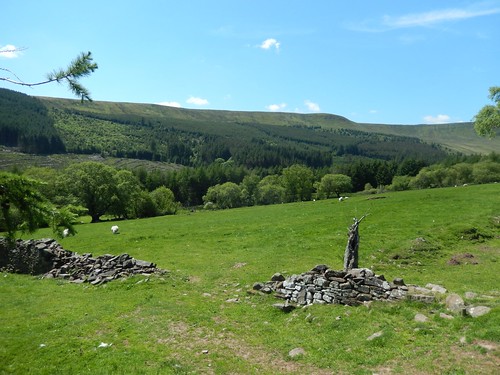 My journey led me back to the car park closest to Upper Neuadd Reservoir. I arrived about 14.15 to find the space was about half-full with large potholes that took me by even greater surprise, while a sense of near-excitement flashed through my brain. 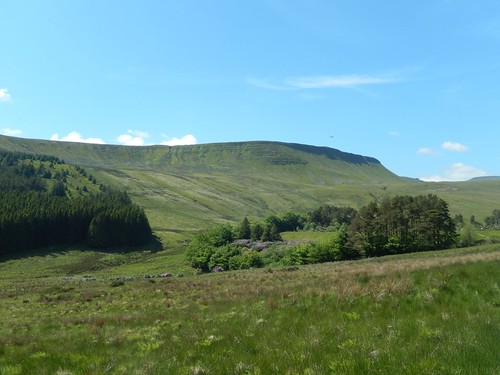 Traffic heading west along the M4 hadn’t been too bad, aside from a couple of slight delays and queueing. My stomach was yearning though and, before getting change and setting, I made an effort to eat a portion of my packed lunch, in the boot of my car.

At about 14.45 (maybe an hour ahead of the start time in 2015), I set off along that familiar road towards the reservoir with the mountains rising in to view, almost immediately. 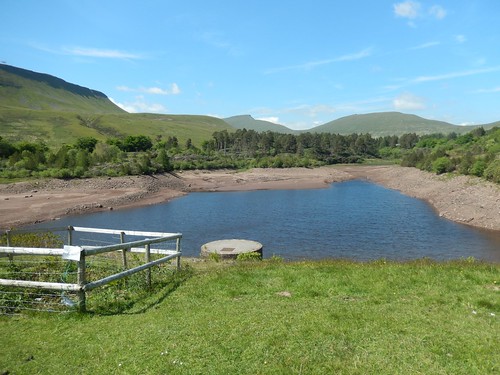 This experience was somewhat marred by the helicopter overhead, which appeared to almost set-down south-west of Corn Du in between a number of large and disruptive circuits around the valley ahead of me. After twenty-minutes perhaps, it moved on. I look on to a almost parched Upper Neuadd Reservoir, compared to what I could remember of last year’s visit. 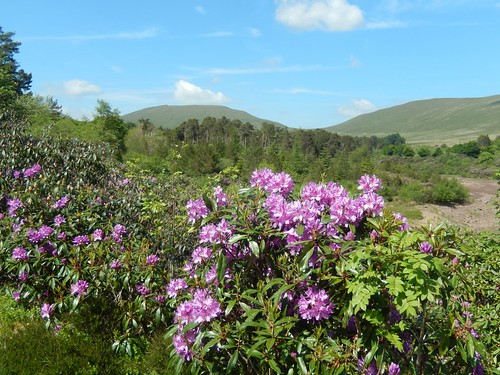 With these summertime, I felt as though this somewhat-familiar walk had been freshened, even though it would not feel ‘tired’ or overly familiar. 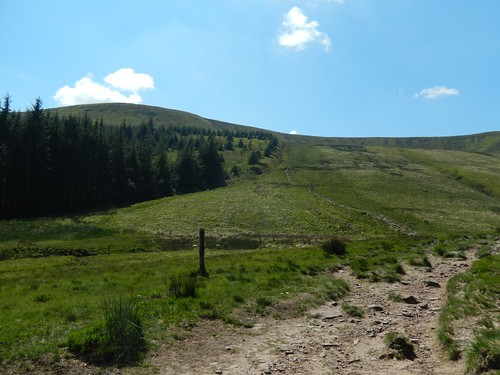 I tried to appreciate as much as I could whilst walking along the dam and passing two other walkers before reaching the gate. I knew all too well what was moments ahead, as my mind flashed back to memories of an intermittent scramble amongst sheep on this near-vertical wall of grass, just beyond the woodland. 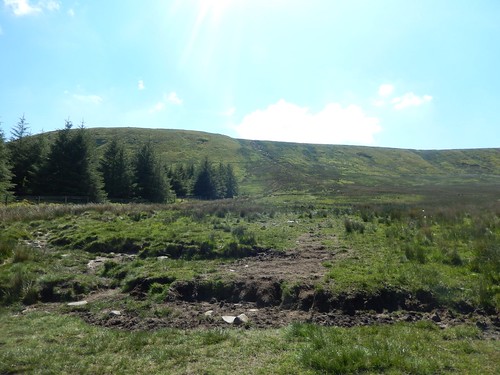 Climbing the northern edge of Taf Fechan Forest to its north-western corner was a workout without over-exerting myself. I felt ready for the thirty-mile Mendip Challenge… Then, as I passed the trees, the gradient increased significantly.

Last year, we skipped this part of what appeared to be the main path as it was largely wet and sloppy underfoot; choosing instead to scramble up the hillside. This year, I stayed faithful to what I believed was the route – which also looks as though it may house a small stream, in wet weather. It was rocky and challenging in itself but, I made it. 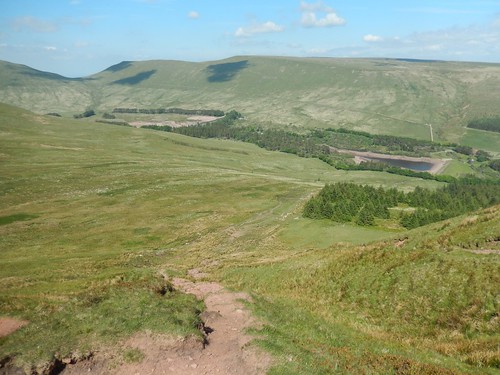 From the top of Craig Fan Ddu, it was suddenly a very long way back down. A good three-hundred metres, by my reckoning. 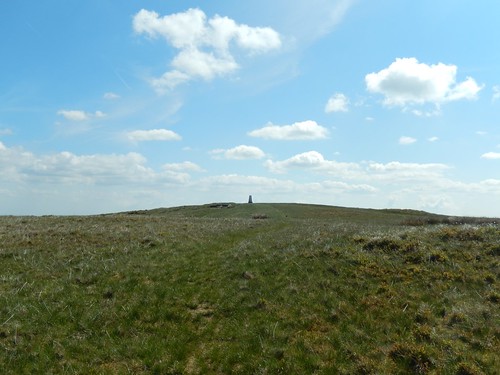 It had taken me an hour to get this far – for which, I naturally blame the sun and the fact that I’d been at work since 7am… Before soldiering on to the first of four mountains to follow, I made a brief westward detour to the trig point I had spied in May 2015. 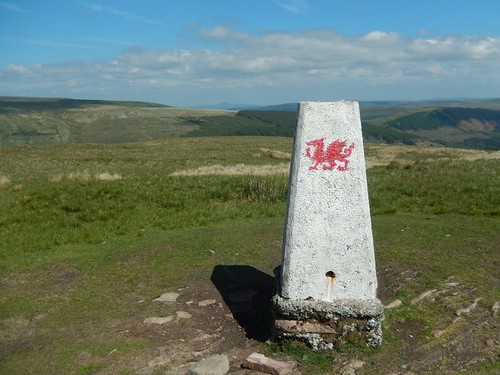 This trig pillar sits at the top of Twyn Mwyalchod [please, do not ask me to pronounce that] and is probably not very frequently visited, due to the star attraction slightly further north. I thought the Welsh Dragon was a nice touch and I believe you can see the peak of Sugar Loaf Mountain [another target for this summer] in the distance. 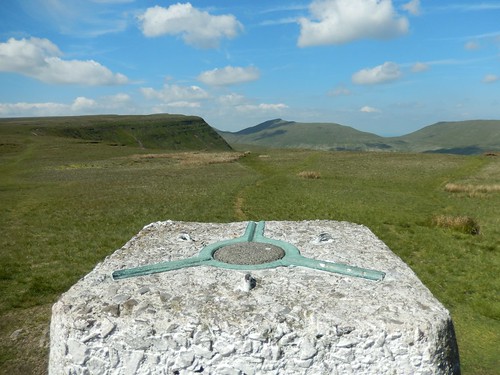 When I visit a trig pillar now and have an OS map on hand, I like to try and ‘triangulate’ with the other trigs, to decipher which ones it might be pointing to… This one, strangely, leads you to trig-less Cribyn, with Pen Y Fan (the highest point) lying slightly to the west.

…While the other two were unpronounceable and very difficult for me to type! 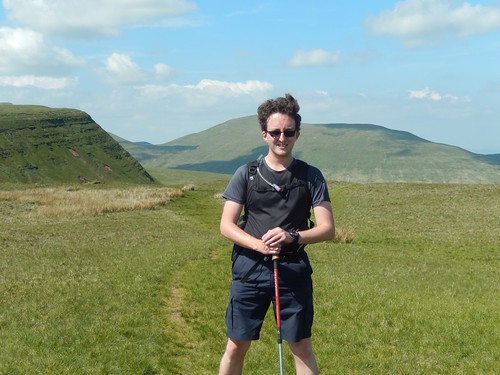 I also like to try and take a photo of myself, using the trig as my tripod. Here, my head is obscuring the peak of Cribyn. 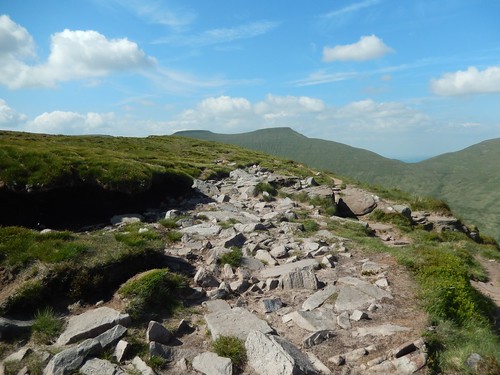 Returning to the track and continuing northwards; I rediscovered the large rock-laden ‘mountain’ path that leads you the rest of the way. Even now, I still wonder; is it man-made? 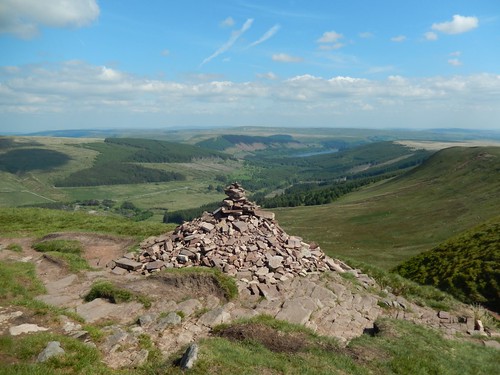 Before that, I reached my first cairn and, as would become a habit of this walk; I picked up a loose stone and tossed it on to the pile… At the second attempt, it remained in places amongst the others. I’m not sure why I did this but I think I felt inspired by a scene towards the end of The Way. 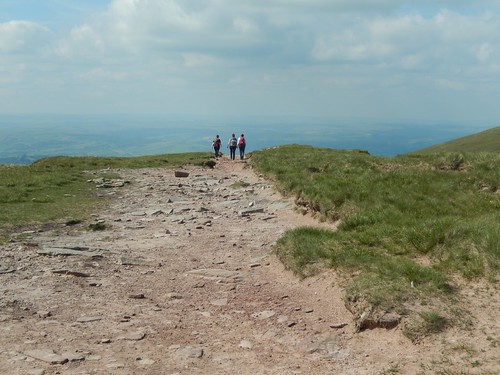 Following this ridge on my own, it seemed to be much more of a distance than I could remember. That’s not to suggest that I enjoyed it much less as I had the immediate landscape to myself. It was only as I drew closer to Corn Du that I came within distance of others and following a good hour of solitude. 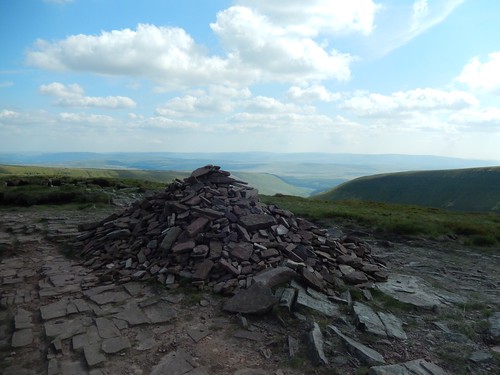 Another cairn (although, this one isn’t highlighted on the map and so, may not be ‘official’) and I again selected a stone from the ground that I found appealing… This time, it found its resting place at the first attempt. 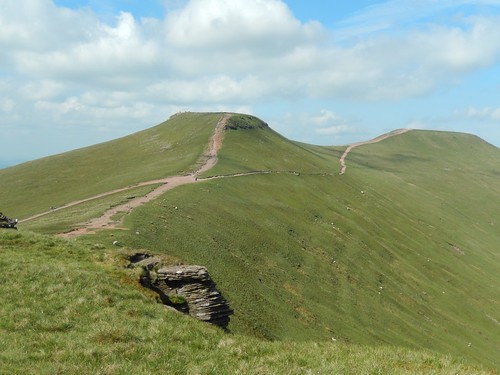 Then, it was time to climb. 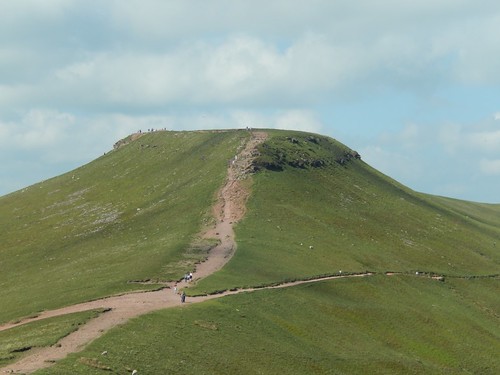 People were all over Corn Du… On a Friday afternoon! Had they all mistaken it for Pen Y Fan? Or, had I drifted out of consciousness and already passed it, mean that I was gazing up at the highest point, after all?… 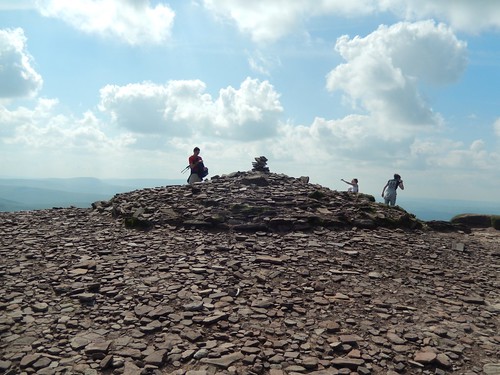 I took the same route as last year; following the main track until a proper scramble up stone ledges protruding from the final few metres of the summit. Another cairn was to be found on top (stone, throw, lands, etc.). People posed for photos but didn’t linger for too long. It must be the power of the trig point. 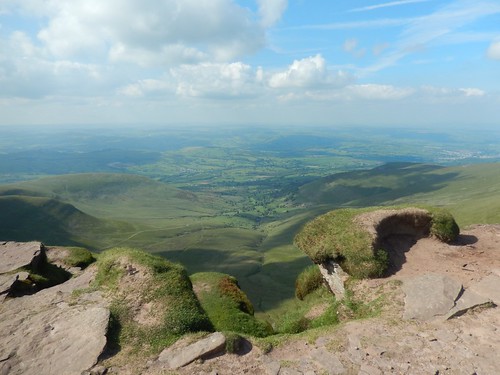 It looks as though the Beacons Way climbs to the top of both peaks, here. For the less adventurous, there’s an alternative path that circumnavigates the lower southern face of each mountain. Oddly, this trail doesn’t appear to climb Cribyn and I’ve never seen waymarking for it in this area. 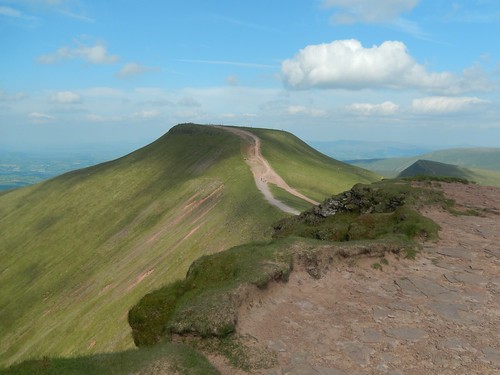 Pen Y Fan was to follow and I passed as many people climbing up it as there were sat around the summit. There’s a dip of only thirteen-metres between these two points. 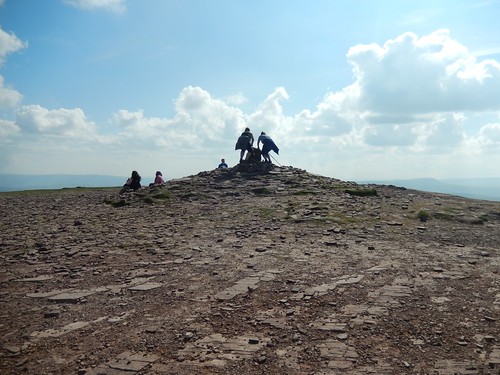 Again, the cairn (which is on the map) had people clambering over and in to position for the impromptu photoshoot. I’ve never seen someone outright refuse to take another person’s photo in such a situation. More often than not, they wager in a deal that will also benefit their existence on social media… 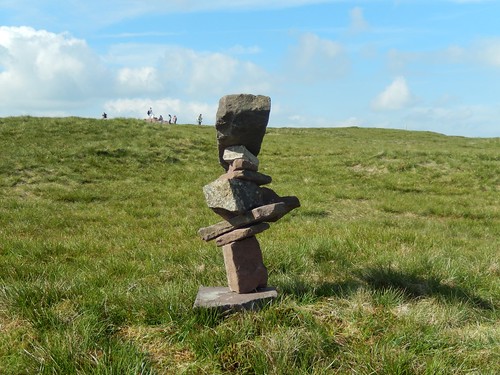 I kept my distance although, a photo of me on one side of that trig point might still exist somewhere in this universe… My attention wandered over to this physics-defying stack of rocks. 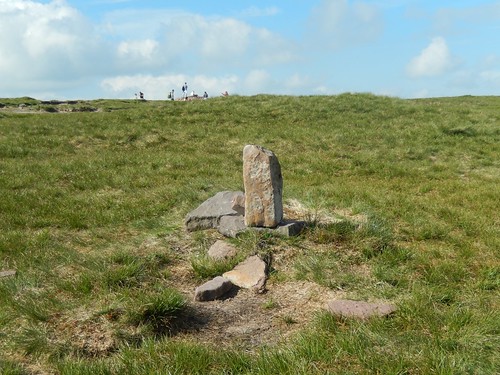 …And the less-successful effort. 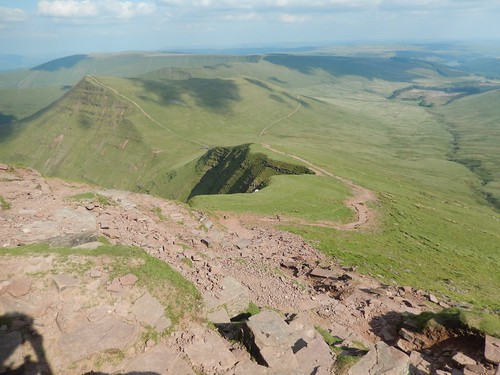 At 886m, it’s the highest peak in the south of Britain. From here, you’d have to travel further north through Wales to reach a higher peak.

From here, my walk walk continue down and back up to the top of Cribyn. Of that, I was sure; having come so far a year earlier.

But with weighted post-work, ‘car-lagged’ legs and the prospect of a long drive home after this adventure in the sun… Would I also make it to the summit of Fan Y Big, for the first time?

To find out, you’ll have to wait for Part 2!