It was somewhere around midday as I passed through the small village of Litton. Lunch was only an hour away and I knew where I would hope to stop in time. 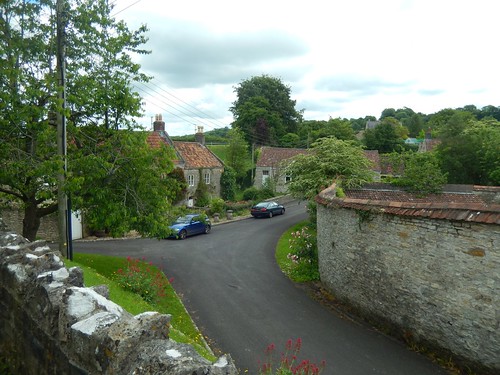 But instead of taking a more direct route west to East Harptree Woods, I would now be looking to join the Monarch’s Way further south, so I could tick off a few more miles of this long-distance route. 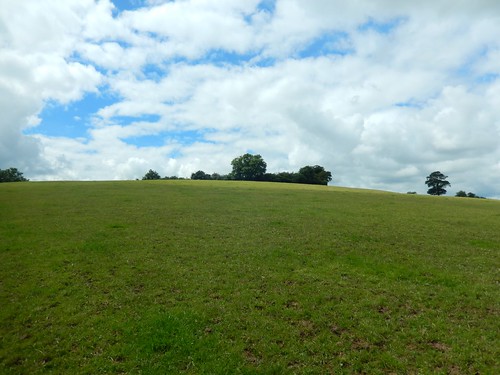 My walk continued immediately with the steep ascent of Hook’s Hill. 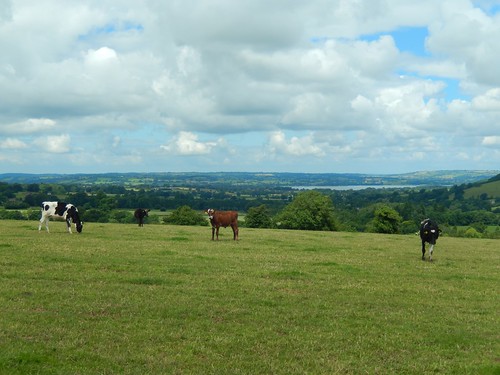 As I neared the top, the quality of the way ahead suddenly deteriorated and I then learned why there were so many small imprints within the depths of this mud. 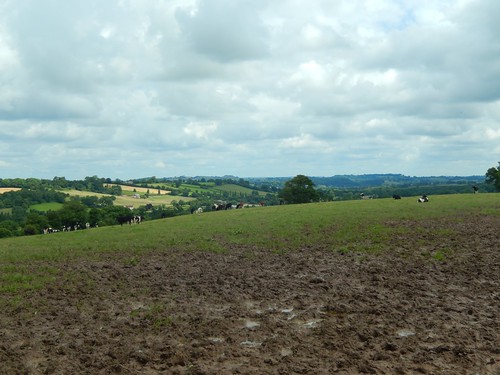 Being young, this calves were un-intimidating and perhaps not confident or curious enough to take a closer look at me. As a passed by, even the mother at the far end didn’t take too much of an interest. 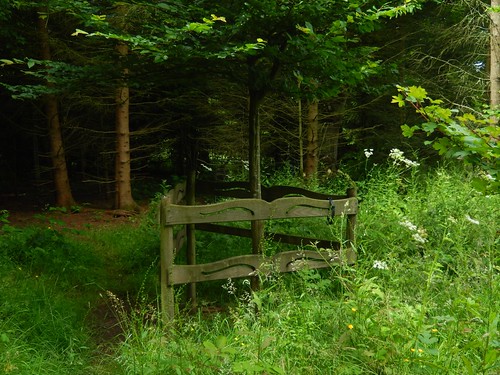 Beyond the cattle, the path drops down the south-western side of the hill and runs along the edge of Litton Wood. 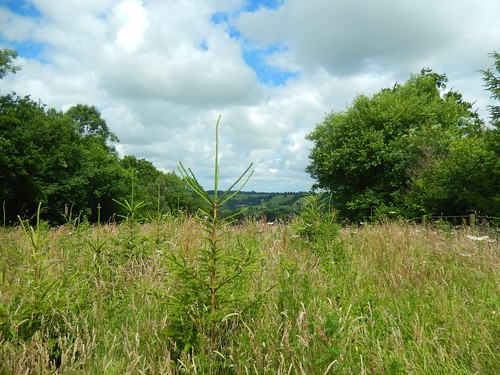 This path was fairly easy to follow without regular waymarking and I soon found myself passing through future Christmas trees.

As I joined the road near Wooten Hall, I knew I had a good few miles of road walking to follow. I followed Ashel’s Batch up Bell Hill, then up Bell Lane to Mearn’s Cross, before turning west towards Eaker Hill Farm. 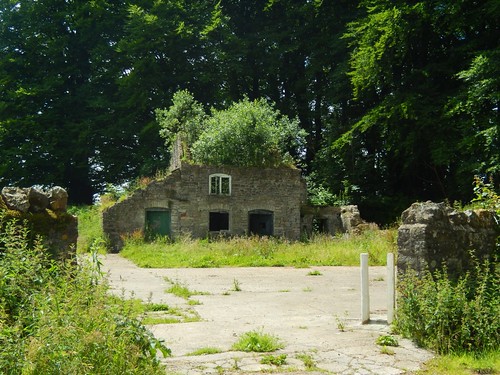 It had been steep so far and, on my way up towards the farm, I had to step aside and give way to a number of 4×4 vehicles. These buildings that soon emerged on my left had clearly been neglected for a number of years. This farm appeared to be largely redundant and I guessed that those drivers may’ve spent the morning hunting around the woods, using this as their ‘base’ and car park. 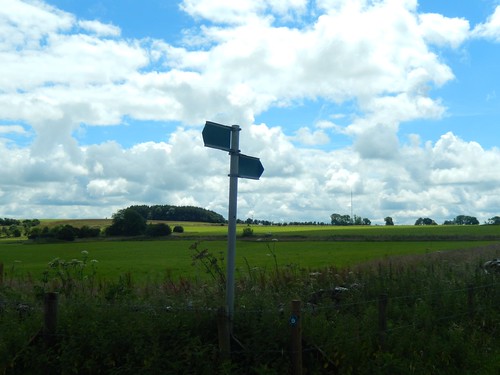 Finally, I arrived at a crossroads with the Monarch’s Way, which I would follow northwards from here. 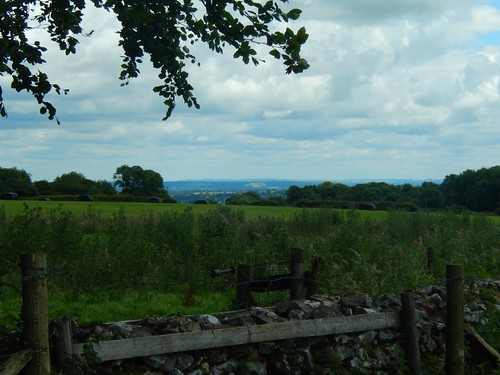 Off to my right, I realised I could see a White Horse – probably the Westbury White Horse – although, in the photo above, the speck in the centre of the image is probably too faint for you to make out clearly. I never would’ve known that you could see this from any point on the Mendip Hills. 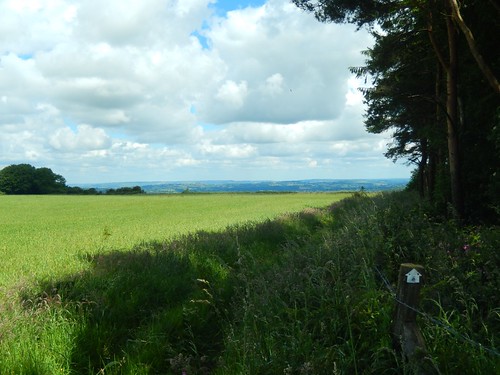 Reassuringly, the Monarch’s Way was quite well signposted, in such a rural area where I would not meet or hear another soul. Grass was a bit long in places but, once again, I was able to remove loose mud from my boots. 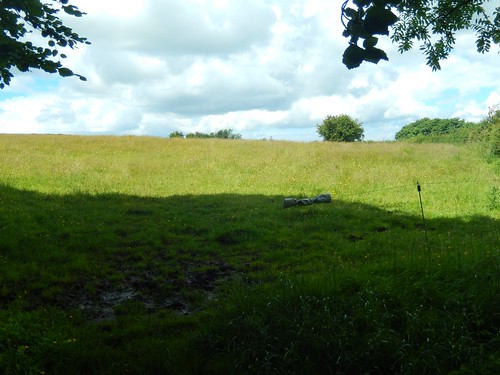 Then, I was directed to head across a grassy field, with a tractor active in the next field to my left… 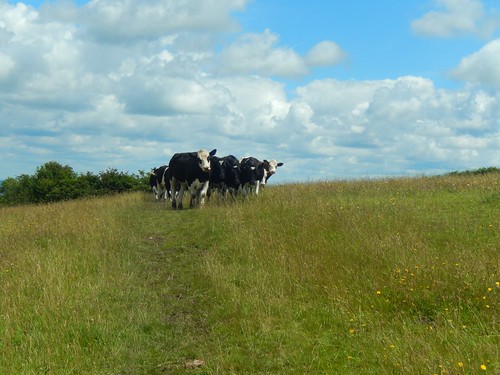 As I crossed over the line, I became aware of cattle near the brow of the hill. Following an indistinct way forward, my foot suddenly sunk in to and unseen puddle, which sent unpleasant water up the back of my leg. 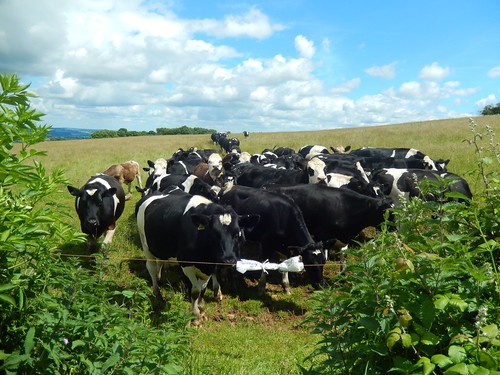 Halfway along, these cows grew very curious and I was soon leading the herd. They were hasty, while ultimately harmless. 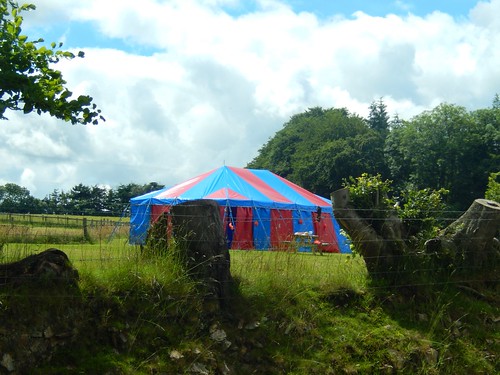 Following the track down to the road, I passed beside Nettwood Farm and noticed a large tent in the field. On the OS map, ‘Net Wood Farm’ is not stated as a camp site but if you explore their website, you may find they have a lot to offer. 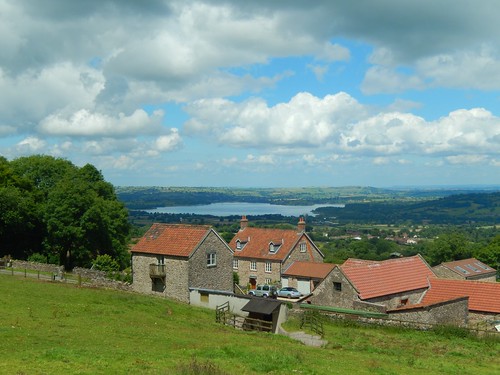 With Chew Valley Lake back in my sights, I only have to turn left at the road and then right in to the woods where I could rest at a picnic bench beside the car park, close to 14.00. 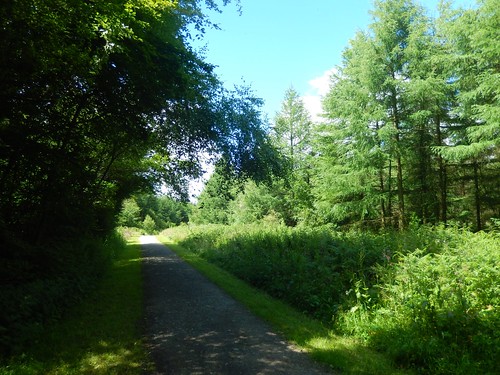 A late lunch is better than no lunch and, although I had less than two hours to walk, I almost wished that I was already beside my car. 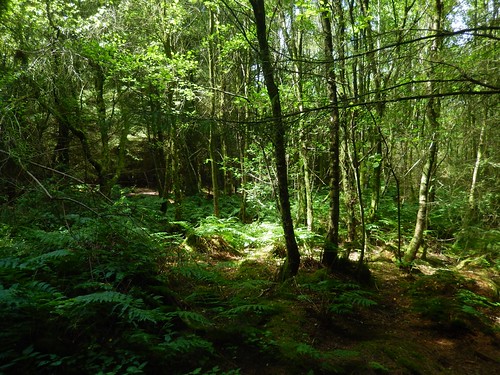 This was my first visit to East Harptree Woods for at least three years. There were no more than five cars in the car park. It’s a good place to come for a fairly quiet walk. Small but not perhaps as well known or frequented as other forests in the surrounding area. 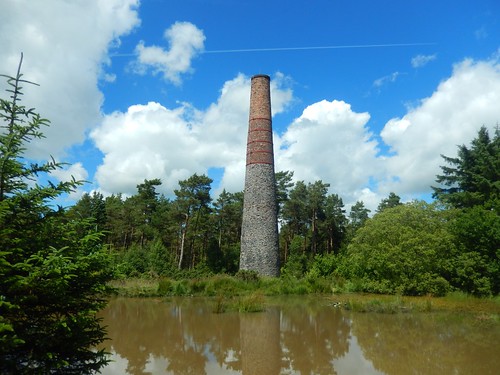 A major highlight is Smitham Chimney, which is a part of the Mendip Hills’ heritage; dating back to a time when this area was hive of mining activity. 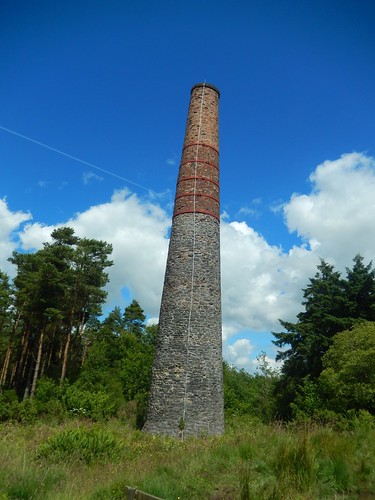 Last time I was here, the sky was grey. 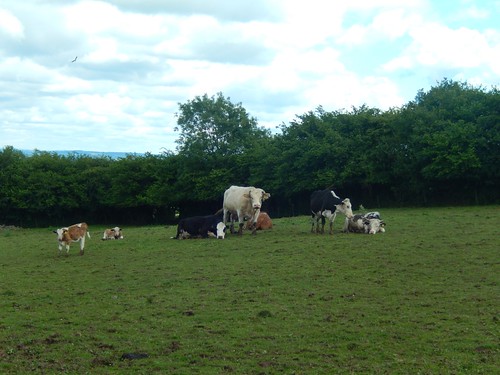 Walking east to rejoin the road, you’re supposed to step in to this field and follow the right of way along the lower fence… But as it runs parallel to the driveway, I decided to keep out, moments before the bull stood up. 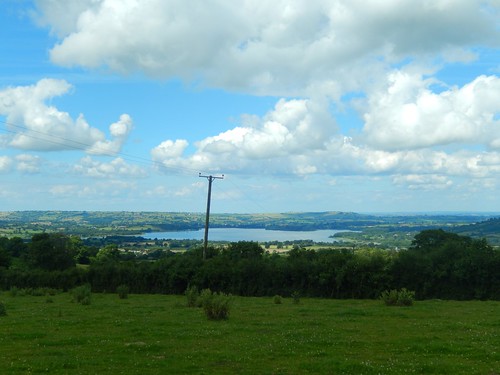 Back on the Monarch’s Way, I proceeded to descend the hillside when the pain in my left knee developed to the point where I had to stop awkwardly, before hobbling the rest of the way to the road.

This is something that first occurred in September (descending steps in the Peak Distrcit) and only recently returned in the beginning of June. Looking at some images, my best guess is that it’s my exterior cruciate ligament. It’s hard to identify when it’s not hurting but hopefully, a doctor will soon be able to advise… I think it’s going to affect my intended coastal walk for next weekend. 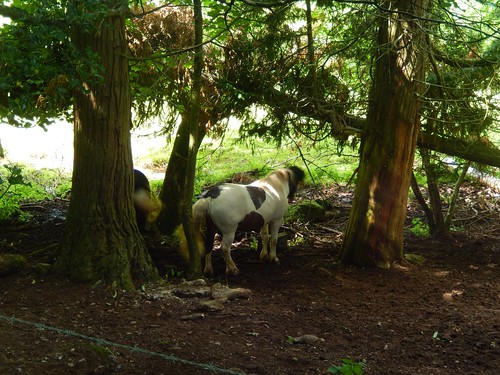 I don’t remember this as being a hot day – yesterday, in fact, was uncomfortably warm, at times. 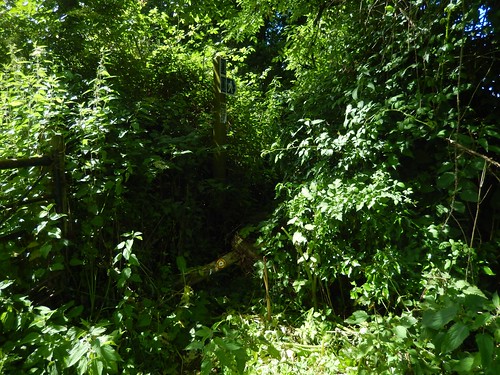 A few roads further along, the Monarch’s Way continues beyond signage that is almost lost to the wild. 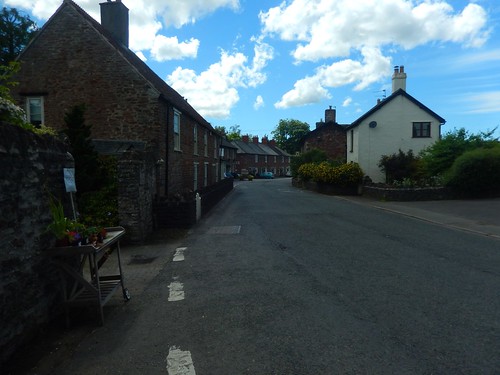 Ahead of this, would’ve been a descent to Beaconsfield Farm but I left the Way to follow the roads, as I felt intimidated by the prospect of walking towards a farm yard with no clear path on the ground infront of me. A right turn along an overgrown Cowleaze Lane would lead me in to West Hartptree, via the Limestone Link route.

I joined Whistley Lane briefly before turning left across the first field, leaving the Limestone Link for another time. This was a more direct, yet scenic, route back to my car… 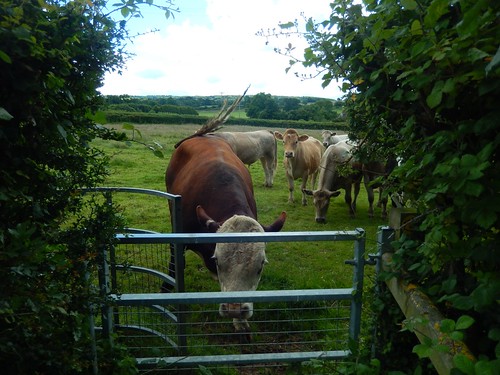 At first, they weren’t interested. Even the cows with horns stayed put… Until I was two-thirds of the way across and this big bugger came over for a close inspection! I was moments away from the gate when he started running. Had I not turned around to stand up to him, I might well have been pancaked… At least, that’s how it felt in the moment. 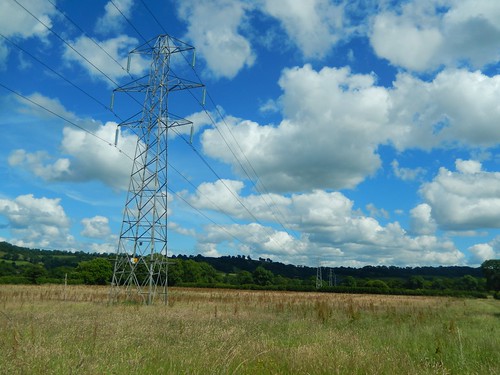 I had hoped that walking this way would allow me to look north over Herriotts Mill Pool. But, all views of the water were concealed beyond the boundary hedge. I’d forgotten this, as it was also the route I walked back in 2013 (not documented on this blog). 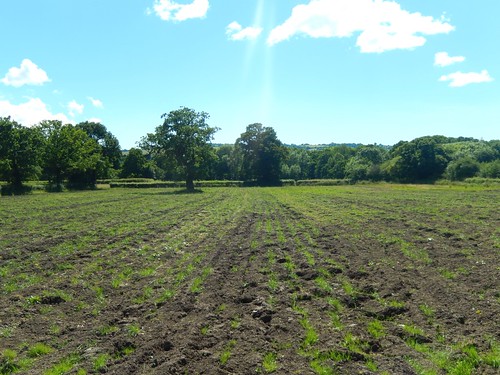 I passed another herd of cattle further along but they weren’t in the least bit interested. It was a warm day, which I guess challenges the belief that ‘cows lying down means rain is coming‘. 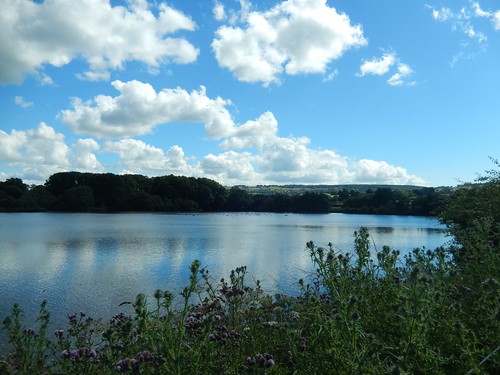 It wasn’t longer after that I returned to Herriotts Bridge and to my car… Where I inadvertently parked different to everyone else – parallel to the road, where others had parked perpendicular or on the diagonal. 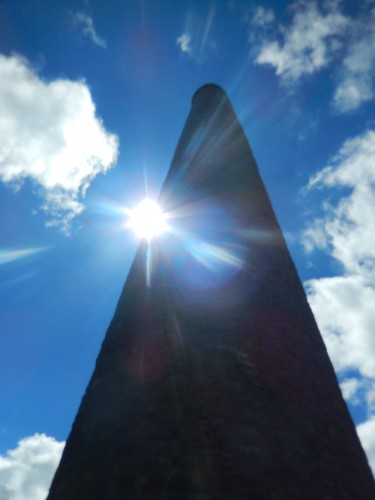 In spite of my recurring knee pain, I was pleased to have found another trig, to explored more of this area, revisited East Harptree Woods, Smithan Chimney and, for a walk I’d planned to be only thirteen-miles long, I’d managed to work in an extra two-miles, which goes a long way towards my aim of walking another hundred-mile month!

Total distance of this walk: 15 miles