It was the day of my arrival in Shropshire, ahead of a four-night stay at a campsite towards the south of the region. My SatNav had been destined for an afternoon of tent pitching, from the moment I left home. 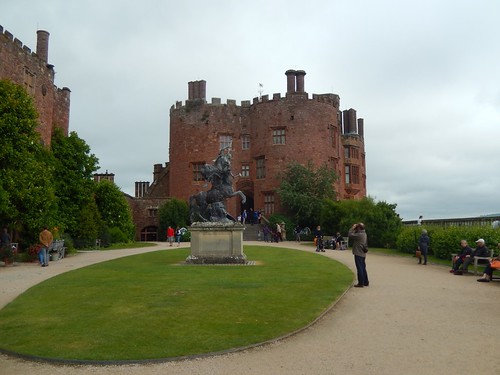 But, as I approached the town of Bishop’s Castle and saw signs for Welshpool, I decided continue driving north and soon reset my SatNav accordingly, en route to a National Trust stop at Powis Castle. 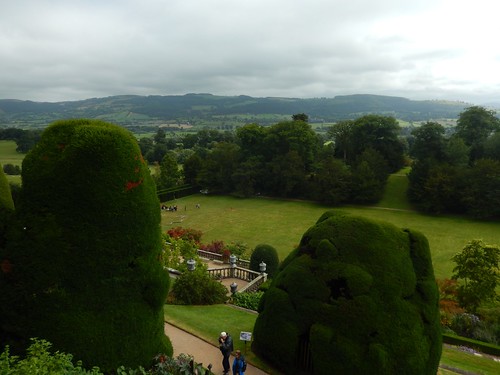 It made a lot of sense, even though the sun was maintaining exposure through the clouds. I’d left home in good time and would arrive around noon. This would be the most northerly feature of all destinations for my planned time away and, to be honest, I had a greater interest in the walks that lay ahead.

Really, I was getting this one out of way and killing a bit of time. 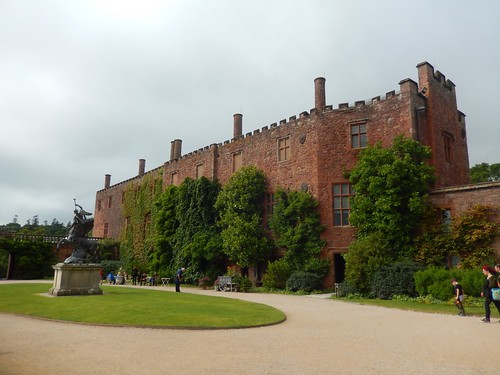 Upon arriving at the site, I was clearly directed to an unmarked bay amongst a sea-length of cars. From there, it was a good five-minutes of walking beside all of these cars before I reached the main entrance.

My National Trust membership card was dutifully scanned outside and yet, I remember feeling determined to explore the ticket office beyond the doorway, in spite of the volunteer’s intention to shoo me elsewhere… I think the three-hours of driving had taken its toll on my ability to asses an environment! 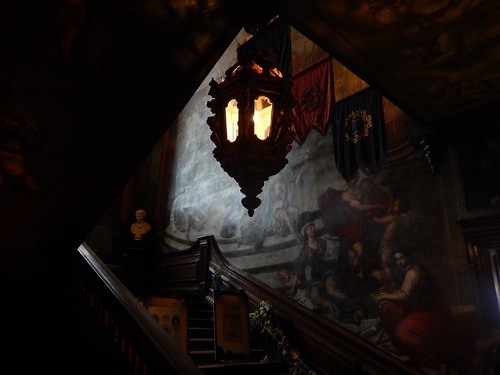 There were grand views down to my right, across the gardens and towards the distant hills, as I made my way up steps and in to the main building. For a castle, Powis, in my opinion, is much like Somerset’s Dunster Castle, in how it’s appearance resembles someone’s current home, as opposed to a ruin like Corfe Castle in Dorset.

I left my backpack with the assistant behind the desk on the way in and was only able to take two photographs, before being informed (politely) that they do not allow guests to take photos indoors… I’d seen the signs on the way in but hadn’t taken full notice of them. 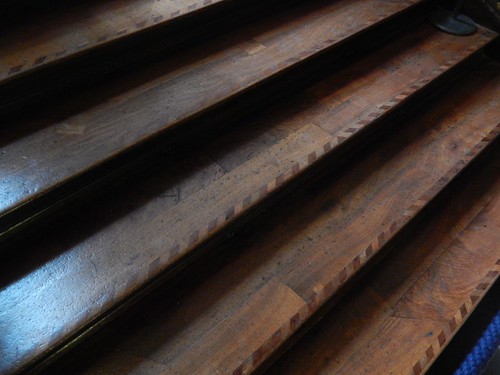 Still, you can admire the detailing on this grand staircase which, or so I read, is made from nothing less than WALNUT! I was recently informed that the National Trust ban photography in properties that are currently occupied. It was a shame and the first of their properties that I had visited with this rule. 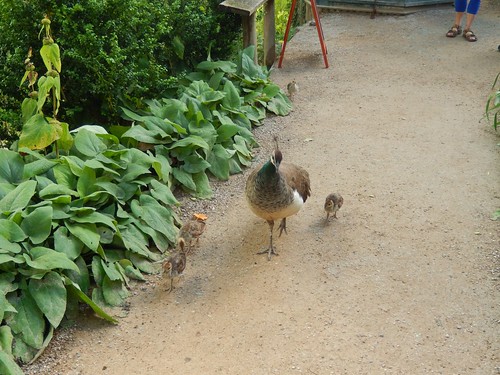 Moving back outside, then (because I can’t remember much about the interior, let alone share any photos with you) and here’s a family of peacocks. I can’t remember if there were signs requesting that visitors do not feed them but I do overhear one volunteer say that they’d lost a peachick [I had to Google it] because it had been something it could not tolerate (my memory also tells me it was bread). 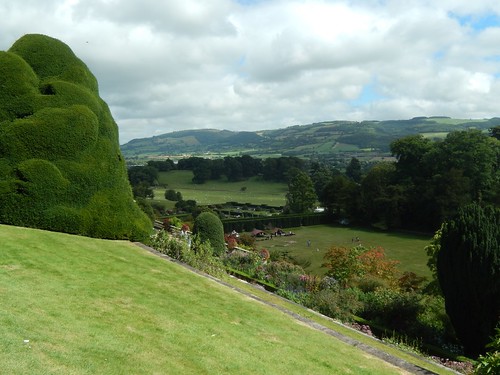 My intention now was to head down and explore the gardens, before settling on a spot to rest for lunch.

I don’t believe there’s any way to easily access this well-maintained green space as you have to pass sort of manned “toll booth” and hand over your ticket or membership card before you can proceed. 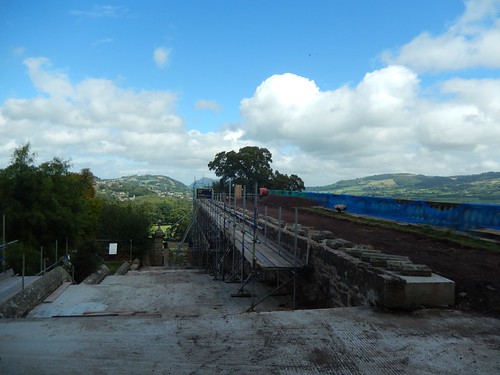 On the opposite side of the castle-manor to its entrance, I found that work was currently under construction or restoration. 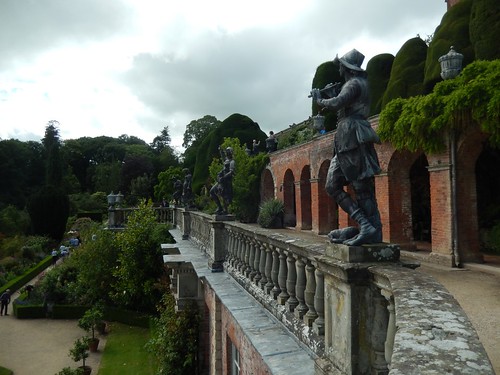 It was a busy day to be here. I had to shuffle past other photographers at certain points and follow a line of others down steps to reach further levels. 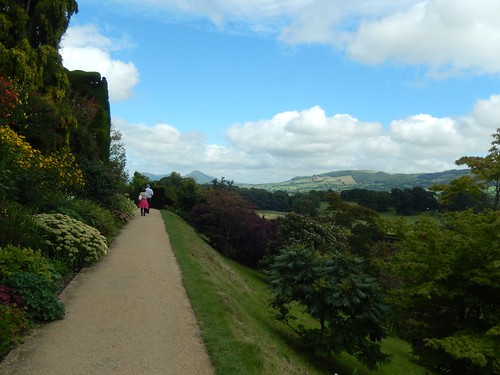 I’m quite certain, that pointed peak just left of centre in the photo above is The Wrekin. 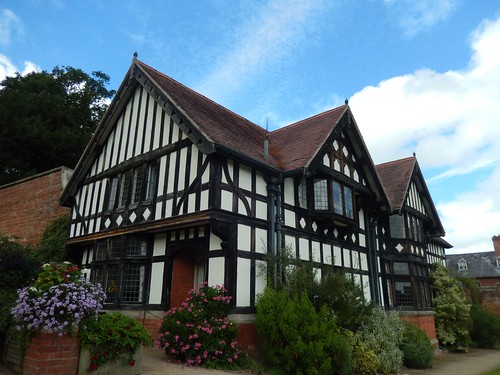 There was, what appeared to be, an occupied Tudor house, in one corner. Perhaps it’s where the gardener lives? Its style still blends in with the Medieval history of Shropshire. 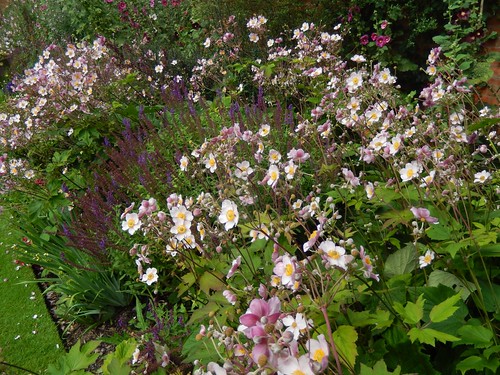 Having descended as far as I could, I reached a pair of locked iron gates that prevented access to and from a nearby road – which encouraged my growing belief that there was no way to access the formal gardens without paying. 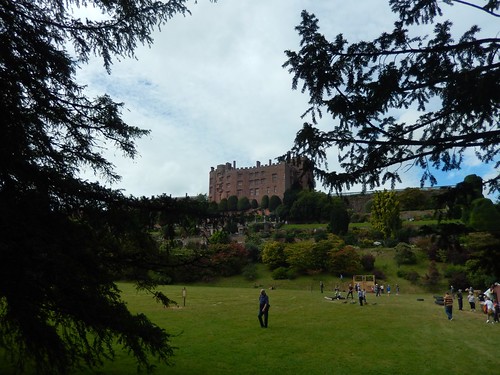 Of all the available benches, I picked one in the corner of the Fountain Garden, where there was no access beyond. I figured it would be the most undisturbed space I would find, with few people likely to walk past or infront of me. 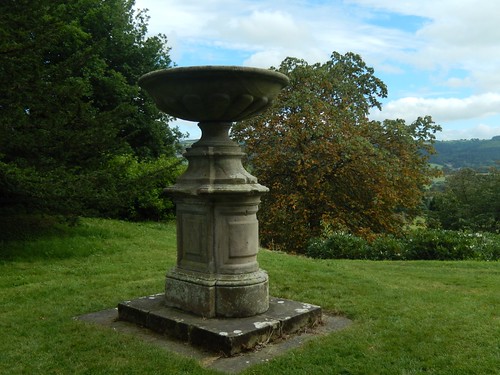 After lunch, I continued my circuit of the site in a clockwise direction. Beyond a small café with toilets, I climbed up through the trees to find this monument (?) on my left. To my right, a break in the trees allow me to see the castle from a distance. 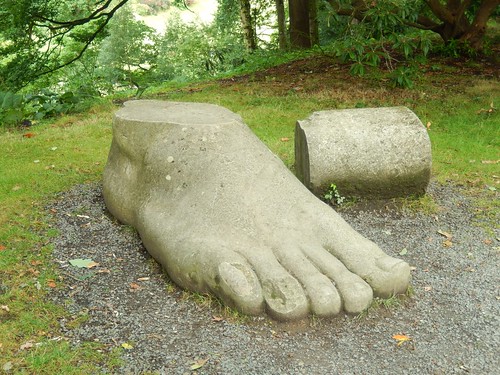 Further along this woodland walk, I can to a foot-shaped stone sculpture. It’s probably about 1.2m/4ft long. 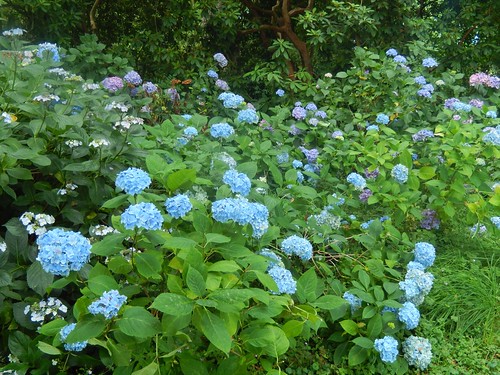 Beyond that, was a brief cemetery of pets who had once called this place home. 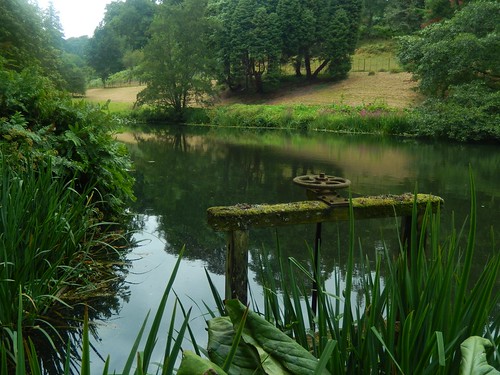 I continued my walk as far as the Stable Pond, with the sun still surviving, before almost turning back on myself to climb back up in search of the Ice House. 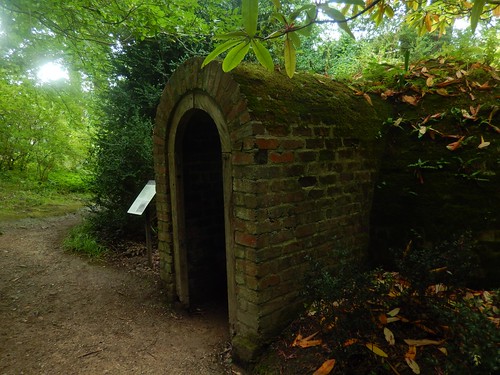 I imagine, there was once a well inside. It was very long way down and, sadly, this space only seemed to be collecting litter. 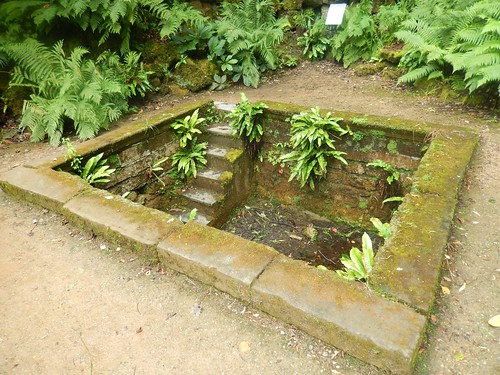 An even greater diversion led me to the site of the Plunge Pool. 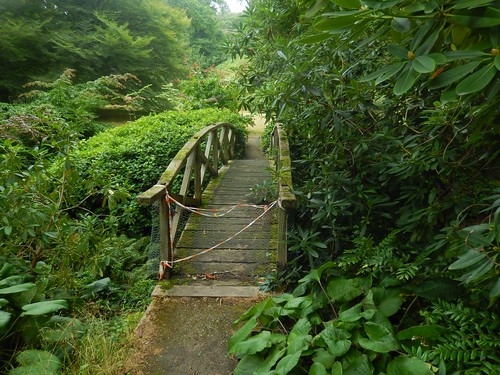 Just beyond the Ice House, I arrived at a wooden bridge that had been taped off, by some authority. While it didn’t look brand new, it didn’t look impassably rotten, either. From the map I’d been given, I worked out that you could probably take a long loop around to or from the car park from here, without being detected…

I wonder if that has anything to do with the reason it’s been closed off? 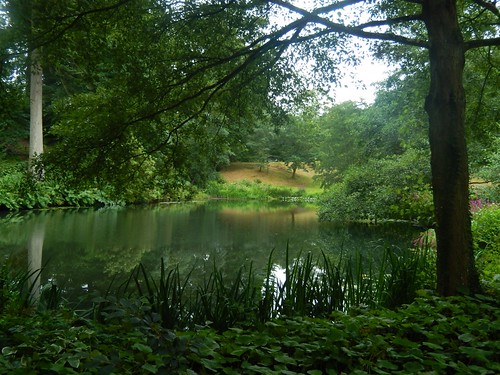 I’d spent a good couple of hours here, by now and was somewhat keen to get on to the campsite and pitch, in case the weather did turn and that forecast rain suddenly arrived at the most inconvenient of time. I ended up retracing my steps, climbing up past the manned booth to return in front of the castle entrance. 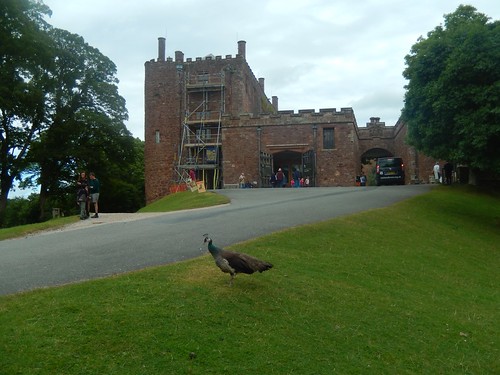 While I mostly enjoyed my time here and am pleased that I have been, I don’t know if there would be enough left for me to consider a return trip, one day. Speaking personally, I found the ‘no photos’ rule to be a big turn-off. It seemed to be a smaller site than some others I’ve been to – although, signs along the driveway entrance also state that you’re allowed to explore the surrounding estate.