I awoke from the tent on my first morning in Shropshire. It was a Monday unlike too many others. 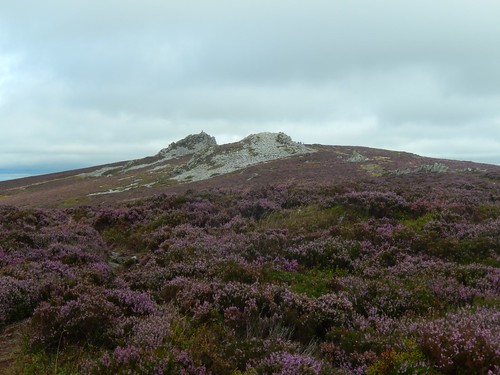 There was just one question on my mind – What to do? – as rainfall had been forecast for this day. On the one hand, I had a good excuse to go and be a tourist for the day… On the other, I was eager to get my first walk in on the Shropshire Hills. 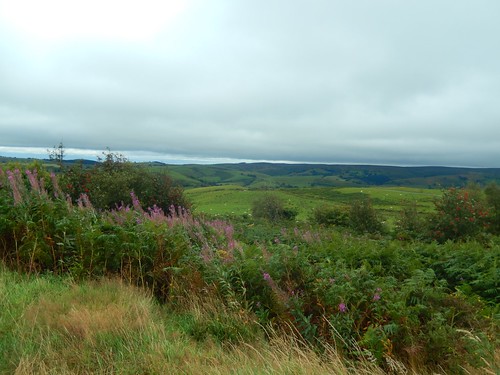 This route I’m following can be found at The Walking Englishman and I chose to follow it in an anti-clockwise direction, as I believe the author also did. 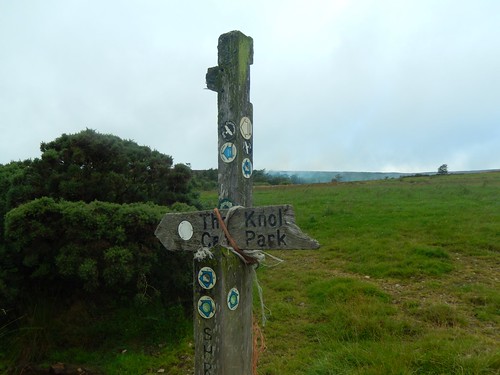 Credit to my SatNav for leading me along a series of narrow roads that would climb steeply uphill, past The Knoll. I was close enough to the car park to be able to see signpost directions for the Stiperstones National Nature Resereve car park. It was free to use. Another option (which would’ve added some miles to my walk) would’ve been to park slightly west and downhill near The Bog – we’ll get to that at the end of the walk. 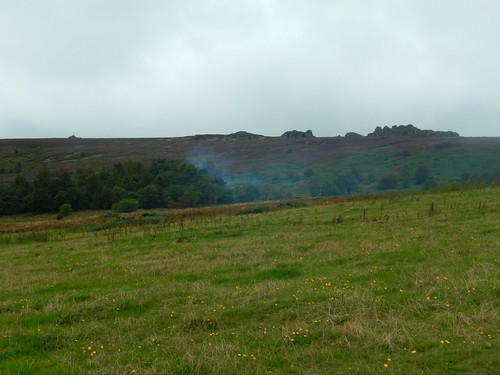 There was a small handful of other cars with my arrival. Although the day had begun as a dry one, there was little hope that sunshine was ever going to break through. As I walked north along the eastern contours, beneath the ridge, I could see smoke arising up to my left – frequent signs indicated that these fires were intentional to keep the bracken down. I’ve seen similar events taking place on the Quantocks. 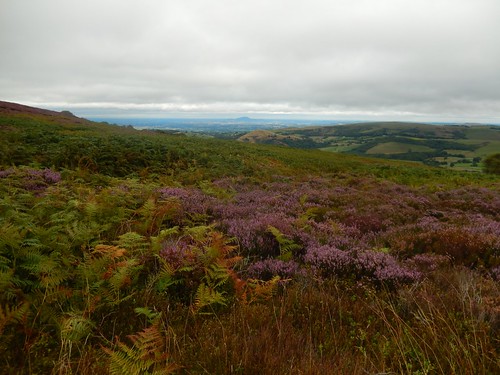 I didn’t know what to expect from this landscape and a walk of ‘only’ eight-miles but there was certainly a lot on offer. 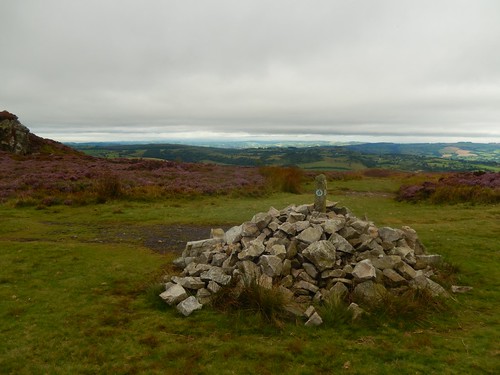 Within my first hour, I became very hesitant as I arrived at a cairn, marking a cross-tracks in my route. It was hear that I turned north (not following my map properly, as I should have gone west).

A large portion of this area is Open Access Land and it was only when I arrived at a stile further on that I decided I had walked too far north. I reluctantly turned back, looking for unmarked paths that would lead me on to the west-facing hill I was supposed to have climbed by now. 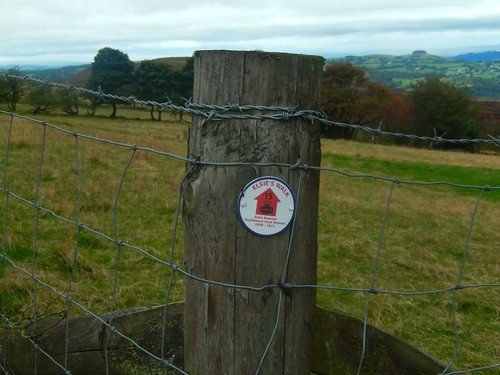 It was around here that I encountered a marker for Elsie’s Walk – something I had read about before my trip had begun. 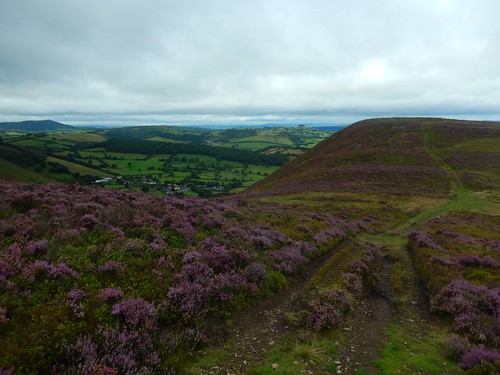 I was now en route to the heights of a hill, with the signs of a village, far below. 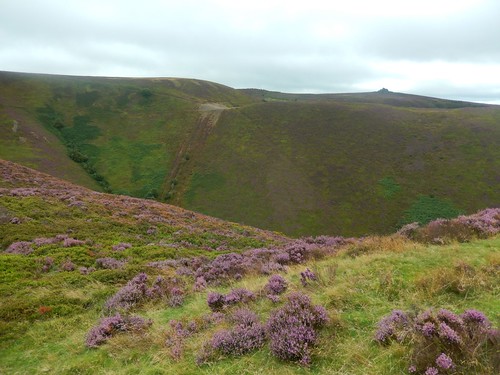 Around this time, the wind must’ve peaked at around 60mph, if not more. I didn’t linger for long – especially when I realised that I was on Oak Hill and not Green Hill, as intended… 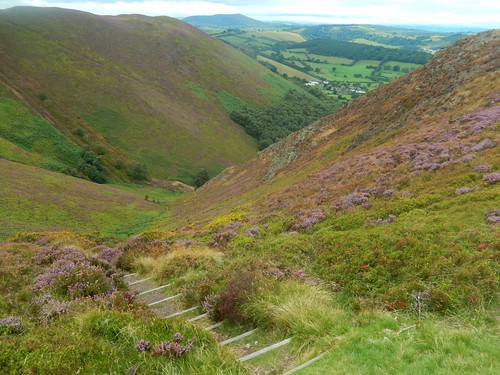 Placing faith (and greater consideration) in to my map-reading abilities, it looked as though there was a path that might bridge the gap between these two peaks. Fortunately, I did not have to descend the steps above – a set, of which, I would have felt more comfortable climbing, I’m sure. 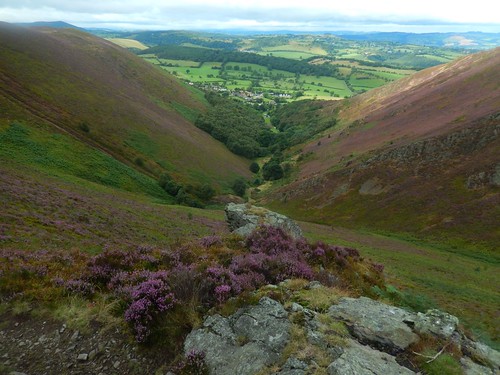 I don’t appear to have a photo that shows the steep hillside I was walking along but, these large rocks, with the perilous drop below, mark the halfway point in this trek across the valleys. Again, the wind was fierce and, following such a narrow track between the bracken and gorse, I was relieved not to have to encounter anyone walking from the opposite direction. 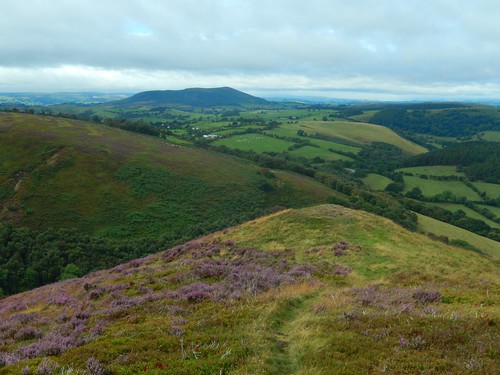 From Green Hill, you have a good view of Corndon Hill, which is one of the highest points in the area. 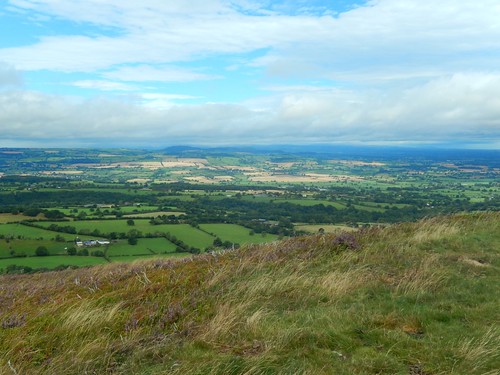 Looking further west, where blue sky appeared to be breaking through and I could see an unexpectedly flat Welsh landscape.

There were signs that there used to be a quarry nearby – I wonder if it was closed down for fear of what the falling rock could do to the village of Stiperstones below? 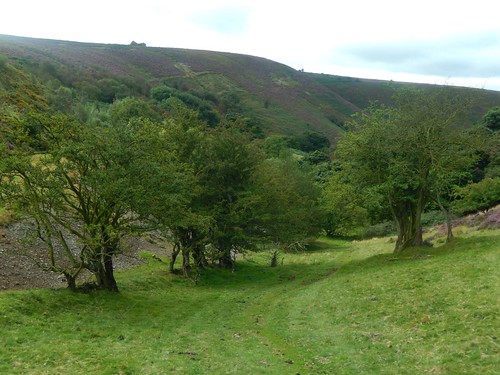 My walk would gradually descend in to a pleasantly green are of land, where sheep could be found, grazing. 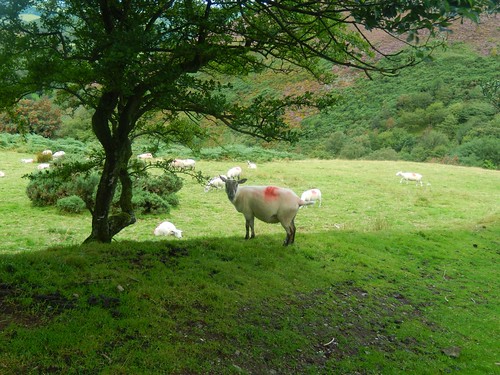 But, of course; going downhill meant I would only have to climb back up! 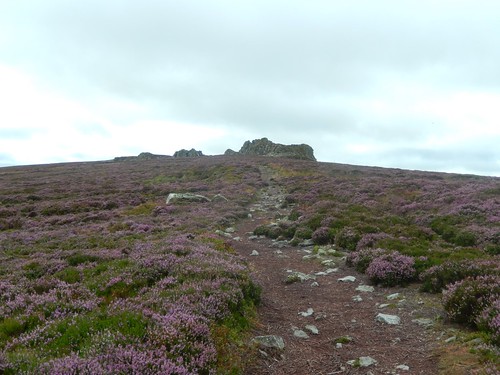 After a tough exertion, I joined the Shropshire Way in pursuit of a tor known as the Devil’s Chair.

That brings to mind a question… Why are such structures and formations often associated with evil figures? 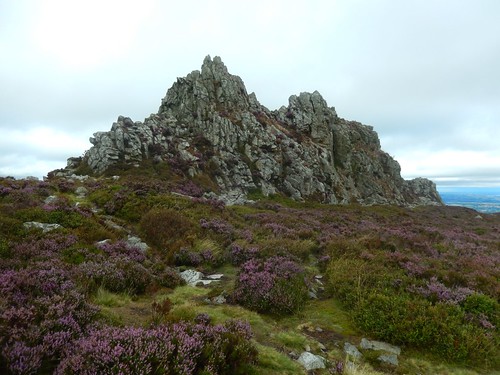 I was clueless as to which stones were supposed to have formed his seat or, perhaps Satan was so large that his physique demanded them all. 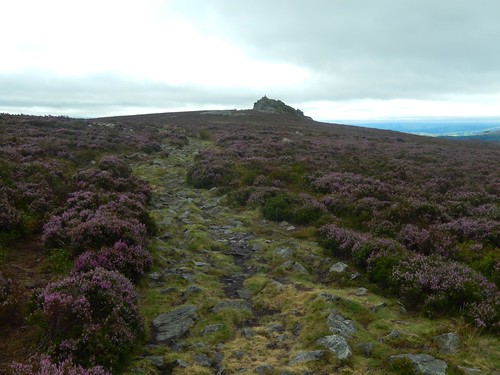 Suddenly, I felt like I was making good progress, approaching midday and beyond the misdirection of the morning. 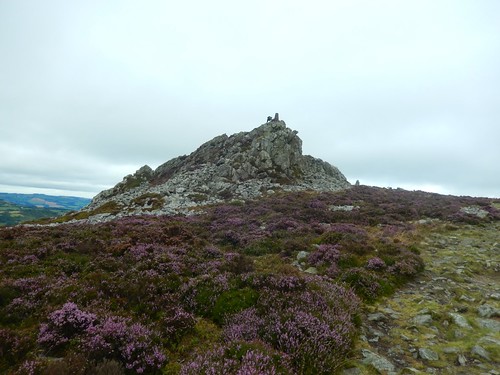 I came to pass the trig point at Manstone Rock without attempting to climb to it. Days earlier, I’d seen a video from a Facebook user who’d been swarmed by flying ants, up there. I was more concerned by this day’s strong winds, the risk of injuring myself on my first Shropshire walk and the fear of embarrassment, with someone else already claiming the intrepid scene. 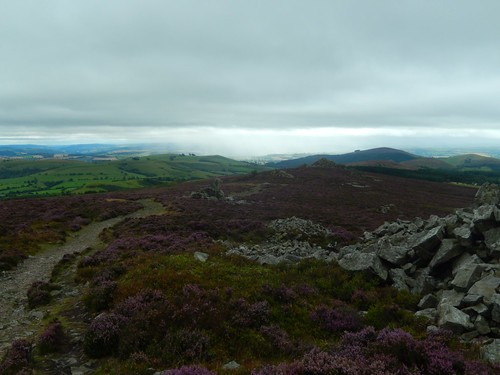 Continuing south from here, I passed Cranberry Rock before exiting the nature reserve. Following the Shropshire Way, so far, had been clear but not easy, with thousands of large rocks under foot.

Beyond that, I could see the heavens opening in the direction I was now headed… To be continued in Part 2.