Having arrived at Lightspout waterfall, I now faced two options in continuing this walk… 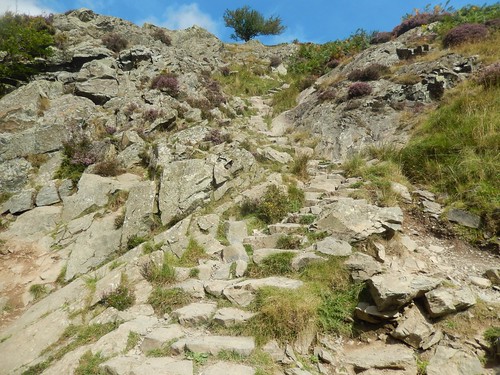 I could retrace my way along the rocky route and continue up Mort’s Road to the hilltops. Or, I could tackle an immediate scramble up beside the waterfall…

Either way, I was destined for the summit of the Long Mynd.

As the Welsh couple who’d arrived after me had already left and begun to climb the apparent steps, I felt it was only fair that I followed on the direct route to the top. I’d no idea how long this scramble would continue for. 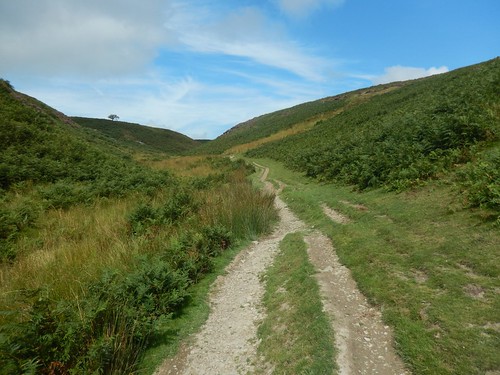 In actual fact, it wasn’t for very long. By the time the next group of visitors had reached the waterfall beneath me, I’d already arrived at fairly level and capable walking terrain. 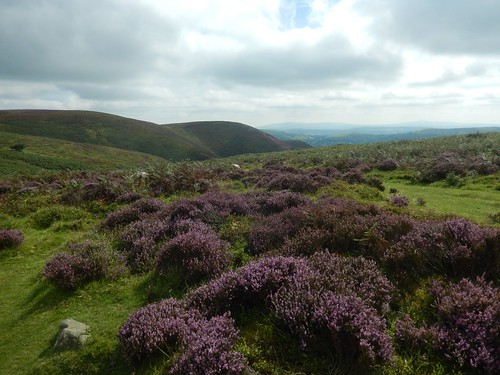 I passed another couple of people heading down the way I’d climbed up but, beyond a couple of horses, there was no-one else to be seen. I could also see a number of narrow tracks breaking off in various directions, along with a lack of waymarking… I took a chance upon a fairly wide track, soon passed a small group of picnickers, hidden beneath the gorse and I successfully navigated myself on to the Jack Mytton Way (part of which, I’d also seen a day earlier at Wenlock Edge). 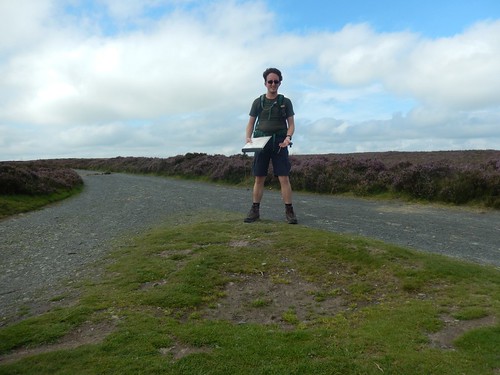 With a good mile to walk before reaching the highest point, I could already absorb and appreciate the panoramic views. 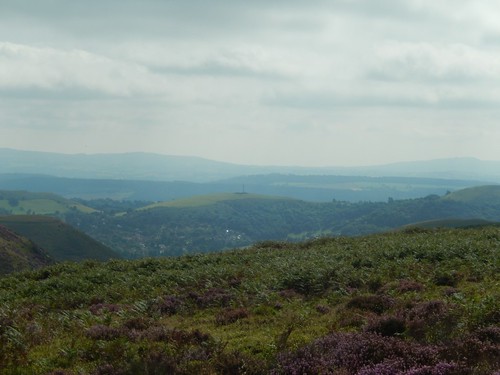 It’s possible that I was looking towards Brown Clee Hill in the vague distance – the highest point in all of Shropshire. More immediately ahead of that, I believe the transmitter lies on top of Hazler Hill with a trig point close by (this is on the other side of Church Stretton). 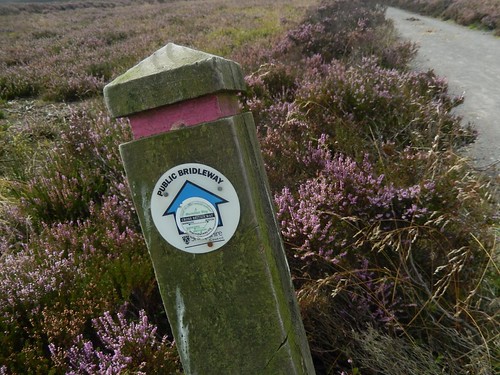 I continued my walk in the direction of Shooting Box. My OS map suggested that I could’ve taken a more direct route to this point, had I note turned right too soon. But I was grateful for that minor detour, as I was soon approaching a rather ominous car park (I always find it strange to see them at the top of hills) with a group of kids or teenagers gathered ahead. With dog walkers beyond, I could see that I was walking within popular territory. 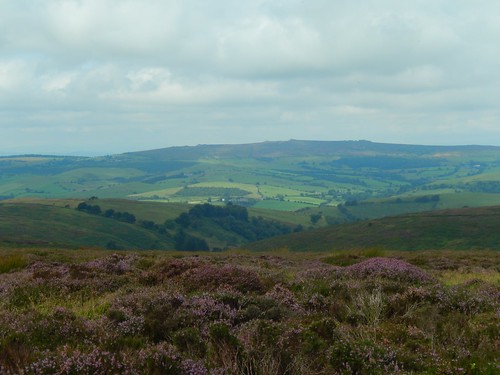 While I could look north-west towards the Stiperstones, I also noticed a waymark for the Cross Britain Way. A route that I do not believe I’d encountered before and, yet, it appears to be different to the popular Coast to Coast walk… How great, that it climbs to the top of the Long Mynd and appears to explore lesser-known parts of the British countryside (avoiding Birmingham, as well). 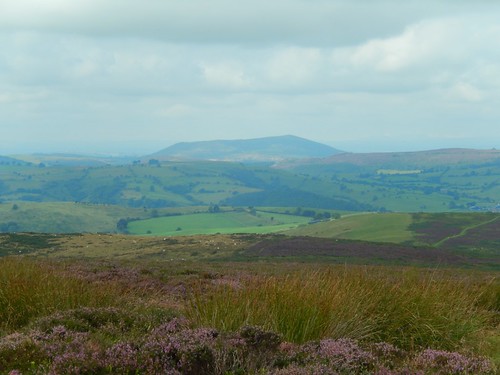 Corndon Hill was as instantly recognisable as ever. 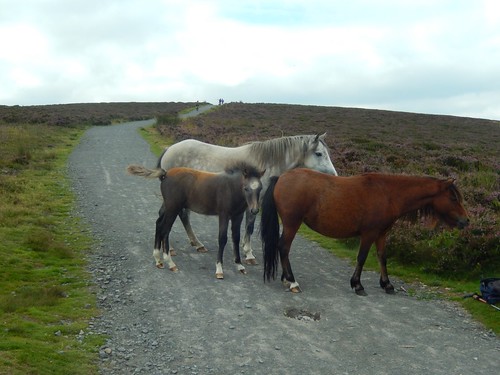 There were some extremely timid horses close to Shooting Box. Psychologically trapped between two photographers (myself and one other). 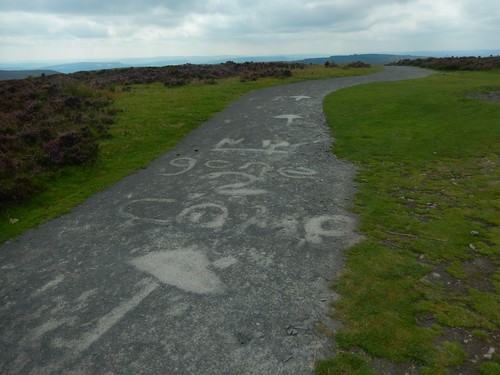 Scraped in to the gravel path ahead was a message that I read as “Gone 2 camp”… Presumably, this was one impatient group member who decided to hurry on ahead of the crowd… Maybe. 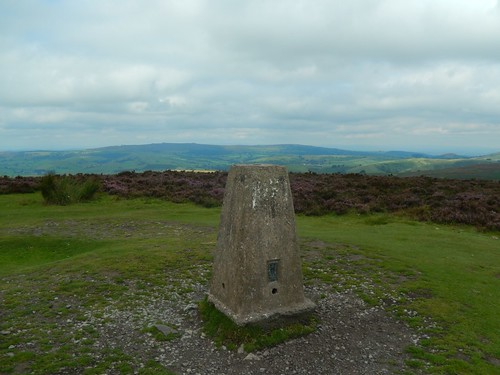 At 516m above sea level, this trig pillar at Pole Bank marks the highest point on the Long Mynd (again, you can see the Stiperstones beyond). 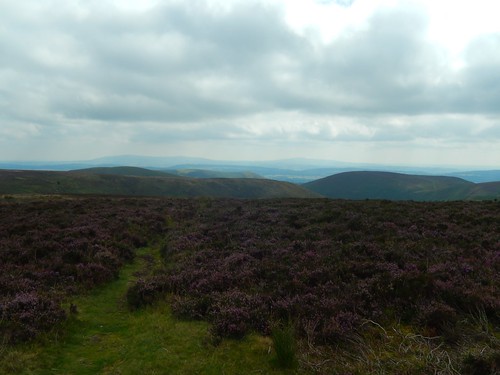 From here, the hills appear to go on to the east – away from Wales… Somewhere beyond, you would find Birmingham (that is, if you really wanted to). 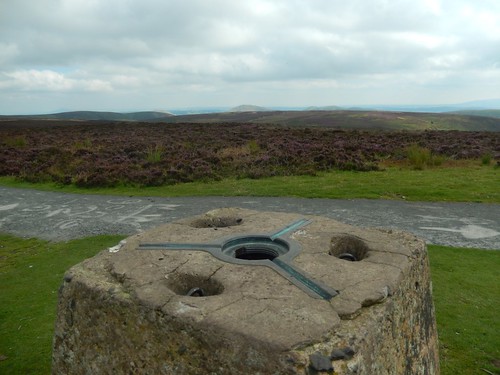 Somewhere along this walk, I’d read notices about how the landscape was being sustained in the hopes of increasing its wildlife population (or, something to that effect). I had never seen or heard so many bees and/or wasps in one area before. They were swarming all around the trig and the surrounding summit. Somewhere, within the bracken, must’ve been their home. 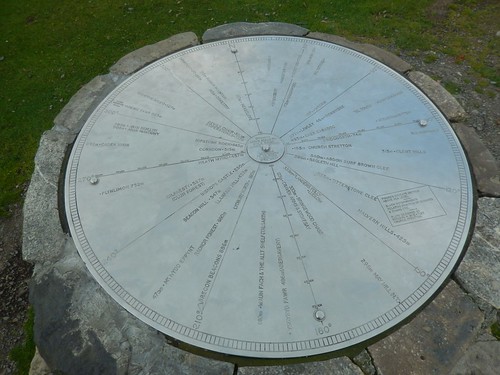 I tried to remain calm for a few minutes, as I took my time with photography. While the constant buzzing was a concern and irritant, I noticed that they were making no attempt to land on me. If I did not attempt to harm them then, surely, they would not harm me. Perhaps they were overly curious (like some cows) or, mildly defensive and wishing to make their presence known.

A few days earlier, I’d seen a short video from a man who’d recently visited Manstone Rock on the Stiperstones, only to be swarmed by hundreds (if not thousands) of flying ants… I felt more comfortable with the bees! 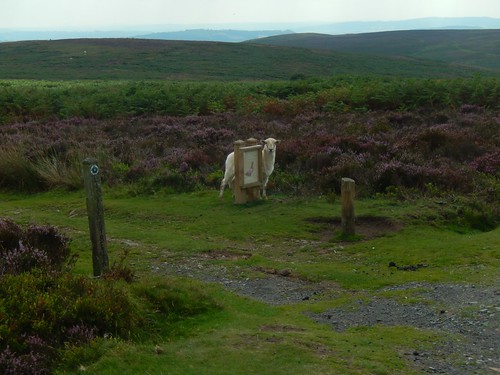 Shortly beyond another car park, I turned left and departed the Jack Mytton Way, where a sheep was cowering behind a sign. Almost ironically, this sign depicted the image of another sheep with a request for dog owners to keep their pets on a lead… I like this approach to getting the message across and making a request. I wonder how many people don’t take any notice of the typical text-only instruction? 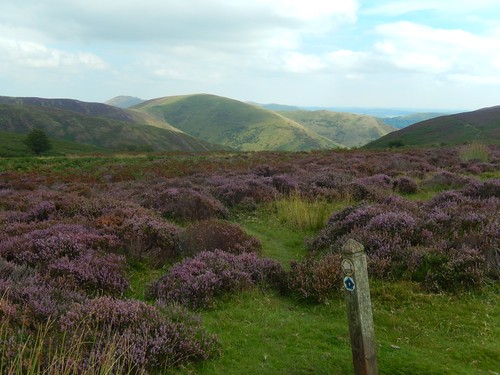 If you were to think that the best of this walk was now behind me, you’d be mistaken, as the views and valleys only continued to grow. 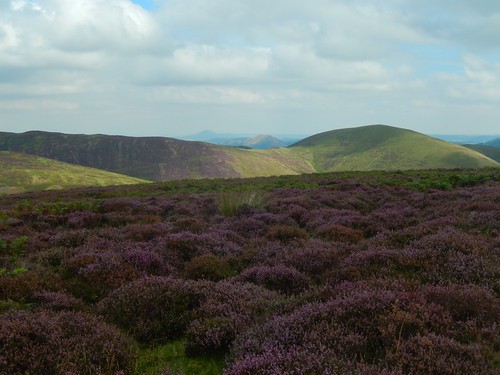 Maintaining height near Round Hill, I believe I could see The Wrekin, some way off and to the north. I do intend to climb it, the next time I visit Shropshire. 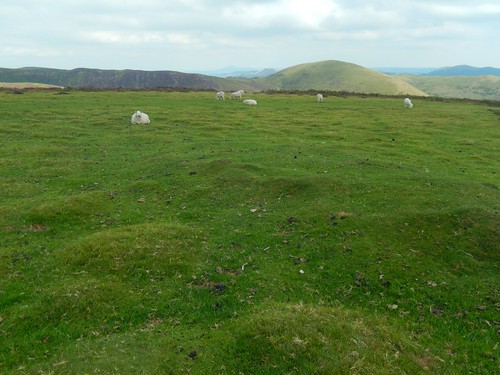 Finding myself away from people and civilisation once more, I chose to stop for lunch before beginning the inevitable descent. Every square metre of this land was littered with poo. Fortunately, I had been carrying my WalkStool (too often, I don’t bother). As I sat down, one sheep crouched down ahead of me. Albeit, some distance away. 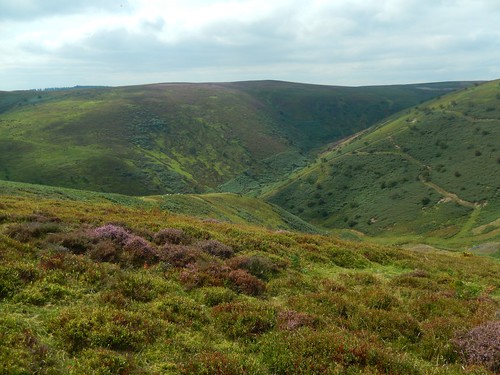 There was little chance of me heading off course up here. I found it easy to navigate my way past Grindle and then down between the hills Nills and Callow. 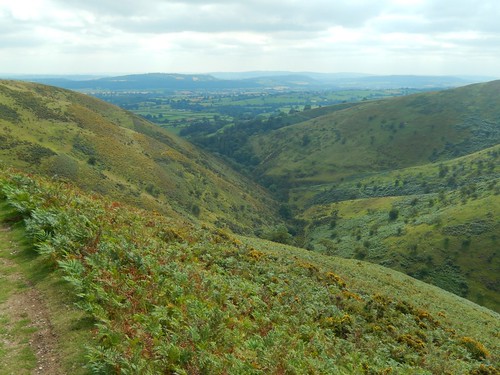 Hopefully, reading through both of my posts, you can now see why I regard this as one of the best walks that I have ever done. 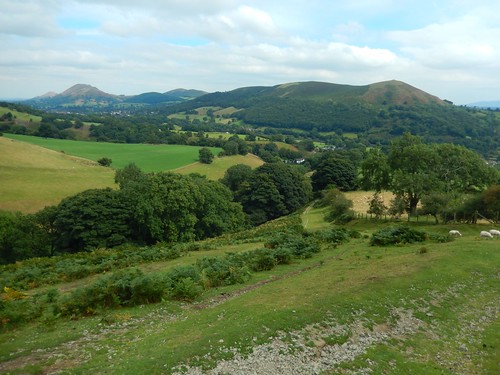 That final descent in to Little Stretton was quite sharp. I was concerned about my left knee and took it slowly, having already equipped my walking pole (I intend to upgrade to a pair of lightweight poles at some point). As I reached a track, I found myself passing the entrance to Small Batch Campsite – I think this one was on my initial shortlist, due to its location. But, I’m glad I didn’t stay here (in August) as it looked very cramped and compact. 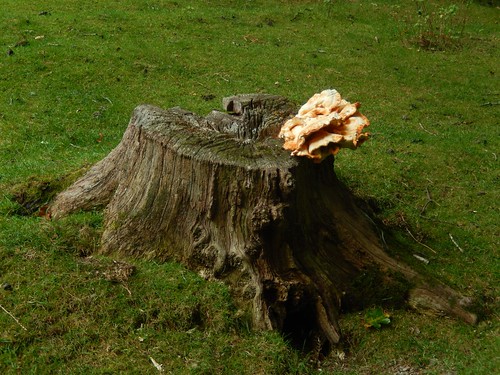 Almost immediately after that – and, quite typical of walking in a hilly Area of Outstanding Natural Beauty – I found myself on a very sharp ascent. Only 25m or so high but, there was no easing in to it. 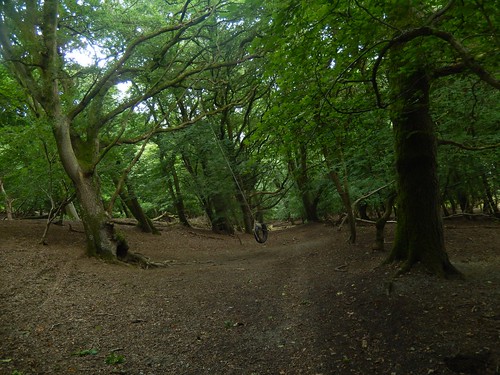 Near The Owlets, my walk began to descend again through woodland, before I arrived at Ludlow Road. 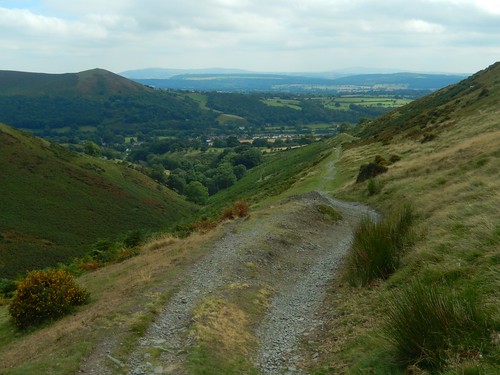 Here, I made the initial mistake of turning right… It was only when I realised I was heading south and leaving Little Stretton that I corrected myself. Still, I managed to miss the narrow lane up to my left of Cunnery Road, which would’ve led me almost directly to the car park (in all fairness, I was distracted/intimidated by an old woman who appeared to be repainting white ‘Give Way’ dashes on to the tarmac…). 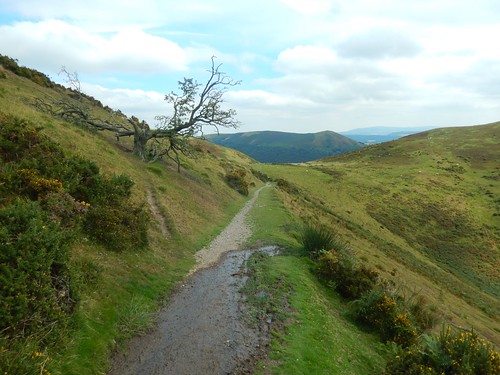 So, I ended huffed and puffed my way up the roads I had driven to get to the start of this walk. While it was hard work, I was pleased that I had no gone wayward at any other point in the walk. 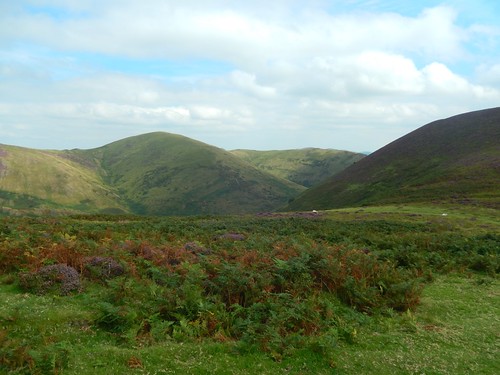 Should you ever find yourself in Shropshire for a day or two, I strongly recommend you go on the Walking Englishman’s walk. It is one I am sure I will treasure for a very long time. I may even do it again, when the time is right.

Total distance of this walk: about 8 miles.

One thought on “Long Mynd and Carding Mill Valley (Part 2)”