It was raining lightly by the time I arrived at the entrance to Ludlow Castle. I can’t remember whether or not I was expecting a ruin of a building to offer some form of shelter but I know I wasn’t prepared to pass on the opportunity to visit and explore. 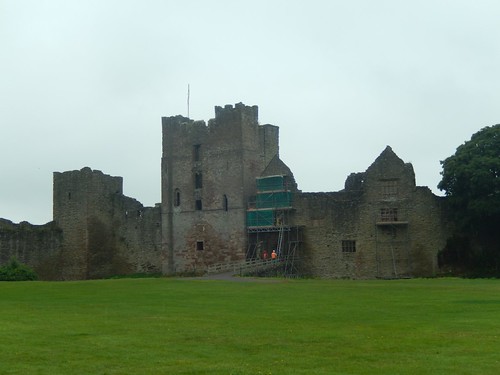 For some reason, I also thought that Ludlow Castle was owned by English Heritage… Perhaps that used to be the case. Or, I could easily have it confused with one of the many other castles around Shropshire.

This castle is actually privately-owned – a lot like Caernarfon Castle, which I visited about one year prior to writing this post. Some private properties charge a horrendous admission fee (Chatsworth House at £25 per adult…). Here, however, I paid a very satisfying £5.

For people feeling a sense of hunger, thirst and wanting to spend more money; there’s even a tea room on the same site (no entrance fee required for that). 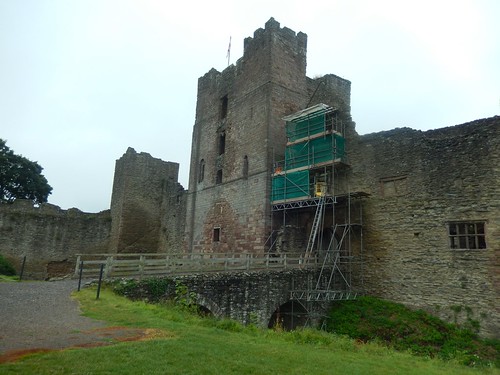 From the minute I set foot on to the grass, I could see that a small portion of the main castle was currently undergoing repair (as it quite a common occurrence). It must be a good 100m walk from the entrance beside the castle town walls to the castle entrance itself. 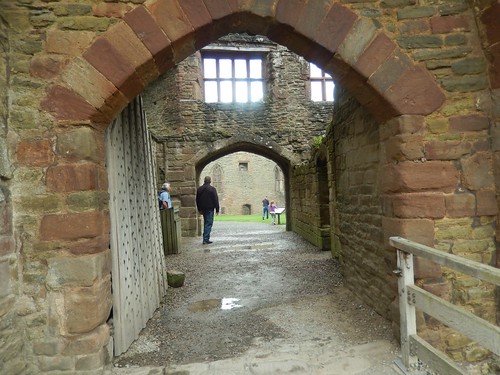 My first impression, upon stepping through the doors, was that it seemed smaller than expected… From a distance, it looks very grand. Although, I would’ve been observing more than just the towering baileys. 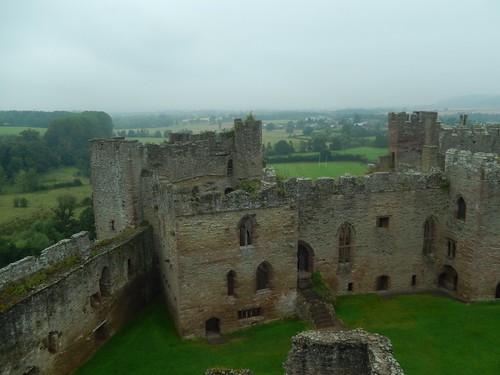 It seemed as though few other people had been deterred by the wet weather. With a visitor map in hand, I almost immediately began to climb steps to my left, on my ascent of the first tower. Typical of many Norman castles, the steps here are narrow and tight-winding. Giving way to and watching out for other people heading towards you is a common challenge. 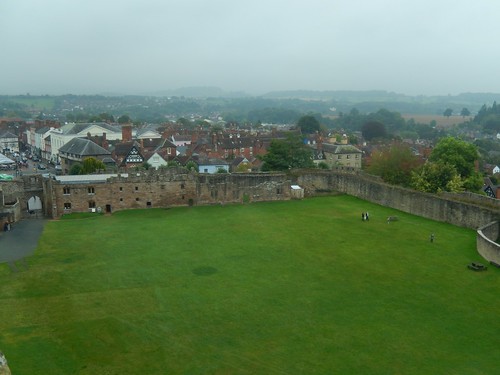 Looking back towards the way I came in, with St. Peter’s Chapel to the right. 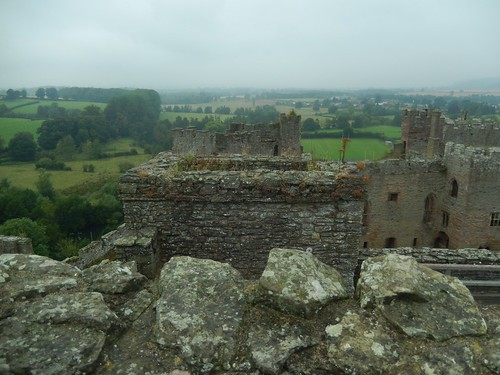 It wasn’t possible to climb all of the towers. You could argue that it might not have been necessary,with colourless skies and a damp atmosphere all around. 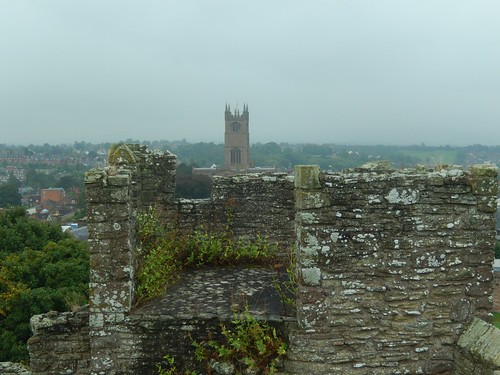 Far beneath me, from the heights of a south-western tower, I could see Dinham Bridge where it crossed the River Teme. 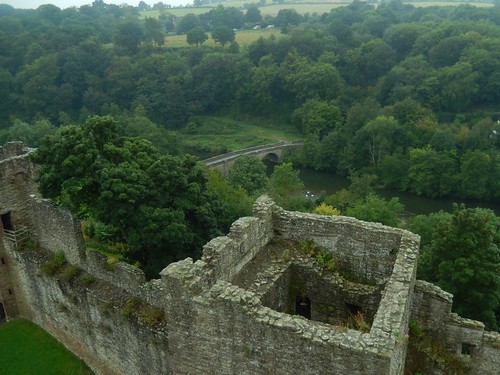 Of course, if you’ve seen my previous blog post about my exploration of Ludlow on this same day; you’ll know that this was my next destination beyond the castle tour. 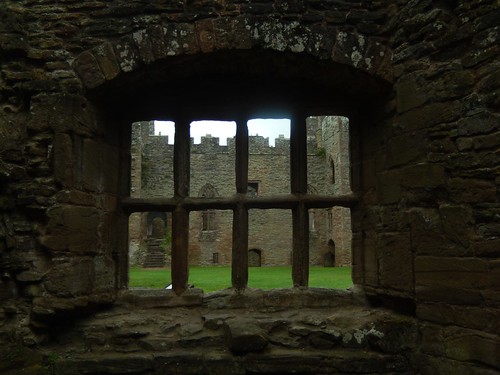 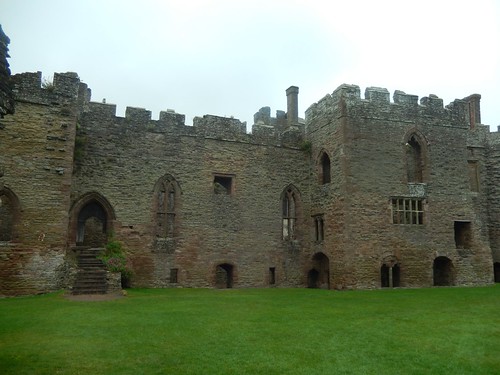 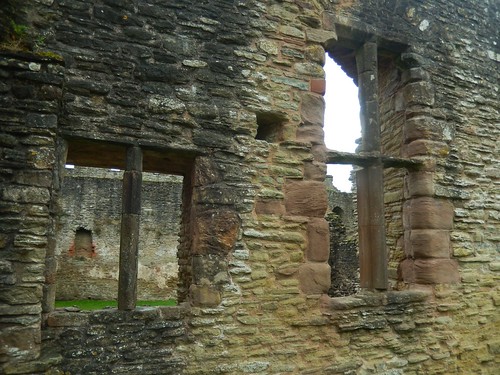 It was interesting to note the different styles of window with an inconsistency featured amongst the walls, every now and again. This could be because the castle has changed hands many times through the centuries. 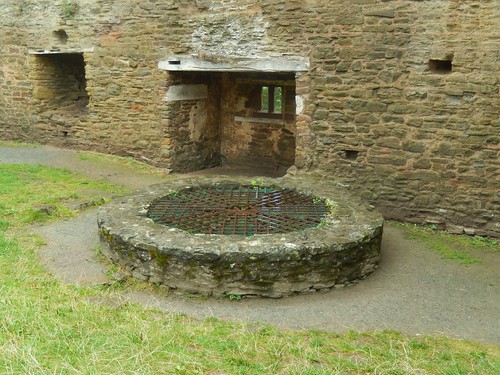 There was a large disused well in one corner. 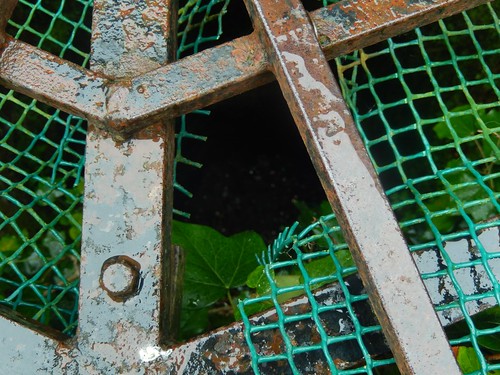 Peering down through a point at which the protective covering had been breached, I could see that it had been used, by many, as a form of Wishing Well… Personally, I prefer to drop a coin in to a volume of water. 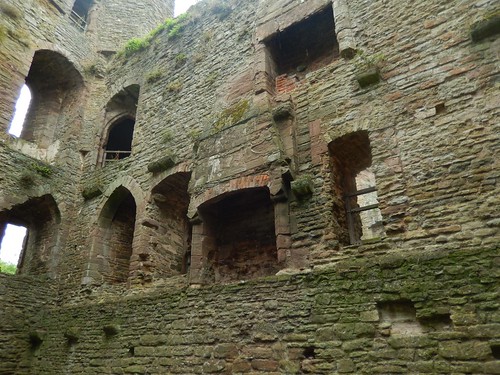 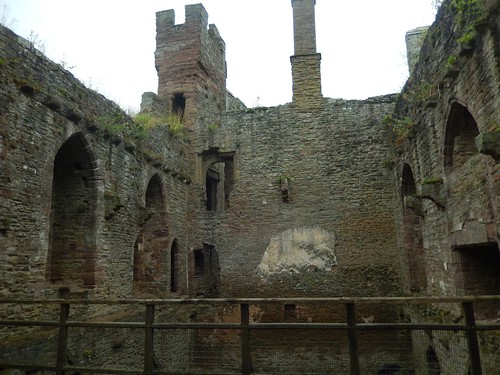 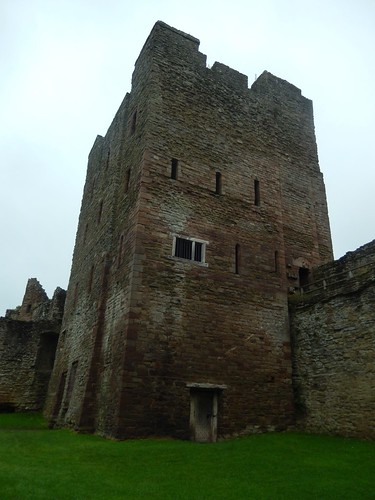 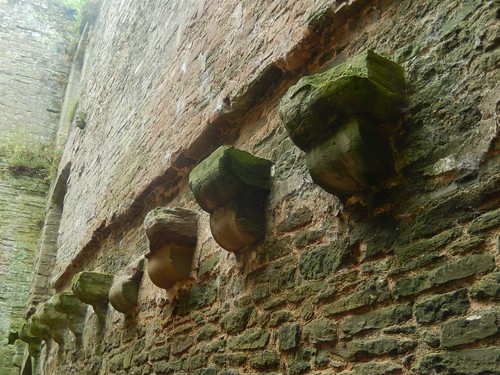 In other places and above doorways, eye-catching brickwork details could be found: 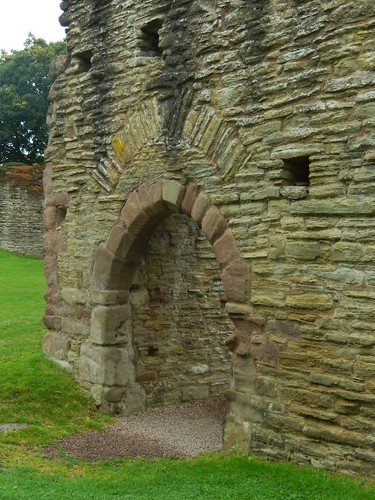 Central to the main castle is the Chapel of St. Mary Magdalene: 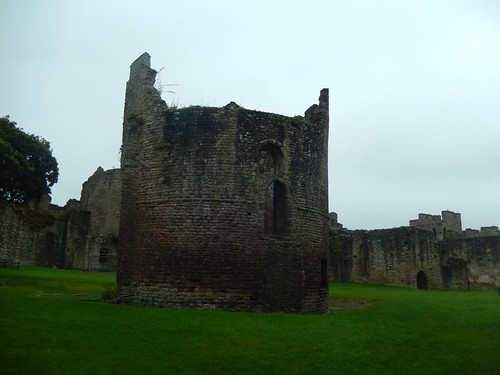 While it has clearly seen better days from its exterior; there was a lot still to be admired from within: 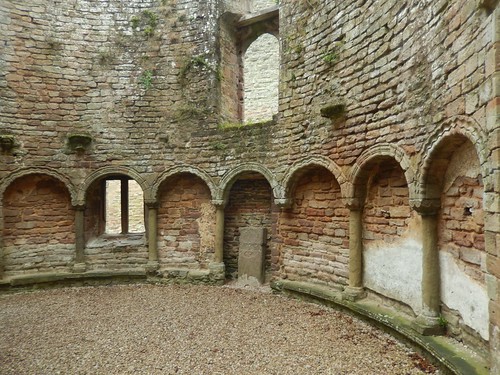 One set of steps elsewhere might lead down to a dead-end wall: 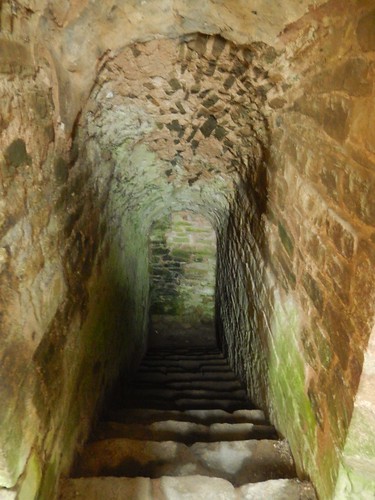 While another set takes you up through pitch blackness to another impassable wall. 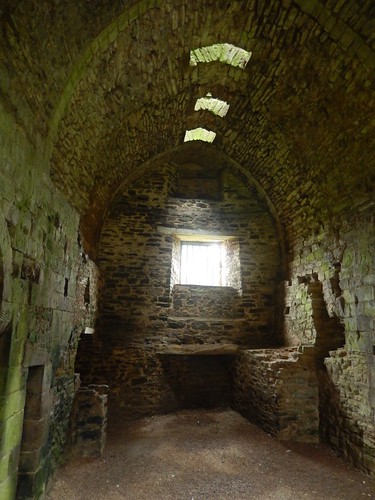 Having spent seemingly enough time inside the castle, I stepped out on to the green again: 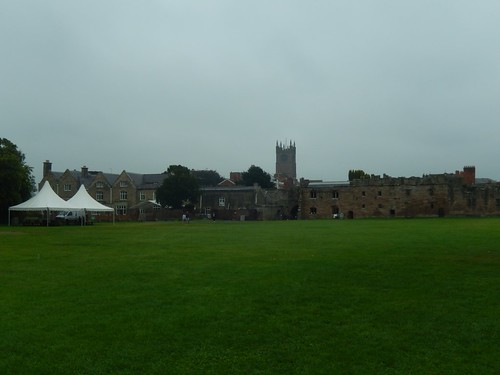 I made my way towards vacant picnic benches beneath shading trees, where others had huddled over to the canopy provided. 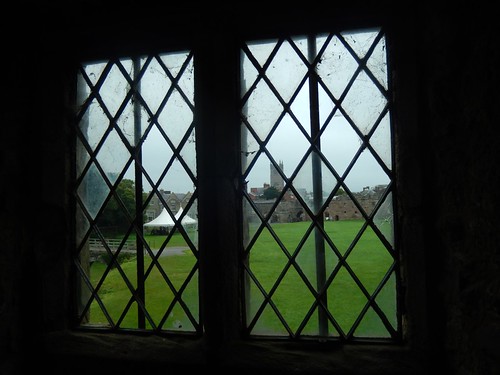 After lunch, I climbed an outer bailey with a small viewing platform at the top. There’s a staircase hidden behind a large oak door (when it’s open), while I was more surprised by the fact that the windows here had been glazed. 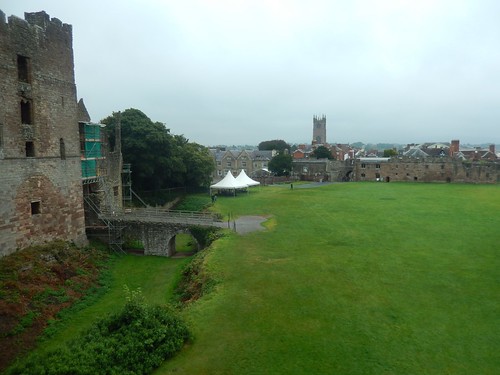 Continuing in a clockwise direction, I dropped down in to the ditch beneath the footbridge crossing. Perhaps this once would’ve been a moat? 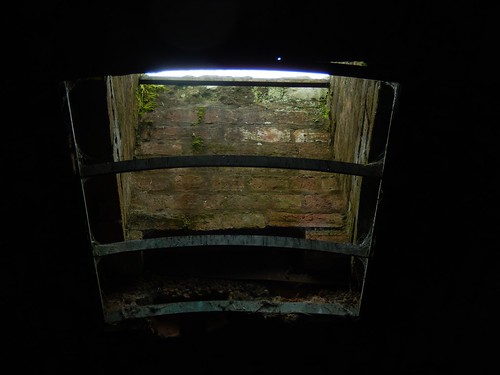 There’s a short chimney or vent stemming up from a room-sized space cut in to the side of the bank. In fact, you can peer down in to the room from the green grass above. Outside of the castle walls, would this have been a prisoner’s cell? 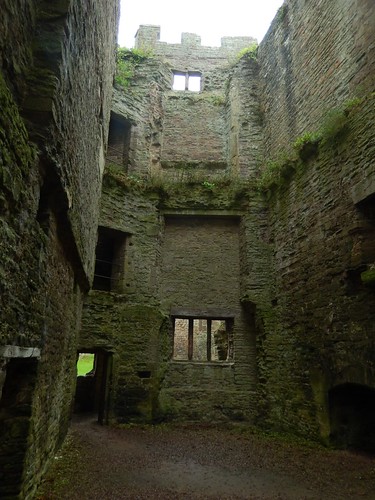 This is a fairly brief summary of my trip to Ludlow Castle; based on the two-month old snippets of memory I can revive. I would strongly recommend you visit this place, given a chance. I hope to return there myself, one day – out of part-curiosity for how my photography may fair on a dry and less dreary day.

If you’d like to see my complete set of (eighty) photos from Ludlow Castle, please click here.